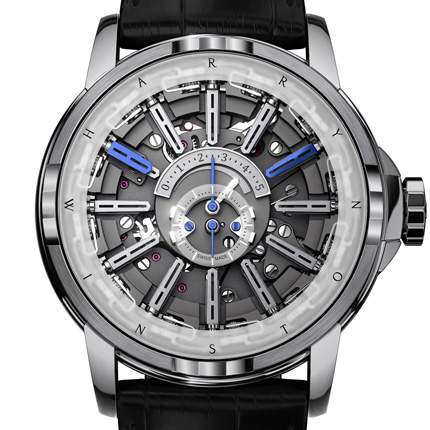 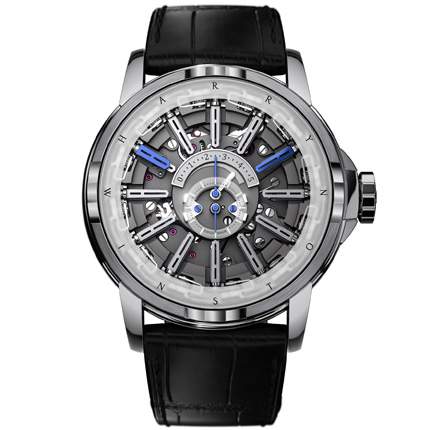 <p><strong>OPUS 12, OVERTURNS TIME</strong><br/><br/>The presentation of the Harry Winston's Opus timepiece is always awaited with great impatience at Baselworld and this year's Opus has what it takes to puzzle those passionate about high complications like never before.<br/><br/>Opus 12 defies the conventional rules of watchmaking, giving birth to the most improbable mechanical concept. This exceptional timepiece deliberately overturns the perception of time by drawing its inspiration from the Copernican revolution according to which the earth rotates around the sun and around itself. Time no longer reads via a pair of hands positioned in the center of the dial, but by the peripheral drive of 12 pairs of hands going from the circumference to the center. The hands, pointed towards the interior draw attention to the center of time. A retrograde hand, synchronized with the main minutes hand, advances along a five-minute sector. At the end of its travel it flies back to its initial position while the long five-minutes hand pivots and sets itself still.<br/><br/>In most watches the evolution of time is imperceptible. Opus 12, on the other hand, goes into action in a remarkable way, its hands changing the guard every five minutes. At each change of the hour, the movement executes a very elaborate drill exercise by the successive rotation of the hands. Below the retrograde indication, a floating small seconds hand graduated on a translucent ring passes above a power-reserve indicator.<br/><br/>The winding of the movement departs from convention. The crown must be turned in the counterclockwise direction to simultaneously wind up the two barrels, one providing energy to the movement and the other, to the animation. In order for the crown to be accessible, it has been placed in the center of the caseband, requiring a transmission wheel that reverses the winding direction.<br/><br/>Opus 12 also breaks the rules in terms of decoration and finish, deliberately abandoning the chamfering used in traditional watchmaking. Shot-peening hardens the surfaces and brings a resolutely contemporary aesthetic. The “Côtes de Genève”, visible through the sapphirecrystal caseback, are for their part interpreted in a spectacular manner. The styling remains faithful to the heritage of the House of Harry Winston. The emblematic arches recall the neoclassical vault which dominates the famous facade of the Harry Winston Salon in New York and the openwork hands, the Manhattan skyscrapers. Another feature of this Opus 12 is the absence of a traditional dial, which channels attention towards the indications and the animation and confers a mysterious character to this exceptional piece.<br/><br/>The Opus 12, which reinterprets time, is a real innovation in watchmaking. Nothing like this has been done before. The idea has sprung from the mind of its creator, Emmanuel Bouchet, who developed this remarkable work in close cooperation with the designer, Augustin Nussbaum, and the House of Harry Winston.</p>