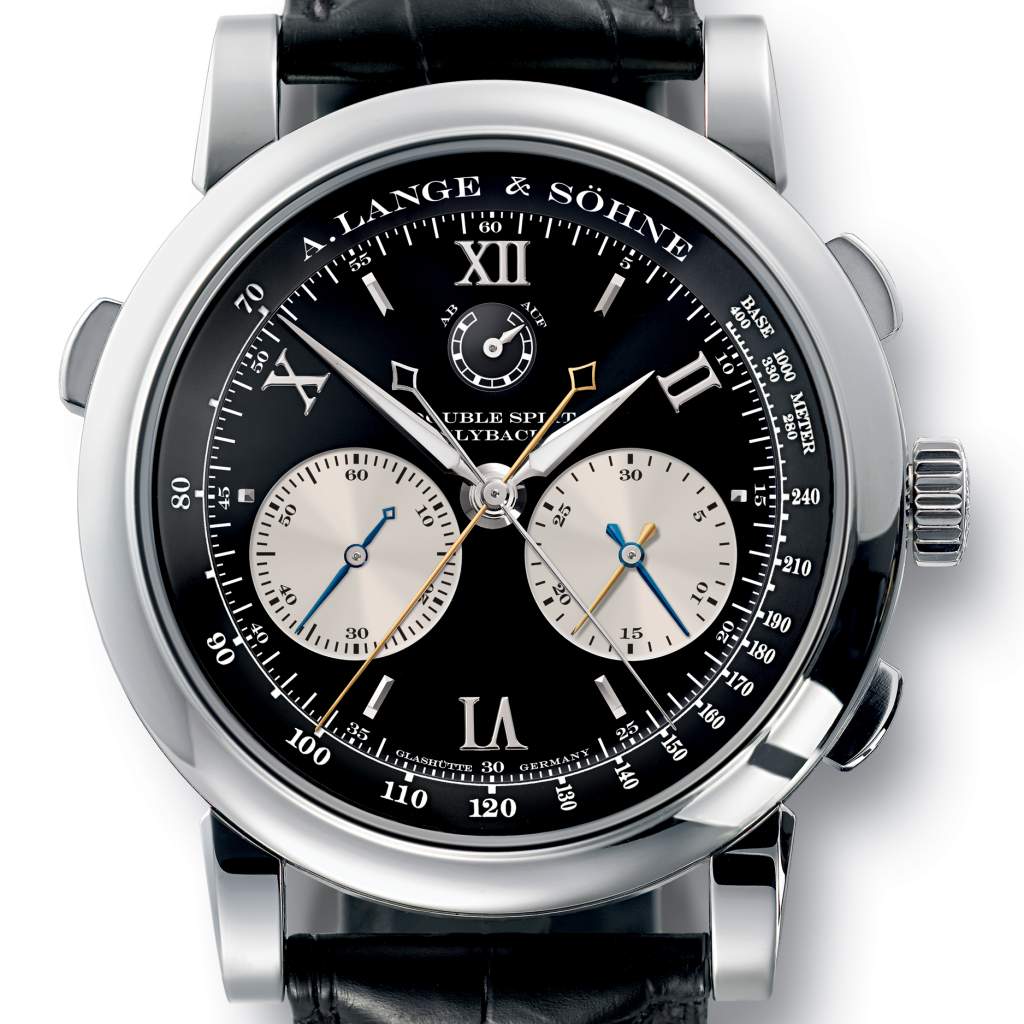 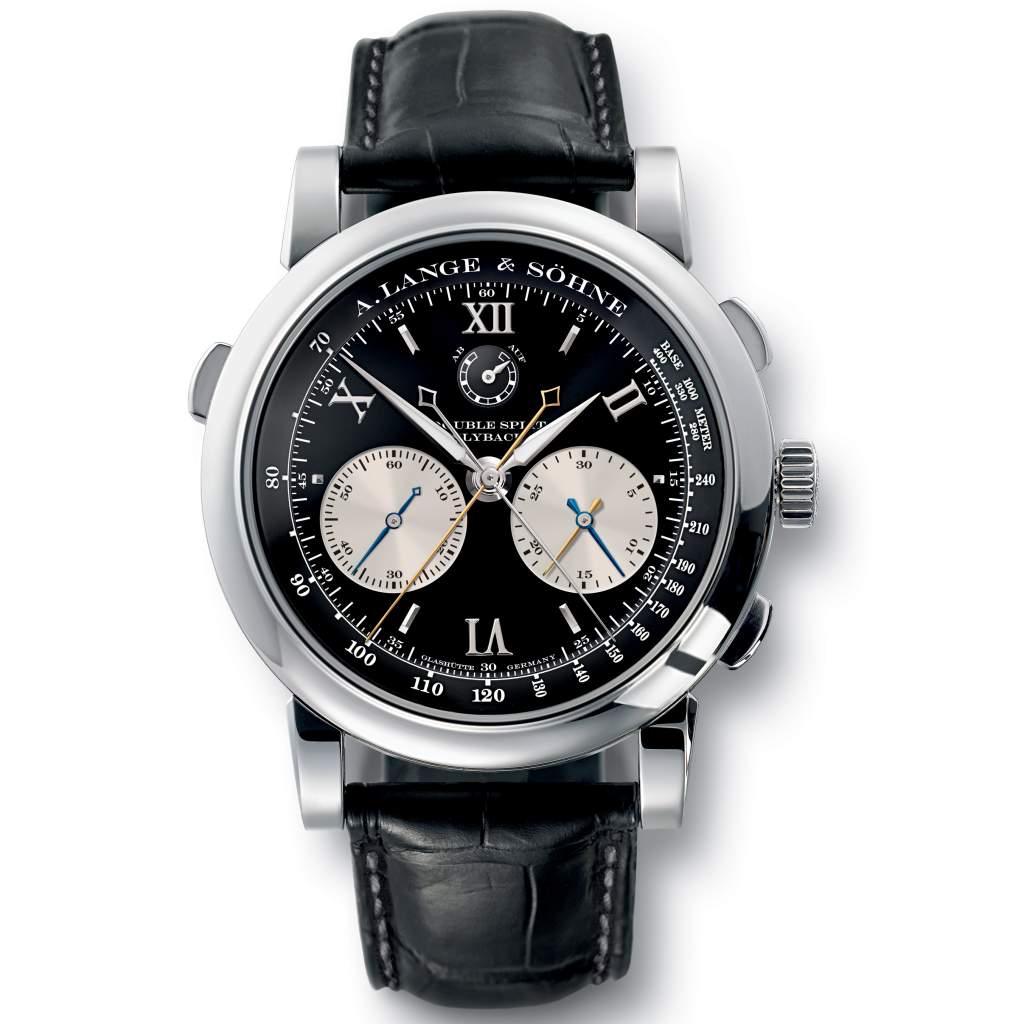 The new era of chronography has begun

"A. Lange & Söhne" has just liberated the rattrapante chronograph from its confinement to 60-second lap times by creating the first genuine double rattrapante for the wrist. The new LANGE DOUBLE SPLIT is absolutely peerless, because it not only has one, but two rattrapante hands  one for the seconds and one for the minutes to be stopped. What's more, both chrono hands and both rattrapante hands are flyback hands.

The new era of chronography has begun: "A. Lange & Söhne" has extended the functionality of the "watch in the watch" by a fascinating dimension. The intricate complication of a rattrapante sweep-seconds hand in a chronograph has always been an awesome horological accomplishment for short-time measurements. From the very beginning, it was admired as a milestone in precision engineering, but alas, it had its limits. Unfortunately, the possibility of taking a lap-time reading with the rattrapante sweep-seconds hand during an ongoing measurement was restricted to the 60-second scale and thus to laps of less than one minute.

Now, this limitation has been overcome. The "watch in the watch in the watch" has become reality. In the new LANGE DOUBLE SPLIT, the principle of the rattrapante sweep-seconds hand has been extended to the jumping minute counter. This means that for the first time ever, comparative lap measurements of up to 30 minutes  in Formula 1 races, to name but one example  are now possible in a classic, purely mechanical wristwatch.

Also, the act of measuring a lap time does not have to be at the expense of a loss of amplitude when the chrono sweep-seconds hand continues to revolve while the rattrapante sweep-seconds hand is stopped. This is prevented by a disengagement mechanism developed by "A. Lange & Söhne", for which a patent registration has been filed.

Once is good, but twice is better

Several years of hard work in the development department of the Lange manufactory are behind these complicated technological innovations. The new LANGE DOUBLE SPLIT was inspired by the technical refinements once before integrated in a Lange double-rattrapante pocket watch that dates back to the late 19th century. This latest chef-d'oeuvre also spawned the self-confident maxim of Lange's engineers: Once is good, but twice is better.
Buoyed by the success story of the DATOGRAPH that began five years ago, the engineers systematically evolved an already ingenious timekeeping instrument to create an incomparable masterpiece: A 220-gram power pack of horological artistry in a platinum case with a diameter of 43 millimetres. And they endowed this latest juncture in the history of watchmaking with all of the major innovations and complications that since then have been devised at the Lange manufactory in Glashütte. This includes a new balance wheel developed in-house by Lange. Designed for a frequency of 21,600 semi-oscillations per hour, it is equipped with eccentric poising weights instead of inertia screws. It is powered by a top-quality balance spring which was also developed in-house by Lange and is manufactured on site. It, too, features a technical novelty: It is not attached to a hairspring stud but instead is secured by a balance-spring clamp for which a patent registration has been filed. This clamp perceptibly simplifies the future poising work of the fortunate watchmakers to whom the LANGE DOUBLE SPLIT will one day be entrusted for servicing. Detailed innovations of this kind have always been typical for Lange in the past and will remain Lange hallmarks in the future.

Since it was festively inaugurated in the late autumn of 2003, the manufactory's new Technology and Development Centre has been pursuing the kind of fundamental research that Richard Lange, the oldest son of company founder Ferdinand Adolph Lange, embarked upon in 1930 with his patent No. 529945 concerning a "metal alloy for balance springs", an invention that since then has found global acceptance. He discovered that the sensitivity of hairsprings to temperature fluctuations could be reduced and their flexibility enhanced with the addition of beryllium. Today, Lange is one of only a few companies in the world that master the latest-generation processes needed to manufacture balance springs, which are used for the new Lange movements.

All these assets are embodied in the LANGE DOUBLE SPLIT, a very special and exclusive horological accomplishment. The best way to understand the beauty and complexity of such a breathtaking precision mechanical universe is to describe its functions:

With its manually wound calibre L001.1 movement, the LANGE DOUBLE SPLIT is first and foremost a watch that indicates the hours and minutes on its two-tiered black solid-silver dial, the seconds on its silvery subsidiary dial on the left-hand side, and the power reserve with an indicator beneath the Roman "XII". The small seconds dial, the also silvery 30-minute counter dial of the chronograph on the right-hand side and the up and down indicator constitute the corners of an equilateral triangle, a typical characteristic of the architecture of Lange dials.

The chronograph function: When the owner presses the start/stop push piece of the chronograph, subtly rounded to accent the classic circular case, the LANGE DOUBLE SPLIT becomes a "watch in the watch". This action sets the slender gold-plated chrono sweep-seconds hand in motion. When the same push piece is pressed again, the hand stops. When the zero-reset push piece at 4 o'clock is pressed, the sweep-seconds hand returns to the 12 o'clock position.

The flyback function: While the chronograph mechanism is running, both chronograph hands can be instantly reset to zero by pressing the push piece at 4 o'clock. When this push piece is released, the chrono sweep-seconds hand restarts immediately. Its minute counter will advance by one marker precisely one minute later. This so-called flyback device makes it possible to initiate a new measurement without delay. With simple chronographs, the same effect requires the actuation of the start/stop push piece to stop the hands the actuation of the zero-reset push piece to return the hands to the home position, and the renewed actuation of the start/stop push piece to start the next measurement. The flyback mechanism bundles all of these interventions into one actuation. The idea for this mechanism dates back to an epoch in which pilots needed to co-ordinate speed, rudder position, and time to fly curves, and fast reactions were needed.

If more than two consecutive measurements are to be made after the hands have been collectively set in motion, the following procedure must be observed: The first lap time, stopped with the rattrapante push piece, must be memorised or written down. The renewed actuation of the push piece causes the rattrapante sweep-seconds hand to instantaneously catch up with the still-running chrono sweep-seconds hand. This process can be repeated as often as desired, as long as the chrono sweep-seconds hand is in motion and the aggregate time measurement has thus not been interrupted.

Fastest/slowest lap measurement: Technology buffs will appreciate another function that allows the identification of minima and maxima  the fastest or slowest lap of all laps measured, for instance. To determine the fastest lap of a series, the first lap is stopped with the pair of rattrapante hands, the second with the pair of chronograph hands. At this point, both times need to be compared.

Conversely, to determine the slowest lap, the rattrapante push piece must be pressed twice if the time measured by the chronograph hands is greater. In both cases, the value displayed by the rattrapante hands at the end of a series of measurements is the extreme (maximum or minimum) of all stopped times.

This makes the habitual use of the fascinating and very practical rattrapante function a delight that entails no regret, all the more as most of the complex mechanisms of this mechanical marvel can be admired through the sapphire-crystal caseback. It is hardly disputable that the LANGE DOUBLE SPLIT will push the emotions of connoisseurs around the world quite far up on the open-ended enthusiasm scale.