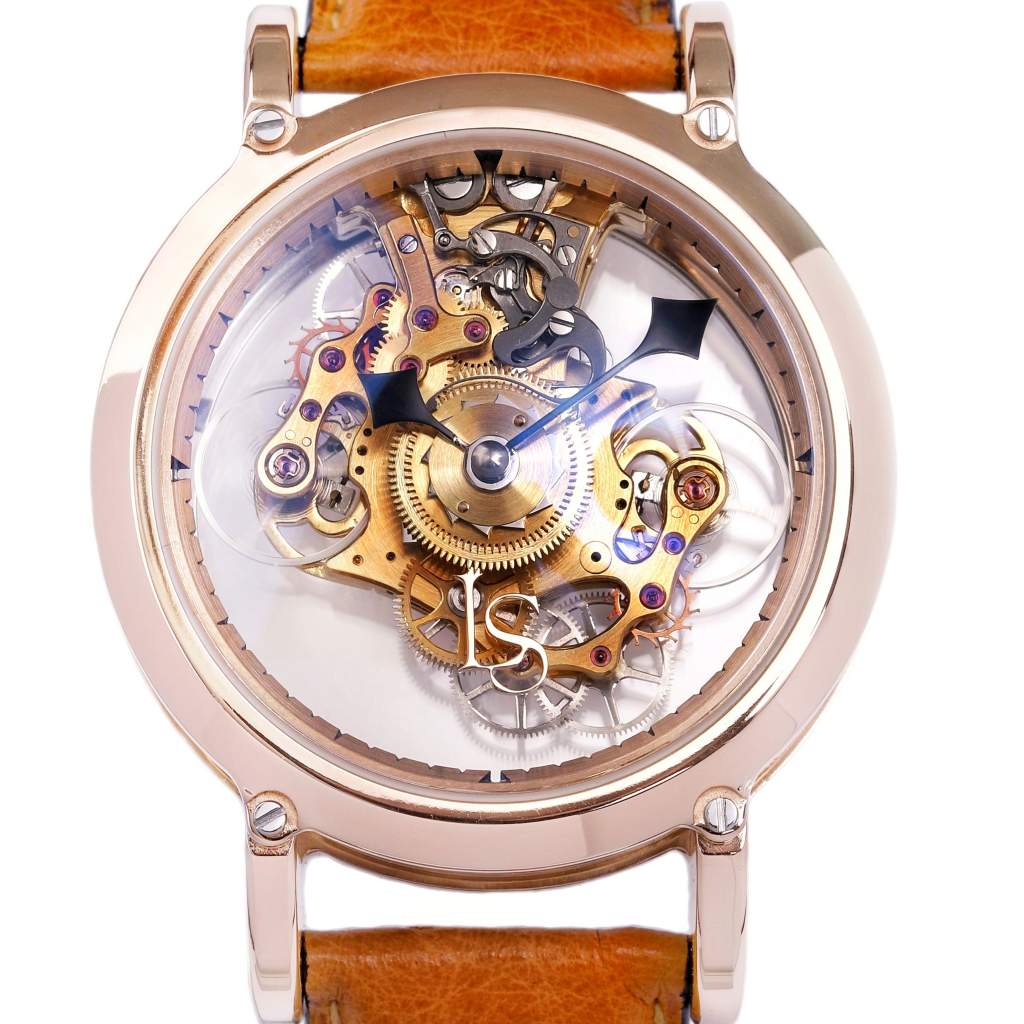 Ludek Seryn studied horology, then expanded his portfolio of artisanal skills with goldsmithing, jewelry, and stone-setting. Karel Rotation is the watch that Seryn worked on day in and day out for two and half years.

There’s a reason for the unusual name that I will explain below.

It took about 1,000 days of hard work to realize a seemingly unrealistic vision. Completely independently at his workshop in Prague’s Vinohrady quarter, Seryn created a mechanical steampunk timepiece with an innovative movement design.

Of the 264 components making up Karel Rotation, Seryn produced 75 percent of them – without the use of CNC machinery. The other 25 percent of the components, including the hairspring, mainspring, and bearing jewels, were outsourced to specialists; however he then hand-polished and beveled many of these outsourced parts to the high standard he thought his watch deserved.

The fully functional prototype already has an owner: a Mr. Karel (Karel is Czech for “Charles”), the first name of the client. But this patron is not just a client: he helped Seryn with the financing and preparation of a possible small-scale production.

With the Karel Rotation, Seryn has crafted a new kind of manufacture movement with original architecture using a rotating base (hence the word “Rotation” in the watch’s name) and two independent movements sharing one spring barrel. The entire movement is supported on a single shaft around which everything else revolves like planets around the sun – including the spring barrel, plates, automatic winding assembly, and even the hands.

The owner witnesses the rotation three times each day as the movement makes one complete rotation every eight hours – an interesting way to measure work time?

The Karel Rotation has a power reserve of a 42 hours. Both of its old-school 2.5 Hz balances and their gear trains (two escape wheels, two second wheels, two intermediate wheels, and two minute wheels) share a single spring barrel. Though this is an interesting construction, it is also a challenging one as both oscillators must be tuned absolutely perfectly.

The dual movements – exuding symmetry and harmony – are entirely dependent upon one another.

In his attic studio overlooking the beautiful city of Prague, Seryn first developed innovative models of his parts in a ratio of 8:1 with a 3D printer.

Although this made the construction work on his in-house complicated movement easier, nothing about designing the movement was simple.

Designing and manufacturing the wheels and gears as well as a custom mechanism to control the hands took time, though the gear train and escapement is from the Czech classic Prim Caliber 66. Seryn had already used the Caliber 66 in his Carabus watches, Skeleton Tonneau, and Skeleton Round.

Seryn’s automatic movement, which cannot be wound manually, uses a sapphire crystal oscillating weight with a heavy platinum segment occupying half of the periphery of the transparent disk.

Setting the time is done by a leveraging mechanism, using a key Seryn crafted at the 12 o’clock position where there is a corrector with a triangular profile (the client can of course modify the shape according to his or her wishes).

Moving the corrector to the right and into its first position pushes the minutes forward, while in the second position they can be set backward. Shifting the key to the left in the corrector slot moves the hours forward or backward, which is wonderfully observable from the front due to the skeletonized nature of the movement and nonexistent dial – the charcoal black lever shaped like a “devil’s tail” moves the visible central gear with 12 teeth.

A unique movement requires an appropriate case, and the generously sized 45 mm case of the Karel Rotation allows room for appreciation of this piece of mechanical kinetic art from almost every angle.

The gold frame of the case is completed by glass produced in the Czech Republic: while the front and the back components are conventional sapphire crystal, the sides comprise a custom-blown ring of mineral glass.