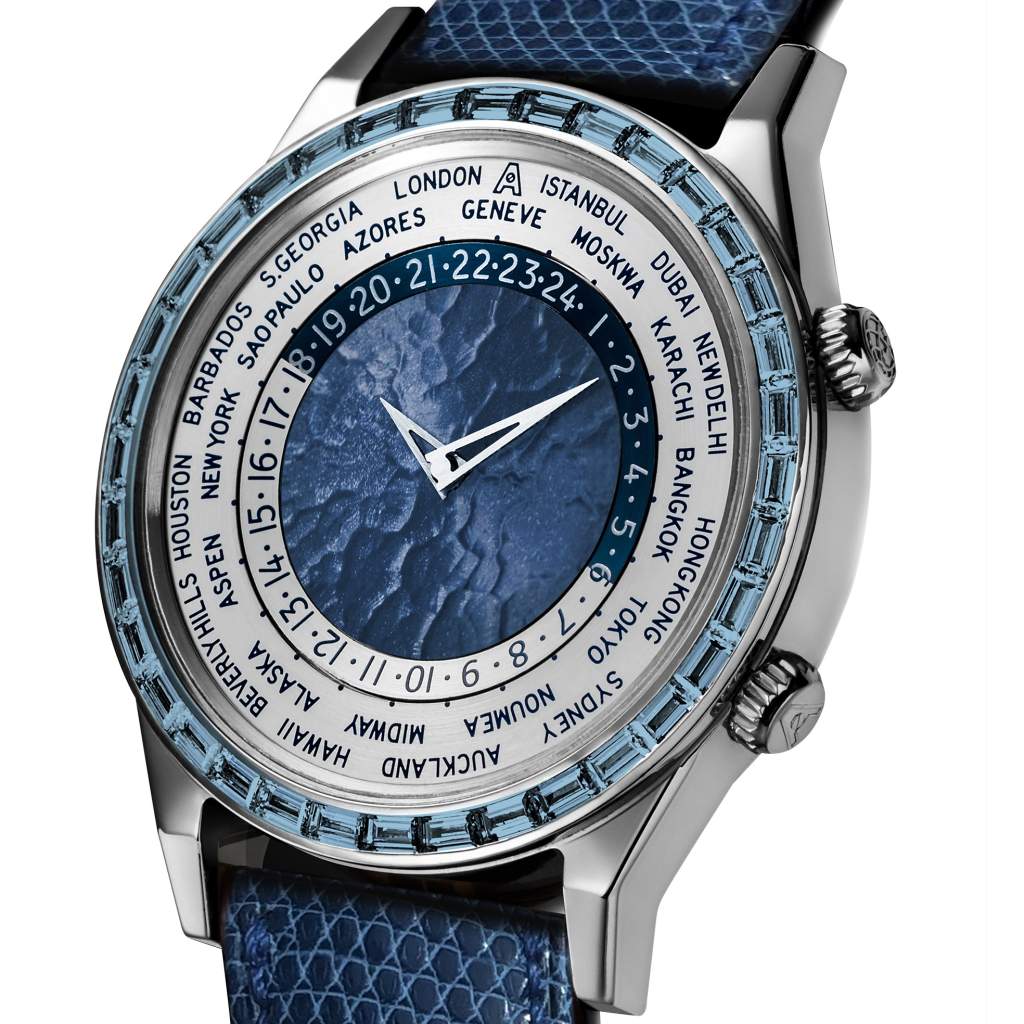 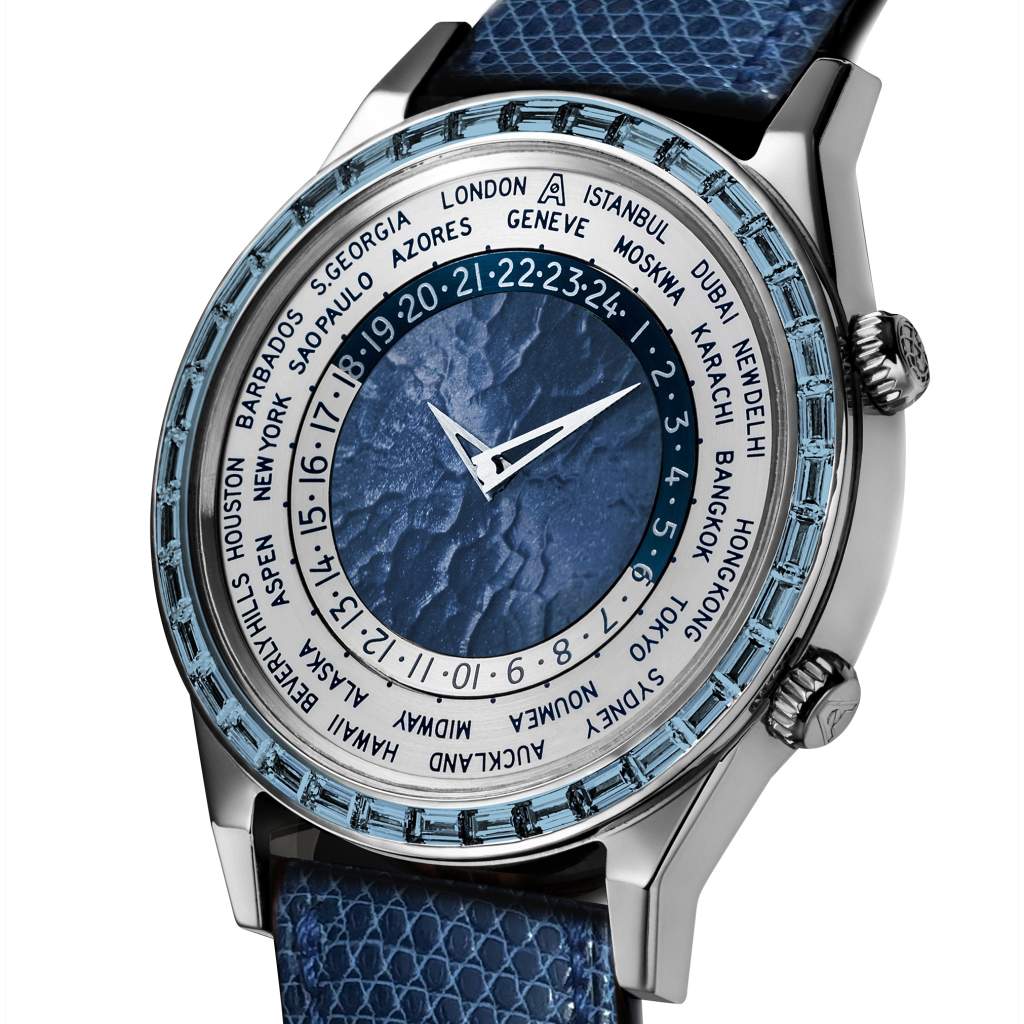 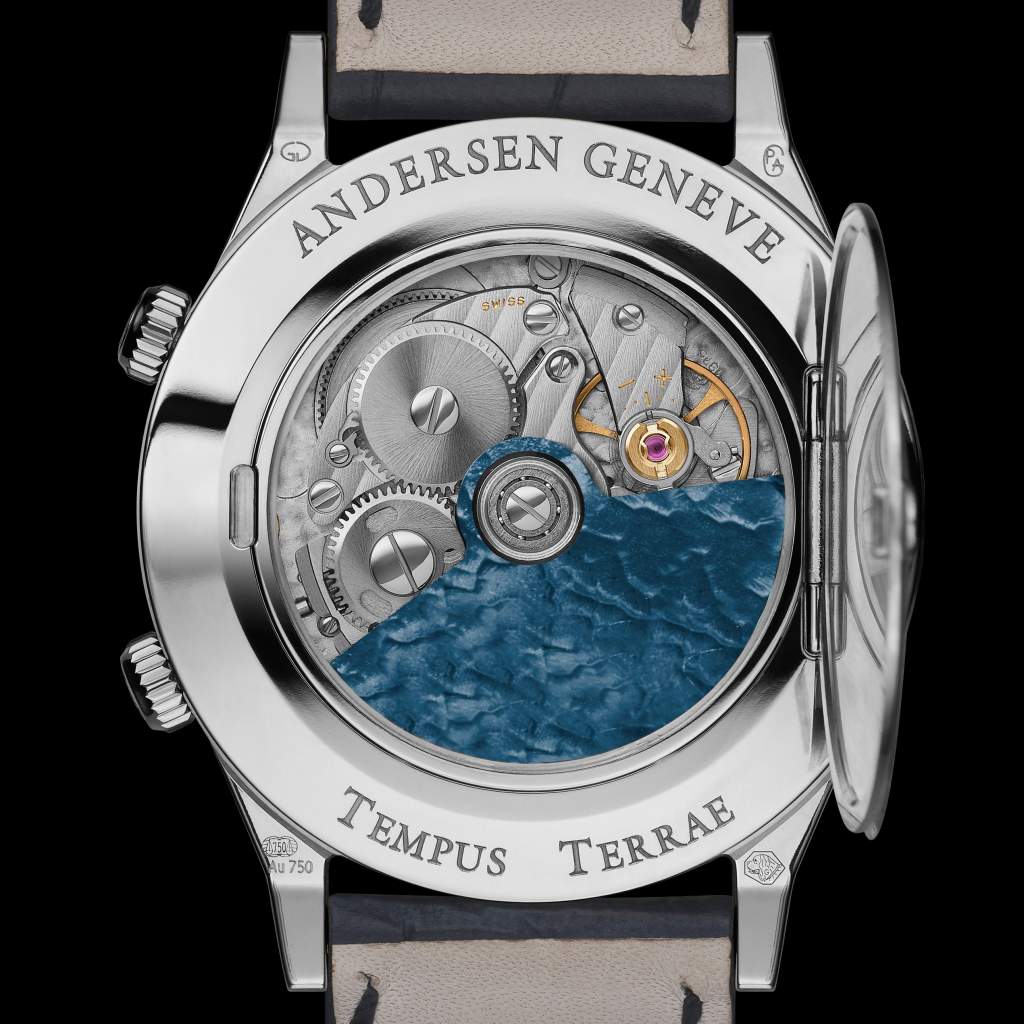 For 2022, ANDERSEN Genève revisits its most cherished complication, the Worldtime, with an exquisite blue-toned, gem-set take on a modern classic.

For ANDERSEN Genève, the renowned maker of bespoke watches and ultra-limited editions, the Worldtimer is a longstanding cornerstone of its watchmaking, and a dazzling platform for its artistry and craft. After two years in which ANDERSEN Genève’s Jumping Hours watches were to the fore, 2022 sees the company returning to its worldtime roots with a magnificent, gem-set version of its iconic Tempus Terrae, among the most elegant and distinctive examples of the Worldtime complication ever made.

ANDERSEN Genève founder Svend Andersen developed his expertise in worldtime watches while working in the Grand Complications Workshop of Patek Philippe in the 1970s. In 1990, a decade after founding his eponymous Atelier, he produced his debut Worldtimer, the Communication 24 – a stunning watch inspired by Louis Cottier, inventor of the complication in the 1930s.

Since then, ANDERSEN Genève’s numerous worldtime models have been celebrated by Collectors worldwide for their elegance, ingenuity and finesse. Most recently, a limited edition of 10 ‘Celestial Voyager Sunset over Cappadocia’ watches made in collaboration with Benjamin Chee Haute Horlogerie (BCHH), featured bespoke cloisonné enamel dials, each of which was unique.

For 2022, ANDERSEN Genève presents a new edition of the acclaimed Tempus Terrae Worldtime, first introduced in 2015 and featuring the brand’s in-house Worldtime module. As always, technical perfection is paired with matchless decorative craftsmanship. This watch features a bezel decorated with exquisite and flawless blue baguette gemstones, Aquamarine gemstones. There are 36 perfectly cut Aquamarine stones weighting a total of 2.25ct, set into the graceful Tempus Terrae case in white gold. Notable for its angular ‘broken’ lugs and dual crowns (a tribute to Cottier), the case is sumptuously polished and finished by hand with polished/brushed parts. The hunter case back is disclosing the movement and the 21ct BlueGold Tapisserie guilloché motif rotor. Hand engraving options inside or outside the back cover are offered to Collectors.

The first crown with "A" logo will set the time (minutes and hours) while the second one with a "TT on a globe" logo will be used to set the reference time zone, i.e. the corresponding city, where the user is currently.

The sparkling light blue of the Aquamarine matches that of the central dial of the 21ct BlueGold, itself an ANDERSEN Genève calling card, hand-engraved with an undulating Tapisserie guilloché motif. To achieve 21ct BlueGold, 24ct gold mixed with iron elements is treated at a specific temperature and pressure. Then, after Tapisserie guilloché has been crafted a delicate heating process is required to obtain its blue colour. In this completely artisanal process, no two dials emerge from the oven with quite the same tonality, making every dial unique. The pairing of the textured 21ct BlueGold dial and a bezel of shimmering Aquamarine blue gems is nothing less than captivating.

ANDERSEN Genève logo was removed from the centre of the dial and replaced by the "A" logo on the outer ring of the dial, the so-called "City Ring". Brushed "A" shaped Andersen hands are also part of ANDERSEN Genève’s DNA; they remain as discreet as possible to give a clear visibility of time.

Every millimetre of the watch is worked to a perfect finish; turn the watch over, and this proves to be true of the movement also, with every component textured, decorated and polished using traditional handcraft techniques. From the hand-chamfering and mirror-polishing of the ratchet and crown wheels to the delicate snailing of the winding mechanism and the flawless gleam of the tiniest wheels, each of which are individually tumbled, it is a movement to delight connoisseurs and Collectors with its incredible artistry and attention to detail.

Svend was already well known by Collectors worldwide, thanks to his outstanding achievement: “The Bottle Clock” in 1969. In 1980 a Swiss Collector asked him to re-construct and make a new gold case for a very complicated pocket watch movement from Louis Audemars. He did it and more and more Collectors arrived with such demand. So, he started his career as independent watchmaker by first manufacturing pocket watch cases, with harmonious styles, for Collectors. Satisfied with the high quality of the work, watch Collectors started to ask for their personalized and bespoke time piece (called “Pièce Unique”). Ever since, ANDERSEN Genève has been developing complicated watches such as the annual calendar, perpetual calendar, and fly back date calendars. One of ANDERSEN Genève’s most complicated watch developed is the Secular Perpetual Calender. It is a watch that accommodates a quirk of the Gregorian Calendar; three secular years, not divisible by 400: 2100, 2200 and 2300 and are not leap years. In these years’ regular perpetual calendars require manual correction, for e.g. it doesn’t need an extra day in February (there is no “29”). The complication developed by ANDERSEN Genève will show the date without adjustment every year up to and beyond 2400. In 2022 it is still the one and only wristwatch with a calendar that needs no adjustment for 400 years!

While working at Patek Philippe in the early 1970’s, Svend had the chance to work on the world time complication developed by the Geneva based watch maker Louis Cottier. Mr. Cottier created the first pocket watch in the 1930’s and then the first wristwatch with an indication of different time zones. In commemoration to Louis Cottier’s first world time wristwatch, ANDERSEN Genève designed its first World time watch in 1989, the “Communication”. It was a great success and the watches were delivered to watch Collectors in 1990. Followed the “Christophorus Colombus”, the “Mundus”, the “1884” and the “Tempus Terrae” series of world time watches and “Pièce Unique”. World time watches are indeed part of Andersen Genève’s DNA.

Other ANDERSEN Genève’s iconic timepieces are the collections of Automaton’s watches and Montres A Tact.

Automaton’s Collection being famous with Eros watches that carry the most complicated horological automaton ever made. It also offers its owner endless personalization possibilities on the automaton and the dial of the watch or for the scene. This collection also carries the Automaton JOKER that is a collaboration between the outstanding Russian watchmaker Konstantin Chaykin and ANDERSEN Genève.

Montre A Tact timepieces have 2 reading time windows; one being on the case of the watch between the lugs so that its owner doesn't need to turn his wrist to read time. The complication developed in house is added on a vintage high-quality automatic movement upgraded by ANDERSEN Genève. This watch doesn’t have hands on the dial and offers a wide range of personalization from hand painted scenes to any type of hand guilloché, hand engraving or precious stones. Portraits, coat of arms, miniature painted or hand engraved scenes have been realized with the help of master craftsmen of their respective fields.

Every component is designed, developed and manufactured in Switzerland.