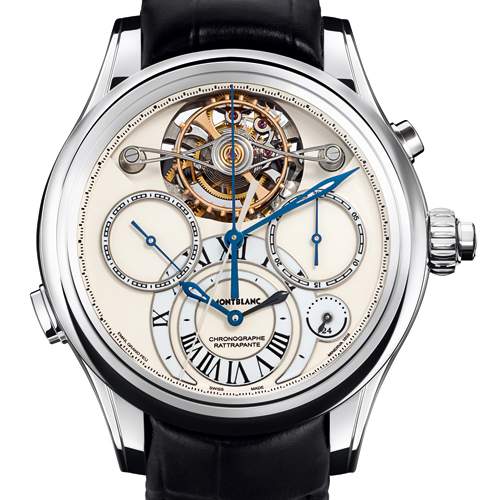 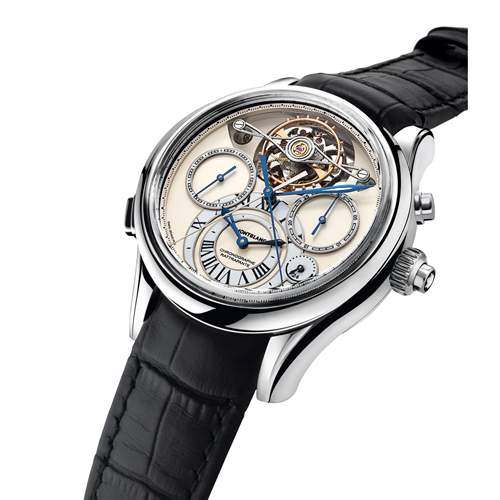 The highest art of watchmaking: The Innovative Tourbillon with Additive Stopping

With the ExoTourbillon Rattrapante from the Collection Villeret 1858, Montblanc presents a unique timepiece in the world of haute horlogerie. This wristwatch combines a split-second chronograph and Montblanc’s patented ExoTourbillon, which has a large balance that oscillates outside the tourbillon’s rotating cage. The three-dimensional regulator dial is made of gold, decorated with grand feu enamel elements crafted in accord with the tradition of ultrafine watchmaking, and includes a display for a second time zone with a day/night indicator.

The Montblanc Manufacture in Villeret has acquired comprehensive expertise in the discipline of grandes complications. The manufactory’s history began in 1858, when it was established under the name “Minerva”. The manufactory is one of the few which doesn’t only fabricate components: ever since its earliest days, complete and meticulously handcrafted movements have been developed and built here. Their ongoing development and the broad know-how in the discipline of measuring brief intervals led to the production of split-second stopwatches in the mid 1930s. So-called rattrapante chronographs can measure intermediate times without interrupting the ongoing measurement of a longer elapsing interval. These stopwatches from the manufacture in Villeret were used successfully at the Winter Olympics in 1936.

Today too, the Montblanc Manufacture unites traditional Swiss horological craftsmanship of the highest level and an indefatigable striving for innovation.

For reasons related to the construction of every mechanical watch, the centre of gravity of the balance and hairspring is not directly collinear with the balance’s staff. This eccentricity is disadvantageous when the timepiece is in a vertical position because Earth’s gravitation attraction acts on the eccentric centre of gravity and accordingly disturbs the regularity of the balance’s oscillations. In a conventional tourbillon mechanism, the balance is borne inside a cage that constantly rotates around its axis, while the balance’s eccentric centre of gravity likewise orbits this axis in the same interval. The acceleration that Earth’s gravity causes during the first 180° of the tourbillon’s rotation is compensated by a corresponding deceleration during the second half so the movement keeps time at a regular rate for each rotation.

The Montblanc Manufacture in Villeret specializes in tourbillon escapements. The watches of the Montblanc Collection Villeret 1858 are equipped with large, massy balances that require big rotating cages. As their rotation requires a correspondingly large amount of energy to keep them in motion, the tourbillon mechanism for these timepieces can be mastered only by watchmakers endowed with the most profound expertise and the greatest manual dexterity.

Their skills are nowhere more impressively evident than in the watches that comprise the energy to power other functions of the movement so that these impressive screw balances, which are traditionally handcrafted in the manufacture, can be included in tourbillon watches with additional complications. The striving for perfection at the Montblanc Manufacture in Villeret resulted in the development of an innovative tourbillon construction that brings significant advantages in terms of energy request and precision: The patented ExoTourbillon. Its balance is isolated from the tourbillon`s rotating cage so the cage’s rotation doesn’t interfere with the balance’s oscillations. It is the world’s first tourbillon with a rotating cage that is smaller than its balance, which oscillates outside the cage – whence the Greek prefix “exo” (outside) in the timepiece’s name. The balance in this unconventional configuration is borne between two jewels, while the tourbillon pivots in a two-point bearing, i.e. it is neither cantilevered nor borne between an ordinary pair of bridges. An advantage of isolating the balance from the rotating cage is that the balance performs with greater precision because it isn’t disturbed by the inertia of the cage. The smaller rotating cage has less mass and is freed from the weight of the balance, so less energy is needed to power its rotary motion.

Another exclusive feature of the ExoTourbillon is the slower speed of its rotations, each of which requires four minutes. Conventional tourbillons typically complete one rotation per minute. The slower rotational speed requires less energy from the barrel, but produces the same compensating effect as speedier tourbillons.
Thanks to the ExoTourbillon’s patented energy-saving construction, a tourbillon can be wed to a cleverly designed split-second chronograph function. Despite its mechanical complexity, this split-second function can work with the same barrel and the same power reserve as those of the basic chronograph movement – and can do so with greater precision than would be possible in a chronograph without the ExoTourbillon’s construction.