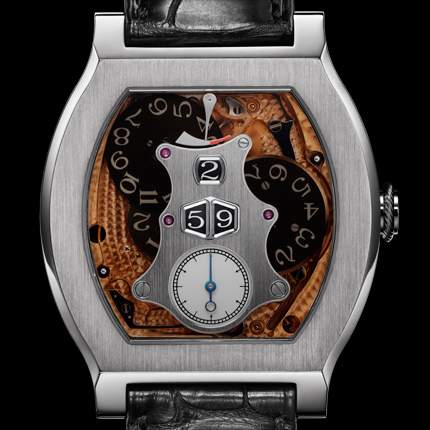 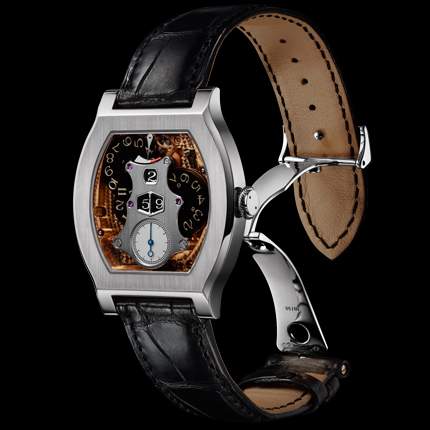 The Long-Awaited Limited Series for Collectors

F.P.Journe presents the second chapter of the Vagabondage Limited Series, “Vagabondage II”, which will be produced in a limited series of 69 pieces in platinum and 68 pieces in 18K red gold, available from all authorized F.P.Journe points of sale around the summer 2010.

It is essential to retrace the history of this creation, which has made its mark in the watchmaking history and represents the quintessence of anti-marketing. In 2004, for the 30th Anniversary of Antiquorum, François-Paul Journe created a unique piece to be sold at a Geneva charity auction in favour of the ICM, research institute for Brain and Spinal Cord diseases in Paris, www.icm-institute.org. This was an F.P.Journe Invenit et Fecit creation indeed, but with an unusual shape. For the first time, the Geneva Manufacture created a watch that was not round, with a flat Tortue-shaped case and a dial without the F.P.Journe signature.

Following that charity auction, for which 3 pieces were produced - one in rose gold, one in white gold and one in yellow gold, which sold for three times their value - a limited series of 69 pieces in platinum was launched with an 18K rose gold movement. This series was sold without promotion or publicity of any kind, and without any picture. Collectors went wild for it. A legend was born.

It goes without saying the Vagabondage II series has been long awaited by collectors. This second edition present a manually-wound movement and an original digital time display, with small second at 6, power reserve at 12. The 18K rose gold movement is visible through the dial in smoked sapphire crystal, also without the F.P.Journe signature.

A third Vagabondage edition will very likely be created as new technical advances dictate. Each watch of the "Vagabondage" series will have an original digital display system.

His peers the world over recognize his integrity in the realization of innovative pieces, his ingenuity, and his unique technical sense. A recipient of all the most prestigious horological prizes, F.P.Journe has been granted numerous awards at the Grand Prix d'Horlogerie of Geneva, among them three influential “Golden Hand” awards.

François-Paul Journe is one of the last remaining Master watchmakers committed to defending the fundamental values of Haute Horology, as he pursues his quest to restore authenticity to the history and practice of time measurement.