Upside Down mother of pearl inlay 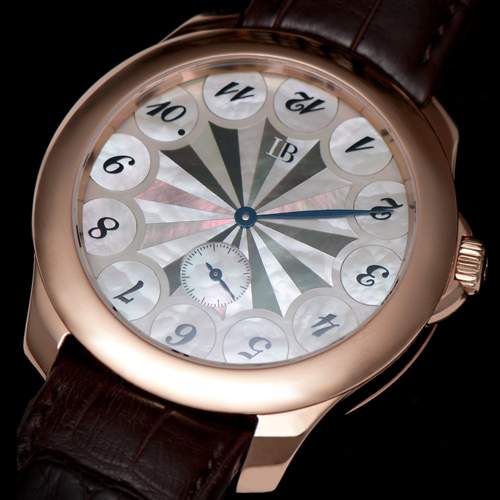 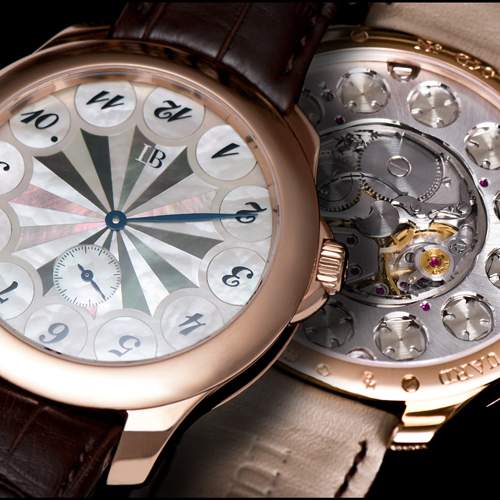 The Upside Down is one of those watches that at first glance seem quite classical. However, a second glance reveals a big surprise and great ingeniosity. Indeed, all the figures are upside down, except the current hour which is right side up! Its reading is facilitated by a coloured dot, giving it that extra.
Ludovic Ballouard's talent and mischieviousness have led him to reinvent the jump hour through a totally unique animated dial. This is how it works : when the large central needle reaches the 60th minute, the wafer bearing the figure showing the coming hour does a 180 degree rotation. At the same time, the wafer carrying the previous hour does the same rotation, leaving the figure in an upside down position.

This unbelievable display requires a very special mechanism. In order to meet the challenge related to the rotation of the wafers, Ludovic Ballouard developed a system based on Maltese Crosses, which not only allows precision of the leaps but also avoids the mechanism undergoing too much energy consumption.

The Upside Down exists in several different models. The one which we present you here has a fabulous mother of pearl dial. A special kind of magic accompanies the time display, which is highlighted by hundreds of subtle tones of light.

This  very special dial is created by using of a two-tone pearl, creating a kaleidoscope starting at the centre of the dial and radiating to the hour digits, which are pearly.

The base of the dial is composed of 13 pieces, on which were assembled, one by one, 42 pieces of two-tone mother of pearl.

The principal elements surrounding the time wafers intertwine in a most extraordinary way, ressembling an open umbrella or a delicate fan. The result is an object of rare, shimmering beauty. The colours blend, the reflections astound, the animation of the dial is enhanced in a most beautiful and astonishing way. As the wafers turn to display the time, the central kaleidoscope evolves, changing according to the tilt of the wrist or the light striking the dial.

Such a result is not the outcome of chance! The dial, created and assembled by a master craftsman is made up of 55 elements, allowing a fabulous and amazing play of light to generate.

The 12 rotating wafers and the practically invisible and minute space between the edge of these wafers and the edge of the 12 apertures in the dial, demands the most extreme precision during assembly. The minute space must be respected to allow the wafers to turn and yet must be quite invisble to the naked eye in order to allow a total homogeneity of the kaleidoscope effect of the dial. This assembly is no ordinary feat!

We now come to the blued steel minute hand. It stands out and remains perfectly visible, as do the 12 figures and the hour dot, all enhanced by the most amazing dial. The reading of time is easy and agreable.

Although one's eyes are drawn to the extraordinary shimmering of this beautiful dial, one cannot forget that the biggest feat of the UPSIDE DOWN timepiece remains the rotating time wafers, which make it a unique complication. The specifically studied shape of the case and horns, short and curved, allow this watch to sit on the wrist in a most comfortable and natural way.

The UPSIDE DOWN with a luxury mother of pearl dial is available in 12 platinum and 12 pink gold pieces. With these limited editions, Ludovic Ballouard brings a new dimension to his UPSIDE DOWN model, that of a highly artistic touch of great craftsmanship.