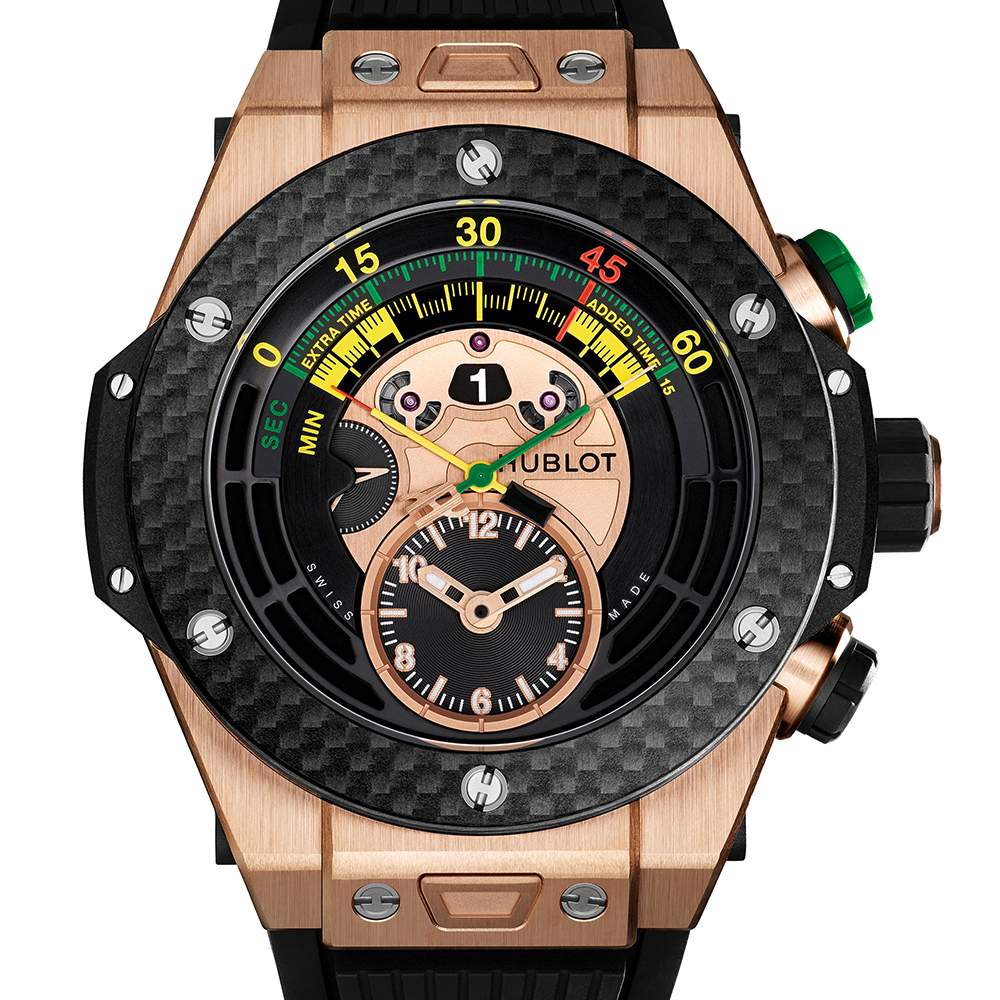 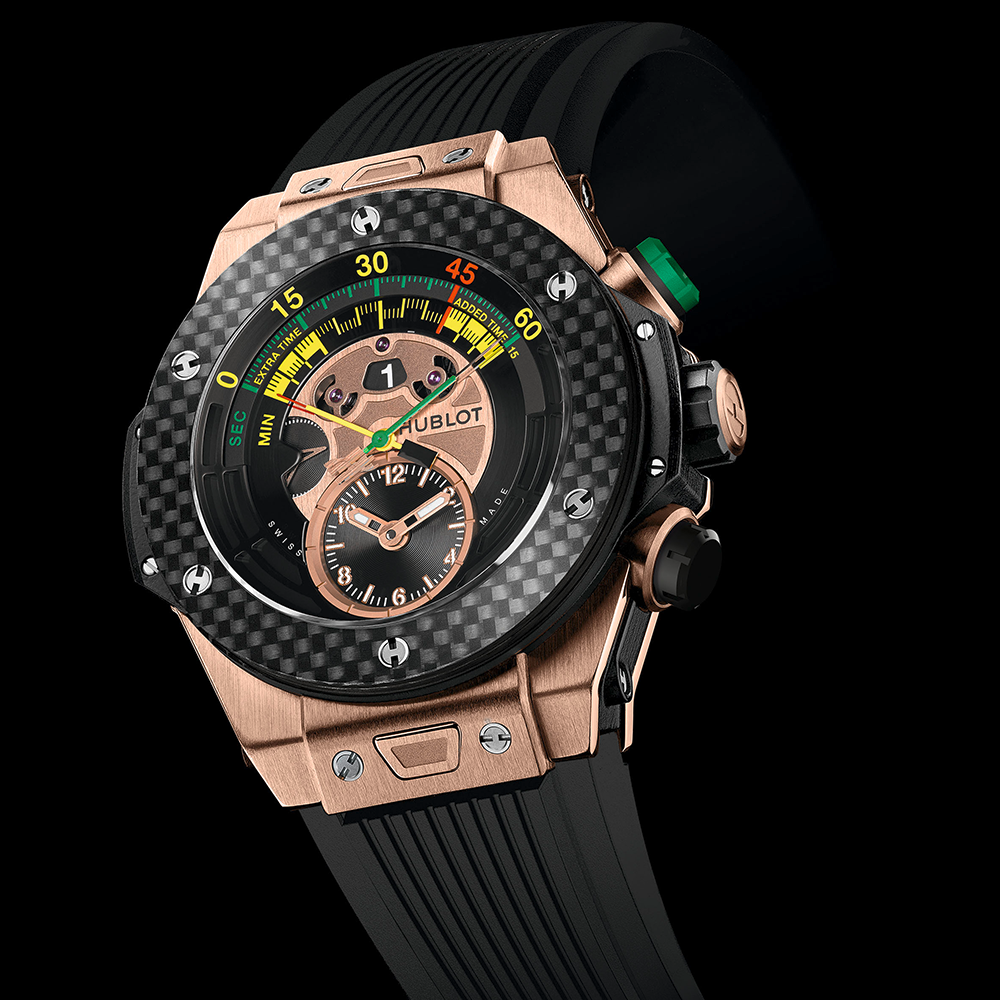 It's a watch specially designed for the world of football.

It's the Official Watch of this year's FIFA World Cup™. It's also the first Big Bang Unico Bi-Retrograde Chrono. It's a first for Hublot, who has never before produced a bi-retrograde function, along with a central chrono, a movement with patent pending.

The engineers and watchmakers at Hublot were initially inspired to develop a watch movement specifically for the world of football, to pay homage to the prestigious 2014 FIFA World Cup™ for which Hublot is the Official timekeeper and the Official Watch.

The UNICO Manufacture calibre – unique in the industry, with its column wheel and dual coupling on the dial side – was chosen to serve as the basis for the development of this watch, here embodying a very current example of its extraordinary flexibility.

The fruit of 18 months of research and development, the new automatic HUB1260 manufacture movement has arrived: a bi-retrograde movement with central chrono comprising 385 components (Frequency 4 Hz, 28,800 Vib/Hour), patent pending. It is also one of the only movements of its type in the watchmaking industry today.

It is the first time Hublot has unveiled a watch with a bi-retrograde display (the hands return to their starting points at lightning speed). How does it work in this particular case? When the chronograph is started, the chrono's second hand and minute hand move from left to right in a circular arc of 45 minutes (one half of a football match), with an area for 15 minutes' added time up to 60 minutes. There are two push-buttons on either side of the crown for START, STOP and RESET; the push-button at 2 o'clock is also used to show the period of time selected from the following 4 options: 1st half, half time, 2nd half and end of match, indicated by a window in the centre at 12 o'clock.

Another challenge to be met by those designing the movement was energy. This rather unusual display design demands additional effort, as the rapid movements of the hands require more energy from the movement. This has been optimised, as far as possible, so as not to affect the correct operation of the time display; Hublot was highly selective in its choice of materials and functions, opting for those offering the lowest possible consumption and friction coefficient.

Obviously, time doesn't stop during a gripping football match. This is why the two permanently rotating hands are arranged in a counter at 6 o'clock. This way, they continue to display the passing hours and minutes while the seconds are shown by a small sector-shaped counter; this has a three-spoke hand positioned at 9 o'clock which rotates permanently and allows the wearer to see at a glance that the movement is working correctly. The power reserve is approximately 72 hours.

Finally, the dial bears the national colours of Brazil – yellow and green – in reference to the competition's host country.

The design of the piece features a "Big Bang Unico" case with a powerful 45.5 mm diameter for a stylish mechanical look. The bezel is secured by the famous 6 H-shaped screws, designed in relief to allow alternating polished and matt finishes. The screw-down crown with overmoulded rubber is also decorated on the end with the famous "H" from the Hublot screw, with its two push-buttons positioned at 2 o'clock and 4 o'clock.

The sharp angles and intelligent sandwich system have been retained in the case design, but the strap attachment in particular has been optimised: it features the now famous "One click" system which allows the wearer to switch between a wide choice of straps – each watch is supplied with a structured and ribbed natural rubber strap which perfectly matches the endpieces of the middle. Water resistant to 100 metres.

Although its official name is the "Hublot Big Bang Official Watch of the 2014 FIFA World Cup Brazil™", it has already earned the name "Soccer Bang". It is available in two versions: firstly, an 18K King Gold version with carbon fibre bezel limited to just 100 pieces and, secondly, a black ceramic version, also with a carbon fibre bezel, which is limited to 200 numbered pieces.