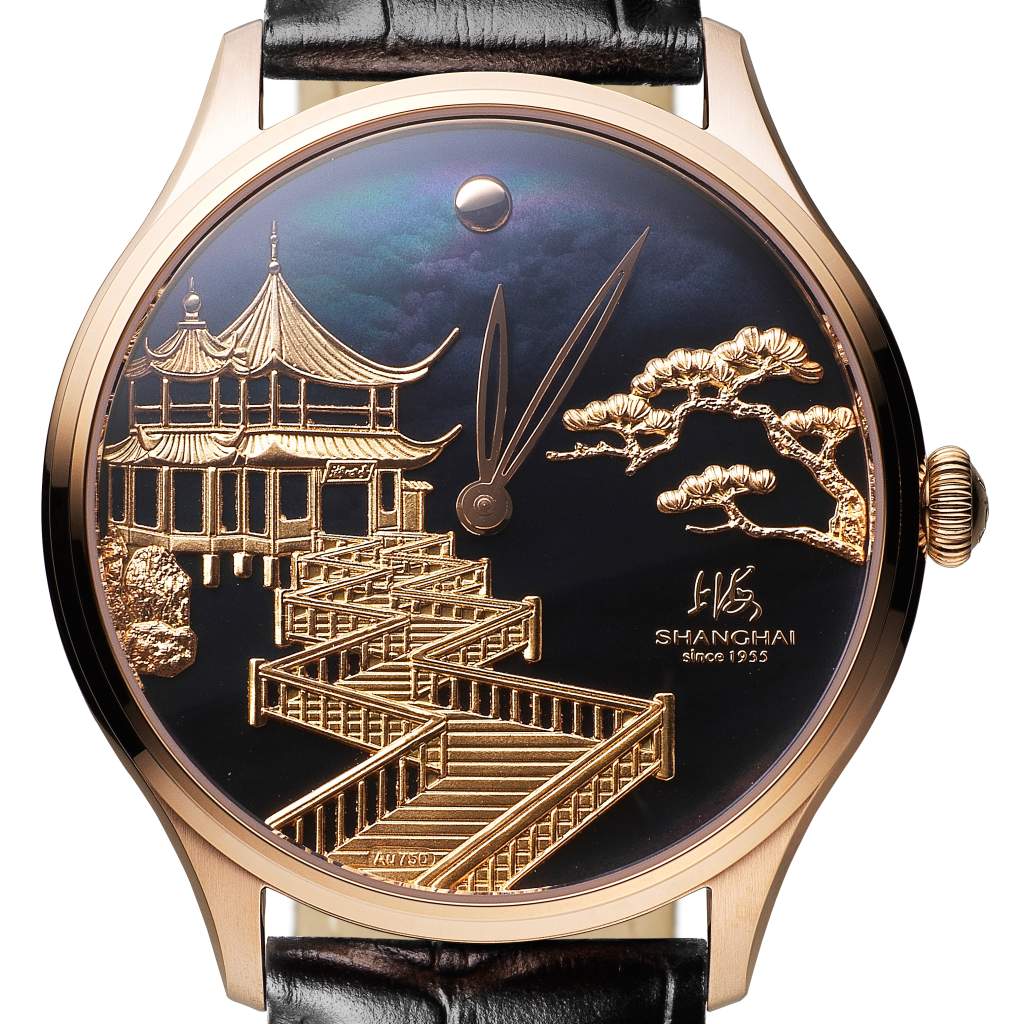 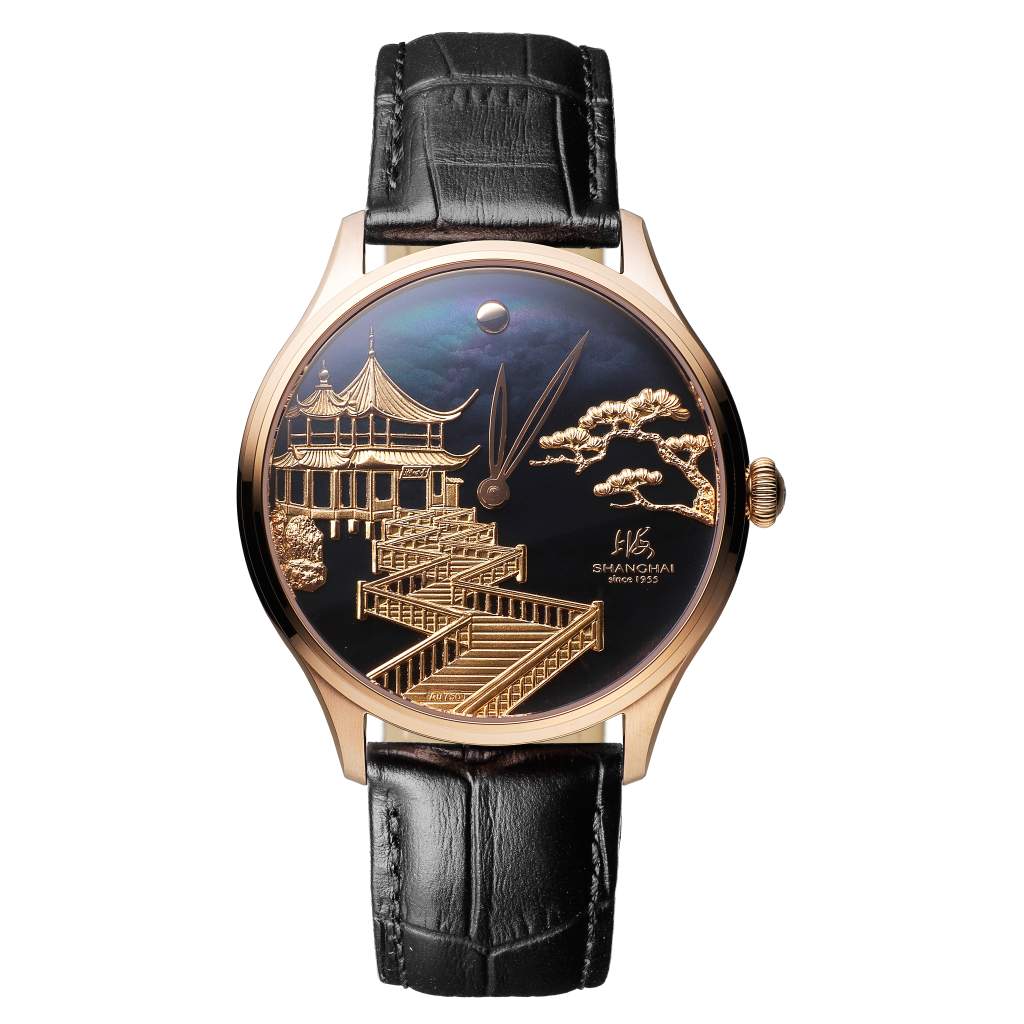 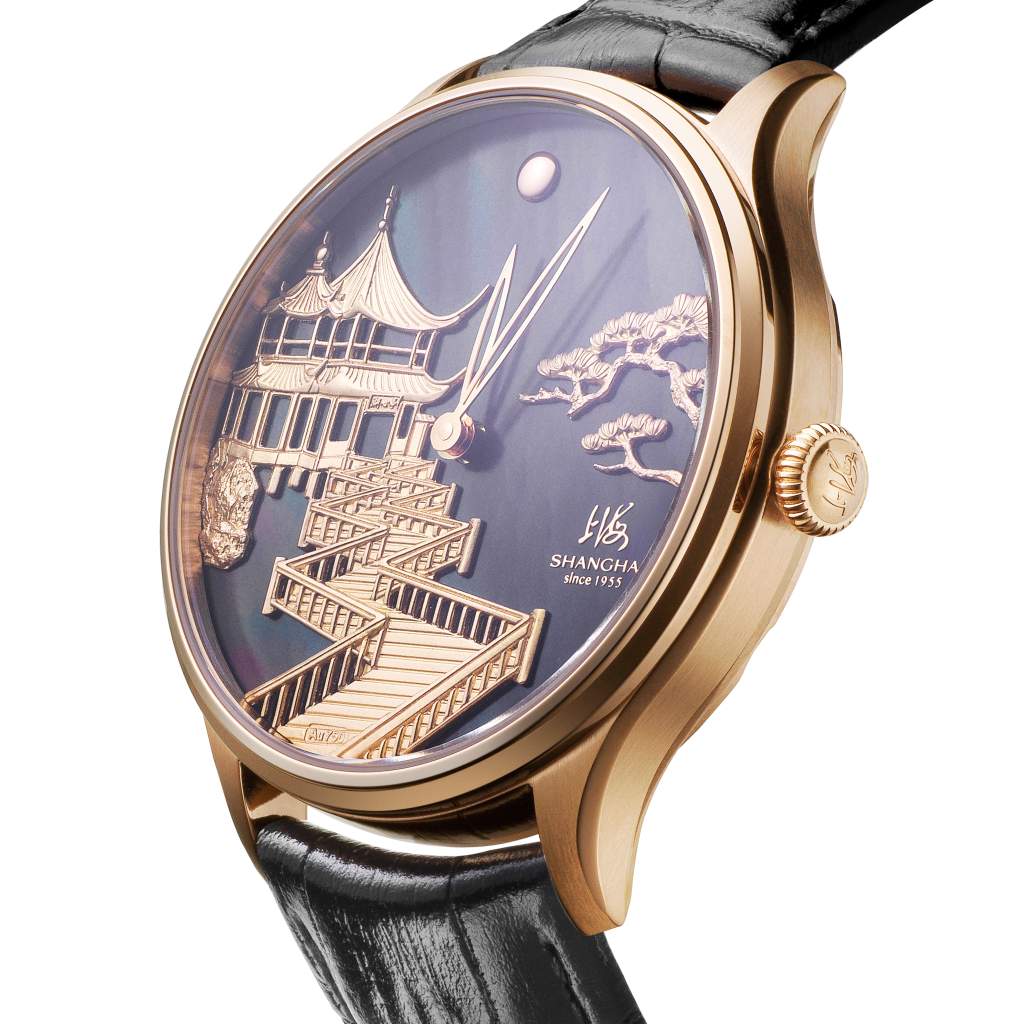 A nod to Shanghai’s architectural heritage, the Artistic collection of Under Moonlight watches pays tribute to the Mid-Lake Pavilion, the oldest preserved tea house in Shanghai, not only for its history but also for its cultural landscape significance. The pavilion was opened as a teahouse in 1855 and has been repeatedly represented in literature and images since then, playing the role of a cultural envoy and becoming the first impression of the city to the world.

Sought inspiration from the literature depiction of the Mid-Lake Pavilion, Under Moonlight presents a golden picturesque landscape of a lotus lake, sculpturing a night garden with crafted 18ct gold engraving. A pavilion situates in the center carved with iconic flying eaves and a zigzag bridge meandering towards the viewer. On top of the dial, a harvest moon functions as an hour marker, forming an ideal realm that appears to be real.

For each dial SHANGHAI chooses black mother-of-pearl meticulously, characterizing the natural iridescent tones of green and violet and texture as part of the landscape composition to imitate the auspicious cloud and wave. This unique juxtaposition of gold engraving and black mother-of-pearl conveys SHANGHAI’s deep passion for reinterpreting traditional motifs and maneuvering materials in a new perspective. Under Moonlight is powered by the Sellita SW300 automatic movement, with leather straps and pin buckle.

In 1955, the development of the first Chinese wristwatch equipped with lever escapement by the first generation of Shanghai watchmakers inaugurated the establishment of the SHANGHAI Watch. With the brand's initial aspiration of “making watches to witness precious moments” and its pioneering spirit, SHANGHAI Watch has never abandoned its vitality, inventiveness, ingenuity, and inclusiveness in the past about seventy years of glories and vicissitudes, and has kept drawing inspiration from oriental aesthetics and philosophy, incorporating contemporary craftsmanship through the vehicle of wristwatch to present the world with the charm of the Shanghai-style. SHANGHAI Watch joined in Fosun Watch Group in 2019. 2022 sees the launch of five collection series: Originate, Metropolitan, Artistic, FAB CHRONO and Artisan LM.