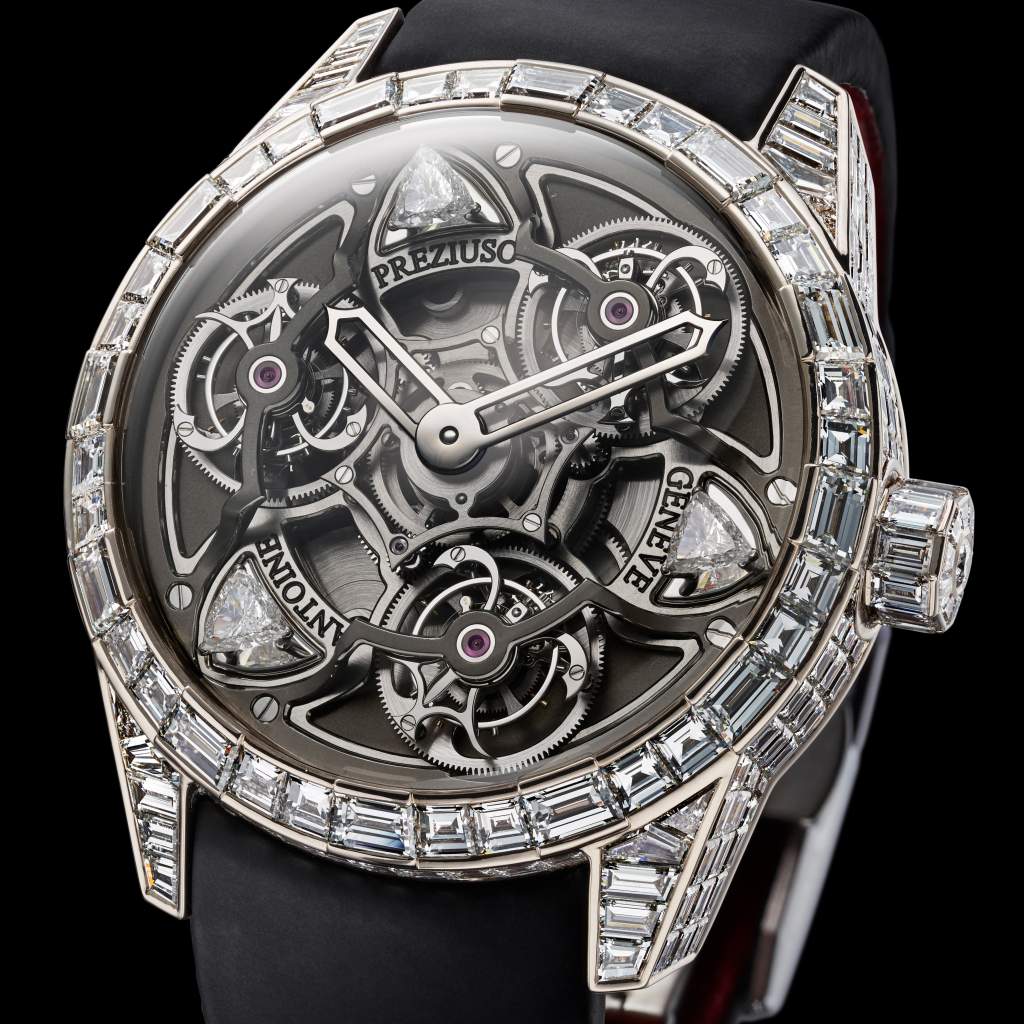 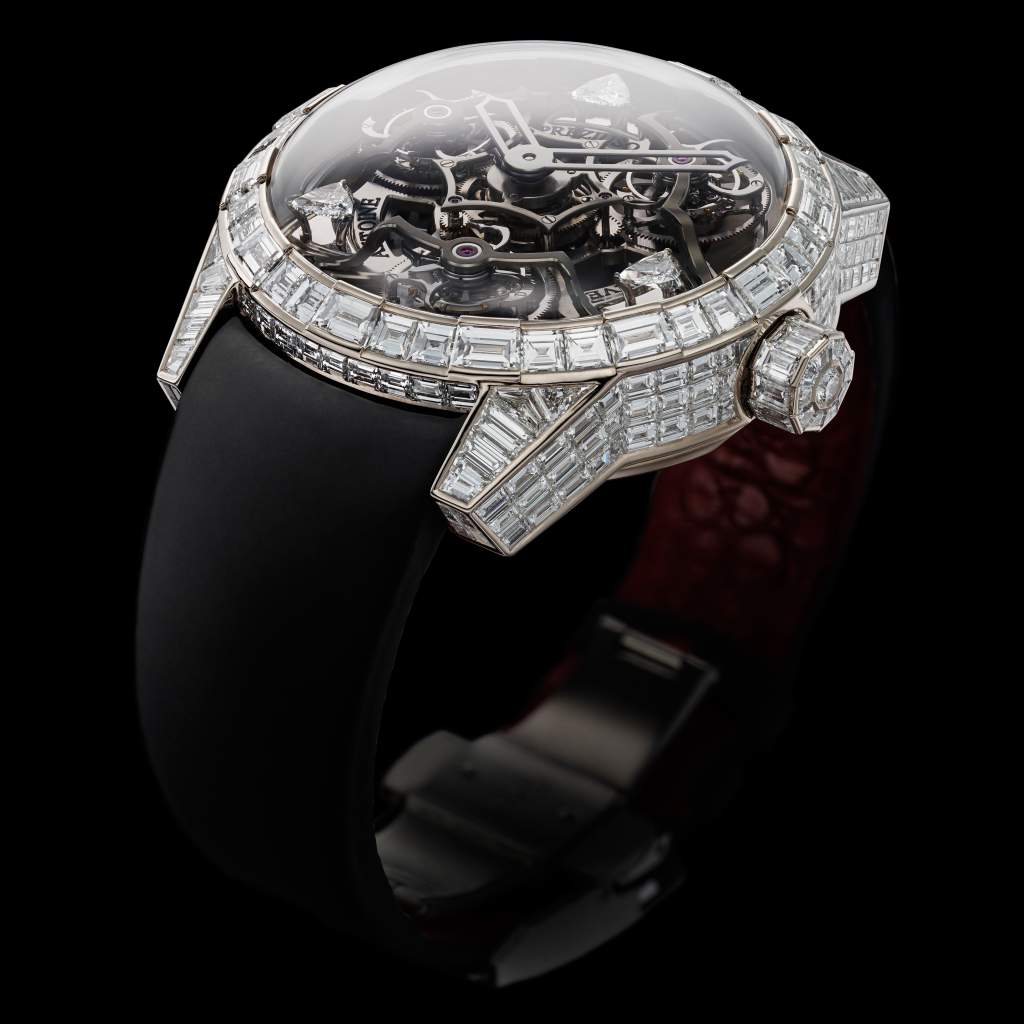 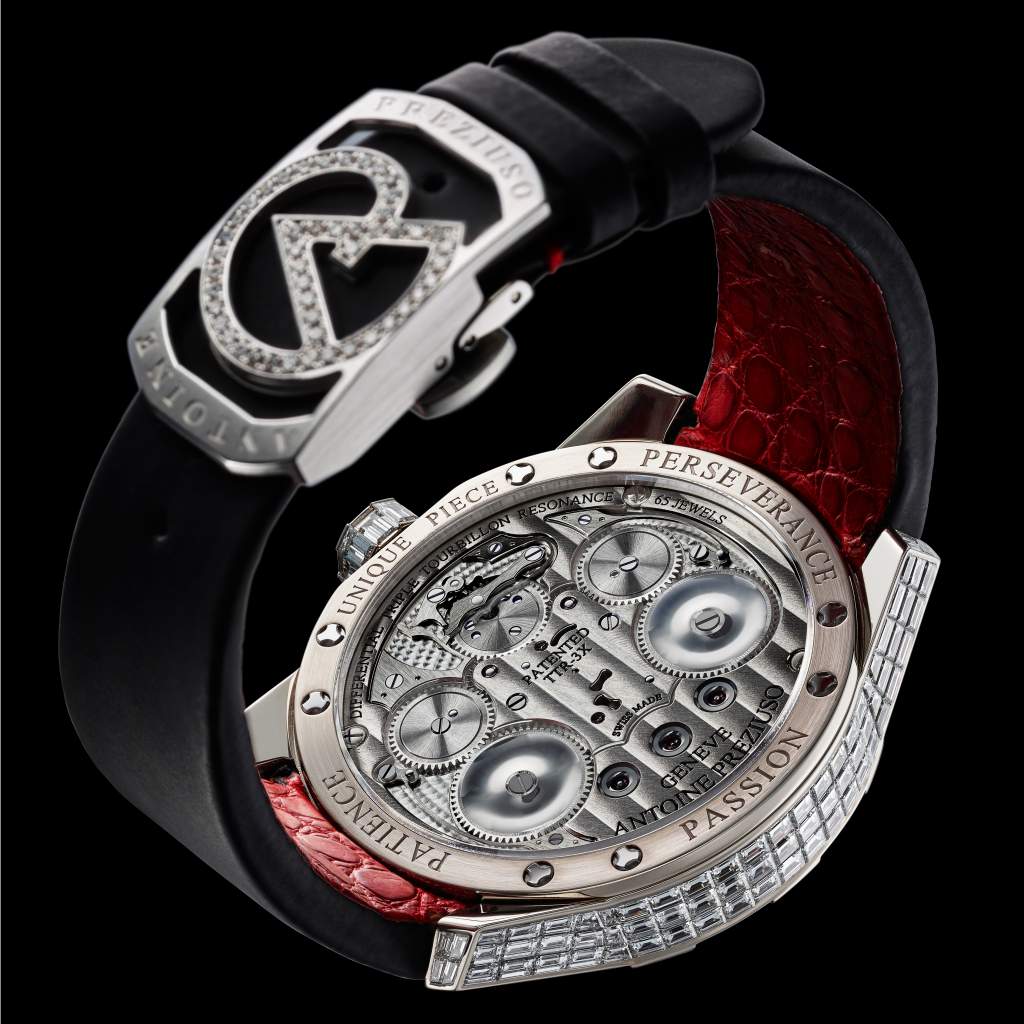 This year, ANTOINE PREZIUSO GENÈVE is showcasing a spectacular new version of his Tourbillon of Tourbillons, a high-precision timepiece that was created in collaboration with his son Florian and that won both the Innovation Watch Prize and the Public Prize at the Grand Prix d’Horlogerie de Genève. The Trillion Tourbillon of Tourbillons a one-off watch, features diamonds as part of its exclusive, flamboyant appearance, with an interplay of lights that awakens emotions. This is both an adventurous and sophisticated creation, as this extravagant, timeless watch not only defies the laws of gravity and plays with those of resonance, it also represents a masterpiece of high jewellery pushed to its limits.

A work of high jewellery: the art of displaying maximum brilliance

The Trillion Tourbillon of Tourbillons, a masterful homage to the challenges of watchmaking, features three pure-white Top Wesselton G+ solitary trillion diamonds floating on the dial, beside the three tourbillons.dancing on a revolving plate, which are connected by a triple-differential gear.

The complex architecture of this watch, which is set off by a 47 mm case that is deliberately extravagant, blends harmoniously with the white 18 ct gold with 233 diamonds that are 24 carat baguette-cut in rare white (Top Wesselton G+), invisible mounting, of unparalleled purity and radiance. Baguette-cut is one of the most difficult cuts to carry out. Its quality guarantees that light will be reflected well and gives the diamond its magnificent radiance and beauty.

The Trillion Tourbillon of Tourbillons is a fascinating symphony of light and is evidence of Antoine Preziuso’s ability to combine high watchmaking with high jewellery.

Tradition, complications, innovation: these three words underpin the work of Antoine Preziuso, founder of the brand ANTOINE PREZIUSO GENÈVE, which in 2018 celebrates thirty-eight years of independent watchmaking. From his studies at Geneva’s Ecole d’Horlogerie – where he discovered his calling – to the creation of the Tourbillon of Tourbillons (in close collaboration with his son Florian), Antoine Preziuso has always been inspired by three powerful values: respect for watchmaking tradition; mastery of major complications; and a constant quest for innovation in technique and design. It was Antoine Preziuso, for instance, who conceived the first watch entirely in meteorite: case, dial, buckle and hands in 2002.

Antoine Preziuso was born in Geneva, in prime watchmaking territory, but is also proud of his Italian roots. His twin origins help explain the identity of his timepieces, with irreproachable technical quality allied to striking design. He swiftly became a passionate restorer of old timepieces, attracted by the savoir-faire of master-watchmakers of the past, and by the attention they lavished on the quality of finish. His respect for watchmaking tradition finds concrete expression in the watches he designs. The very first watch made by ANTOINE PREZIUSO GENÈVE, back in 1991, already bore the Geneva hallmark!

Antoine Preziuso is internationally recognized for his mastery of major complications, which connoisseurs can admire under his own name or in his regular work for other brands. His workshop produces minute-repeaters and perpetual calendar watches, although it is above all the Tourbillon that dominates his attention: a complication combining elegance, technique and poetry that has reigned supreme in the art of watchmaking for over two hundred years. The Tourbillon’s fascination lies in the number and size of its components and the movement of its cage, which recalls the movement of the stars. The Tourbillon is also the favoured means for Antoine Preziuso to continuously improve the chronometric quality of his timepieces.

ANTOINE PREZIUSO GENÈVE is a family business. The passion for watchmaking, the love of uniqueness, of the luxury of good manufacturing that comes only from time and experience are values that Antoine Preziuso claims and shares with his family members. May, his wife, has always been at his side. She is a source of undying support, in all aspects of life, not unlike a watchmaking calibre component; her role could be compared to that of a bridge. Solid and reliable. Or, perhaps better yet, to that of a differential, harmonizing as best as possible the forces and equilibriums within this extraordinary family. Laura, their daughter, expressing  her talent by combining jewellery and watchmaking techniques in a mechanical jewellery collection. She is also teaching at the Geneva School of Applied Art. Florian, their son, has followed Antoine’s path. That of watchmaking and its technical difficulties that haunt you until you solve them. He is now closely involved in all the company's new designs, and masters every aspect of R&D and production.