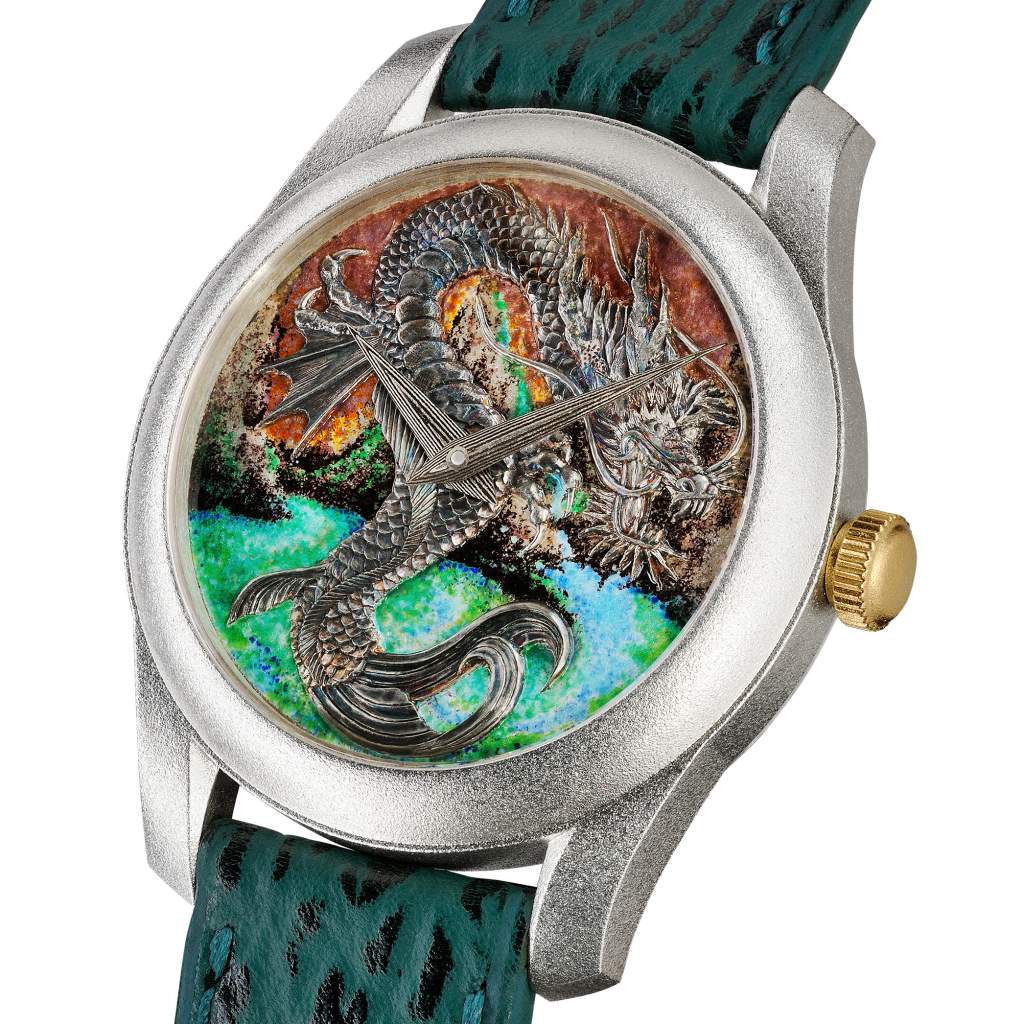 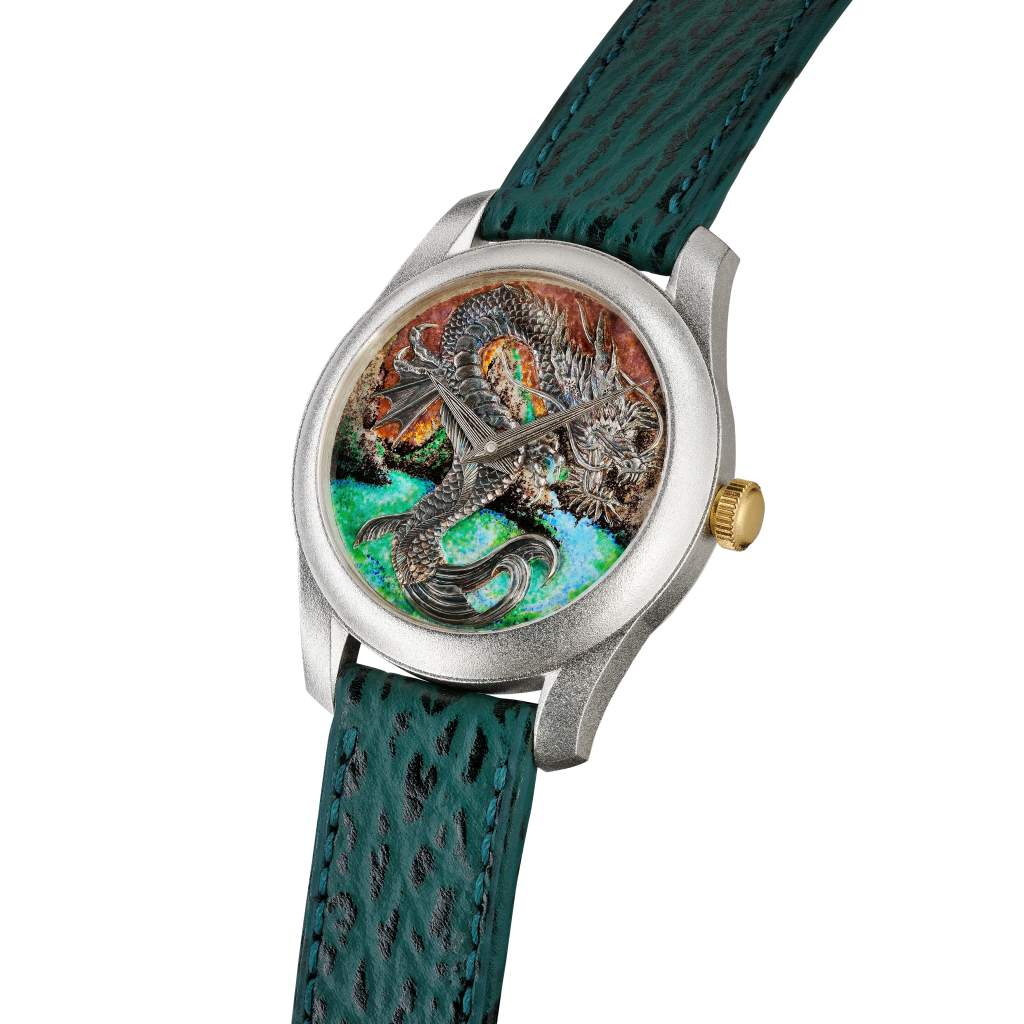 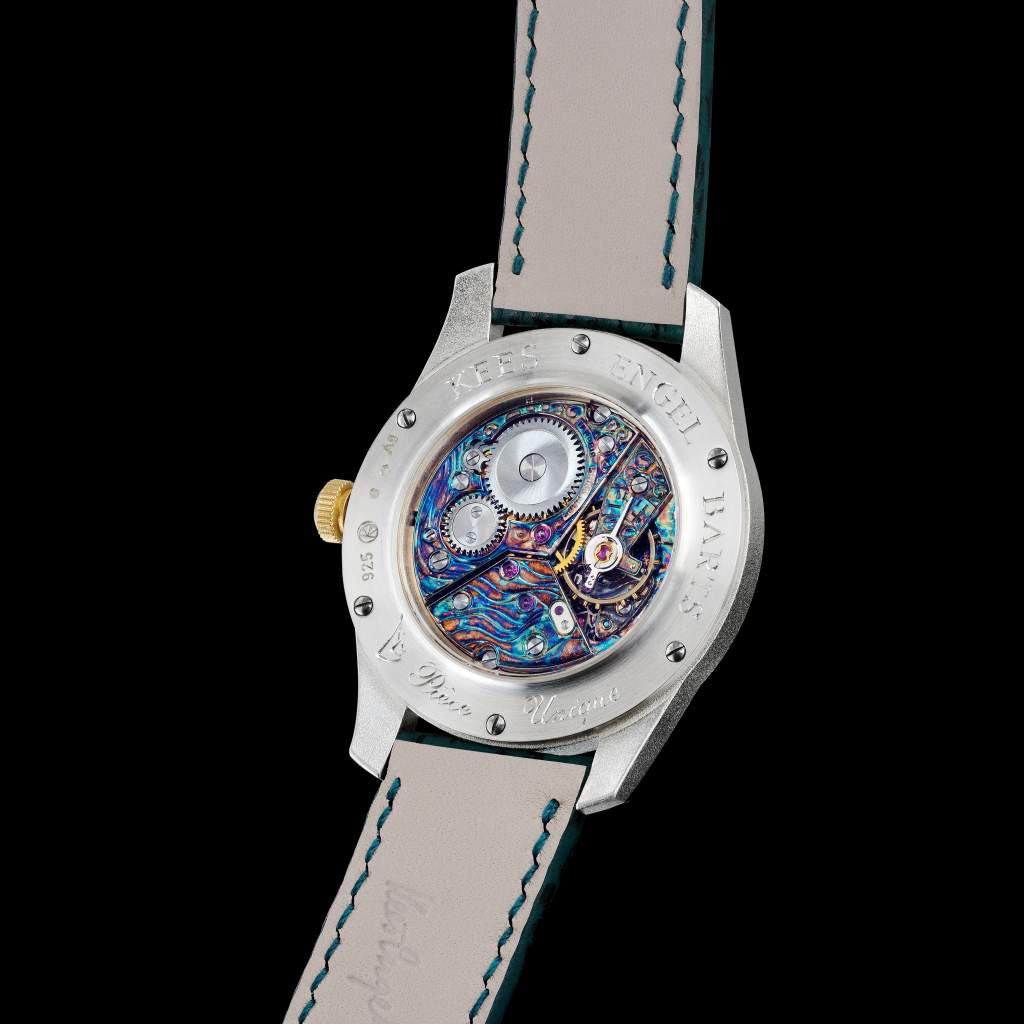 The watch Mr. Engelbarts is presenting for the GPHG is the second of his Dragon Gate trilogy, « the transformation ». The solid silver dial of the watch is intricately hand-engraved in bas-relief technique. The bas-relief technique consists in taking away the material around the final shape so the subjects stands out. The subject is then engraved in a way to suggest 3D on only 0.8 mm thickness. The background of this dial is hand-painted with translucent enamel to create an interesting contrast. Although the background is abstract, one can guess a lake, mountains and an orange/red sky. The transformation of the carp to dragon is evident by looking at the body of the creature that has dragon-like features on top and still resembles a fish in its lower body parts. We even see a fin that is starting to turn into a claw. The engraved silver creature is oxidized to give more depth to the engraving.

Remaining in his established niche of Asian myth-related timepieces, this new trilogy of watches presented by the master engraver Kees Engelbarts embodies his artistic vision perfectly. Depicting the Chinese Dragon Gate legend, these three pieces experience an artistic shift along the way, the first piece being entirely engraved, and the last one being entirely enamelled, with the second piece being a combination of both techniques. The Dragon Gate legend tells of a legendary waterfall, which turns carps who succeed in scaling it into dragons. This myth reflects China's meritocratic views: those who work hard and aim high will be rewarded. The three dials of this trilogy represent the three stages of a carp experiencing this transformation: first the carp, then the carp as it starts to transform into a dragon, and finally the fully transformed dragon.

The movement of each watch is also hand-engraved to complement the dial's design, featuring stylized, hand engraved and chemically coloured motifs : an Asian wave pattern for the first piece, waves and clouds for the second, and just clouds for the final one.

These three pieces are displayed in a lacquered wooden case. Its design depicts the scenery of the legend, with three windows to show the dials in their respective place. We can see a lake, with a river leading up to the mountain with the rapids and finally the Dragon Gate. The making of this presentation box took no less than 140 hours of work.

The artists who worked on this project:

The first and second piece were hand-engraved by Geneva based Dutch engraver Kees Engelbarts. He was the one who conceptualized this trilogy of watches. Only making a very limited number of watches per year, he puts great care and attention in the making of these pieces, using only the best materials and movements available. He is also one of the only engravers who uses Mokume Gane, an ancient Japanese technique translating to “wood grain metal”, on his dials.

The second and third dials were enamelled by Gael Colon. This French artist who mastered glass-blowing at a young age discovered the world of enamel and watchmaking in his twenties. After working for Lalique crystal glassworks, he started working for Roger Dubuis and honed his enamelling and miniature glass painting technique. Since then, he has been working with other artists to preserve traditional craftsmanship, which has elevated Swiss watchmaking to what it is today.

The box was made by Carré d'ébène, a French Company founded by Pascal Vachet in 2007. Pascal Vachet obtained his degree from the Boulle school in Paris, recognised as one of the greatest art and design schools in Europe. Carré d'ébène specialises in luxury display cases and jewellery boxes. Every product is carefully constructed and their expertise in cabinetmaking and art tabletterie is self-evident in the finished product.

This box was then lacquered by Catherine Nicolas, who was awarded the title of MOF, Meilleur ouvrier de France, for her outstanding lacquer work. She specialises in traditional Chinese, Japanese and European lacquer techniques, but she works on projects of all sizes, from small jewellery to monumental murals. She was the only European at a lacquer exposition in Beijing in 1999, but her work garnered much attention despite this. That same year, she is given the special award of the Ishikawa International Design Competition.