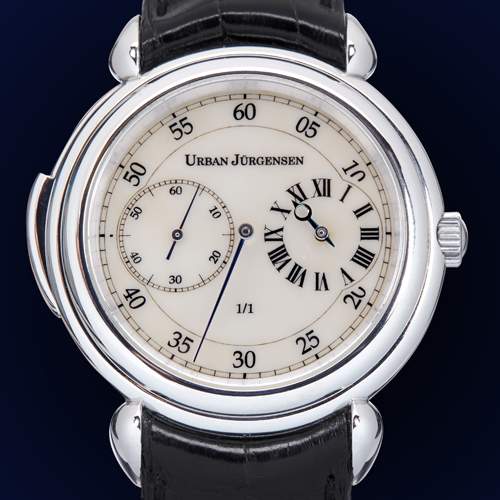 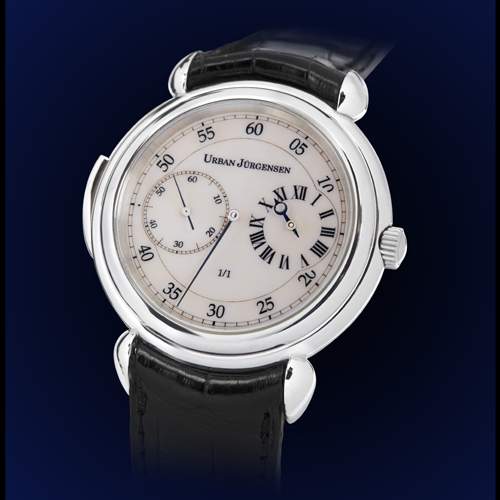 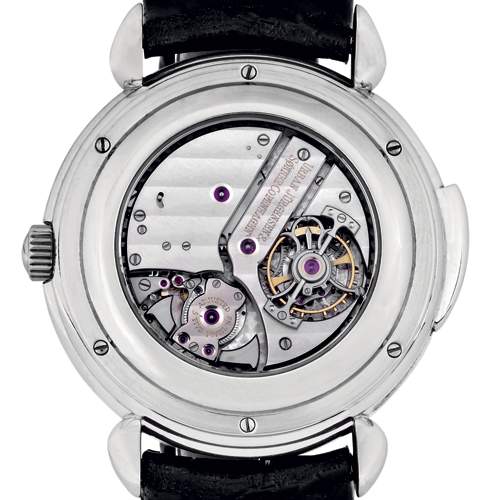 The watch allows the user to call upon it to signal the time when desired. This is accomplished by pushing a sliding lever located on the side of the case at 9 o’clock, thus activating the chiming mechanism.
The watch uses two gongs.

The term ‘regulator dial’ refers to the central position of the blued steel minutes hands in relation to a separate subdial for the passage of the hours. Thus, the visual main accent is on the minute hand in the center. The reason behind the term ‘regulator’ in this case refers to the connection with the word ‘regulation’. This uncluttered position of the minute hand made it easier to exactly set the watch to an exact observatory timekeeper and more visually efficacious in applications that required the close observation of the exact passage of minutes in scientific studies when compared to a standard watch format where the hour and minute hands work from the same central position. In this way, the popularity of the regulator style dial layout coincided directly with the advances made in science, business, medicine and industry during the course of the 19th century.

The art of enamel dial making

In the 21st century, the word ‘enamel’ is often thought to be synonymous with anything that is painted with a high gloss finish, even though this is far from the definition of the original craft. Even in the world of haute horology, enameling is oftentimes confused with the use of white or colored resins used on ceramic dials, as well as paints that require only a very low temperature, such as 150˚ or 160˚ C in order to fixate and harden. Linguistic mystification also plays a role with the coining of the term ‘cold enamel’ used to describe such work at low temperatures, whereas it has nothing to do with traditional enamel artisanry at all.

On the other hand the high fire temperature criteria (700° to 800°C) used in the “Grand Feu” technique is not the sole difficulty encountered  in making high grade enamel dial. These high temperatures are required to allow the silica, ground into a fine powder and mixed into an emulsion, to melt, vitrify and take on its glass like, exceptional glow and depth. In addition to the precise firing techniques, many other aspects affect the creation of an enamel dial perfected created for our watches. Besides the complete hand painting of numbers and characters, during the final stages some four transparent crystal flint glass fondant layers are applied and individually fired. In between each firing all imperfections will be smoothed out of the transparent vitreous enamel. It is the application of these layers of transparent fondant, perfectly set with exact thickness over the entire surface, which creates the transparency, glow and depth of a perfect dial. Such work allows no shortcuts. For the dial maker, it is also a nerve-wracking process, since the possibility of the dial deforming or developing hairline cracks increases with the firing of each layer. One last step will see the dial undergo further grinding, lapping and polishing – all entirely executed by hand. Whereas most enamel dials are normally 0.8 - 1.2mm in thickness, the dial specially created for the Urban Jurgensen & Sønner Tourbillon Minute Repeater have been created with a thickness of a mere 0.65mm, an amazing technical feat only achievable by the greatest artisans of the enameler’s art