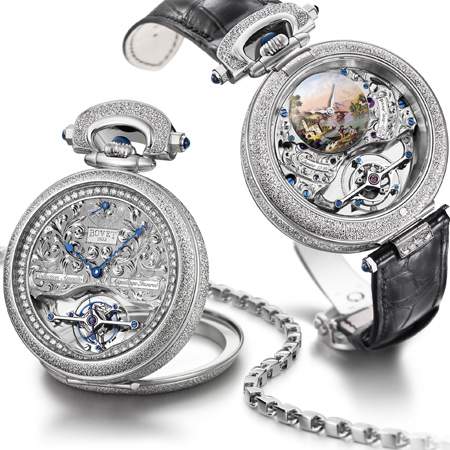 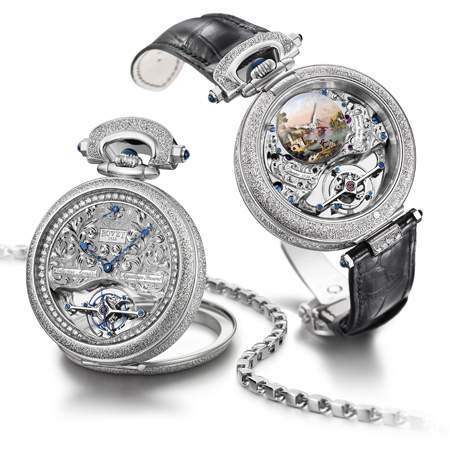 In 2012, BOVET celebrates its 190th anniversary. To mark the event in fitting style, Pascal Raffy and his teams have designed, developed and manufactured new timepieces embodying values that have underpinned the firm's identity for almost two centuries.

BOVET's exceptional historical heritage and the uncompromising expression of every aspect of watchmaking expertise have inspired these new timepieces which, like the Tourbillon Fleurier 0, personalise to an even greater extent the House's unceasing quest for watchmaking excellence and aesthetic refinement.

The Tourbillon 7-Days Reversed Hand-Fitting is already known to collectors. Yet, with identical functions and indications, the Tourbillon Fleurier 0 leaves no doubt as to its innovative character and its decisive role in the quest for perfection tirelessly pursued by BOVET.

As attested by the new position of the tourbillon carriage at 6 o'clock, an entirely new movement beats at the heart of this Tourbillon Fleurier 0. This new geometry has made it possible to improve still further the piece's timekeeping qualities, while offering a degree of visual and symmetrical refinement that elevates its hand-crafted decorative work to an altogether higher level.

Relocation of the tourbillon carriage paved the way for a thoroughgoing revision of the movement's architecture, with all components, save for the tourbillion, supported by two three-quarter plates. While extremely demanding, this type of construction typical of the 19th century ensures rigidity and mechanical uniformity and provides beautiful surfaces on which the House's engravers can express their talents to the full. In addition, it frees up even more space for the regulating organ. It was therefore possible to increase the carriage diameter to 13.50mm, a gain in space that sublimates the magical revolutions of this “horological star”.

Of the movement's 281 components, 66 relate to the tourbillon carriage. Each one has been entirely reappraised and redesigned by the watchmakers of DIMIER 1738 Manufacture de Haute Horlogerie Artisanale, who drew their inspiration from historic timepieces in the private collections of the House of BOVET. Steel components take the emblematic form of period index assemblies. Bevellers have spared no effort in this succession of re-entering angles, rounded off to create a dazzling black polish with clean, bright edges.

The rim of the balance also evokes its glorious ancestors. Its delicate profiles echo the shape of dynamic weights found in the balances of timepieces manufactured by Edouard Bovet in the 19th century. Since these weights are manufactured in blued steel, it is perfectly natural that the balance of this Fleurier 0 should also be resplendent in royal blue.

Of course, the Tourbillon Fleurier 0 features the AMADEO® case, which allows the timepiece to be converted into a miniature table clock, a pocket watch or a reversible wristwatch without the use of any tools whatsoever. A match made in heaven, considering that the tourbillon was invented in the era of the pocket watch to counter the effects of gravity when the timepiece is positioned vertically, and that the Tourbillon Fleurier 0 also offers a second face thanks to its reversed hand-fitting. The latter is displayed on a small offset dial that gives pride of place to a "Léman scene" painting adorning the three-quarter plate.

The exceptional qualities of this Tourbillon Fleurier 0 undoubtedly take BOVET's quest for perfection a step further, fuelling its determination to ceaselessly redefine the noblest expression of the measurement of time.