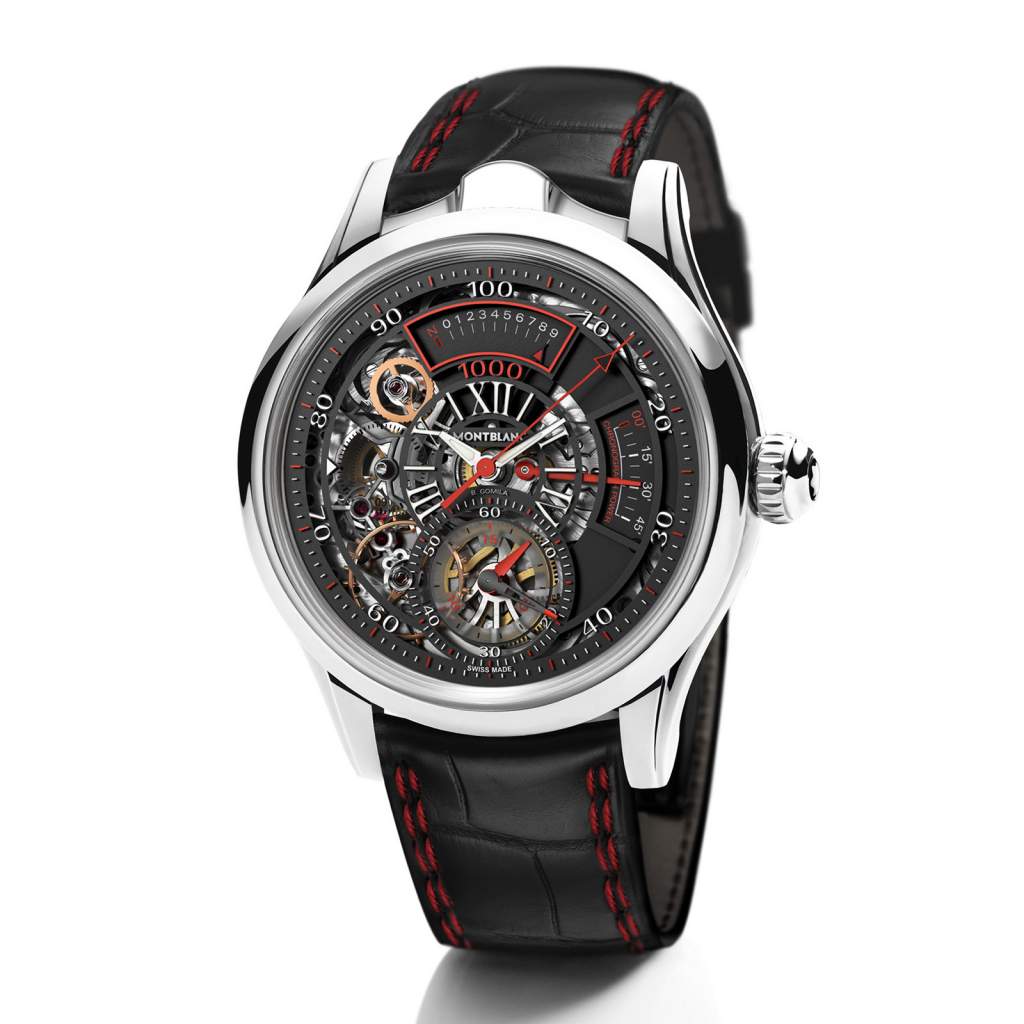 Functions
Hours, Minutes, Seconds, Chronograph
Reference
107343
Year
2012
Collection
Montblanc TimeWriter / 36-pieces limited series
Price excl.VAT
248'400 CHF
Description
The laws of physics are inviolable. The principle of conservation of energy decrees the impossibility of ever constructing a perpetuum mobile. And in order to measure time to the nearest 1/1,000th of a second, a mechanical watch must have a balance that completes 3.6 million semi-oscillations per hour, i.e. its frequency must be 500 hertz. But such laws, it seems, are binding only in the three-dimensional world. They're invalidated when we move into the fourth dimension: time. How else would it be possible for Montblanc to unveil at the Salon International de la Haute Horlogerie in January 2012 a wristwatch chronograph that can measure elapsed intervals to the nearest 1/1,000th of a second, yet has a balance which oscillates at a pace of only 50 hertz?

The Chronographic Paradox:
Montblanc's TimeWriter II Chronographe Bi-Fréquence 1,000
Montblanc's master watchmakers in Villeret have achieved a remarkable feat with the TimeWriter II Chronographe Bi-Fréquence 1,000. One is tempted to describe it as a triumph of mind over matter when this fifty-hertz chronograph is halted after measuring an elapsed interval and shows the span's duration with 1/1,000th-of-a-second precision at first glance. This watch was created in the context of the TimeWriter concept, which inspires the “Fondation Minerva” (that Montblanc founded in 2008) to create timepieces at two-year intervals which advance the great tradition of the authentic Swiss art of watchmaking towards its even greater future. The TimeWriter project also endeavors to support talented and highly promising watchmakers. In accord with this philosophy, the TimeWriter II was realized by the Hispano-Swiss watchmaker Bartomeu Gomila at Montblanc's ateliers in Villeret under the aegis of master watchmaker Demetrio Cabiddu. Born on the Balearic island of Menorca, Bartomeu Gomila completed his training at WOSTEP in the category of “restoration and complicated timepieces” and is the first Spanish citizen to have earned a diploma from this renowned institution of higher learning.

A Pioneer in the Measurement of Extremely Brief Intervals
Founded in 1858, the Minerva manufacture was completely integrated into Montblanc as the brand's haute horlogerie manufacture in 2008. For more than a century, Minerva has ranked among the most famous, limited suppliers of high-quality instruments for measuring brief intervals of time with an outstanding precision. This is true both for watches which combine a display of the ordinary time and a stopwatch function (now generally termed “chronographs”), as well as for classical stopwatches, which serve only to measure brief elapsed intervals. Minerva was among the first to debut a mechanical stopwatch with 1/100th-of-a-second accuracy. This stopwatch, which appeared around 1916 and was redeveloped in 1936, has a large chronograph-hand that completes one full circle every second. Nearly a century later, this timepiece would serve as an inspiration when Montblanc's watchmakers began the project of realizing the Montblanc TimeWriter II Chronographe Bi-Fréquence 1,000.

The 1/1,000th of a Second at a Glance
The ordinary time of day or night is indicated by an hour-hand and a minute-hand at the center of the dial; a rotating disc of sapphire crystal collaborates with an immobile triangular index to track the continually running seconds at “9 o'clock”: both of these displays keep time accurately thanks to a large screw balance which swings at the traditional pace of 18,000 hourly semi-oscillations (2.5 Hz) and is readily visible through the partially skeletonized dial at “7 o'clock.” All other indicators serve the chronograph function, to which this exclusive timepiece devotes the highest priority. The chronograph's little balance can be seen at “half past ten”: when this speed demon is switched on, it oscillates at a rate of 360,000 A/h (50 Hz). These vibrations are so fast that they can no longer be seen by an unaided eye: only a quiet purr can be heard, not unlike the sound of a well-lubricated Singer sewing machine. The chronograph's indicators begin with a red, centrally axial, elapsed-seconds hand: it completes one full 360° rotation every second so that its tip sprints along the hundredths-of-a-second scale on the dial's periphery. A double counter at “6 o'clock” has a longer, red-tipped hand tip to tally elapsed seconds from one to sixty, as well as shorter, all-red hand to count a maximum of fifteen elapsed minutes. A slightly inset cartouche at “3 o'clock” indicates the remaining reserve of power for the chronograph's movement which, when fully wound, will suffice for more than forty-five minutes. The power-reserve display also serves as a helpful indicator for the chronograph because it shows how much longer the chronograph will continue to run beyond the fifteen elapsed minutes it can tally. But the unchallenged pièce de résistance tops the dial at “12 o'clock,” where another cartouche boasts a little triangular arrowhead that runs along an arcing scale calibrated from N (for “neutral”) through zero, and thence to nine-thousandths of a second.

Let the Measuring Begin!
Pressing the button between the horns at “12 o'clock” starts the chronograph: the long red trotteuse begins to race once per second around the main dial, twin counters at “6 o'clock” tally its rotations, the little red hand on the chronograph's power-reserve display gradually progresses upwards, and the 1,000th-of-a-second arrowhead at “12 o'clock” points motionlessly toward the “N”. When the chronograph button is pressed again, the entire system instantly halts and the duration of the elapsed interval can be read: beginning with the number of elapsed minutes on the inner scale on the twin counter at “6 o'clock,” followed by the elapsed seconds on the outer scale of the same subdial, continuing with the hundredths of a second on the peripheral scale surrounding the main dial, and culminating with the thousandths of a second in the cartouche at “12 o'clock.” The entire process is simple, clear, quick and requires no additional calculations.

The Beauty of Technology in 18-Carat White Gold
To assure that full attention can be concentrated on the technical refinements of this extraordinary measurer of brief intervals, the external design of the Montblanc TimeWriter II Chronographe Bi-Fréquence 1,000 exclusively highlights the complexity and beauty of its indwelling caliber. No dial obstructs the view of the complicated movement, which rewards a connoisseur's scrutiny by revealing two balances and numerous hand-polished levers. The curvature of its 47-mm-diameter, 18-carat white gold case flows elegantly into the horns. Montblanc's star-shaped logo is crafted as a mother-of-pearl inlay atop the readily grasped and slightly onion-shaped crown at “3 o'clock.” The chronograph button, positioned midway between the horns at “12 o'clock,” has a harmonious design that fits perfectly into the overall styling.
The Montblanc TimeWriter II Chronographe Bi-Fréquence 1,000 will be manufactured in a limited edition of thirty-six watches, so it will forever remain a rare pleasure. Thirty-six was chosen for the number of watches as an homage to the year 1936, when Minerva built the ultra-fast stopwatch that earned a mention in the Guinness Book of Records.
© Fondation du Grand Prix d'Horlogerie de Genève