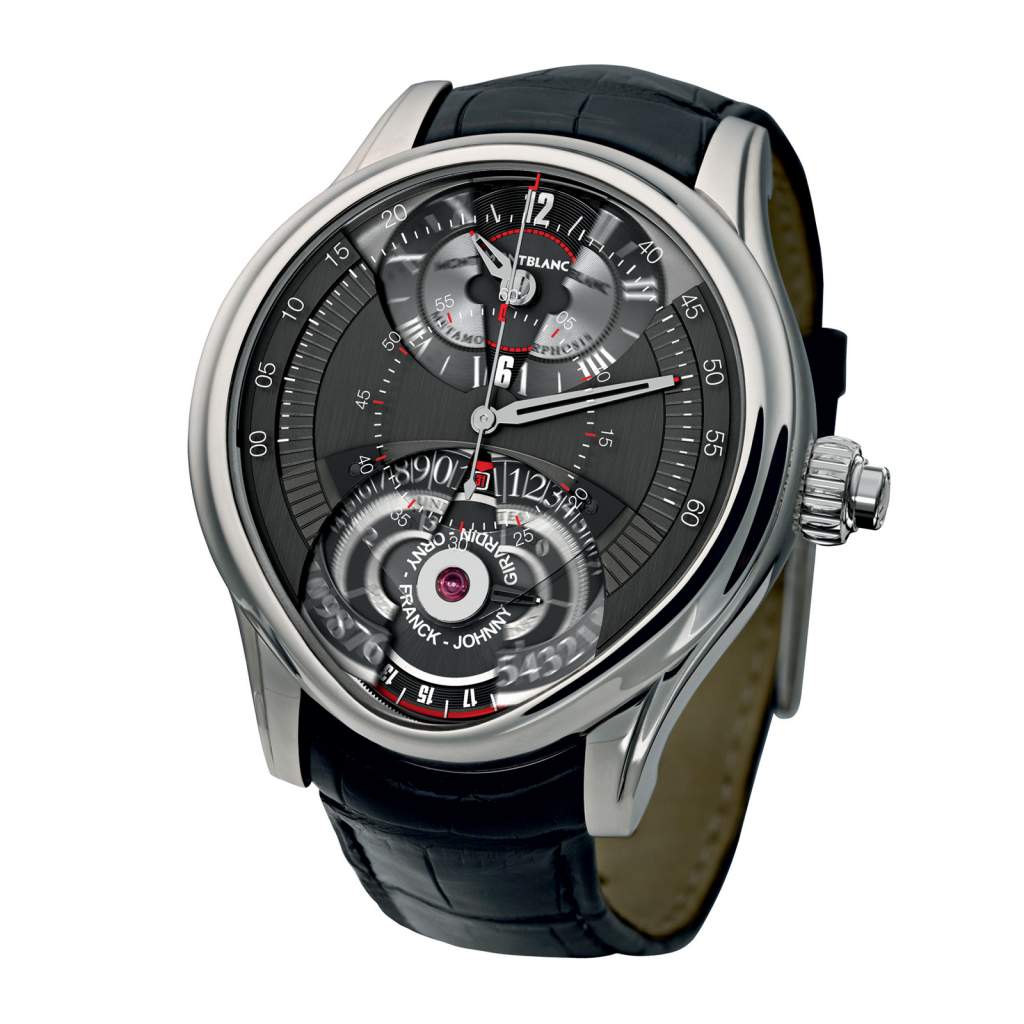 Functions
Hours, Minutes, Seconds, Date, Day, Chronograph, -
Reference
106168
Year
2011
Collection
Montblanc TimeWriter / 28-pieces limited series
Price excl.VAT
313'700 CHF
Description
TimeWriter: Thanks to Montblanc, the Institut Minerva fosters new talent
With the founding of the Institut Minerva de Recherche en Haute Horlogerie, Montblanc has not only dedicated itself toward assuring the survival of a manufacture with a legendary chronographic tradition: the mission of the Institut Minerva is to foster young talents whose new ideas will enrich the art of watchmaking, which they'll enliven with their innovative spirit and dynamism. For this purpose, Montblanc created the “TimeWriter” concept, under which the company wants to introduce projects with independent creators that have great ideas and plan to establish themselves as independent watchmakers. It is foreseen to present a project every two years. Montblanc presents the first development of the Institut Minerva de Recherche en Haute Horlogerie: Montblanc Metamorphosis.

Montblanc Metamorphosis: a watch with two faces and two functions
The Montblanc Metamorphosis embodies a creatively successful response to the following challenge: combining the principles of traditional watchmaking with the creation of something entirely new and unprecedented. This first project of the TimeWriter series, that is based on the Montblanc's own chronograph calibre MB M16.29, has set itself twin goals: to provide starting help to promising young talents and to combine tradition with innovation. With this background in mind, the foundation council at the Institut Minerva was most strongly impressed by the ideas of the two young watch specialists Johnny Girardin and Franck Orny, who envisioned a wristwatch with two faces. Of course, a watch with different functions distributed across two dials is not novel, but the way in which the Montblanc Metamorphosis transforms itself has never been seen before. By moving a slide down or up, this timepiece changes from a wristwatch with hour, minute, second display to a chronograph and vice versa. To achieve this metamorphosis in a purely mechanical manner, the two creators Johnny Girardin and Franck Orny were obliged to use all their skills as watchmakers and to borrow methods from the art of automatons construction – a traditional métier which, like watchmaking, has long been practiced in Switzerland's Jura region. As a prefect blend of tradition and innovation, the revolutionary transformation mechanism is based on the magnificent, hand crafted chronograph calibre MB M16.29.

The Face of Civil Time
Prior to its metamorphosis, the beholder sees a large and teardrop-shaped case with a dial that offers an unusual display of the ordinary time of day, also known as “civil time.” A regulator-style subdial with a lone hour-hand and a wreath of Roman numerals occupies the “12 o'clock”
position, while a retrograde minute-hand sweeps its arc between the “8” and the “4” from the center of the main dial. A large seconds-hand, which shares this same central axis, completes one full circle per minute. A hand-type date display is located at 6 o`clock. The aforementioned hands combine to indicate the current civil time and the date. But as soon as an interested watch aficionado pulls the slide on the left-hand flank of the case downward from the “10” to the “8,” this extraordinary timepiece begins a metamorphosis which transforms it into a chronograph within approximately fifteen seconds.
The Transformation
As occurs between two consecutive scenes on a theater's stage, here too on this watch's dial an impressively quick change ensues during the metamorphosis. Four wings in the lower half of the face open, slide under one another, and finally disappear to the left and right beneath the dial's middle bar. A similar sequence transpires with two wings on the regulator's hour dial at the “12.” After all the wings have opened, a subdial rises like the floor of an elevator at the 6 o`clock position, an aperture in this rising disk “swallows” the date-hand. The newly risen rotating disc is the minute counter of the chronograph. This fully mechanical, elevator-like function will no doubt evoke the admiration of aficionados of the fine art of watchmaking who witness this unprecedented transformation.

The Face of Measuring Short Intervals of Time
After its metamorphosis, this masterpiece of mechanical timekeeping presents a countenance devoted entirely to the chronograph function. The face for displaying civil time had a rather conservatively elegant appearance with Roman numerals and a classical black-and-silver color scheme; but after transformation, the chronograph's dial relies on Arabic numbers and red accents to emphasize the sportily technical aspect of an instrument that's built to tally short intervals of time. The hours are shown on a subdial at 12 o`clock such as before and the retrograde minutes are still shown from the centre. The continuous seconds hand has become the central chronograph hand, and the risen turning disc at “6” offers an unusual detail: it bears an elapsed-minutes scale calibrated from 01 to 31. A motionless index on the dial's central bar indicates which minute is presently being tallied. The
reason why this scale is calibrated for 31 minutes is not due to a technical consideration, but simply because its designers opted discreetly to allude to the fact that a date scale can occupy this position too. The future owner of this unconventional timepiece will no doubt appreciate precisely such details, especially when he or she sees that each of these two displays acts with complete mechanical independence of the other. While the elapsed-minutes disk turns continuously, the date-hand moves “semi-instantaneously.”
© Fondation du Grand Prix d'Horlogerie de Genève