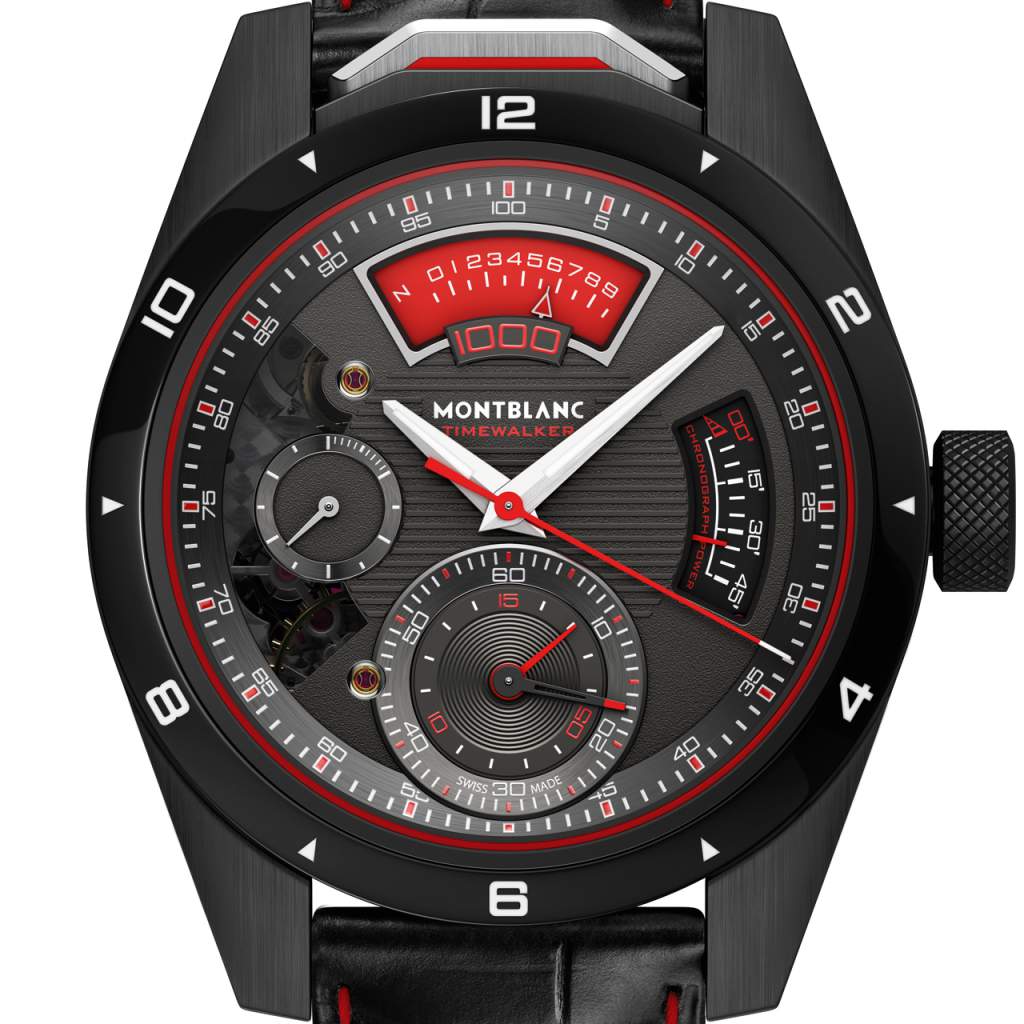 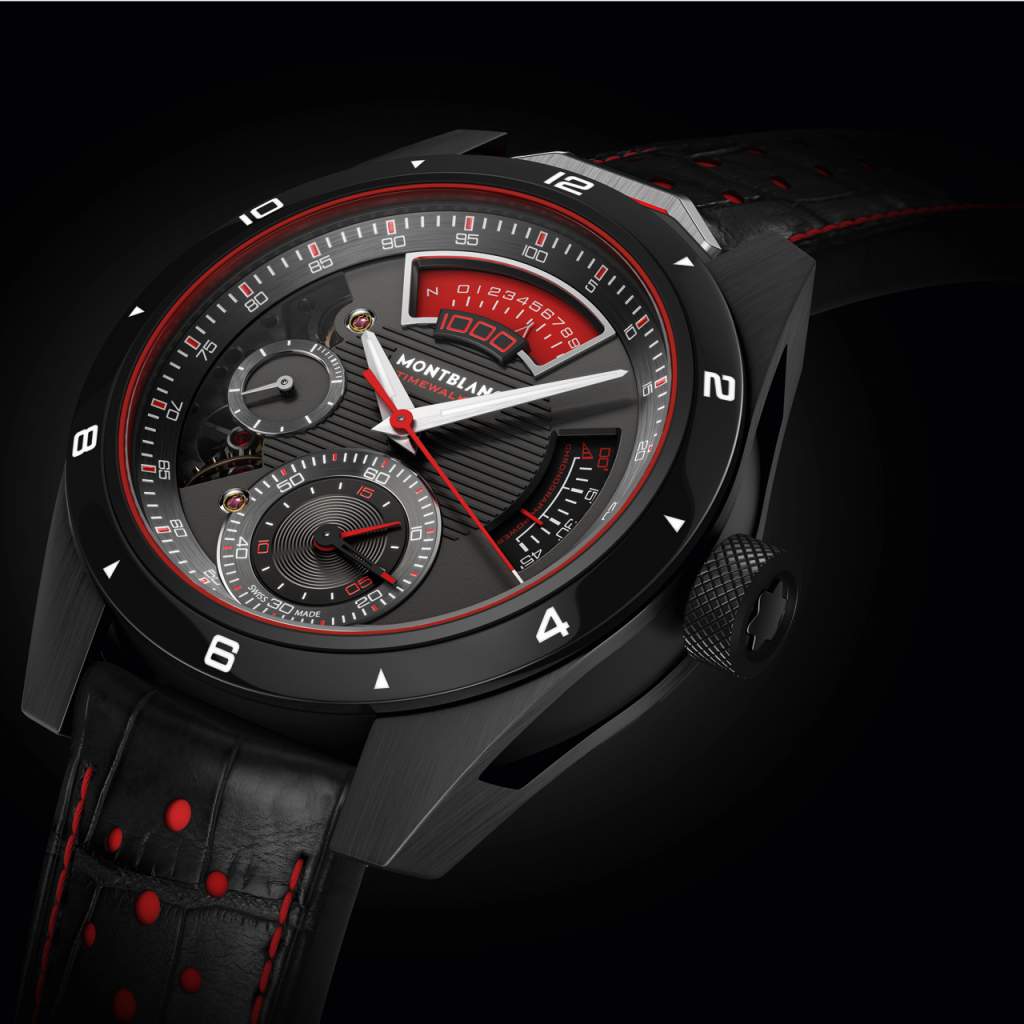 A sophisticated combination of high-tech materials has been chosen for the Montblanc TimeWalker Chronograph 1000 Limited Edition 18, starting with the 46.4 mm titanium case and semi-skeletonized horns that have all been satinated and treated with a black DLC coating for ultimate scratch-resistance, robustness and lightness. The case is complemented by a titanium monopusher at 12 o’clock and a fixed black ceramic bezel that has been engraved with white Arabic numerals that characterize the overall design of the line and accentuate its legibility and performance. The dial is a multi-layer construction with black horizontal stripes, red indications and a red gasket, which is framed by a smoked sapphire crystal, enhancing the sporty and racing aesthetic.

The heart of the matter

Recording the time to 1/1000th of a second is a feat of horological engineering. The Montblanc TimeWalker Chronograph 1000 Limited Edition 18 works thanks to one movement with two hearts: the first heart indicates the time functions, and the second one is in charge of the chronograph indications. The hours and minutes are at the centre of the dial with the addition of a small second counter with a rhodium-plated hand at 9 o’clock. The hour, minute and second displays keep time accurately thanks to a large balance with 18 screws, which beats at the traditional pace of 18,000 semi-oscillations per hour. This balance wheel is partially visible through the skeletonized dial at 7 o’clock. All other indicators serve the chronograph function, to which this exclusive timepiece devotes the highest priority. The chronograph’s small balance can be seen at 10 o’clock showing oscillations at a rate of 360,000 semi-oscillations per hour (50 Hz). In order to allow a finer adjustment and then further improve its precision, the chronograph’s small balance wheel has been equipped with two hairsprings, which are fixed on top of each other.

When an elapsed interval is being measured, the chronograph’s elapsed 100th of a second hand orbits the entire dial once per second. But rather than occurring as a smooth progression, this circular motion is sub-dived into 100 individual steps which the naked eye cannot distinguish from one another. The chronograph’s centre-wheel, to which the central chronograph hand is affixed, likewise jumps from one tiny step to the next in a hundredth of a second increments. However, the thousandths of a second are measured in an entirely different way. In order to go further and measure a thousandth of a second, the Montblanc engineers had to innovate. They developed a movement with a balance beating with a frequency of 360,000 semi-oscillations per hour. This rapid oscillator completes 100 to-and-from motions per second, i.e. 50 times in one direction and 50 times in the other. This tempo not only guides the motion of the 1/100th dedicated mechanism, but it also sets the pace for delivering an impulse of energy that sets into rotation an innovative wheel in the gear train, the so-called “thousandth wheel”. Powered in this fashion, it rotates around its own axis at a uniform speed of ten rotations per second and thus provides the resolution with which hundredths of a second can be further divided into sets of ten increments. The chronograph is controlled by a two-level column-wheel: one level controls the whip to start, stop and reset the seconds, minutes and the thousandths of a second, and the other level guides the hammers to reset the seconds and the minutes. The reset of the 100th-of-a-second hand is accomplished in a particular way thanks to a disc with a catch at the centre of the movement. This catch, made of an alloy of copper, improves the reliability of the mechanism. Rather than remaining continually in motion, the separate balance for the chronograph begins to vibrate only when the start function is activated by a flexible steel lamella or whip mounted behind the arrowhead of the chronograph rocker. When the stop function is triggered, this slender steel plate stops the small 50-Hertz balance and holds it motionlessly in place until it is needed again. The chronograph function is powered by its own barrel, which stores enough energy to measure intervals of up to 45 minutes in duration. An elapsed-time measurement can be indefinitely extended by turning the crown anti-clockwise while the chronograph is running, thus adding fresh energy to the chronograph’s barrel. The going train for the ordinary time display draws its energy from a second barrel that guarantees a 100-hours of power reserve. This long-lasting power reserve also contributes to the regularity of the amplitude of the balance beating at 360’000 oscillations per hour which, in turn, enhances the precision of the time measuring—a decisive advantage for accurately measuring intervals to the nearest thousandth of a second.

The Montblanc TimeWalker Chronograph 1000 Limited Edition 18 is surprisingly easy to read as it follows a familiar pattern that is found on the vast majority of chronographs. A double counter at 6 o’clock has a longer, red-tipped hand to tally elapsed seconds from 1 to 60, as well as a shorter, all-red hand to count a maximum of 15-elapsed minutes. The chronograph’s indicators begin with a red, centrally axial, elapsed 100th of a second hand that completes one full 360° rotation every second so that its tip sprints along the hundredths-of-a-second scale on the dial’s periphery. The thousandths of a second is displayed at 12 o’clock on a cartouche inspired by the speedometer of vintage car dashboards, where a triangular red pointer progresses along a scale calibrated from 0 to 9. The resting position is indicated by the letter “N” (for neutral), leaving the 0 to clearly indicate the thousandths, i.e. one full 100th of a second. A slightly inset display at 3 o’clock indicates the remaining reserve of power for the chronograph’s movement which, when fully wound, will operate for more than 45 minutes. The power-reserve display also serves as a helpful indicator for the chronograph because it shows how much longer the chronograph will continue to run beyond the 15-elapsed minutes it can tally.

The mainspring for the ordinary timekeeping movement is wound by turning the crown clockwise (the power reserve is about 100 hours). Turning the crown counter-clockwise winds the separate mainspring for the chronograph’s movement, which delivers optimal measuring results for more than forty-five consecutive minutes. To tally lengthier intervals, power can be conveyed to the chronograph’s barrel by turning the crown while the chronograph is running. Pressing the button between the horns at 12 o’clock starts the chronograph and sets the long red chronograph second hand in motion as it races around the main dial once per second. Double counters at 6 o’clock tally its rotations. The small red hand on the chronograph’s power-reserve display gradually progresses upwards, and the 1,000th-of-a-second arrowhead at 12 o’clock points motionlessly toward the “N”. When the chronograph button is pressed again, the entire system instantly halts and the duration of the elapsed interval can be read: beginning with the number of elapsed minutes on the inner scale on the double counter at 6 o’clock, followed by the elapsed seconds on the outer scale of the same subdial, continuing with the hundredths of a second on the peripheral scale surrounding the main dial, and culminating with the thousandths of a second in the display at 12 o’clock. The entire process is simple, clear, quick and requires no additional calculations. This revolutionary timepiece is testament to how Montblanc has never stopped innovating by always pushing the boundaries of what is technologically possible. Equipped with Montblanc’s Manufacture Calibre MB M66.26, this manually wound monopusher chronograph is decorated to the finest standards of Swiss watchmaking with decorations and finishings that include Côtes de Genève, circular graining, hand chamfering and burnishing. In addition to the ingenious mechanics, the Maison knows how to complement its inventions with harmonious designs that, in the case of the Montblanc TimeWalker Chronograph 1000 Limited Edition 18, capture the spirit and adventure of those early racing drivers, their magnificent racing machines, and the passionate officials who meticulously timed them using Minerva’s precision instruments. This Limited Edition captures it all in a timepiece that marks a new chapter in Montblanc’s history.