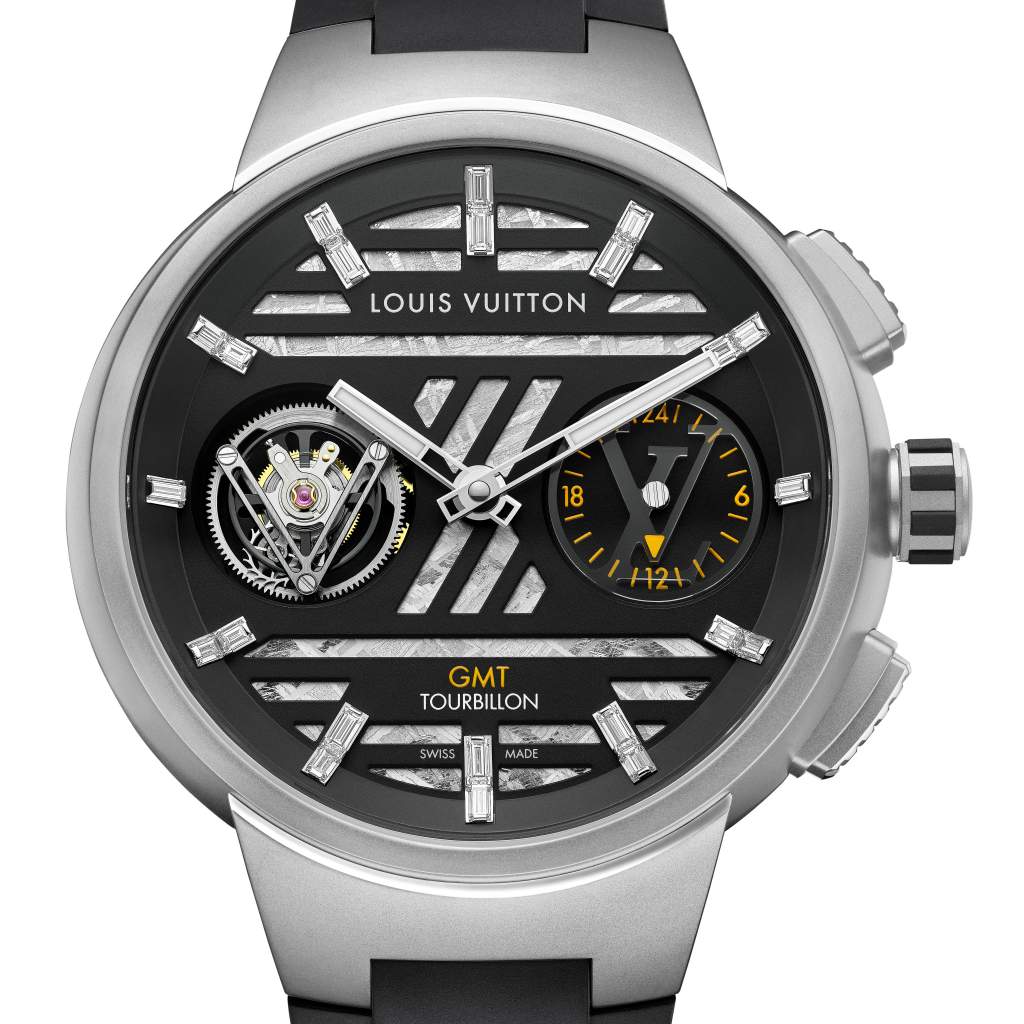 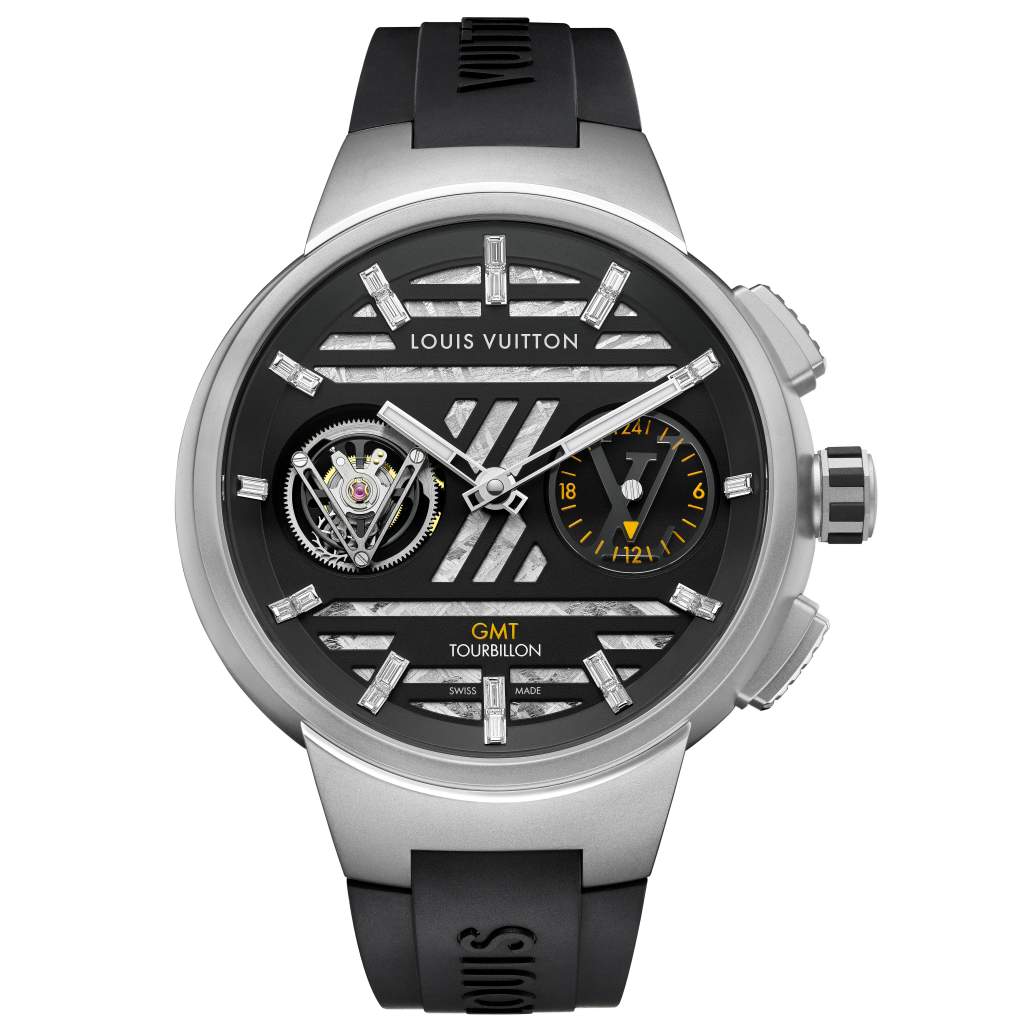 Rooting an icon in its time demands true stylistic flair. By giving the Tambour Curve GMT Flying Tourbillon an innovative graphic look, a signature of its high-watchmaking collection, Louis Vuitton guarantees that this complication watch dedicated to travel  will take off and open up new horizons.

Inspired by the travel spirit

Further enriching the range of timepieces conceived, developed and produced in La Fabrique du Temps Louis Vuitton, the Tambour Curve GMT Flying Tourbillon features a case whose shape is an extrapolation of those of the Tambour Curve Flying Tourbillon Poinçon de Genève, launched last year. This acclaimed, high-impact design presents a modern, contemporary look with a luxury that is all about understatement. The design, considered one of the most successful and dynamic on the market, gives  it a graphic signature inspired by the original Tambour watch launched in 2002 whose curves were inspired by the architecture of the most stunning international airport terminals. The Tambour Curve GMT Flying Tourbillon stylishly demonstrates the way  in which shape influences function and vice-versa.

Extrapolated from the Möbius strip, the 46 mm case middle on this timepiece, made  of shot-blasted Grade 5 titanium, deconstructs the circle. Stretched and elongated, it catches the eye with the convex curve of its bezel and crystal. With this innovative view from both the front and the side, it propels the Tambour Curve GMT Flying Tourbillon into the imagination, the tangible expression of a perpetual invitation to travel.

This effective, intuitive watch redefines traditional watchmaking heritage. Designed to display a second time zone on the dial, it features two push-pieces on its right side. These are used to simplify the setting of the GMT, allowing the dedicated indicator, positioned within the open counter at 3 o’clock, to move forwards or backwards.  These efficient push-pieces are positioned in the same way as the chronograph ones, intentionally creating visual confusion with this popular timepiece. But they also reinforce the symmetry of the case of the Tambour Curve GMT Flying Tourbillon, allowing the observer to savour its perfect, soft proportions. Designed to accompany its owner wherever they are in the world and on all their adventures, the Tambour Curve GMT Flying Tourbillon is available in an entirely titanium version with its dial carved out of the Gibeon meteorite that landed in Namibia and hour markers set with baguette-cut diamonds. Taking refinement to its pinnacle,  the shot-blasted horns screwed down to the case, are adorned with a delicate  polished thread at the joint. The aim of this treatment is to enhance its architecture  and emphasise the dynamics and aesthetic coherence of this timepiece, already considered to be an icon of watchmaking design.

The true face of this timepiece, the dial of the Tambour Curve GMT Flying Tourbillon has been given a refined contemporary look, down to the smallest detail. Openworked without being truly skeletonised, it is crafted in two separate parts in order to present  a strong, minimalist architecture conducive to reading the time. The “V” for Gaston Vuitton logo punctuates the dial on the flying tourbillon carriage at 9 o’clock. It can also be spotted between the counters where, through dovetailing and relief effects created with the delicately sunray-brushed grey, pink gold or meteorite dial, it depicts the silhouette of an hourglass – an allusion to a historical instrument often used to symbolise the passing of time.

But of all the components visible beneath the sapphire crystal, the hour markers  are certainly the most astounding. Suspended from the flange whose complex outline follows that of the case, they have been machined individually to follow the curve  of the dial, once fitted. They also feature a solid block of luminescent material made of Super-LumiNova® rather than simply being coated in the material. This produces a much more powerful and lasting glow in the dark and reinforces the cutting-edge element of the watch. On the titanium and meteorite version, the luminescent material is replaced by baguette-cut diamonds set into each hour marker. These rigorously selected jewels extracted from the depths of the Earth combine beautifully with the polished disc taken from a meteor that came from the depths of the universe.

Committed to offering the very best, La Fabrique du Temps Louis Vuitton has finely crafted the timepiece’s finishing touches. The push-pieces, which move in a supple manner under pressure from the finger, move the transparent disc with LV logo forwards or backwards to indicate the time of the second time zone, displayed at 3 o’clock.

As for the winding crown, in order to ensure a good grip when setting the time or winding the calibre, it incorporates slightly protruding rubber parts.

Since its foundation, La Fabrique du Temps Louis Vuitton has been creating original, exclusive, bold and competitive complications. Taking this idea to its natural conclusion, it has developed its own self-winding mechanical movement, the calibre LV82.

As befits a Louis Vuitton high watchmaking movement, it is regulated by a flying tourbillon whose lightweight carriage presents the letter “V” introduced by Gaston Vuitton. Its balance, vibrating to 4 Hertz, ensures that the timepiece functions with maximum precision. It also features the useful GMT, an example of subtle mechanical excellence dedicated to the art of travel.