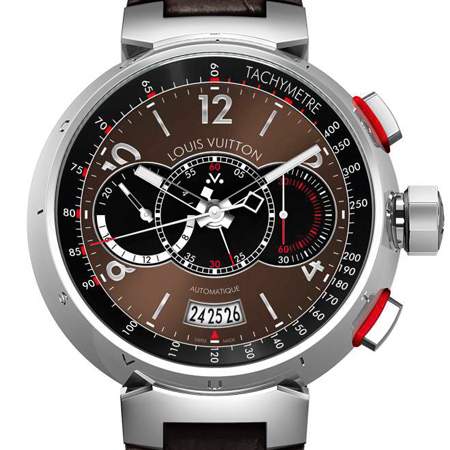 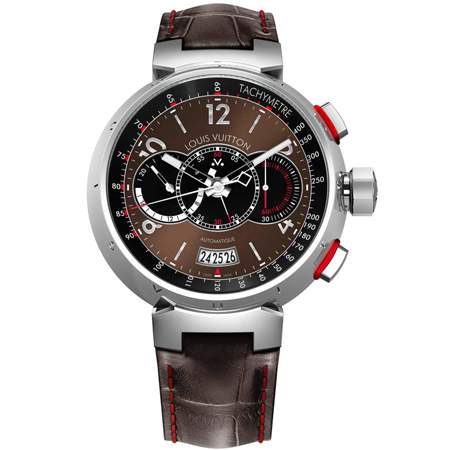 VOYAGEZ, VOLEZ!
Louis Vuitton continues with its voyaging spirit by inaugurating a new chapter in its watch-making history, with an extraordinary capsule dedicated to travel.
A new timepiece story for men attracted to adventure and exclusivity, men who love to mix functionality and design.
Each piece plays the role of a House ambassador, paying tribute to travel, one of Louis Vuitton's core values.
An honour characterised by a new signature in the dials, a V for voyage, a stylised V, an adapted V…

VOYAGEZ!
A V surrounded by two points, two wheels, to symbolise a car: the signature of the Automatic Tambour Chronograph “TACHOMETER”.

A sporty vintage chronograph with a dial inspired by the dashboards of vintage racing cars, with its three auxiliary counters aligned between 9 o'clock and 3 o'clock. A few touches of red enliven this sunny grey dial and heighten its automotive feel, marking its tachometer scale, an essential tool for travel on land. The graduation on the border of the dial makes it possible to precisely define an average speed. How does it work? By releasing the chronograph hand over the distance of one kilometre. Once stopped, it indicates the average speed of this kilometre on the tachometer scale. It's child's play!

Driven by the LV172 automatic calibre from the Dubois-Dépraz workshops and offering a 42-hour power reserve, the Automatic Tambour Chronograph “TACHOMETER” displays its chronograph functions (chronograph hand and 60-minute totaliser in the centre, 24-hour indicator and seconds dial) and large gradual date change display at 6 o'clock.

An invitation to travel nestled in a masculine steel Tambour case with its 44 mm diameter, recognisable with the 12 letters of Louis Vuitton engraved on the side as if counting down the hours and set on a coated braided carbon fibre strap.

VOLEZ!
A V surrounded by two wings symbolising a plane: the signature of the Automatic Tambour Chronograph “FLY BACK”.

A bold chronograph whisks us away to landing strips marked by innumerable landings and takeoffs. In two tones, set off by dashes of yellow, a reference to the couture thread, its dial presents two auxiliary counters inspired by aeronautic instruments, while the clear zone strangely resembles the aluminium pieces of old plane cabins riveted together. Its precise graduation engraved in yellow on the edge of the dial introduces the “Fly Back” function, an essential tool for air travel. A function that pilots could not do without until the arrival of electronics for their flight calculations. It makes it possible to put the chronometer back to zero again and to instantly start it by pressing and immediately releasing the reset button.

Driven by the LV 137 automatic calibre from the Dubois-Dépraz workshops and offering a 42-hour power reserve, the Automatic Tambour Chronograph “FLY BACK” displays its chronograph functions (chronograph hand in the centre, 30-minute totaliser and seconds dial) and date display at 6 o'clock. A professional instrument nestled in a masculine steel Tambour case with its 44 mm diameter, recognisable with the 12 letters of Louis Vuitton engraved on the side as if counting down the hours and set on an alligator strap enriched with a rivet engraved with the House V.

Two new models, including one, the Automatic Tambour Chronograph “TACHOMETER”, that will also be offered in pink gold. Three new references exclusively available in limited editions. The “Voyagez” capsule will eventually be integrated with brown dials in the permanent collection.