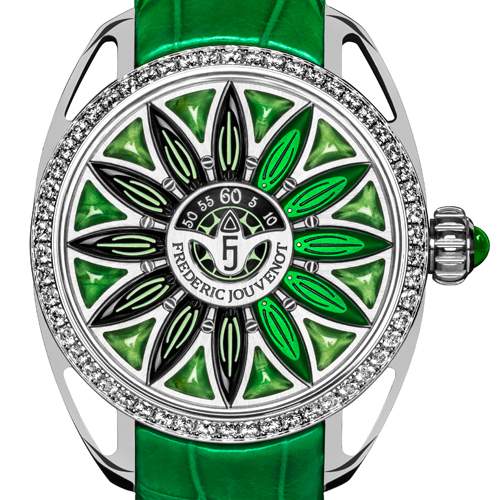 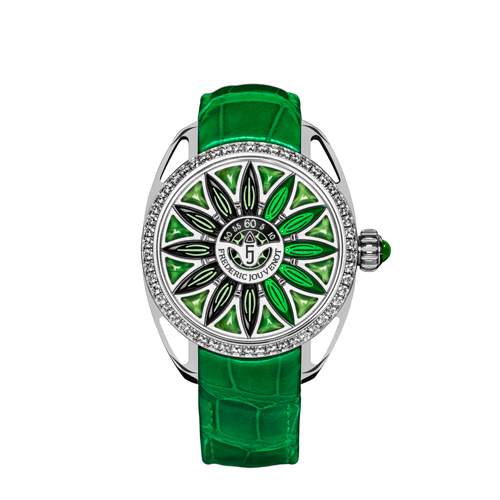 A world premiere for a jewellery watch, a flower display show the time with 12 jumping petals!

Called Surya, in reference to the INDIA God of sun, the sun-shaped hour display is unique. It is the first hour display over 24 hours that shows the sun’s path and the alternation of night and day.

Simple to read yet fitted with a complex mechanism, this piece in Frédéric Jouvenot’s Solar Deity collection has two faces, corresponding to the day and night cycles. For the first time in watchmaking history, a timepiece displays the time without conventional hands, numerals or disks.

Each hour is represented by a radioconcentric flower’s petals, i.e. starting from the centre and radiating towards the edge of the dial. The twelve petals show the path of the sun on the dial while indicating the hour to come and the past hour.

At mid-day, all the petals are green to represent daylight. At that precise moment, the dial represents the sun at its zenith. As time passes, the rays become black, one after another, clockwise; the dial darkens and announces oncoming night. Midnight is represented by twelve dark petals reflecting in the night. To symbolise the return to light, the petals take turns to pivot again until mid-day, thus completing a full 24 hour cycle.

Telling the time remains instinctive. Each hour keeps its conventional position and the minutes are indicated by a central cartouche fitted with an index that completes a revolution on the fixed minute disc. The display maintains the conventional angular gap of a watch for instinctive reading.
The whole complication mechanism is enclosed in the central 12 mm diameter and 5 mm high case which contains no fewer than 100 parts, including 24 rubies which will activate the hour’s jumping petals.

Example: at 3.30 p.m., the first three petals are black and the minute indicator points to 6 o’clock, as on a conventional dial. The conventional angular gap between 3 o’clock and 30 minutes is thus maintained. Herein lies the feat accomplished by Frédéric Jouvenot; having maintained conventional reading of the dial with a revolutionary hour display system.

For this very feminine version made in white gold the bezel set with 54 round diamonds totaling 2.15 carats. Furthermore and it is rather rare to specify it in the environment of the jewellery a particular technique of suifage of Tsavorites allows to distinguish precious stones in three dimensions in the dial following the original design of petals. The crown set with the same stone for a design of cabochon. Several months of work and development were necessary to realize just one dial. Indeed, the stones are adjusted with 0.01mm of precision.The noble mixture of the various materials, colors and forms of the set is simply magic to contemplate.

The automatic movement was realized in the watch-making tradition with a pendulum with screws, the finish of bridges with côtes of Geneva and polite angles.