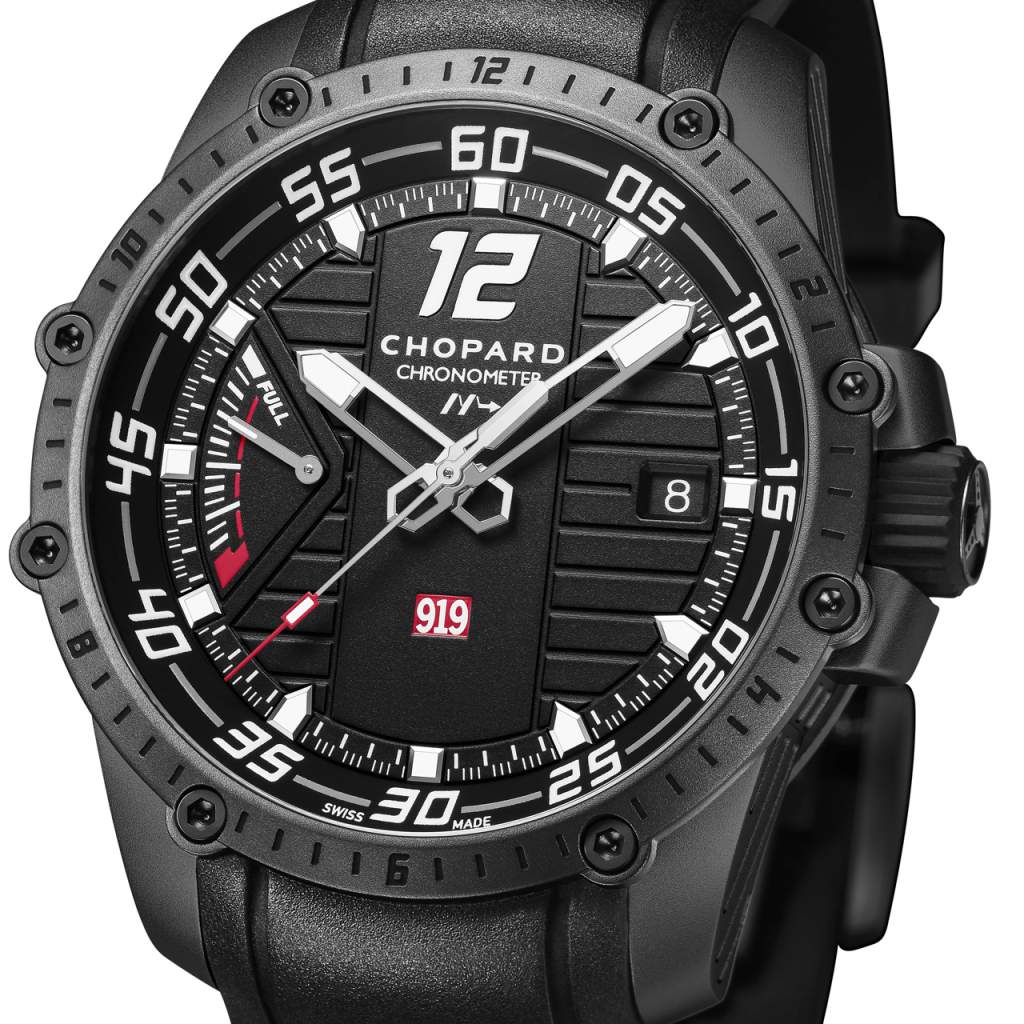 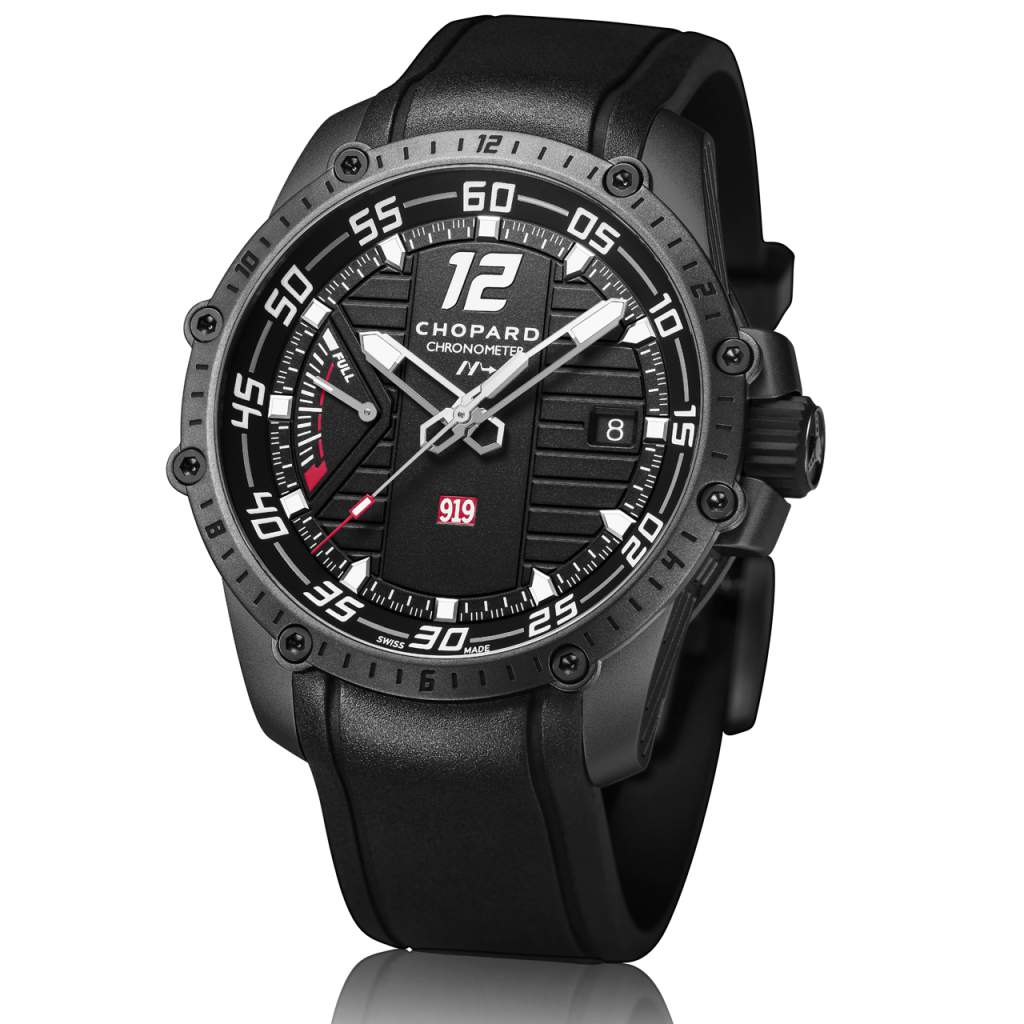 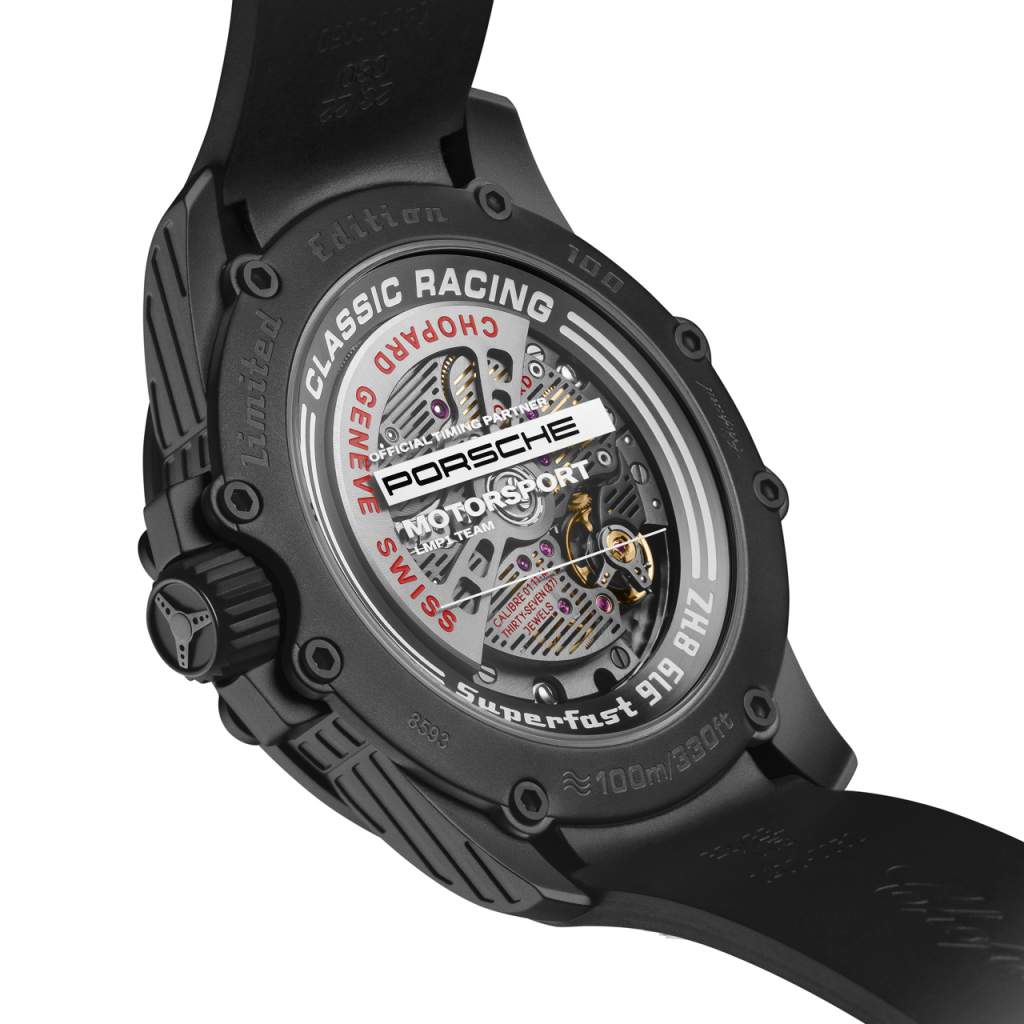 Lightness, efficiency, technicality: the new Chopard high-frequency watch epitomises pure performance. The Superfast Power Control Porsche 919 HF Edition is a tribute from the Maison to its partner Porsche Motorsport’s success in the FIA World Endurance Championship (WEC). It has a lot in common with the car that has been monopolising the podium at the various championship events: the Porsche 919 Hybrid. Further proof of the technical and performance-oriented culture defining Chopard watchmaking.

Partnering the Porsche Motorsport LMP1 team since its return to the Endurance championship in 2014, Chopard is launching a limited series to celebrate the many successes achieved by the Stuttgart-based manufacturer in the World Endurance Championship. Thanks to the 919 Hybrid, Porsche won back-to-back titles in 2015 and 2016. In tribute to this incredible embodiment of technology, power and efficiency, Chopard has transposed its virtues into an all-black-clad high-frequency chronometer. The Chopard Superfast Power Control Porsche 919 HF Edition stems from the performance-driven culture characterising both Chopard and Porsche Motorsport.

The technologies used by Chopard to create Superfast watches bear strong similarities to those featured on the Porsche 919. The car chassis is made of aluminium and carbon fibre composite to ensure maximum lightness and rigidity. The Superfast Power Control Porsche 919 HF Edition is made of beadblasted titanium that is ultra-light, comfortable and resistant. The latter quality is reinforced by a black DLC treatment based on the technical possibilities afforded by carbon and rendering this timepiece virtually scratchproof.

The Porsche 919 is powered by a 2-litre, 400hp V4 turbo engine, coupled with a 500hp electric engine. Chopard calibre 01.11-M is also a hybrid. It was entirely developed, produced and assembled within the workshops of Fleurier Ebauches and represents a watershed between two generations of materials. It is made of brass and steel, with a silicon oxide escapement at its heart. The turbochargers of the 919 are maintained at optimal rpm by an electric engine, thus enabling maximum acceleration thrust. In much the same way, Chopard calibre 01.11-M operates at the ultra-high 8Hz frequency that Chopard is the only watchmaker to use and master.

Its regulating organ oscillating at 57,600 vibrations per hour boasts an exceptional rate-resumption capacity. In case of jarring or vibrations, which are of course extremely frequent during the World Endurance Championship, the precision of Chopard calibre 01.11-M is protected by this brisk cadence. Just like the Porsche 919 which regularly sets new energy efficiency records, the Superfast Power Control Porsche 919 HF Edition flaunts a run time of around 60 hours, whereas its energy-consuming high frequency would normally have implied reduced autonomy. Sophisticated fine-tuning has enabled Chopard to maintain this generous power reserve.

Above and beyond these similarities with the Porsche 919 Hybrid, the Superfast Power Control Porsche 919 HF Edition is an integral part of the Superfast collection. Its broad 45 mm diameter makes it a distinctive chronometer, dedicated to racing buffs, aficionados and drivers. Its wide bezel is secured by eight black PVD-treated steel screws, giving it a first technical touch – an impression subsequently reinforced by the new model’s hands. The latter are cut-out and therefore extremely light, as well as being well contrasted and broad to enhance legibility. The contrast theme is also picked up on the minute circle graduated with Arabic numerals like a rev counter, as well as on the railway-track scale with its super-fine graduations, the hour-markers, the date and the power-reserve indicator – all of which appear in white against the black background of a matt dial.

The dial bears the four signatures that define the personality of the Superfast Power Control Porsche 919 HF Edition. The first is the Chopard logo, spelt out in straight, clean-cut baton-type letters. The second is the “Chronometer” inscription recalling that this watch is equipped with a movement chronometer-certified by the COSC, reflecting the permanent demand for chronometer-level precision sought after by Chopard and its co-president Karl-Friedrich Scheufele. The third signature is the letter H with an arrow sign characterising Chopard high-frequency watches; while the fourth and last is the white-on-red number 919, a nod to the Porsche 919 Hybrid that inspired this 100-piece limited series.

The sporting nature of the Superfast Power Control Porsche 919 HF Edition is visible in each and every detail. Its strap is made of smooth rubber like the huge slick tyres of the 919, featuring a uniform surface that enhances traction and performance. The finishing of calibre 01.11-M is inspired by car engines. Its bridges are openworked with thin parallel lines and its rotor is skeletonised. Its broad crown is protected by a dedicated rubber moulding and guard, thus ensuring improved security and a firmer grip.

The Superfast Power Control Porsche 919 HF Edition is an impressive watch featuring an ‘engine’, materials, technologies, treatments and settings that are all worthy of a finely tuned racing car.

Chopard and Porsche Motorsport definitively share a love of automobile engineering and of quality tested in the most demanding environments.