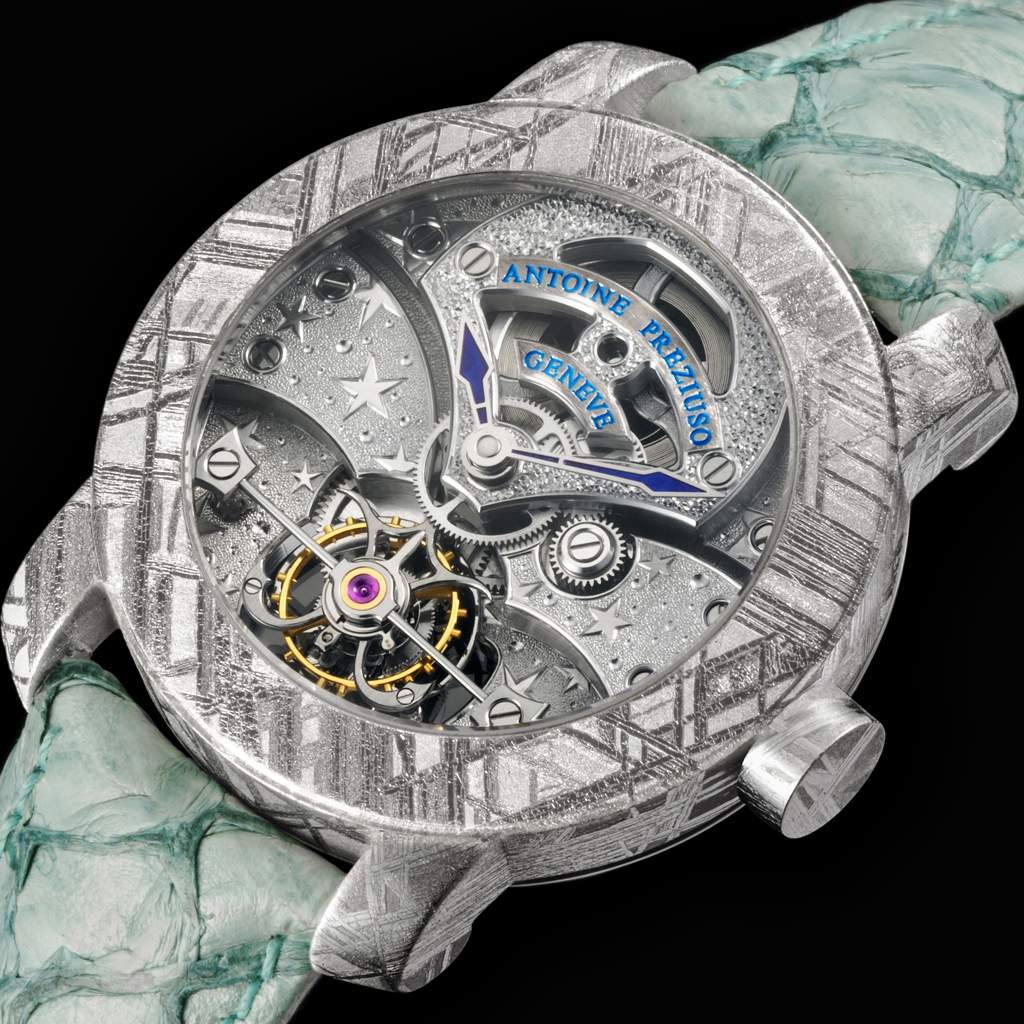 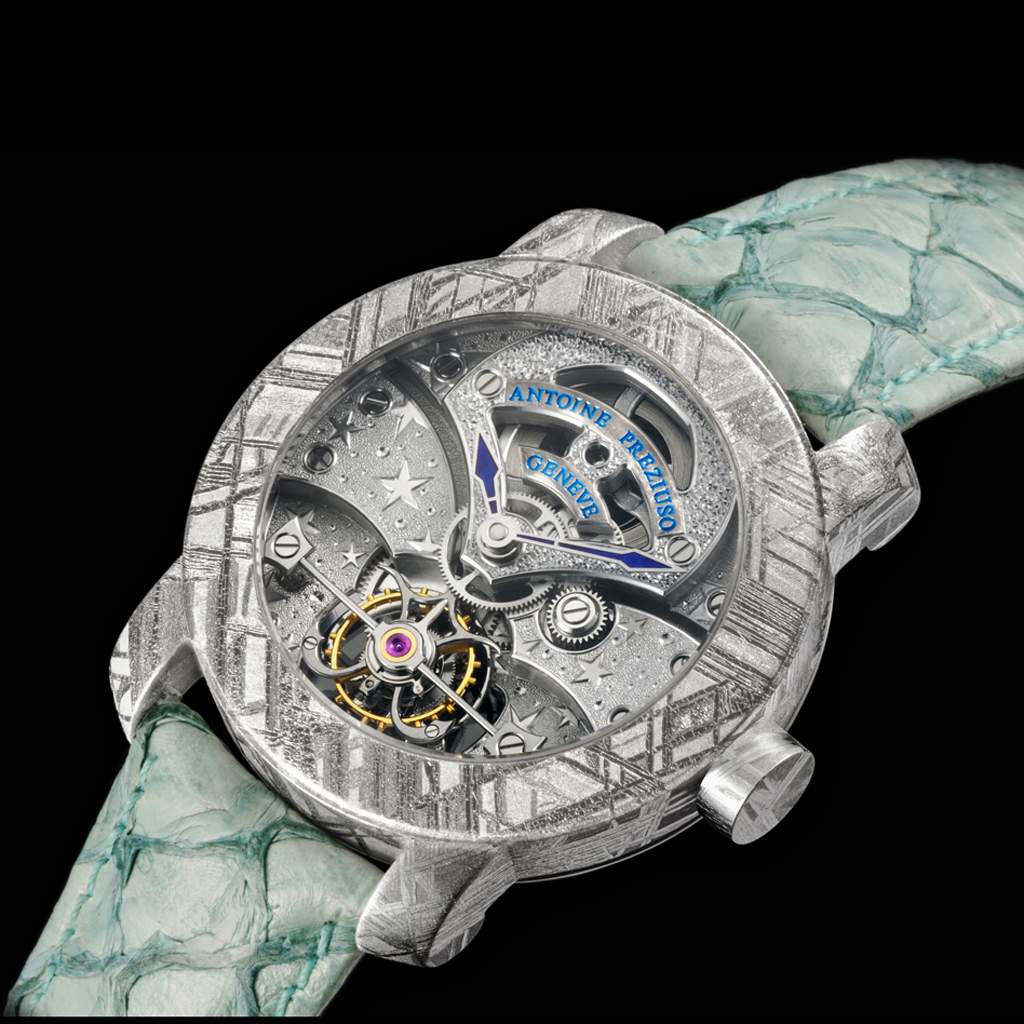 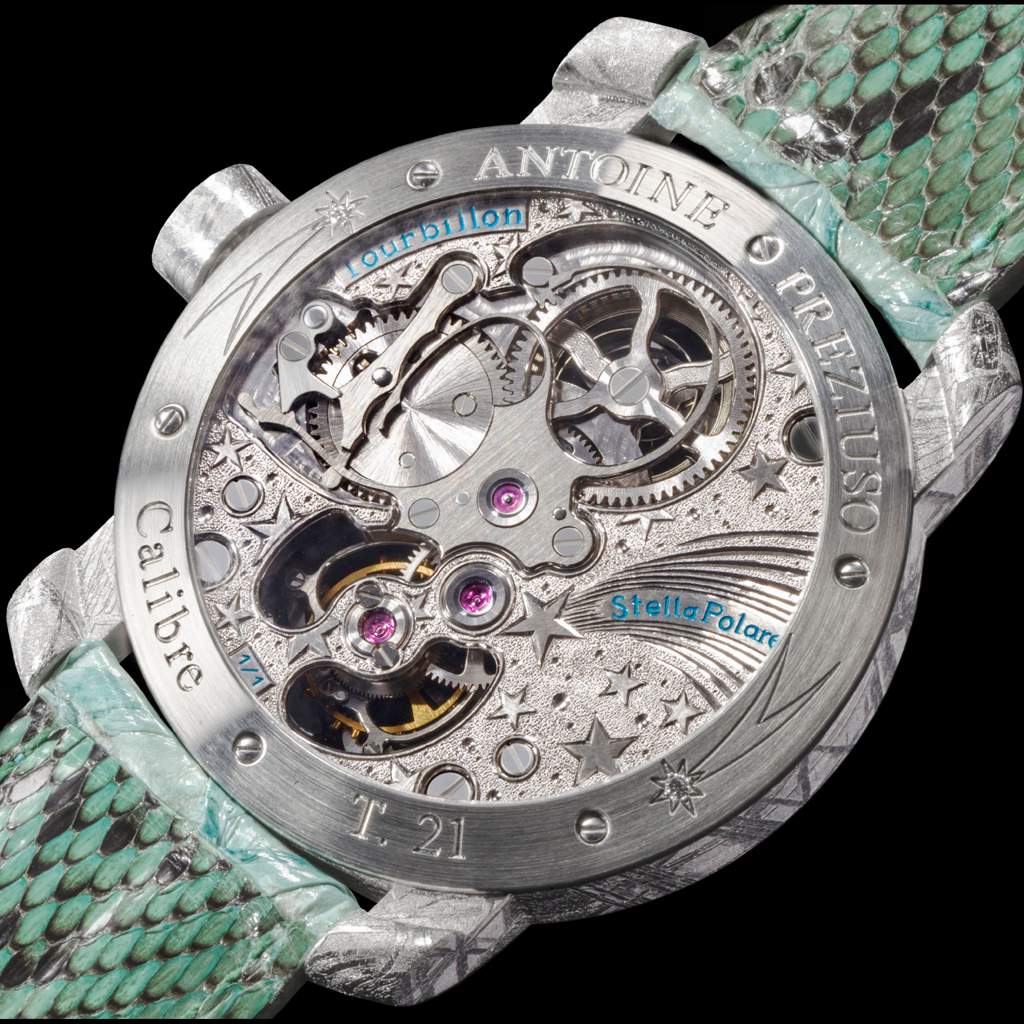 WHEN A STAR MEETS HER STAR

The power of Nature and the hand of Man have combined to create the Stella Polare, a feminine watch signed ANTOINE PREZIUSO GENÈVE. With its case cut from the heart of a meteorite, and its tourbillon and movement entirely decorated by hand, the Stella Polare transcends the traditional codes of luxury watchmaking.

Antoine Preziuso has let space forge the case of the Stella Polare – cut from a meteorite that fell to Earth north of the Arctic Circle over 100,000 years ago. This extraordinary context sees Antoine Preziuso give free rein to his talent as a watchmaker, with a movement and tourbillon decorated in minute detail. Hand-engraved stars on the bridges form a bas-relief set off against a background dotted with tiny craters, like the surface of a celestial sphere.

The symmetry between the openwork barrel at 12 o'clock, and the tourbillon – supported by a bridge of great finesse – at six o'clock, reinforces the watch's power and harmony. With 110-hour power-reserve and high-precision of his tourbillon, it does far more than keep time: it tells the time… and illustrates it.

Stella Polare (‘Pole Star’ in Italian) combined to give birth to a deliciously feminine watch, set off by a turquoise bracelet made from Nile Perch lined with lizard-skin. Although the Stella Polare scintillates like a watch set with jewels, this effect comes not from precious stones but from the patterns produced by the craftsman and the meteorite, a crystalline, interweaving named Widmanstätten patterns.

Meteorites, like the finest diamonds, have their own name and a history. The Muonionalusta is unique. Before it was discovered in northern Sweden in 1906, this 230kg block of virtually pure iron had lain in the frozen ground of Lapland for 100,000 years. It is probably the oldest object known on Earth – born on the outskirts of the universe 4.5 billion years ago, at around the same time as our Solar System. The Muonionalusta is one of the 5% of ferrous meteorites. Its composition – essentially iron, along with 8% nickel and traces of more exotic materials (gallium, germanium, and iridium) – reveals its origins in outer space.