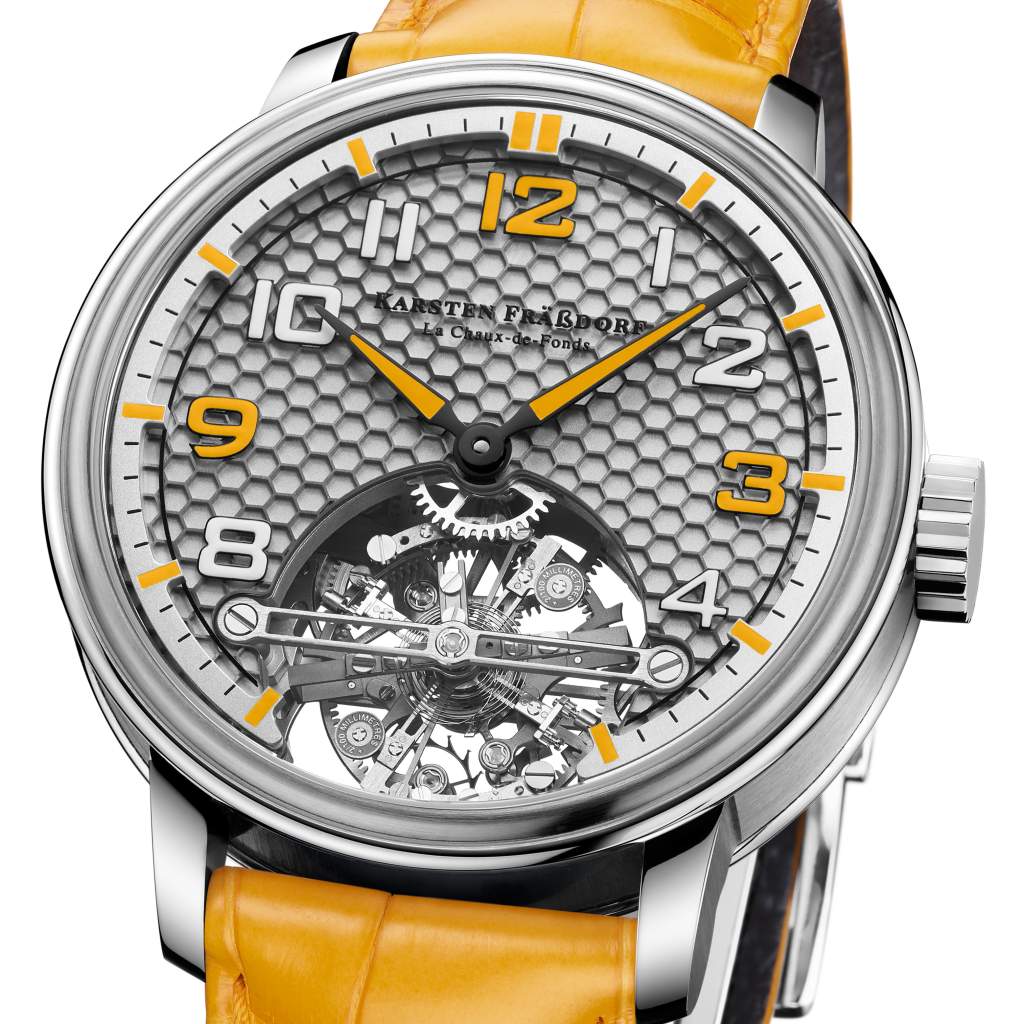 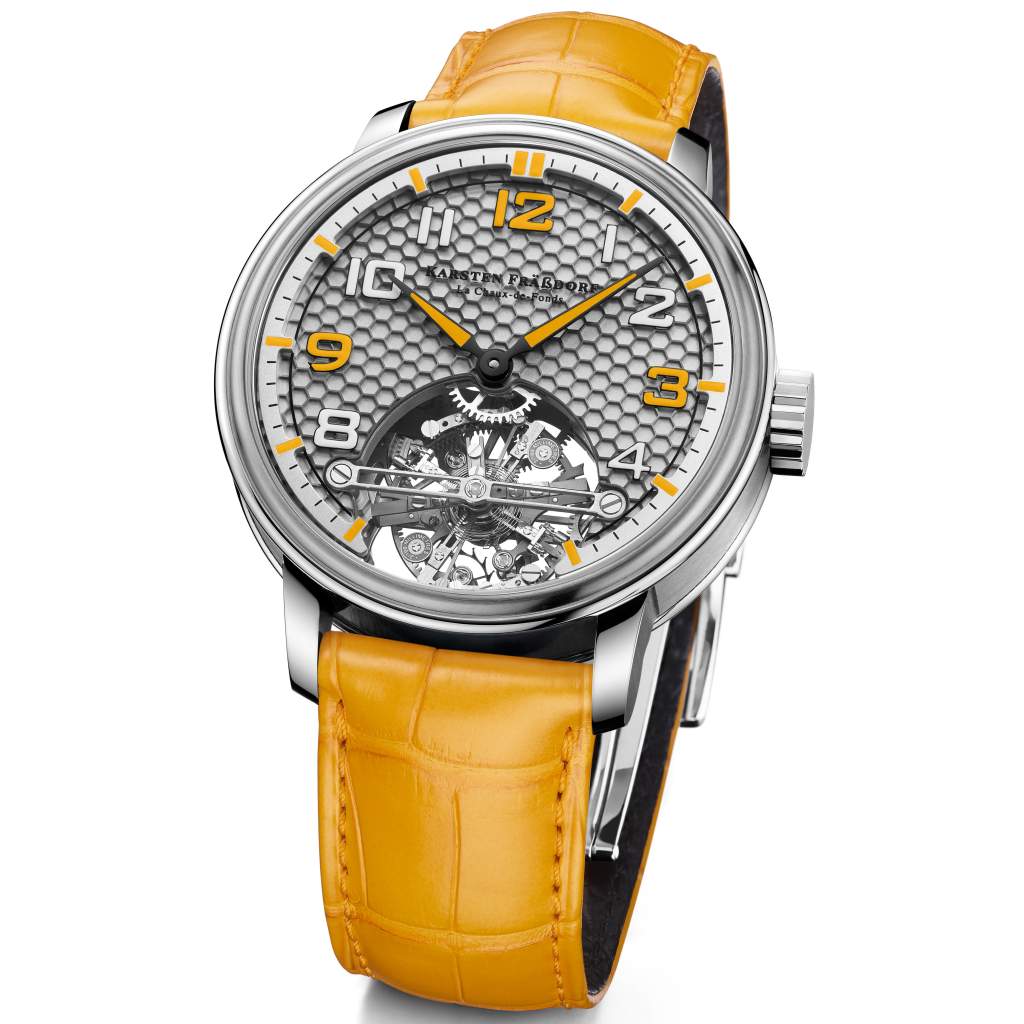 The KF brand is reinventing its iconic Spirograph model with new features that push the limits of personalisation and timing to even greater heights.

Faithful to the original model, the Spirograph Sport highlights the tourbillon’s function. Visible through a broad dial aperture at 6 o’clock, this one-minute tourbillon is equipped with an escapement designed and developed 100% by the KF brand, as is the rest of the movement that drives it. The result is an entirely Swiss Made watch produced in La Chaux-de-Fonds.

This calibre has been designed and built around its balance-wheel to meet the standards of pure chronometric performance: an extremely rare event in the industry. With that in mind, this chronometric heart comprises two new innovations and was shaped by the vision and expert hands of a watchmaker, precision timer and construction developer driven by passion and conviction.

A precision instrument intended for daily use, this manual-winding calibre beats at a rate of 18,000 vibrations per hour. While making it more difficult to adjust the regulating organ, this frequency enables better management of the energy required for the watch to operate properly. It also reduces component wear and tear, thereby enhancing sustainability of precision. Thus, through the choice of materials and the specific construction of the calibre, the Spirograph Sport will be a lifetime companion and survive through subsequent generations, providing it is regularly serviced.

Equipped with a new elastic suspension system, the movement – which appears to be “flying” inside its case – can absorb shocks of up to 5,000 Gs. It displays considerable endurance with a 70-hour power reserve, meaning that it operates during this time period without requiring any manual winding via the crown. However, in order to improve chronometric accuracy, autonomy is deliberately reduced to 44 hours by means of the “Maltese cross” stopwork mechanism, which guarantees a more stable driving force.

The 45 mm-diameter steel case frames a transparently understated dial adorned with a “honeycomb” motif. This decoration, a nod to the coat-of-arms of La Chaux-de-Fonds where the watch is produced, contrasts with the bright yellow of the hands and transfer-printed Arabic numerals at 3, 9 and 12 o’clock. The same pattern is picked up in the engravings on the baseplate visible on the movement side through the transparent sapphire crystal caseback.

As usual at KF, all the aesthetics of this complications – strap, case alloy, dial motif and movement decoration – may be entirely personalised. In an ultimate playful touch, the colour of the hands and Arabic numerals applied to the dial are also left up to choice. As one might expect from an exclusive model of this kind, the Spirograph Sport will be issued in a limited edition of just ten.

While the KF brand is synonymous with fine watchmaking, it devotes its keenest attention to chronometry – the term used to designate high-precision time measurement.

It all began a few years ago with the construction of the first rim-free balance-wheel featuring two round peripheral weights held by a dedicated arbor. While this resolutely innovative design is above all a nod to marine chronometers, which also worked with large balance-wheels, it is also a reference to chronometry and its origins.

Based on this new balance-wheel, two new innovations enrich this ongoing quest for precision. The first concerns a recurrent problem in watchmaking: thermal coefficient, or the expansion of certain components during temperature changes. This is a major challenge, especially when it impacts the components that form the heart of the watch, in this case the regulating organ. A temperature increase of a few degrees influences the balance-wheel, which expands outwards, sometimes causing a loss of several seconds. This phenomenon is partially compensated by the balance-spring which tends to generate a time gain. For decades, traditional watchmaking has therefore used what are known as “self-compensating” balance-wheels, thereby substantially mitigating expansion-related phenomena. This new construction makes it possible to take a step forward by creating a balance-wheel capable of providing compensation described as “auxiliary”, in order to further reduce the impact linked to the thermal coefficient not resolved by a traditional self-compensating balance-wheel.

This new balance-wheel, made of non-magnetic steel, can withstand an inertia of 85 gr/mm2 and has a hardness of up to 600 Vickers. It is therefore more resistant to shocks.

In practice, the balance-wheel plate forms one arbor crossing through the centre of the balance-wheel, thus enabling an extension of the material in the event of a temperature increase. This extension is contained by a second arbor (the bar), which remains invariable. Therefore, when the material expands, the force is redirected to the affix arms. Each arm is solidly attached to the invariable arbor by a screw-fitted pivot point enabling the balance-wheel to move inwards. The affix arms can then accommodate, at different places, a certain number of screws (of different sizes and materials) making it possible to influence the effective mass, thus offering the watchmaker the possibility of working on the variations of inertia related to the thermal coefficient. This is the so-called “auxiliary compensation” principle. Located opposite the affix arms, two auxiliary classification weights serve to adjust the variable weight of the balance-wheel. Their purpose is to compensate for the weight of the screws placed on the two affix arms so that the balance-wheel is neither too heavy nor too light. Moreover, given that every detail counts, their surfaces can be personalised (notably by engraving or gemsetting). Finally, a third arbor, perpendicular to the first, is fitted on either end with two screws, enabling fine adjustments on the one hand, as well as classification of the balance-wheel at 18,000 vibrations per hour.

In conclusion, the innovation of this mechanism lies in its ability to exercise a real influence on the thermal coefficient that is normally set once the balance-wheel has been paired with its hairspring. But in this waltz performed by these two components, the balance-spring always has the upper hand, given that it is manually-crafted and endowed with its own nature that is by definition unique for each watch. Tolerating no alterations or transformations, the balance-wheel is thus charged with handling the vagaries of time, naturally including changes in temperature. Nevertheless, the balance-spring must also resist the ever-increasing magnetic fields in our daily lives, which is why it is made of a “Straumann” alloy capable of withstanding magnetic fields up to 1,000 Gauss. In terms of its operation, the balance-spring – which should ideally “breathe” concentrically to avoid any unbalance (phenomenon of loss or gain of the watch in vertical positions) – is equipped with an external “Phillips” curve and an internal “Grossman” curve.

This new balance-and-spring assembly is undoubtedly the Stradivarius of chronometry, as it enables fine and sophisticated adjustment of the regulating organ. Therein lies the beauty of this process, in which the expert hand of the watchmaker timer shapes the heart of the watch by reading and interpreting the most sensitive components of its “engine”.

But what would such a splendid and beautiful sight be without providing an opportunity to observe it? The balance-stop function is therefore the second new feature here, a mechanism enabling the wearer of the watch to stop the tourbillon carriage and its balance-wheel at any time in order to contemplate its magical inner workings.

KF surprises the world of Swiss Haute Horlogerie by becoming a Maison capable of tailoring its creations to reflect its clients’ imagination. More than a philosophy, KF is the designer of your dreams through bespoke customisation.

It took a man, Karsten Frässdorf, a master watchmaker crazy and bold enough to view contemporary watchmaking from a new angle. In 2016, this breath of fresh air in the industry led to the creation of the brand bearing his initials (KF), driven by a vision running firmly against the tide and taking the customer as the starting point for all its watch designs.

The KF philosophy is above all based on authentic expertise that dares to be modern while celebrating the past. This is a case of pushing the “Swiss Made” label to its limits for watches that are 100% developed, produced and assembled in La Chaux-de-Fonds, Switzerland.

A singular brand, capable of developing of any calibre, KF ensures freedom and absolute creativity in terms of innovation. It is also a playful Maison, however, which ushers its clients into the fabulous world of timepiece design by giving them carte blanche to choose the design and complications of each model. A resolutely horological, unmistakably timeless approach proclaiming each owner’s vibrant personality.

KF believes in sharing a mutual madness, mid-way between high-flying technicality and waking dreams, in order to shape the watchmaking landscape that it regards as the sum of individualities. This concept is expressed in a highly exclusive way, since each model is by definition unique in terms of both its design and its production methods. It is this “Atelier” spirit one discovers when visiting the brand located in La Chaux-de-Fonds, the cradle of watchmaking and a city featured on the UNESCO World Heritage List for its watchmaking town planning.

It’s about a life movement but above all it’s about a man: Karsten Fräßdorf.

Watchmaking has been part of his life for almost four decades. It all started at the age of 15 with a Junghans alarm clock that made a pretty loud ticking sound. This unmistakably horological melody has remained with him ever since, as has his alarm clock. Passionate about the grand and beautiful show staged by mechanical horology, he became a Master watchmaker, timer and developer. Karsten can create, develop and adjust any timepiece. Progressively learning and honing his trade as an apprentice watchmaker, journeyman and Master watchmaker, he began his career in clockmaking before serving as an expert and later a workshop foreman for an auction house. At Gübelin, he discovered the world of Grand Complications, a passion that has remained undimmed to this day. He successively opened a restoration workshop and then a movement development office before launching his namesake brand in the Swiss Jura, in 2016.