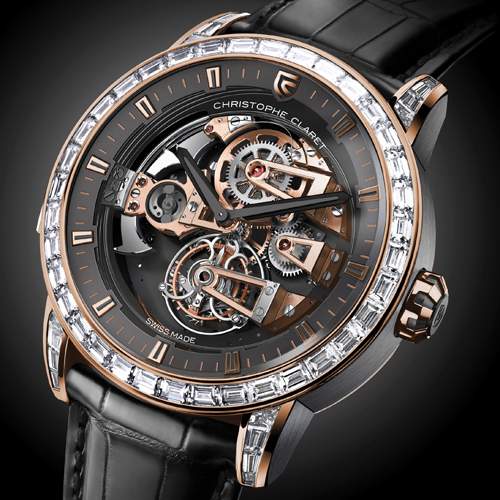 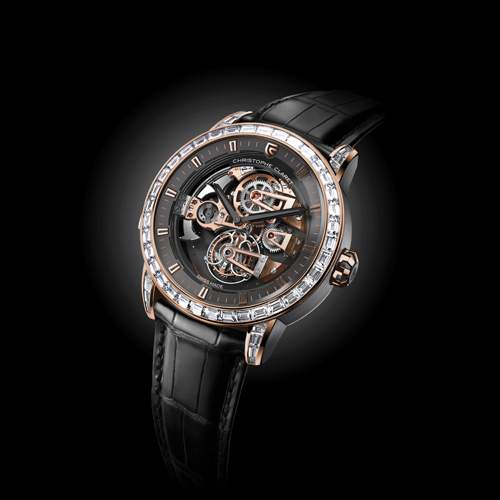 The Soprano features a musically accurate 4-note minute repeater striking Westminster Quarters on patented cathedral gongs, a 60-second tourbillon and Charles X style bridges, all on a spectacular dial-free view. The Soprano pays homage to the roots of Christophe Claret’s manufacture, which has innovated in striking complications, tourbillons and sapphire components since its earliest years. Indeed, in 1997 Christophe Claret was the first to incorporate sapphire components – comprising plates and Charles X style bridges − in a wristwatch movement.

The minute repeater is considered – with good reason − to be one of the most demanding and difficult horological complications to realize due to the marriage of technical complexity with artistic musical tonality. A minute repeater tells the time audibly with two notes created from two small hammers striking two gongs: one for the hours, one for the minutes and a combination of the two for the quarter hours. Even more complex is the Clarion repeater with three notes that can play a simple melody for the quarters.

However, the nec plus ultra of the minute repeater realm is the Westminster – so called for the distinctive tune played by the Big Ben clock at the Palace of Westminster, home of the British Parliament. Big Ben strikes a complex melody for the quarters with four hammers striking four notes on four bells. To provide an even fuller and richer sound than standard repeaters, the Christophe Claret Soprano features four cathedral gongs, each circling the perimeter of the movement twice (a normal gong goes around only once). And to further ensure that the rich sound reaches the listen’s ears, the central case band is in grade 5 titanium, a metal known for its superior acoustic properties and used in musical instruments.

A few decades before Big Ben began chiming Westminster Quarters over London, the French king Charles X was making a significant impact on art, architecture and horology. One of the defining characteristics of pocket watches created during this period were stepped bridges, which became known as Charles X bridges. Having spent much of his early watchmaking career restoring beautiful timepieces from this epoch, Christophe Claret incorporated this historic design element into the Soprano.

In 1997, Christophe Claret was the very first to use sapphire bridges (even then Charles X style) and plates in wristwatch movements, and the Soprano makes liberal use of sapphire components to allow visual access into the mechanisms. From the smoked ring circumscribing the movement that discreetly hides yet subtly reveals the cathedral gongs, to the transparent mainspring barrel at the top of the open dial, and turning over to the clear repeater inertia governor cover visible through the sapphire display back.


“When I created Manufacture Claret over 20 years ago, the very first movement I developed was a minute repeater so the complication has always been very special to me.” Christophe Claret

Minute Repeater: The minute repeater, which strikes the time on demand (usually by activating a slide on the caseband), is an extremely difficult complication to realize because:
1. Technically, it is a very complex mechanism.
2. Musically, the notes have to ring clear, loud and harmoniously.

With decades of experience developing striking watches, Christophe Claret has not just mastered the mysterious art of minute repeaters, but has brought the genre into the 21st century. Working with a piano tuner, Claret developed a computer program called Analyser 2000 that records and analyses the notes for pitch, duration and loudness, and even the length of the silent pauses between notes. This enables the Christophe Claret manufacture to consistently create harmonious and musically accurate melodies with strong crystalline notes.

Each note is determined by the precise length and diameter of the gongs. The hammer has to strike forcefully for a loud sound, but immediately leave the gong so as not to deaden the ring.

“The melody chimed by the Soprano is as musically correct as possible." Christophe Claret

Patented cathedral gongs: Each cathedral gong circles the movement twice so that one coil lies just above the other. Because the coils are so close together, they can touch each other as they vibrate, which can create a disconcerting buzz. Christophe Claret invented a system that effectively avoids this problem, which was awarded a patent.

However, in 1859 the melody was chosen for the clock tower at the Palace of Westminster in London. A clock now more commonly known now as Big Ben, though the term originally referred to just the large hour bell. So well known did the four-note chimes become that they came to be called Westminster Chimes.

The melody is played when the watch strikes the quarter hours (each 15 minutes) as just a single deep note is played for the hours and another single (higher pitched note for the minutes.

While the Westminster Quarters melody is usually played in the key of E major, the Christophe Claret Soprano chimes in the key of C major to provide longer resonating and happier-sounding notes.

Manufacture Claret is one of a very elite few manufactures with the skills, knowledge and capability to create four-note Westminster minute repeaters.

Transmission of Sound: The purpose of a minute repeater is to allow the time to be heard rather than read, which was a very useful feature before the invention of electric lamps (and mobile phones). To maximize the sound of the notes Christophe Claret has incorporated three features into the Soprano: Cathedral gongs, an open dial and a titanium caseband.

"One of the keys of developing an excellent minute repeater is ensuring that the sound can escape easily." Christophe Claret

Cathedral gongs: Standard repeater gongs (the bell) are usually made from a hardened steel wire that makes a one complete circle around the movement or dial. The Soprano is equipped with four cathedral gongs, each circling the movement twice to provide a fuller and richer sound.

No dial: To minimize barriers to sound − and to maximize visual appreciation of the finely finished movement and the operation of the striking mechanism − the Soprano has no dial which allows the beautiful melody out and showcases the tourbillon, repeater operation, mainspring barrel, winding mechanism and Charles X bridges.

Titanium caseband: The case of the Soprano is in three parts: upper and lower (bezel and caseback) sections in gold and a central titanium caseband. Titanium was selected for its superior sound transmission qualities. Where gold tends to deaden sound, titanium effectively transmits sound from the interior of the case to the exterior. The sound qualities of titanium are so good that the metal is often used for saddle bridges in high-quality guitars.

Tourbillon escapement: Christophe Claret has an affinity for the tourbillon escapement, for both its kinetic beauty and its superior chronometric performance. In fact, Claret is so dedicated to the tourbillon that it is the standard escapement for all of his manufacture movements. The 60-second tourbillon carriage of the Soprano is on full view through the open dial at 6 o’clock and is supported by a single arm stepped bridge in the characteristic style of Charles X.

Abraham-Louis Breguet invented the tourbillon escapement at the end of the 18th century, so it is only fitting that Claret has complemented the Soprano’s tourbillon with a ‘parachute’ shock protection system – another Breguet invention.

Charles X: In 1824, Charles Philippe the Count of Artois succeeded his brother Louis XVIII to the throne of France and became King Charles X. While his rule lasted just six years – ending with the July Revolution of 1830 – Charles was a great patron of the arts and his influence was seen throughout France in architecture, art and horology. The watchmaking of this period was prolific, generally of very high quality and distinguished by a particular form of stepped bridge.

Sapphire components: Christophe Claret is a pioneer in making movement components from sapphire crystal and in 1997 was the first to develop a movement with sapphire plates and bridges (and even then his first sapphire bridges were in the Charles X style he admired form his has in restoration of historic timepieces). Since then, Manufacture Claret has been at the forefront in the use sapphire components that allow maximum appreciation of movement and mechanisms.

There is the obvious scratch resistant top crystal and display back as well as the more discreet smoked sapphire hour and minute ring around the open movement. But sapphire is also used to allow the viewer to delve even deeper. A transparent mainspring barrel under 12 o’clock allows both the barrel to be seen turning while being wound and the approximate power reserve to be deduced by the state-of-wind of the visible mainspring. The repeater’s inertia governor at 3 o’clock has a clear sapphire cover so it can be seen silently spinning as it regulates the speed of the chiming gongs.