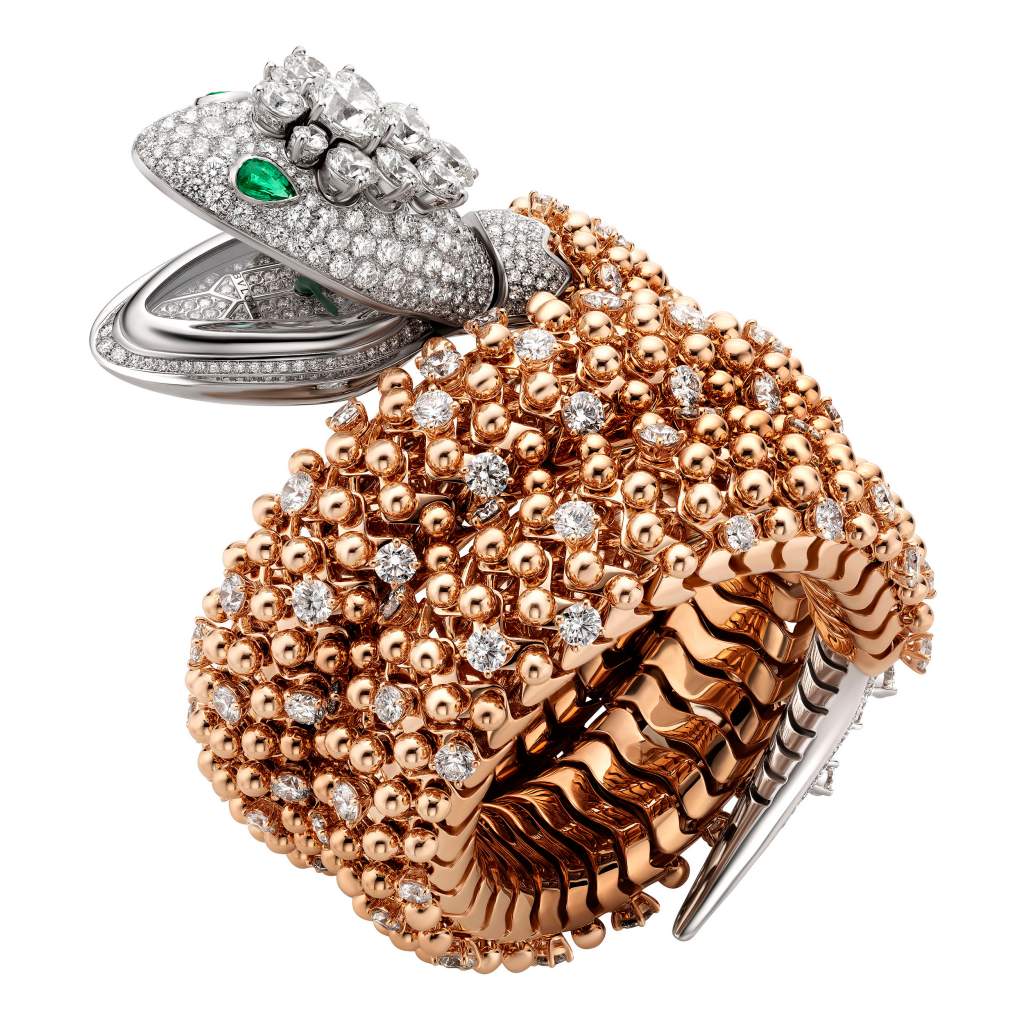 In a tribute to its animal spirit and to its Heritage collection, Bvlgari captures the power of seduction in the new Serpenti Pallini High Jewellery secret watch, camouflaging sensuality and temptation with a hypnotic design. Sophisticated and glamorous, this jewellery watch coils around the wrist with the precious beauty of the beaded gold scales, perfectly reproducing the distinctive sinuosity of the snake.

The body is formed by numerous especially elaborate elements: over 250 tiny moving spheres crafted and assembled by hand are unexpectedly move and play with every wrist movement, while a gold spring running through the core ensures perfect flexibility.

Closely entwined with the history of humanity, the serpent is a powerful symbol dating back to ancient Greco-Roman mythology. Representing wisdom and seduction, the snake has transcended 2,700 years of Roman history to become a beautiful motif of eternal renewal. Civilization has been intertwined with the emblem from the times of ancient sovereigns – none more associated with the serpent than Cleopatra, Queen of the Nile. As she arrived in Rome to a cheering crowd in 46 BC, the reputed beauty’s jewellery paid honour to this reptile through her royal “cobra” diadem.  In the 1963 epic film Cleopatra that depicted the story of the brilliant ruler, lead actress Elizabeth Taylor wore Bvlgari serpent jewellery and watches on and off camera and Serpenti was to become one of the actress’s favourite Bvlgari collections. The legendary snake, the inseparable accessory of Aphrodite, Greek goddess of love, and Plato’s circular symbol of ever-lasting life, continues to remain supreme, embodied through yearly reinterpretations of the Serpenti collection.

The serpenti form bracelet-watches by Bvlgari, characterized by a dial set into a head studded with gems and gold coils that wrap around the wrist, have become a landmark in the history of jewellery, which in turn intersects with that of the brand itself. The origins of the early Bvlgari snake-shaped watches closely linked to the use of Bvlgari’s Tubogas technique. The first examples date back to the late 1940s and were in the shape of a highly stylised serpent with coils made either in the typical Tubogas design or in gold mesh that wrapped around the wrist. The watch-case and dial, usually square or rectangular, were placed at one end to evoke the serpent’s head. The 1960s saw the first models where the serpent was rendered in a more realistic manner, asserting the connection to ancient tradition more explicitly. In Bvlgari’s serpent watches from this period, the watchcase was concealed in the snake’s head and the dial lay under a hinged cover on the upper and central part of the head. The scales composing the body were individually handcrafted from sheet gold and either attached to each other by soldered gold pivots or screwed together in the enamelled versions.

Paying homage to these historical pieces, the Serpenti High Jewellery watch’s pixelated design and avant-garde artisanal technique are inspired by a stunning 5-row Serpenti secret watch in yellow gold and diamonds from 1955, currently belonging to the Bvlgari Heritage collection. The beautiful, bold design recalls the skin of an exotic snake, striking with potent force in a new contemporary interpretation for women looking for absolute chic.