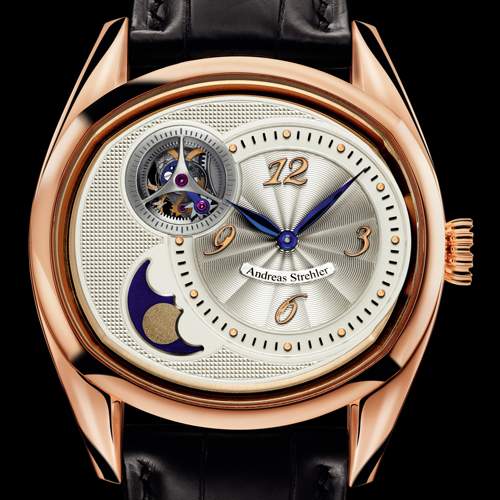 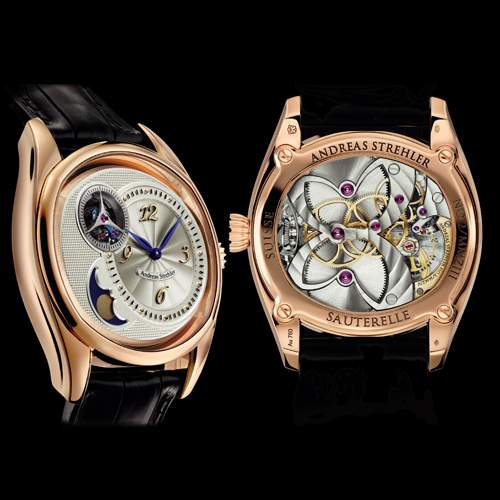 With only four components, Andreas Strehler achieves almost eternity. Only almost, because the Lune perpétuelle's phase of the moon mechanism does require an occasional adjustment. To be quite precise, it requires an adjustment by ten minutes every 14'000 years or by one day every two million years. This adjustment is made through the crown and also works backwards.

For the first time in a wristwatch, Andreas Strehler, offers a mechanical solution which eliminates nearly all technical and mechanical influences hampering the escapement. The constant and linear supply of energy to the balance is the ideal in watchmaking. It is the basis for precision. For the Sauterelle, Andreas Strehler has gone his very own way in realising this regulated supply of energy to achieve the most technically stable solution.

Conventionally, the complication known in watchmaking as force constante is mounted on the escapement wheel. However, this is the point in the whole movement, where the least torque is present.

By contrast, in the Sauterelle the remontoir d'égalité is placed on the seconds wheel. The remontoir d'égalité therefore leaves the Swiss anchor escapement unimpeded; an escapement perfected over a period of more than 200 years. The solution used in the Sauterelle has the advantage that the complete escapement including the escapement wheel moves freely between two impulses, uninfluenced by the movement and the gear train.
Every second, the visible satellite gear supplies the escapement wheel with exactly the same amount of energy. At the same time, the deadbeat or jumping seconds are indicated. The energy is accumulated every second by a star shaped satellite through the winding of a hairspring. The mechanism is then released, the balance gets energy and the satellite wheel again rests against the stopping jewel (cf. attached diagram).

The aim of the Andreas Strehler remontoir d'égalité was to concentrate on the elimination of outside factors: Fluctuations in the supply of energy, flaws in the gear train (uneven discharge of the spring, uneven running of the gear train or the wheels actuating the hands) and variations in temperature (viscosity of lubricants) are eliminated by the remontoir d'égalité.

Different from a force constante with a fixed division ratio, the remontoir d'égalité can be used independently of the movement's frequency. For this reason, the Sauterelle's movement has a frequency of 21'600 A/h – instead of 18’000 A/h – resulting in higher precision.

The star wheel now starts to turn anticlockwise, powered by the satellite arm. The star wheel has a pinion on its lower end which follows the internal gear of the intermediary winding mechanism. By turning, it also moves forward, in the direction of the stopping lever.

This movement of the stopping lever has re-tensioned the hairspring and resupplied the seconds wheel with energy.

The energy supplied to the seconds wheel thus only depends on the hairspring in the intermediary winding mechanism. This is being re-tensioned every second by the satellite arm. It is therefore for all practical purposes independent from the power delivered by the barrel via the gear train and the seconds pinion to the satellite arm. In this way, the escapement wheel receives a linear supply of energy.

In addition, only that part of the two mainsprings is being used which gives off a linear force. Once the mainsprings go beyond this ideal range, the movement is being stopped immediately (arretage on the barrel). This, together with the Remontoir d’égalité, leads to an absolutely constant amplitude of the balance for 78 hours.

Eternal phase of the moon

Further, Andreas Strehler cleverly combines inner and outer toothing as well as the use of prime numbers for the number of teeth to mechanically achieve complex fractions with an integral number of teeth. This leads to the high precision of the phase of the moon mechanism.

On the one hand, the calibre Sauterelle à Lune pérpéuelle in all consequence follows the classical principles for the construction of watches and the traditions of finishing movements. On the other hand, the design and the execution of the movement are innovative. From the best technical solution grow the delicate and almost organic bridges and the look of the movement. The form of all of the components both follows from the solution to a technical problem and the necessities of elegance.

To apply classical construction principals means that a movement by Andreas Strehler could have been built a hundred years ago, albeit using different technologies. Exotic materials are missing completely from his movements. In all probability, his watches can also be repaired in a hundred years' time by a skilled watchmaker.

Andreas Strehler may adhere to traditional construction principles, but he applies them using his particular method. This begins with the composition of the movement with its central main plate. This allows the free use of both sides of the movement.

Many of his technical solutions are aimed at the movement's longevity. The winding mechanism employs true conical gear wheels, the specially designed profile of whose teeth guarantees their non-wearing functioning, reducing abrasion to almost nil. Also the regular cog wheels are designed with defined contact surfaces of their teeth to optimise the line of contact, this also in order to reduce wear and save energy. For the same reason, the two barrels a positioned in such a way, as to practically eliminate pressure on the bearings of the minute wheel.

Andreas Strehler's way of constructing and designing movements is further expressed in his formal vocabulary which is much more than merely a decorative element. The characteristic organic look of the movements, relating in their elegance to Art Nouveau, has valid reasons: The most technically sound solution is more often than not to choose the direct way with the least loss of energy from the barrel to the balance.

The synthesis of tradition and modernity is also evidenced by the finishing of the individual components: The hand-bevelling and polishing may be very traditional, yet it reaches acute angles no other watchmaker dares to touch.