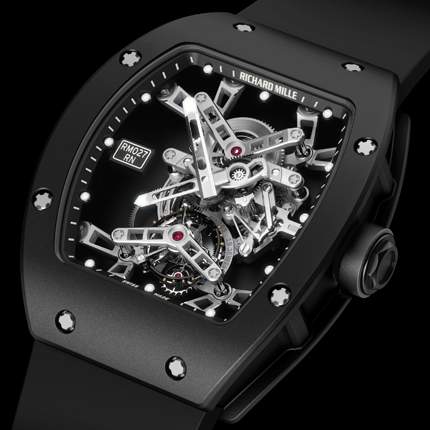 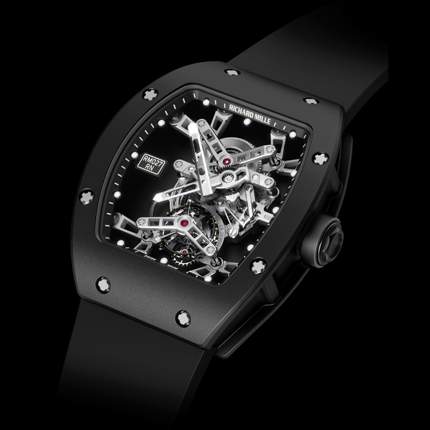 FOR THE FIRST TIME IN THE HISTORY OF TENNIS, A FINAL IS WON BY A WATCH.

Sunday the 6th of June 2010, the king Rafael Nadal was back on his throne in Roland Garros thanks to winning his fifth French Open title against the Swede Robin Soderling. At the end of the fortnight, having won seven matches, the Spanish player did not concede a single set against his opponents. An unquestionable victory which confirms the achievement of another substantial challenge: the success of the RM 027 tourbillon, a watch designed by Richard Mille for Rafael Nadal, worn by the Majorcan during his matches on Roland Garros' clay courts, a world premiere which never failed.

After this ultimate test, the RM 027 is ready to escort the world number 1 in all of his biggest international tournaments. This is a great reward for the watchmakers of Richard Mille, who, once again, pushed away the limits of innovation and who multiplied tests so that the watch and its manual winding tourbillon movement could resist without failing against Rafael Nadal's tough playing style. Richard Mille created for him the lightest mechanical watch in the world: hardly 18 grams, strap included.

To achieve this feat, the movement is made of Lital® alloy, a high lithium content alloy coming from the aerospace industry, while the case is made of a carbon-based extremely resistant composite, combining ultra lightness and extreme rigidity. As for each watch in the collection, the development of the RM 027 was made with a total absence of compromise: time devoted to research and experiments, illogical waste rates… At no time did the colossal development costs hamper the elaboration of this extremely technical model since, according to Richard Mille, perfection has no price and only the result matters. Winning Roland Garros in 2010 was Rafael Nadal's target, creating a watch which could accompany him into this victory was Richard Mille's. A foolish bet, the RM 027 is new proof of Richard Mille's power of innovation.