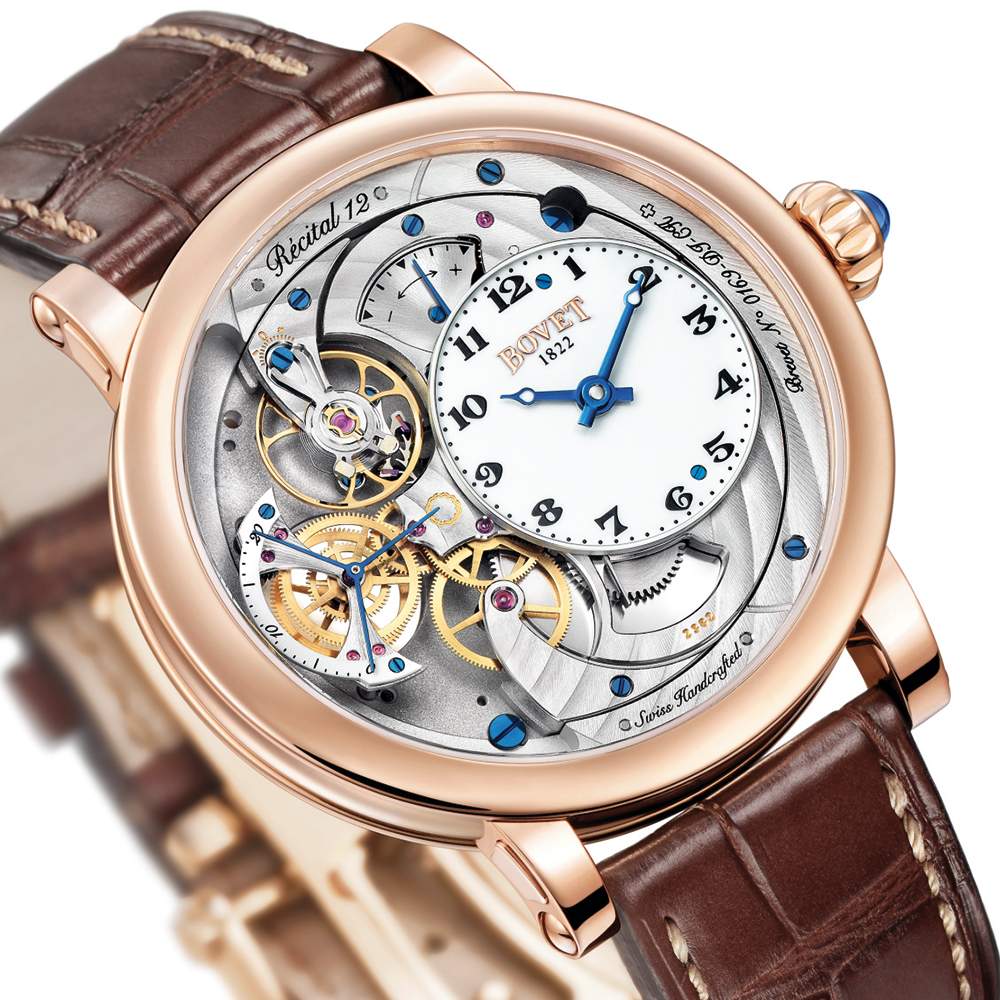 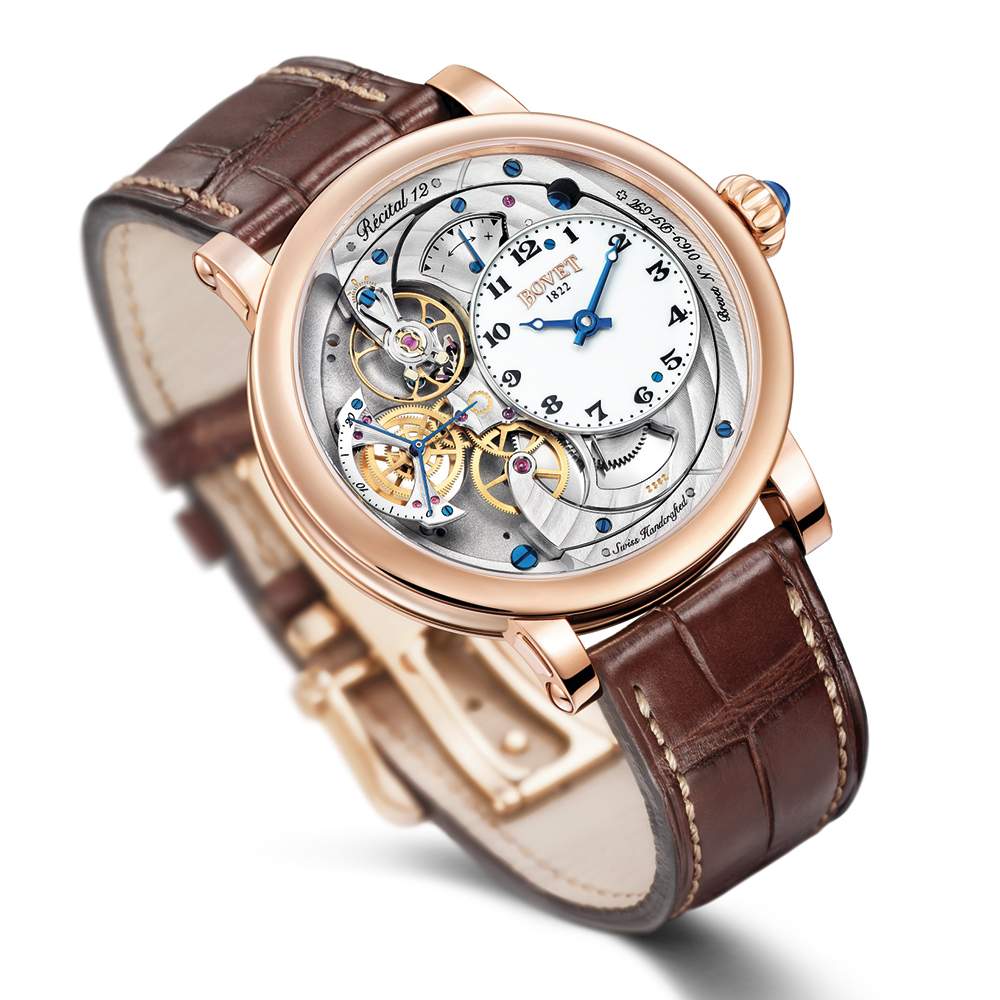 The history of the House of BOVET is a veritable roll-call of great events. Among the most recent, the appearance in 2010 of the Amadeo® convertible case has hugely impressed collectors, since it was introduced across the entire Fleurier collection. This year the spotlight moves to the DIMIER collection and the Récital 12, “Monsieur DIMIER”, a new timepiece destined to leave its mark not only on the history of the House of BOVET, but on the world of Haute Horlogerie generally.

This timepiece is powered by the first movement developed and manufactured entirely by watchmakers of the DIMIER Manufacture and to be regulated by a non-tourbillon movement. Five years of development has been needed to develop this movement, Pascal Raffy has kept his promise when he announced the project back in 2008! Specifically conceived and designed for the special features of different BOVET 1822 collections, this calibre has the ability to evolve and adapt to the type of indications it will be required to display.

For its first appearance, Pascal Raffy and his team chose to present it in all its splendour. Through the use of a reverse hand-fitting, the movement reveals its gear-train, the oscillations of its balance, and a transparent coaxial choreography supporting the triple seconds-hand characteristic of the collection.

A series of elegant curves, the contours of the bridges form symmetrical shapes against which the time is displayed in the off-centre dial at 3 o’clock. The surfaces of the bridge present circular Côtes de Genève decorations centred on the axis of the seconds-hand. It is with a rare elegance that the concentric shapes of the movement and its decoration lead the eye directly to the essential information provided by this calibre.

Positioned symmetrically, two openings have been cut out in the surface of the barrel’s and power reserve’s bridge. The first houses a power-reserve indicator, a judicious feature given that this is a manually-wound movement. The second reveals a segment of the single barrel, which allows it to guarantee a seven day power reserve.

The effective power-reserve is in fact largely in excess of 7 days, however the final hours dispensed by the mainspring are always prone to amplitude, as a result of which timekeeping deteriorates. Because the artisans of the Manufacture DIMIER 1738 allow no compromise, Pascal Raffy wished logically to indicate the remaining power-reserve during which the timepiece will tell the time with an accuracy worthy of its haute horlogerie credentials.

In terms of chronometry, the design office of the Manufacture opted for a traditional escapement, which became the focus of original studies and calculations. Accustomed to the constraints imposed by the manufacture of tourbillons, they developed and produced a sprung-balance assembly offering an impeccable level of performance. Careful attention was paid to the power-reserve and to the instantaneous and long-term chronometry equation, guaranteeing qualities that collectors will fully appreciate.

While this calibre merits every attention, the Récital 12, “Monsieur DIMIER”, would not be a BOVET timepiece had it not been developed as an entity rather than an assemblage of components. Dial-makers, case-makers and watchmakers worked together as usual to develop this timepiece. To celebrate the launch of this new calibre, the Récital 12, “Monsieur DIMIER” needed to be a timepiece with classic, timeless qualities. The main considerations for a piece of this nature are its volumes and balanced proportions. The ideal thickness of the movement (3.9mm) ensures the necessary rigidity for perfect timekeeping and allows it to be housed in a 42mm diameter case with an overall thickness of 9.1mm, ideally suited for the purpose.

Optimising its volumetric properties, dial-makers succeeded in creating a link between the visible functions of the movement and the classicism of the timepiece. The many constraints facing them were overcome with a virtuosity that has entered the soul of the timepiece itself. To compensate for their small size, the off-centre hours and minutes dial and the 120° segment of the seconds indicator were in need of improved legibility. It was decided to use black or white lacquered dials. Only artisanal lacquer work and unrivalled experience and know-how lend credence to the claim of luxury. Luxury which today is rare, since such a level of perfection requires above all much time and many operations before final polishing can reveal the true depth of finish.

Impregnated with two centuries of watchmaking tradition, the Récital 12, “Monsieur DIMIER” is brimming with innovations that keep this heritage alive.

Presented at the Salon BOVET 2014, the Récital 12 will be available in 18-carat red or white gold.