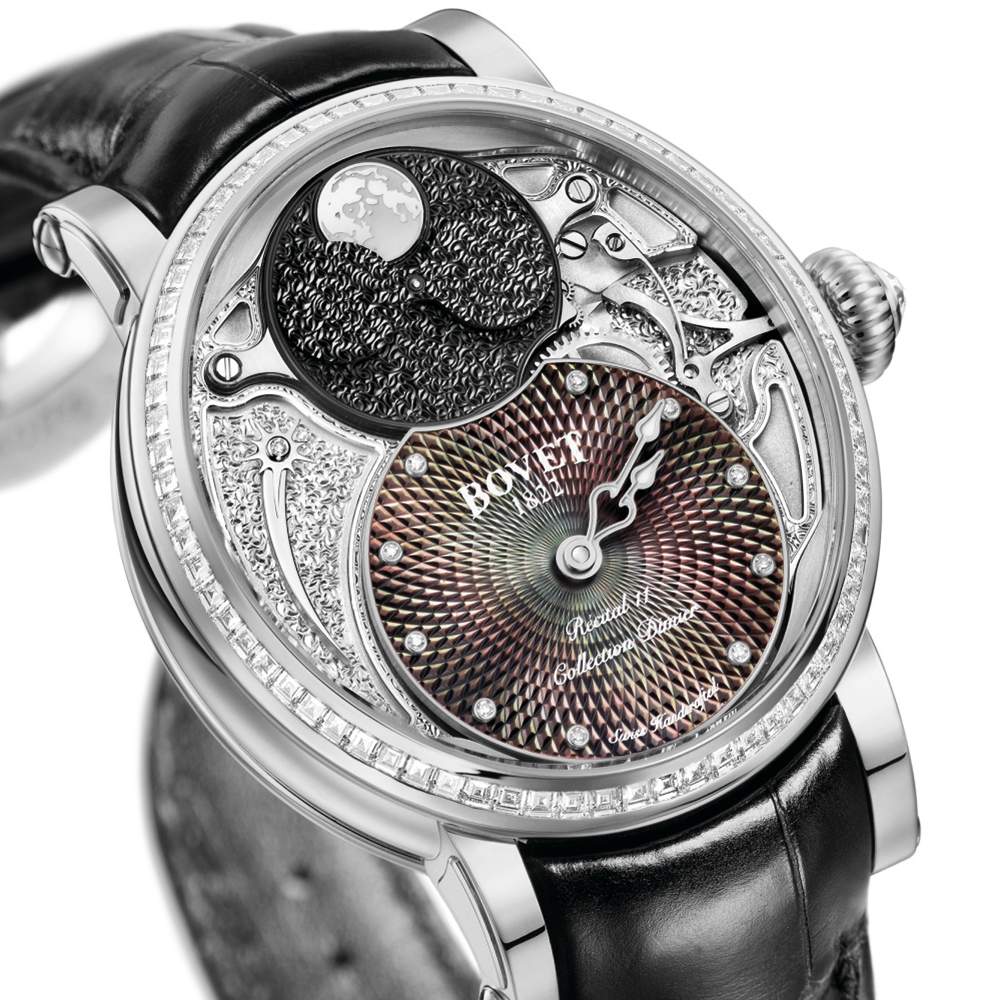 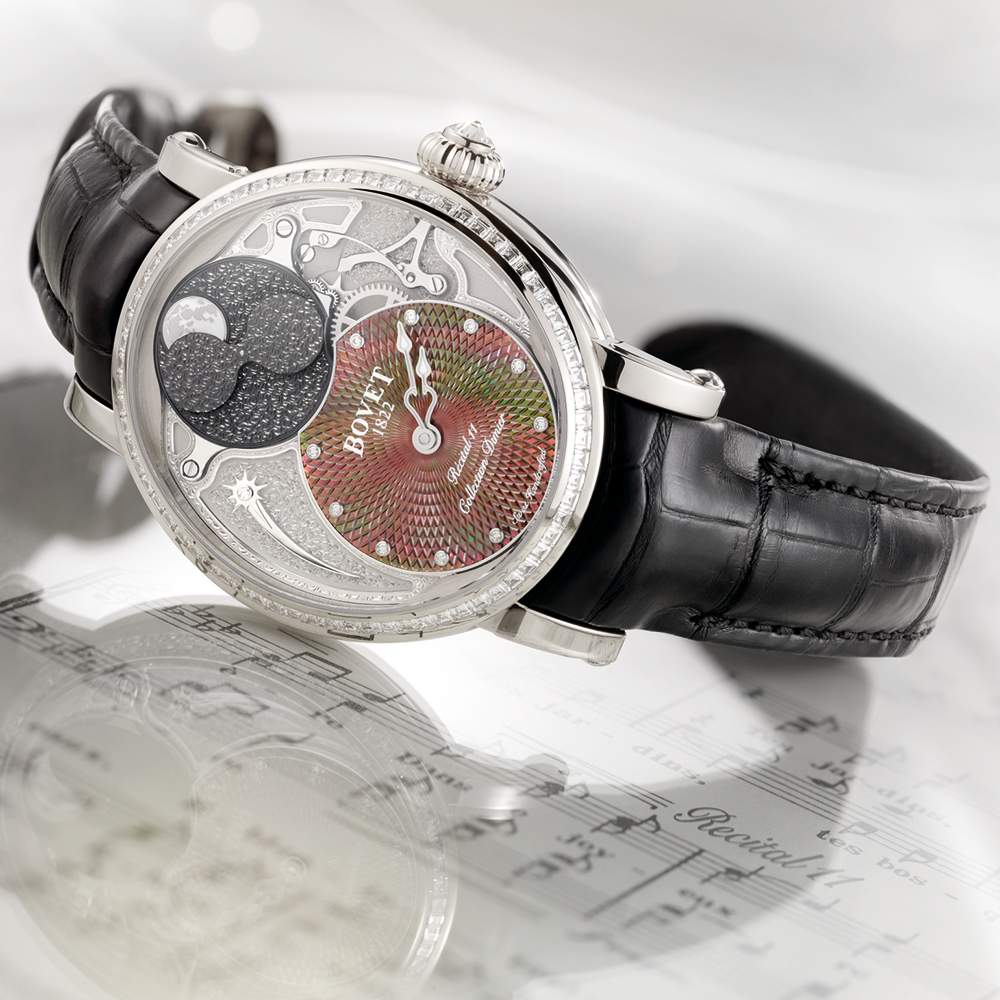 In January 2013, BOVET 1822 lifted the veil on the first timepiece in its history not to have a round case. A vertical ellipse, the Récital 9 “Miss Alexandra” Tourbillon caused a sensation among experts and collectors of fine watchmaking. This timepiece owes its huge success to the perfect execution of even the smallest details, but also to the design of its case and its ideally balanced proportions. The unbound enthusiasm generated up by this timepiece since its launch led Pascal Raffy and his teams to develop a new interpretation featuring the emblematic oval case.

Making the affiliation between the two timepieces even more evident, the Récital 11 “Miss Alexandra” features the same precision phase of the moon and characteristic hands of the Récital 9 Tourbillon. The hour and minute hands are offset at 6 o’clock. Their atypical silhouettes, forming a heart every hour, stand out clearly against the guilloché surface of the finely-worked mother-of-pearl dial crafted by artisans of the Dimier 1738 Dial Manufacture.

With its assurance of proven reliability and chronometric precision, the self-winding movement of this new timepiece guarantees a power-reserve of 72 hours, or three days. A comfortable margin, since it allows the timepiece to be taken off for an entire weekend and put back on without the need for any adjustments.

The precision moon phase module was entirely developed and manufactured by artisans of DIMIER 1738. More complex than a traditional indicator, this precision complication requires only a single one-day correction every 122 years. Its display method was also revised. Rather than showing two moons on a moving disc, here the moon is rigidly attached to the dial. The system features a disc engraved according to an exact cartography of the lunar surface. Hollow parts have been filled with luminous material. As a result, the moon appears exactly as it can be observed in the sky and therefore seems to directly reflect the sun’s light. The sky through which the earth’s satellite moves has been chased and black treated. The Manufacture’s engravers then reworked this sky so that bright points appeared, reminiscent of stars. Two circular pallets moving above this assembly are decorated with the same motif as the sky. Reading the phase of the moon is therefore both intuitive and realistic.

An eye for detail is ever-present during the development of a new BOVET timepiece. As a result, the customary corrector for adjusting the phase of the moon does not appear on the case-band. The latter retains an elegant purity, problems of water-resistance are avoided and, lastly, rapid correction of the phase of the moon requires the use of no tools whatsoever. To achieve this feat which women are sure to appreciate, the corrector has been placed concentric to the winding and timesetting crown. Adjustment of the function is carried out simply by pressing the centre of the crown, which is decorated with the traditional sapphire cabochon.

With the DIMIER collection, collectors have grown accustomed to timepieces that reveal much of the ingenuity and beautiful decoration of their exquisite moving parts. The eight formed by the moon-phase indicator and the matching mother-of-pearl dial allows a full appreciation of the sumptuous chasing of the movement, which extends the celestial vault across its entire surface. Distinctly visible are the hand-chamfered and polished steel levers and jumper-spring of the moon-phase corrector, which with each press of the crown perform a veritable ballet, orchestrated with a precision characteristic of the artisans of DIMIER 1738 Manufacture.

As a BOVET timepiece would be unthinkable without the possibilities of personalisation offered by the virtuosity of artisans of the House, the Récital 11 is available in 18-carat red or white gold and can be set with round or baguette-cut diamonds. The case may also be hand-chiseled to match the decoration of the movement. The very wide range of combinations available is sure to meet the tastes of even the most demanding connoisseurs.