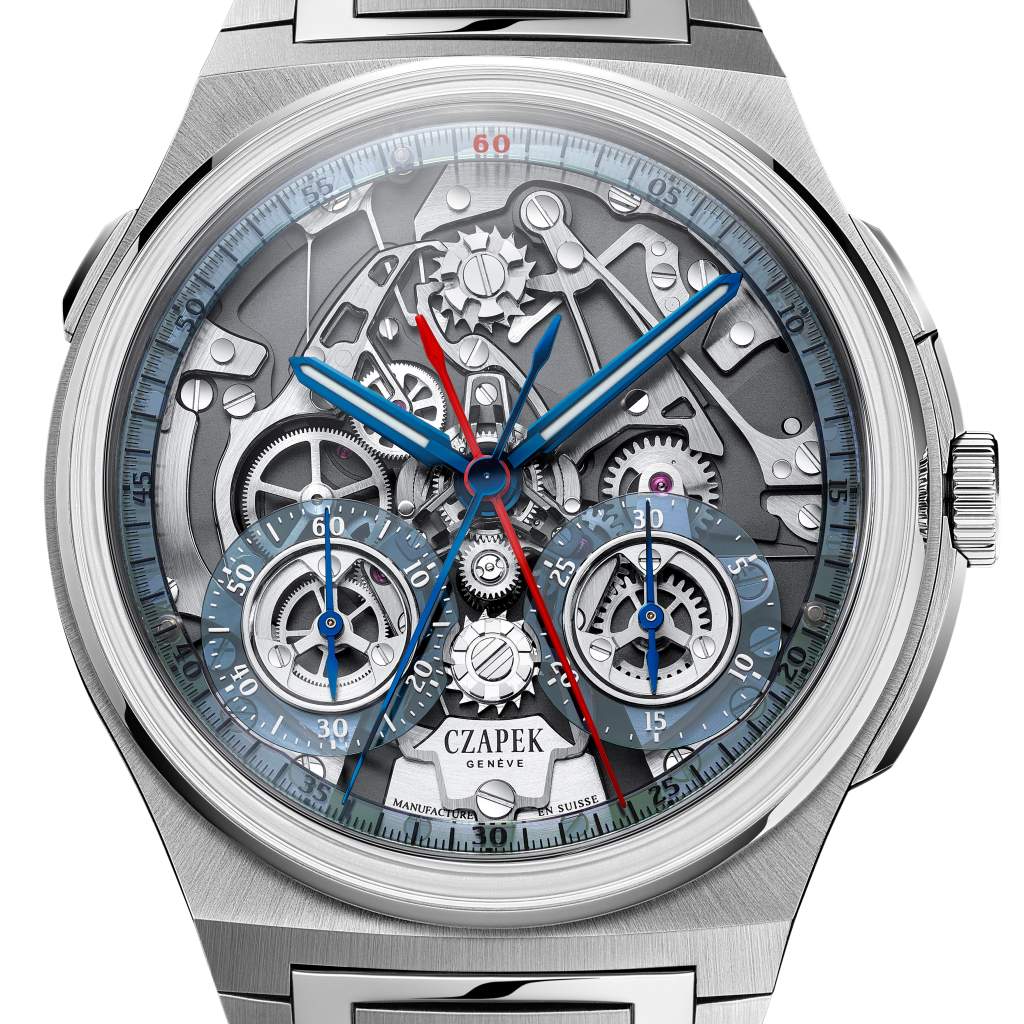 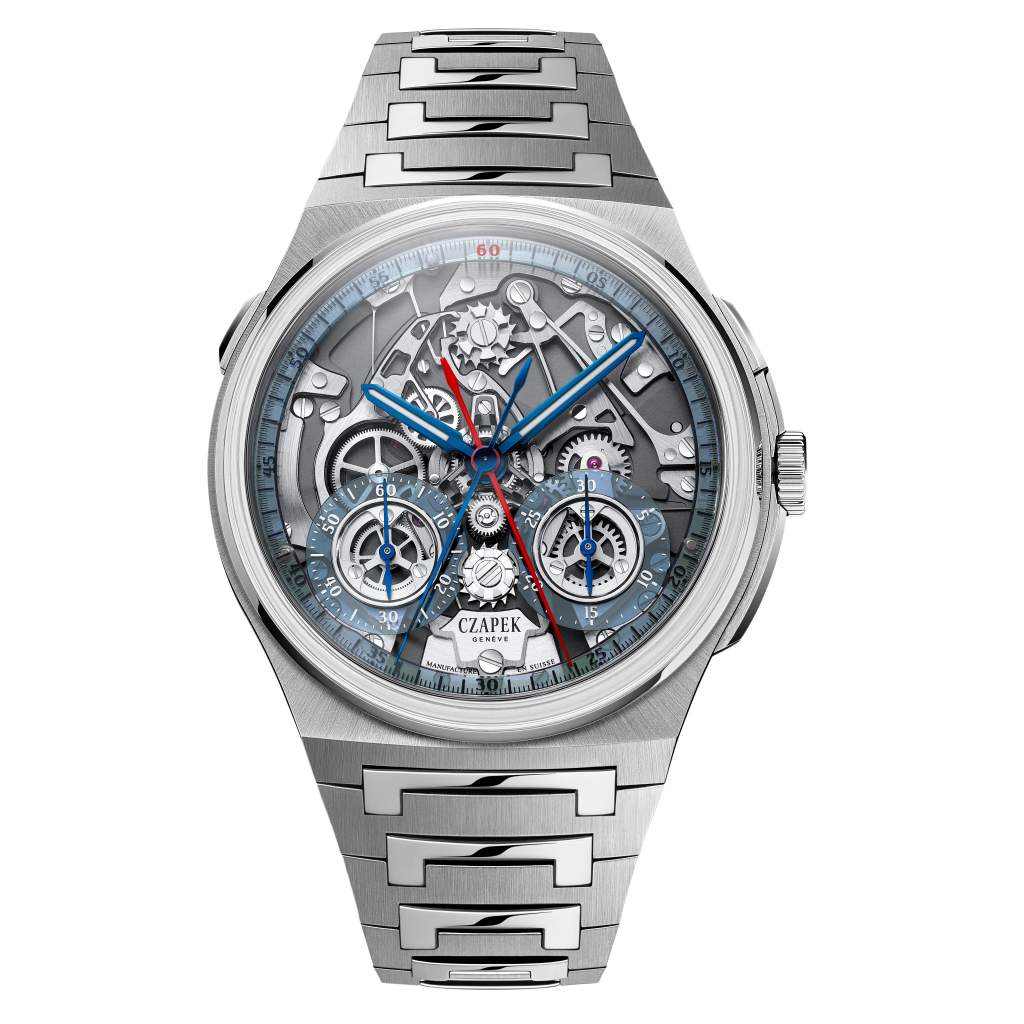 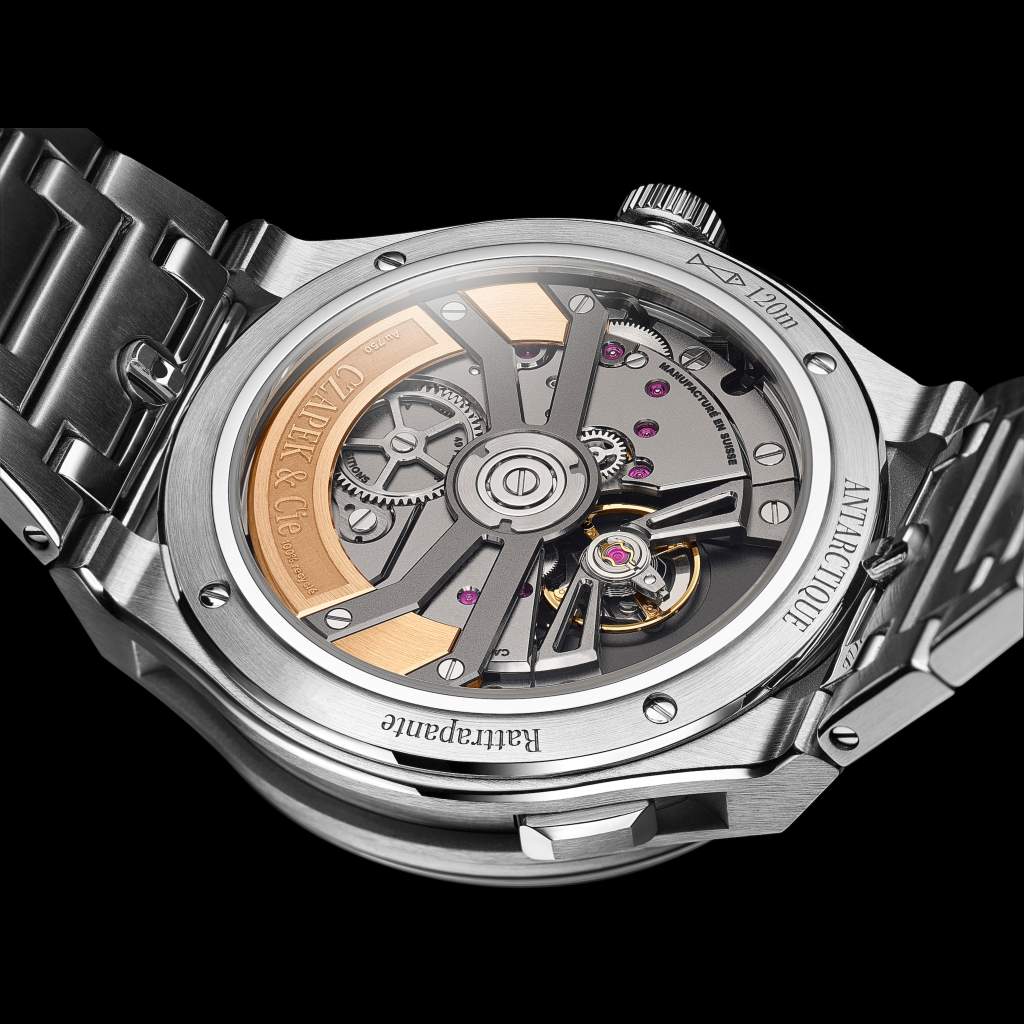 The Antarctique Rattrapante, the sportive, open-worked split-second chronograph by Czapek & Cie now appears with a touch of blue that enhances the hands and rings on its dial.

By doing away with the traditional dial, the mechanism is revealed and becomes an integral part of the watch’s aesthetics thanks the open-working technique, which requires great care with the decorating, the beveling, the polishing, and the various types of finishing.

The sapphire crystal in the front and on the exhibition case back reveal the intricate choreography of the dial-side mechanism. Immediately recognizable are the two “Czapek” subdials. At 4 o’clock is a 30-minute totalizer, at 7 o’clock tick the small seconds. In the center of the watch is the tripod bridge that holds down the patented satellite minute train and the split seconds-mechanism. Also clearly visible are the two column wheels needed for the chronograph and the split-seconds mechanisms respectively.

This model features traditionally blued hands that harmonize well with the weave of metallic greys inside the open-worked watch. A closer look reveals a fumé blue shimmer emanating from the minute track and the two totalizer tracks. The effect is produced by using sapphire crystal rings that have been treated with metal oxides applied by an evaporation process. Adding to the visual dynamism of the dial is the red chrono hand, known as the trotteuse in French, and the small red “60” at 12 o’clock. Another salient visual aspect, though, is the dance of levers and cams on the dial of this split second chronograph and the clamp, which instantly immobilizes one of the chrono wheels when the split-second pusher is activated. The other chronograph hand must then continue its time counting undisturbed. When the clamp is released, the immobilized hand will catch up (“rattraper” in French) to its companion. Each part must be manufactured to the highest specifications to ensure absolute precision.

“The split-second runs on energy tapped from the second wheel,” explains Xavier. “In this movement, we favored a horizontal clutch rather than a vertical one to highlight the aesthetics of the transmission.” Furthermore, to ensure the streamlined look of the watch, the number of parts and their thickness was reduced to a minimum. Everything had to fit in the 42.5-millimeter case.