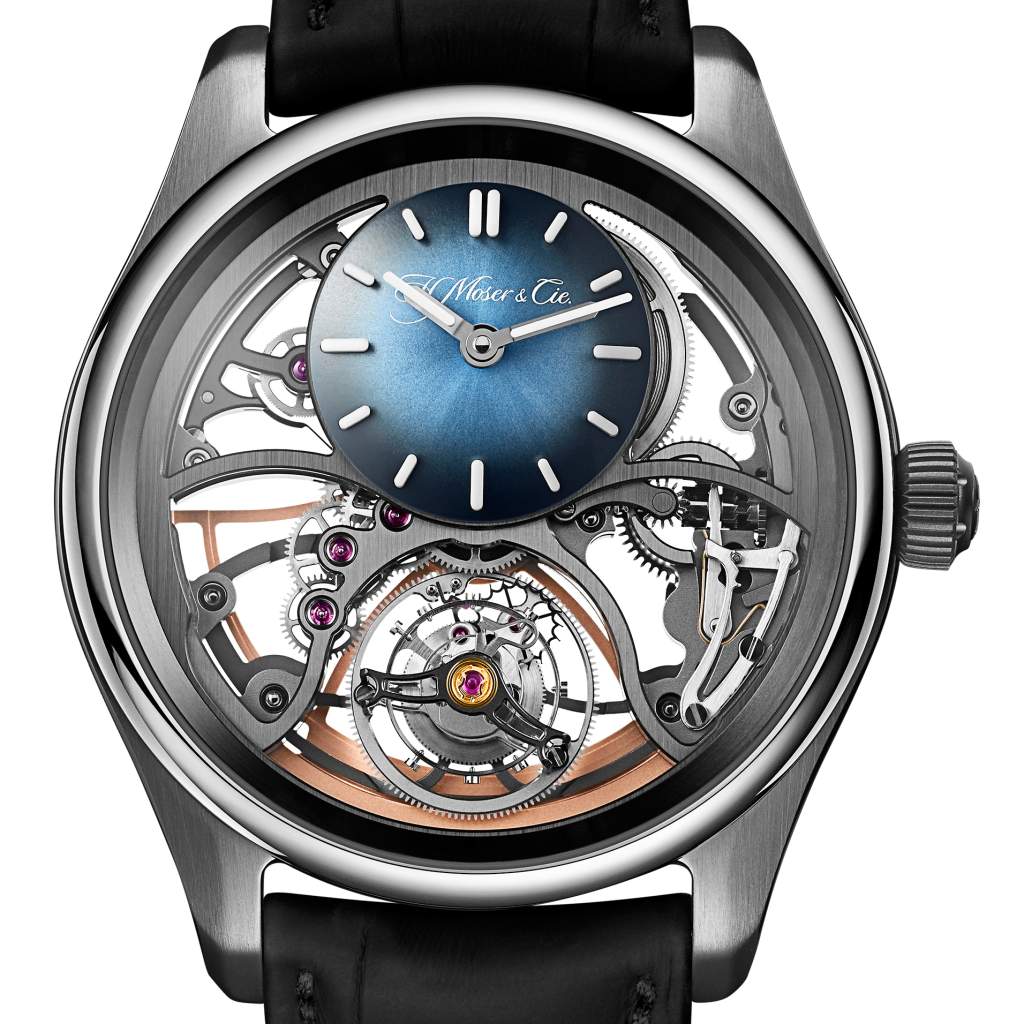 WELCOME TO THE THIRD DIMENSION WITH H. MOSER & CIE.

Three-dimensional power. This is what will strike you when first seeing the Pioneer Cylindrical Tourbillon Skeleton from H. Moser & Cie. With this skeleton model, the Schaffhausen-based Manufacture has taken a new approach to its cylindrical tourbillon movement, which applies the principles of H. Moser & Cie.'s expertise in this area. Under a slightly domed sapphire crystal, reflected in the curve of the sub-dial featuring Globolight® inserts, the one-minute flying tourbillon equipped with a cylindrical hairspring is especially eye-catching. Without a doubt, this is a dramatic, sculptural piece, but one which can be worn every day thanks to its balanced proportions and water-resistance up to 12 ATM.

H. Moser & Cie. cultivates the art of contrast. For this piece, the company consciously selected the Pioneer case. With its contemporary and adventurous look and feel inspired by the industrial world, it showcases the HMC 811 three-dimensional Manufacture calibre, designed to be a true work of art. This large, fully skeletonised movement with a 34 mm diameter enhances the "balletic dance" of the one-minute flying tourbillon, equipped with a cylindrical hairspring at 6 o'clock. Invented in the 18th century, the cylindrical hairspring rises perpendicularly around the upper stem of the balance spindle. A frequent feature on marine chronometers at the time, it offers the advantage of developing concentrically. Thanks to the cylindrical hairspring, fitted with two Breguet curves attached at two points, friction on the pivots is reduced and the isochronal properties improved, even more when the hairspring is combined with a tourbillon as is the case here. Today, the cylindrical hairspring is particularly difficult to produce because it requires very specific know-how and tools. The teams at Precision Engineering AG, H. Moser & Cie.’s sister company, had to remaster this expertise, as each cylindrical hairspring is shaped by hand, taking ten times longer to produce than a traditional hairspring.

At 12 o'clock, a small, domed sub-dial reflects the curve of the sapphire crystal and features the company's signature colour, Funky Blue fumé. The white H. Moser & Cie. logo has a certain subtlety about it, while the indices are much bolder: created using Globolight®, a ceramic-based material containing Super-LumiNova®, these add to the three-dimensional nature of the piece, as do the inserts which top the hour and minute hands, also in Globolight®.

A skeleton model of the new HMC 811 calibre is used here, on both the front and the reverse side, where a large, gold and fully open rotor oscillates. The beauty of this movement is further enhanced by the lightness of the flying tourbillon, which twirls gracefully under the sapphire crystal. The Pioneer Cylindrical Tourbillon Skeleton represents an important step for H. Moser & Cie., as it enters the skeleton watch segment and defines its own principles for this type of watchmaking.

The Pioneer Cylindrical Tourbillon Skeleton model features a black alligator leather strap, but can also be worn with a steel, rubber, textile or kudu leather strap, providing a variety of options. Even with its powerful yet elegant aesthetic, this dramatic piece is highly wearable thanks to its 15.3 mm thickness. Water-resistant to 12 ATM, it can be worn just as easily with a shirt as it can for sports or setting out on an adventure.

All the material used are Fair Trade. H. Moser & Cie. has fulfilled all the conditions to be RJC certified and guarantees a zero carbon footprint in manufacturing its timepieces by using more efficient methods and procedures, and by offsetting the residual footprint by buying carbon credits.