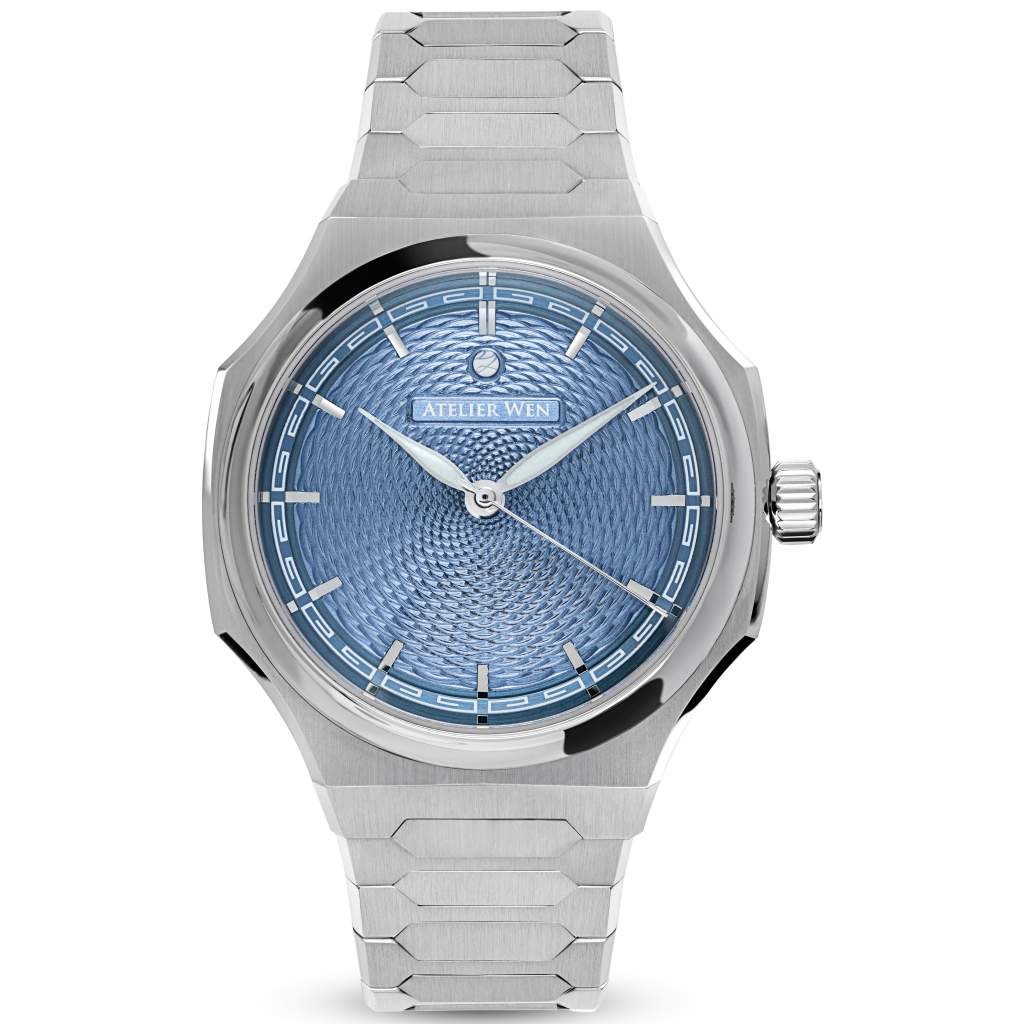 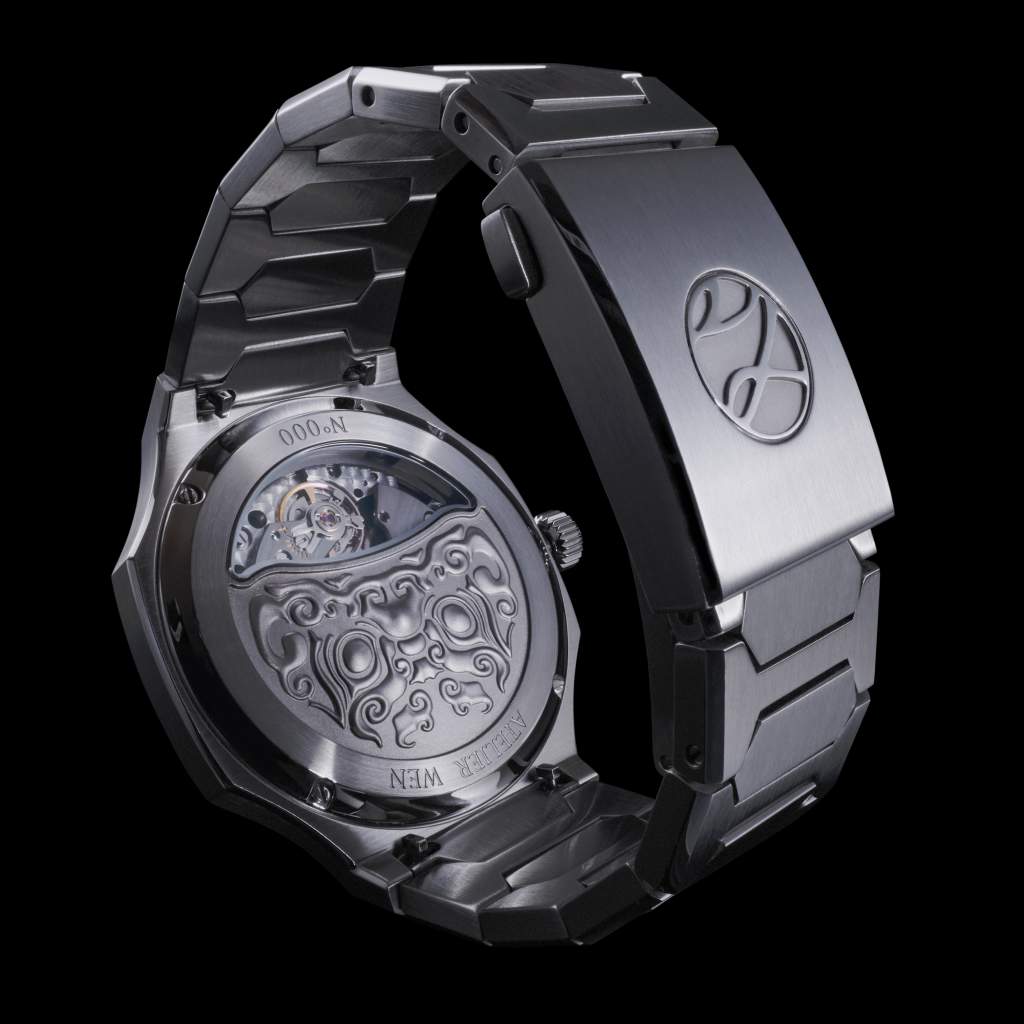 The dial of Perception is true hand-made guilloché, crafted using a rose engine by the only guilloché master artisan in the whole of China and Asia, Master Cheng Yucai. It takes him 8 hours to manufacture just one dial. Guilloché is a true métier d’art, mastered by less than 30 craftsmen in the world. Operating a rose engine necessitates an enormous amount of skill and at the slightest mistake, the dial will become scrap and Cheng will need to start again.

The dial has a Sunmao construction, a structuring approach which was used in ancient Chinese architecture and which consists in buildings created without a nail or glue through mortise and tenon. The whole of Perception’s dial follows this principle: on a first copper base sit two additional layers, which are guillochéd. In those are 12 cutouts that are for the raised indexes which neatly nest into them. Each index has a mortice which is designed to receive an elevated chapter ring which then locks in the indexes.

The case is made of 904L stainless steel and its shape is a reflection of different Chinese architectural characteristics. Its sides are inspired by the curved silhouettes of Chinese pagodas, while the top of the lugs also feature gently curved angles reminiscent of roof structures.

Spectacular attention to finish has been paid with sharp angles and contrasting surface treatments. Care has been applied to make the horizontal and vertical brushing particularly noticeable, almost clashing with mirror-like polished areas. The fact that 904L has been used make them even shinier and amplify this visual impression.

The case is extremely thin: just 9.4mm thick, including caseback and crystal and thanks to its layered construction, it wears even thinner. Despite this, the watch is water-resistant to 10 ATM.

The bracelet is also crafted in 904L stainless steel and its central links feature the same hexagonal shapes found throughout many elements of Chinese architecture including pagodas and windows. The same spectacular attention to finish has been paid with a strong vertical brushing throughout and sharp, mirror-like chamfers on the edges. The tightness between the links gives the illusion of a continuous piece of metal and the sharp chamfers immediately capture sight and are akin to a dynamic path instantly leading to the case and dial.

The bracelet features quick-release spring bars, and is complemented by a fully custom clasp with an on-the-fly micro-adjustment mechanism. It is operated through a large, central push button. It is extremely sleek, intuitive and satisfying to use: all is needed to do is to push the large button to either loosen or tighten the fit. You don’t even need to remove the watch from your wrist.

Perception has a semi-display caseback which allows for movement viewing while still having a nice, deeply embossed figure.

It depicts a 石狮子 or Shishi which is a stone guardian lion that you can find at the entrance of most temples and major old buildings. It was meaningful for us because the whole series is inspired by traditional Chinese architecture, and those guardian lions are an important aspect of it. The actual figure we display has been conceptualised by Liu Yuguan using cloud-like strokes, in keeping the somewhat surreal character we want the watch to convey.

When the rotor is aligned with the window, it almost looks like the lion is laughing, which contrats quite starkly with the sobriety and almost brutalist character of the rest of the watch. This is very much aligned with the series' ethos as we intended it to be a watch that can convey a wide pallet of emotions, that can be seen and understood from many different angles, and, therefore where everything is a matter of perception (hence the name).

缥 (Piao) denotes a blue that is ethereal, silky and misty. It does not have a fixed appearance, and is meant to change based on environment and lighting, which is indeed the case with Perception. It is reminiscent of vague images and sceneries, such as the looming appearance of distant mountains or the almost nostalgic beauty of a river waking up at the dawn of spring, fuelled by melting snow. It is hazy, elusive and hard to describe. Blue waves flowing peacefully to a distant place where the water and the sky meet.