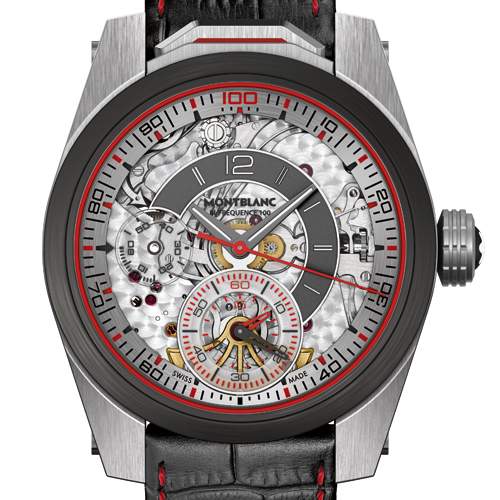 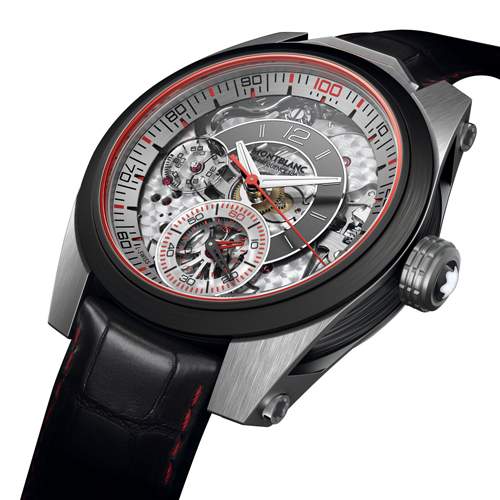 Highest Performance thanks to Precision Engineering and High-Tech Materials

A patented chronograph function enables the Montblanc TimeWalker Chronograph 100 to perform a feat that’s seldom achieved by mechanical timepieces: it can measure elapsed intervals to the nearest 100th of a second. To accomplish this, the watch relies on the Montblanc Manufacture’s nearly century-old competence for measuring intervals to the nearest 100th of a second. The Minerva Manufacture, which would later become the Montblanc Manufacture in Villeret, sparked enthusiasm among specialists in this disciple when it launched its first mechanical 100th-of-a-second stopwatch in 1916. Subsequent versions were equipped with a chronograph hand that requires just one second to complete a full 360° circuit of the dial. Precisely this principle is employed by the Montblanc TimeWalker Chronograph 100 with its newly developed manufacture calibre MB M66.25. This high-performance manufacture calibre is embedded in a case crafted from materials which are used in racing cars and which further accentuate the movement’s innovative mechanisms. Highly advanced materials and mechanisms are uncompromisingly combined with a manufacture movement that is built in accord with the centuries-old tradition of the art of Swiss watchmaking. Meticulous manual craftsmanship and decorative finishes uphold the rigorous standards of even the most demanding connoisseurs.

For a watch to measure intervals with 100th-of-a-second precision, its balance must be able to vibrate at a frequency of 360,000 semi-oscillations per hour (50 hertz). In conventional chronograph wristwatches, one and the same balance drives both the ordinary time display and the chronograph mechanism for measuring elapsed intervals. Activating the “start” function creates a connection between the going train and the chronograph; this link is severed when the “stop” function is triggered.

Due to its need for a frequency of 360,000 semi-oscillations per hour, the Montblanc TimeWalker Chronograph 100 cannot rely on the same mechanical principle as a conventional chronograph calibre, which vibrates at a much slower pace of 2.5 or 4 hertz. This necessity prompted the watchmakers in Villeret to devise a solution with two balances. A large, massy, screw balance oscillates at a frequency of 18,000 A/h (2.5 Hz) to ensure the precise rate of the going train, while a small balance paced at the extremely high frequency of 360,000 A/h (50 Hz) regulates the chronograph function. Rather than remaining continually in motion, the separate balance for the chronograph begins to vibrate only when the “start” function is activated by a flexible steel lamella (called fouet) mounted behind the arrowhead of the chronograph rocker. When the “stop” function is triggered, this slender steel plate arrests the tiny 50-Hz balance and holds it motionlessly in place until the next elapsed-time measurement begins.

The chronograph function is powered by its own barrel, which stores enough energy to measure intervals up to 45 minutes in duration. An elapsed-time measurement can be indefinitely extended by turning the crown anticlockwise while the chronograph is running, thus adding fresh energy to the chronograph’s barrel. The going train for the ordinary time display draws its energy from a second barrel that guarantees a 100-hour power reserve.

The Case is made of High-Tech Materials

The tripartite case combines various materials that are commonly used in auto racing and that accentuate the innovative character of the movement. The titanium steel bezel is coated with a layer of extremely scratch-resistant DLC (diamond-like carbon). The screwed back is crafted from titanium and bears an inset pane of sapphire crystal. Titanium sheathed with carbon fibre forms the middle piece of the case: Montblanc crafts this sheath as a seamless, complexly structured cocoon rather than merely gluing a simple carbonfibre shell around the titanium carrure. Several dozen layers of carbon fibre, with the fibres in each layer oriented at 90° to those in the preceding stratum, are fused together with artificial resin at high temperature with a pressure of 10 tons. This produces a compact carbon-fibre block. The case’s round sheath is stamped perpendicularly to the carbon-fibre layers to form a seamless “monoblock” which is then tautly stretched over the case’s titanium middle piece. The monoblock’s surface boasts a special horizontally striped pattern rather than the typically uniform texture of carbon-fibre. This intimate liaison between titanium and ageingresistant carbon fibre results in a lightweight yet remarkably robust case that optimally protects its precious mechanical inner life. The middle piece of the case is clamped between two pierced longitudinal titanium brackets. These transition into the characteristic skeletonised horns of the TimeWalker collection and give the case its distinctive TimeWalker look. The large crown is likewise crafted from titanium and topped by an inset Montblanc emblem made of mother-of-pearl. Nonslip crosswise fluting around the crown’s flanks facilitates manual winding, which can be performed in two directions: turning the crown clockwise tightens the mainspring for the going train, turning it anticlockwise provides energy for the chronograph function. As a reference to the stopwatch that Minerva launched in 1916, the chronograph button on the Montblanc TimeWalker Chronograph 100 is similarly positioned at “12 o’clock”.

The Montblanc TimeWalker Chronograph 100 will be produced in a strictly limited series of 100 timepieces.