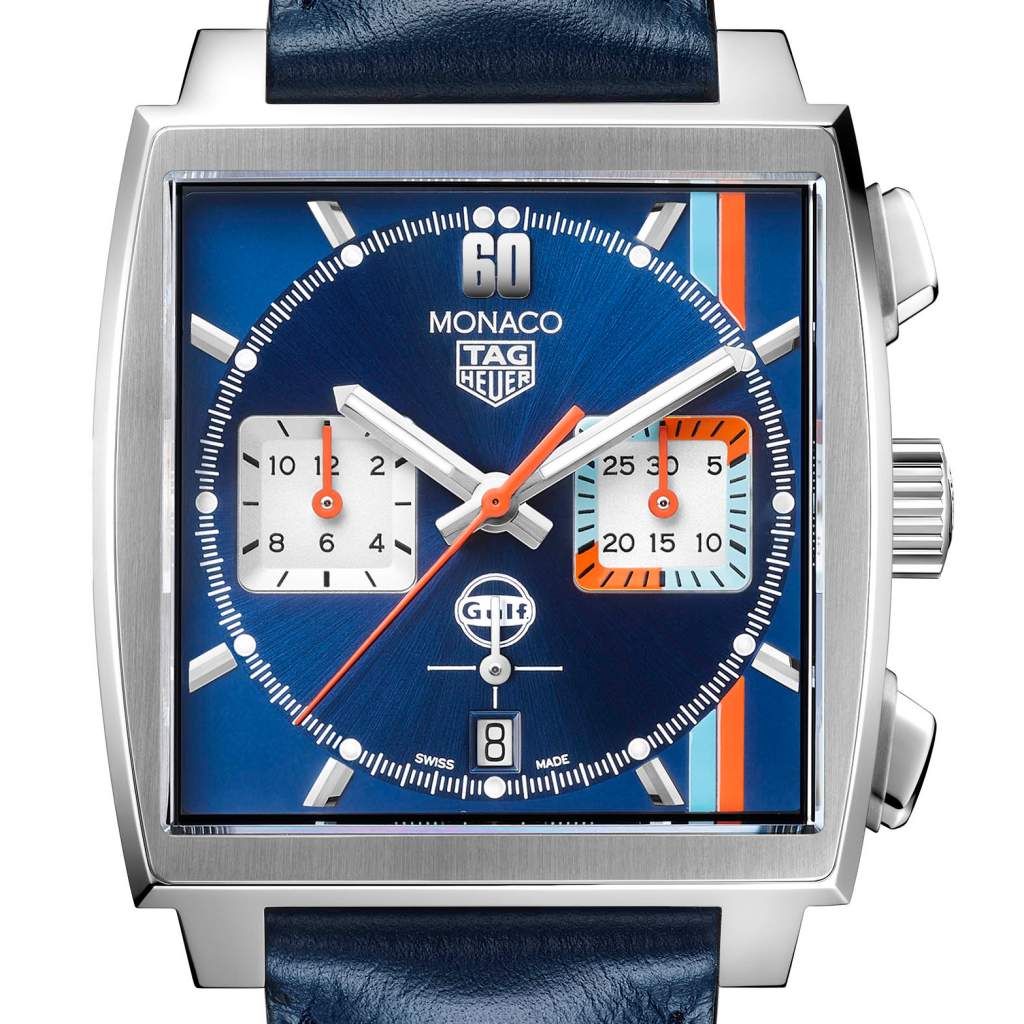 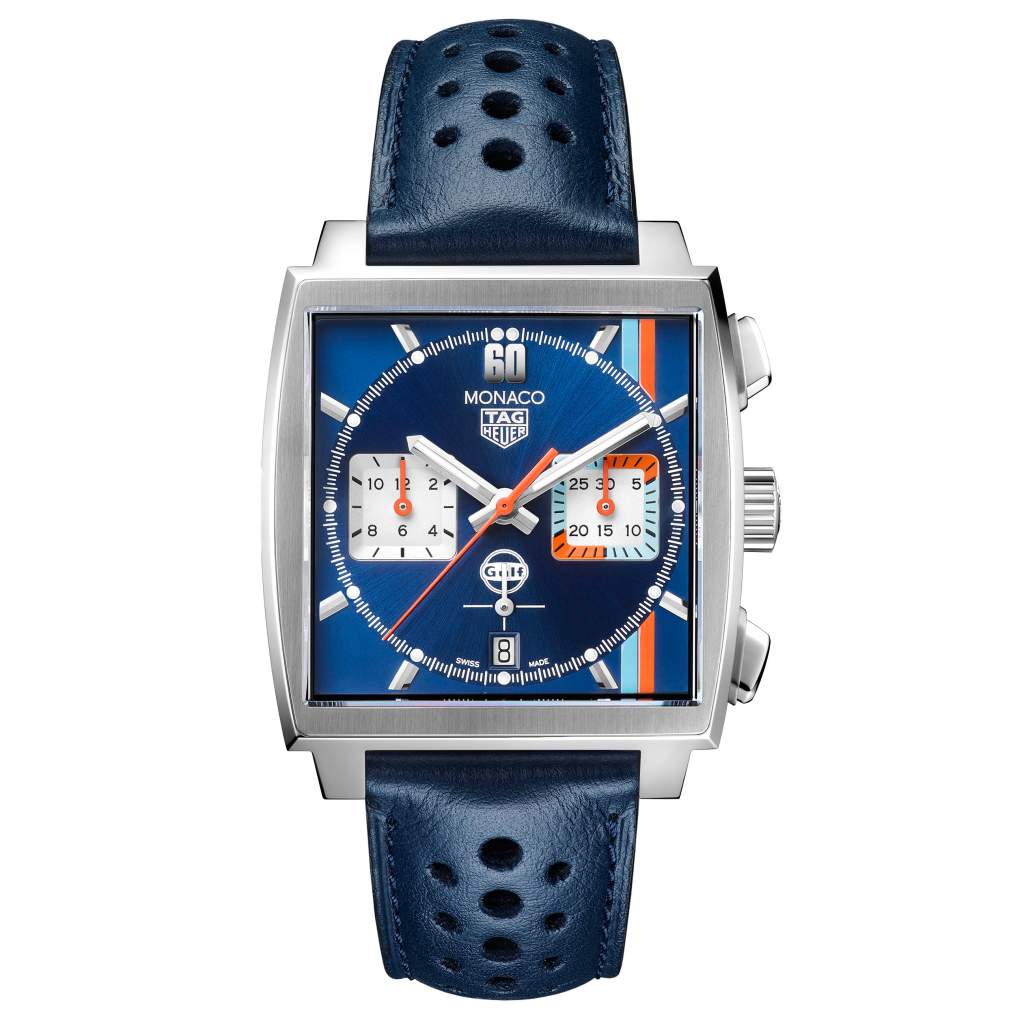 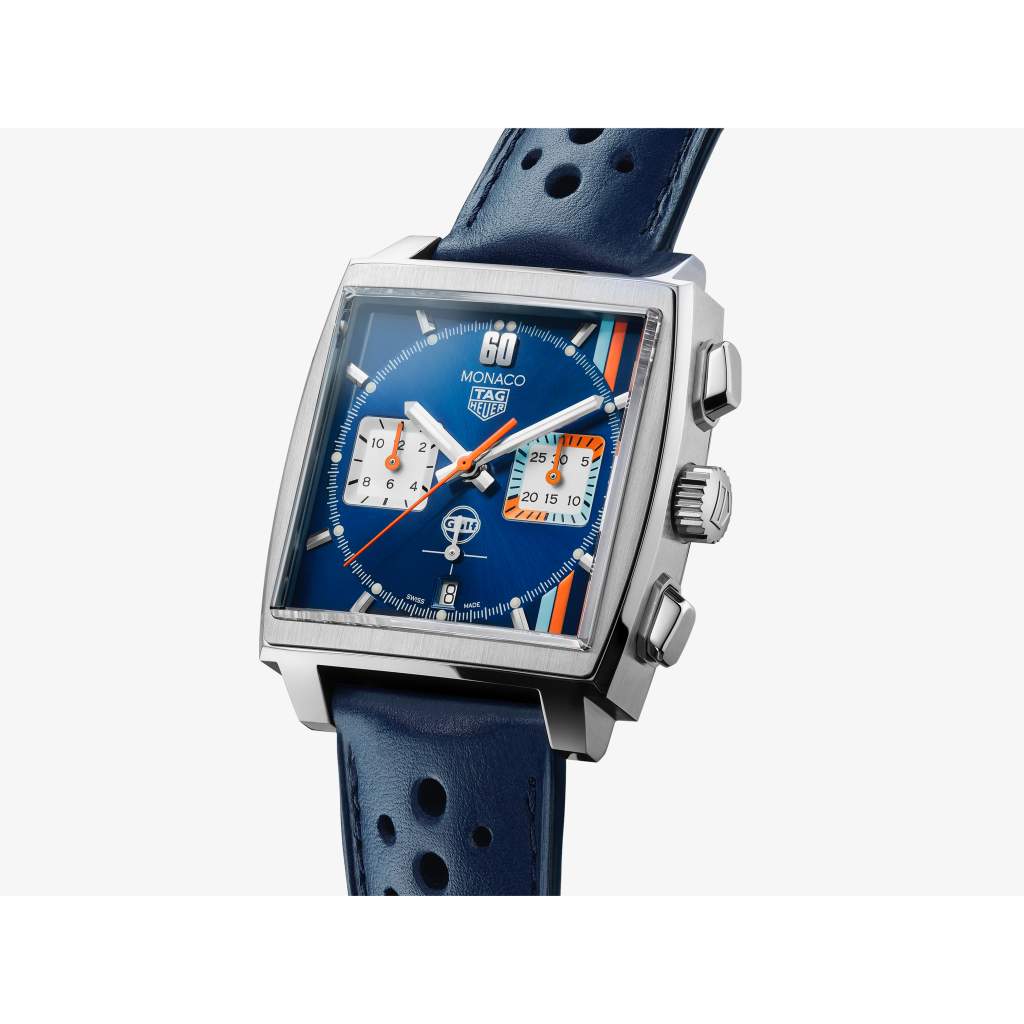 THE LEGEND IS BACK

One of the most awaited TAG Heuer watches is back with a new refined version, including for the first time ever, the in-house movement Heuer 02.

Watches & Wonders, Geneva - 30th March 2022 : Just in time for Watches & Wonders, the Swiss Luxury Watch Manufacturer releases a new edition of its iconic TAG Heuer Monaco made with the partner Gulf. The co-creation wears the legendary colours and design of the Gulf brand and is equipped with the in-house movement Heuer 02 - a premiere for the Monaco Gulf edition. Eagerly awaited by watches collectors, the new TAG Heuer Monaco Gulf is a Special Edition timepiece.

The Monaco Gulf’s story begins with the passion for top-tier of motorsport. The Gulf brand, became iconic in the world of racing thanks to its defining livery of vibrant blue and vivid orange which adorned the teams that it sponsored. In the golden era of racing spanning the 1960s and 1970s their main partner would be JW Automotive Engineering, a name that has left an indelible mark on the history of endurance racing.

JW Automotive Engineering is perhaps most clearly remember for its involvement in the 24 Hours of Le Mans with overall wins in 1968, 1969 and 1975. In addition the team field entries in 1970 and 1971 with some of the most celebrated drivers of the era, including the famed Swiss pilot Jo Siffert, aboard the technical tour de force that was the Porsche 917.

At this time, Siffert was a friend of Heuer, one of the first ambassadors as we know them today, and also the driving coach of Steve McQueen for his movie Le Mans. This is how the connection with Gulf, TAG Heuer and Porsche first came life: the Porsche 917 in the signature colours of Gulf and Jo Siffert at the wheel, that would lead to the association with Steve McQueen who drove the same car in the mythical movie, wearing the Monaco on his wrist. When all of these elements are seen together it is clear why this partnership is one of legends, elevating the Monaco even further in its iconic status.

In 2007, in honor of this defining association, TAG Heuer decided to create a Monaco edition using the Gulf colors and since then, each timepiece from this special collection was a great success and highly collectible.

For the 2022 edition, TAG Heuer strikes once again with an even more stunning version of the Monaco Gulf Edition. More refined, with a beautiful design and the in-house Heuer 02 movement that is housed in the fine brushed and polished steel case, the TAG Heuer Monaco Gulf Special Edition is a true eye-catcher.

Of course, the design continues to be based on the three iconic colors of Gulf but this time in a more contemporary colour combinations: the special dark blue, turquoise, and orange. With these new elements and a little twist, this new TAG Heuer Monaco Gulf version becomes all the more unique and features more refined Gulf touches.

Focusing on the watch’s dial, the sleek Gulf touches are mixed with the refined aesthetic of the Monaco. The Gulf accents have also been featured in an elegant way and for the first time, the three colors are present on the minute sub-counters at 3 o’clock, too. Also a premiere in the Monaco Gulf watch editions, the Gulf logo on the dial is totally white.

To emphasize the elegance of the watch, the opaline sunray brushed dial brings to the watch an interesting aesthetic duality. And last but not least, the 12 o’clock index is replaced by the number “60” – polished and rhodium plated - as a nod to the racing number on the Porsche Gulf racing cars.

On the back of the TAG Heuer Monaco Gulf Special Edition, the TAG Heuer designers worked on a personalised version of the oscillating mass and column wheel with a special engraving coloured to match the Gulf orange pantone.

To complete the sporty but sophisticated look of the watch, the strap is made with of perforated blue calfskin leather and an orange lining. Although the strap has the typical perforation made especially for the Monaco Gulf editions, the holes now have different sizes, a reflection of the design originally fitted to Monaco models in the 1970s, bring a touch of the past to this Special Edition timepiece.