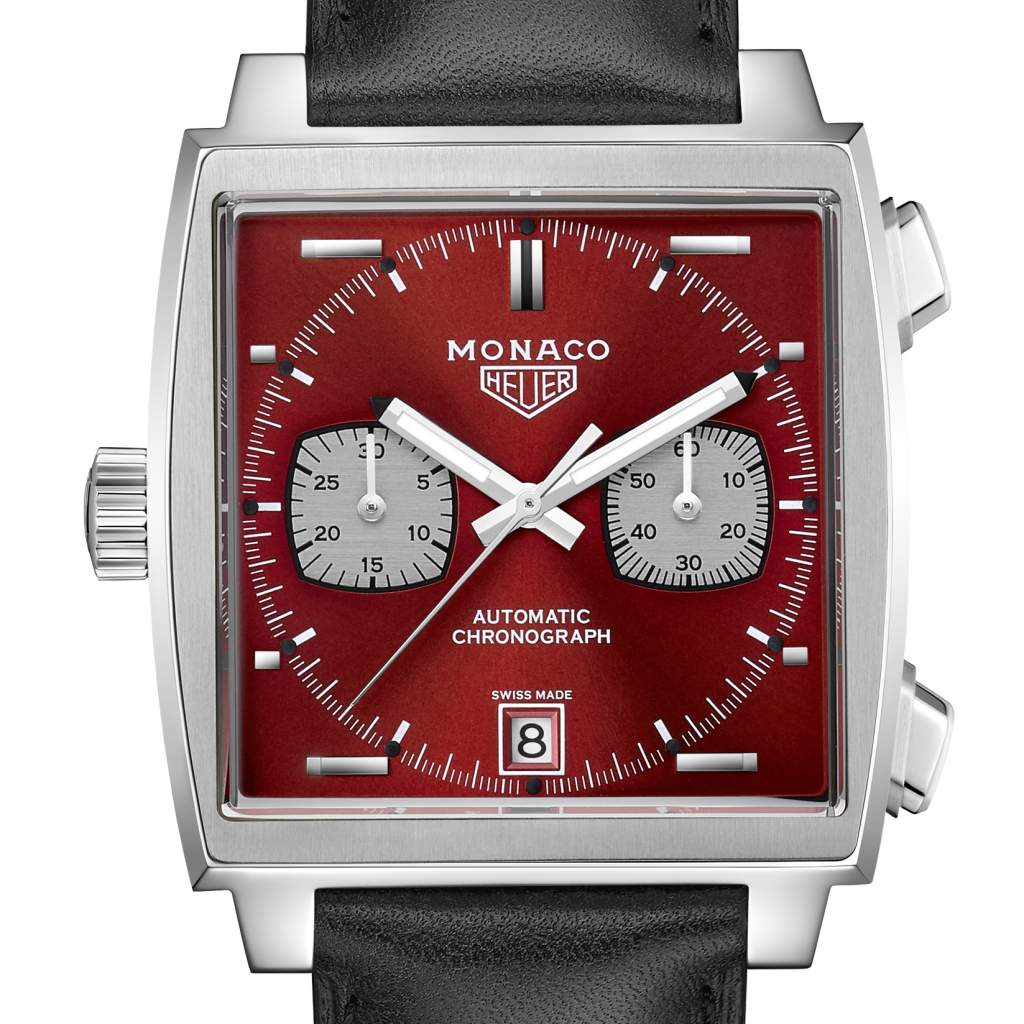 First chronograph to be square, waterproof, and automatic, equipped with the Calibre 11, famous for its crown on the left side

Embodied by Steve McQueen in the movie Le Mans released in 1971.

This limited edition is part of the Through Time concept, a set of five Monaco, each of them highlighting a decade. The 80s one has been selected for GPHG as the most striking version. No Monaco had ever dare to be red.

Launched on the 3rd of March 1969, the Monaco has not much changed for half a century, neither aged. Symbol of innovation by its design and technology, it has always been different:

- contrasted subcounters and a hint of red on the dial,

- crown on the left side of the case

Behind this, the aura of two men, Jack Heuer, then CEO and Steve McQueen in the movie Le Mans and a tumultuous story. The Monaco is THE paradoxical icon.

Celebrating the 50th anniversary of the Monaco, TAG Heuer invented a new version in terms of colors to symbolize the 80s, very much “Racing Red”. Limited edition of 169 pieces, hint to the Monaco year of birth.

The steel caseback is plain, inspired by the original Monaco, and engraved with the “Monaco Heuer” logo as well as “1979-1989 Special Edition” and “One of 169”.

The color combination, metallic red, silver and black, is directly inspired by the 80s. The sunray finish has this perfect touch of the 80s, synonymous with cutting-edge design and racing victory.

Black and white accents on the dial perfectly complement the black-tipped hour and minute hands,
polished, facetted indexes, horizontal like in the original Monaco. Hands are coated with SuperLuminova®.

The strap is a black calfskin leather lined in red, with the motoracing holes like in 1969. Polished folding clasp in stainless steel

The 1969 Calibre 11 was based on a micro-rotor for the automatic rewinding system and an additional layer for the chronograph module.

Today is an improved version with an oscillating mass at the backside of the movement for the rewinding system but the crown remains on the left side thanks to a specific development for TAG Heuer, to be true to the iconic codes of the Monaco.

Like the watch itself, the watch box is also inspired by the original. The 1970s-inspired model is packaged in a dark blue box decorated with the Heuer logo and a horizontal chequer-pattern stripe. The watch is placed on a grey cushion and surrounded by a red interior – the same colour found on the dial