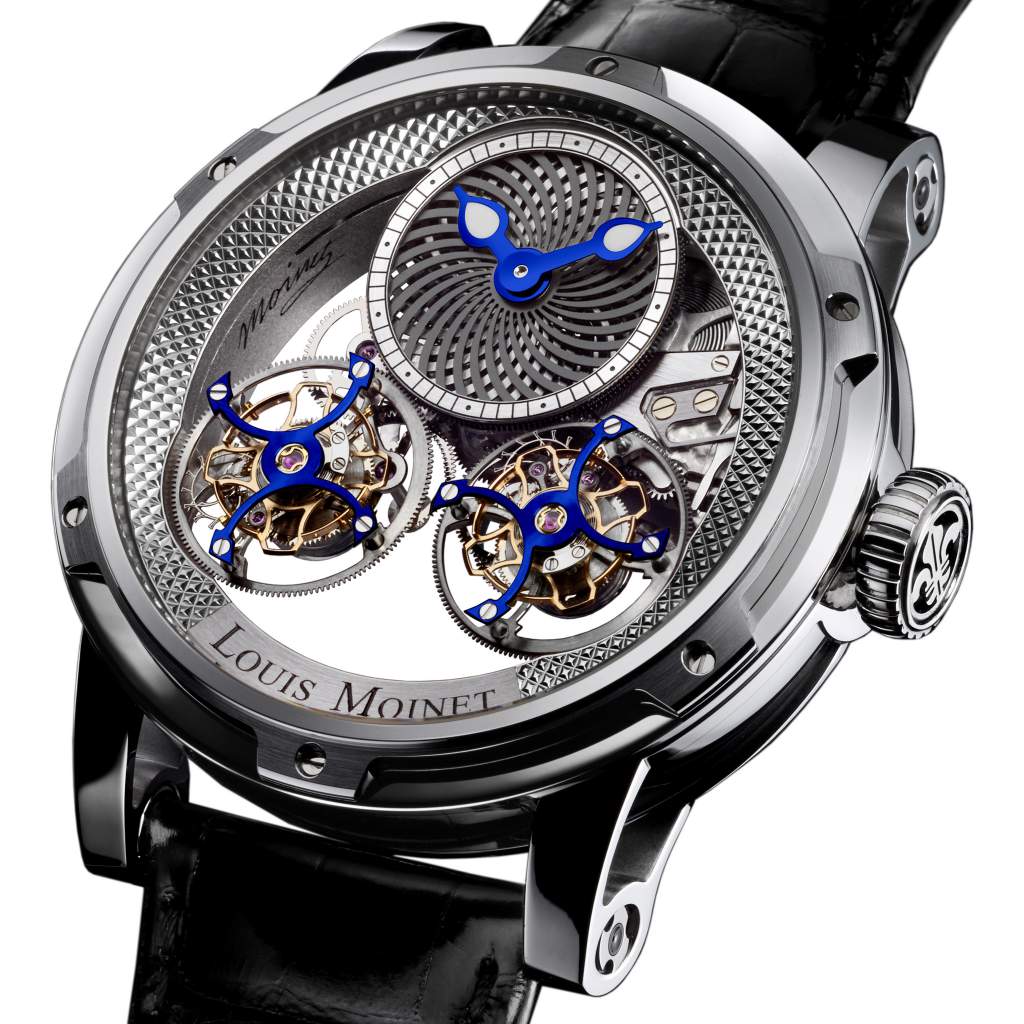 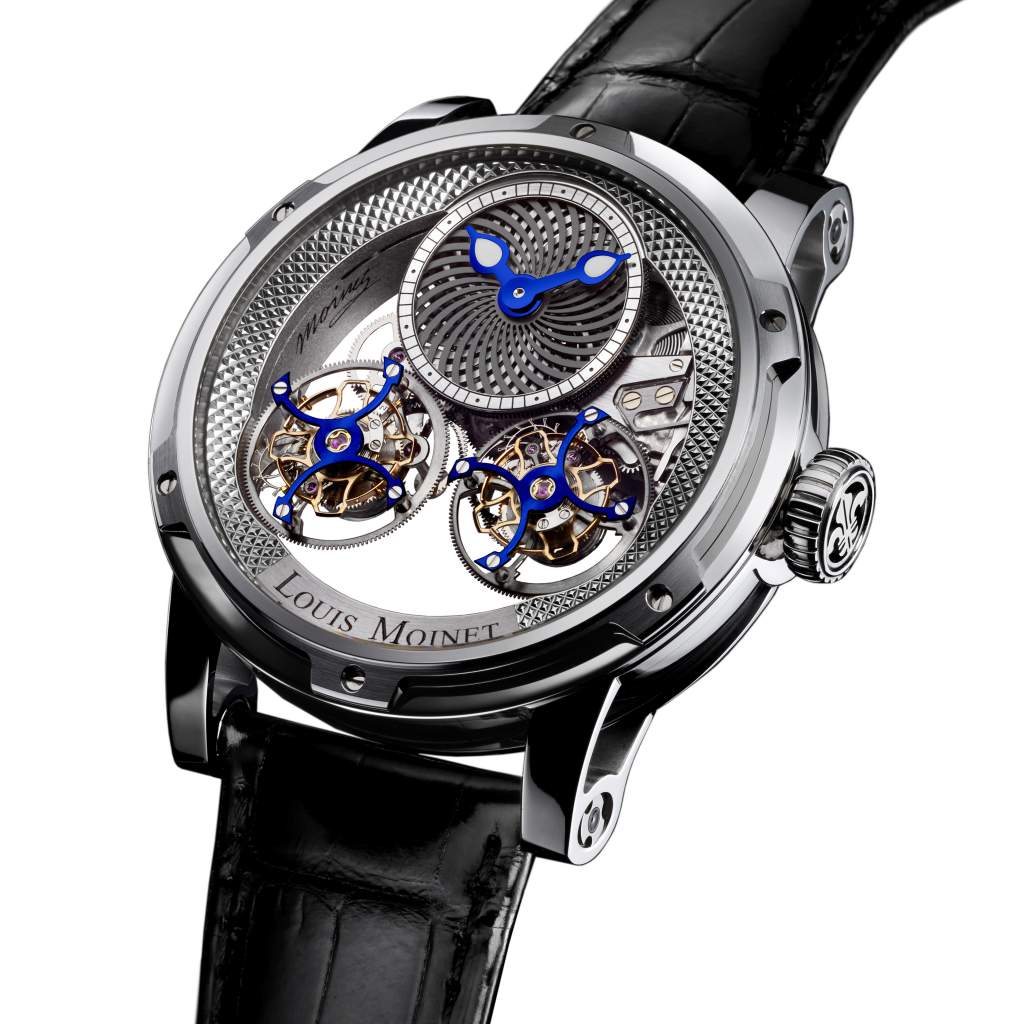 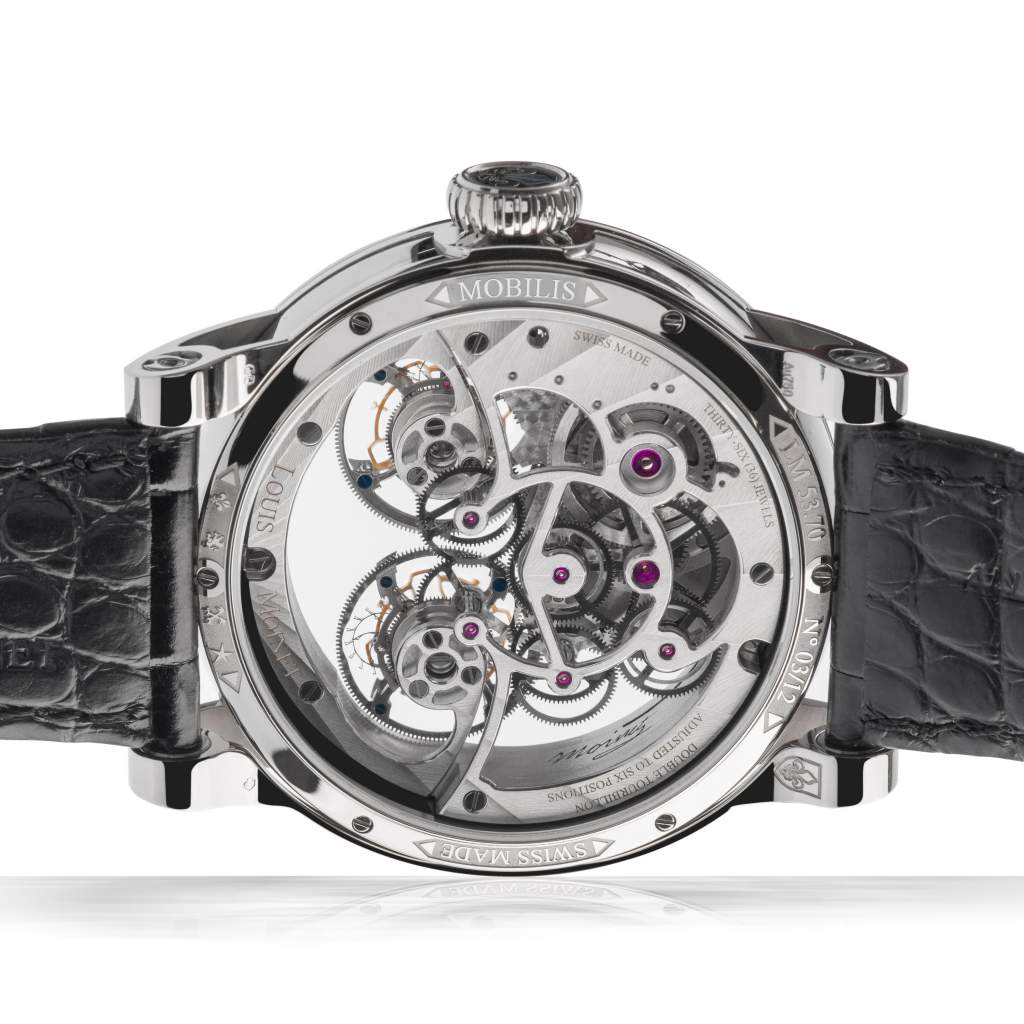 Mobilis in Mobile – please welcome the Louis Moinet Mobilis – The ‘indie’ watchmaking brand honouring the memory of the great Louis Moinet unveils a sculptural, hyper-active and hypnotic watch. On the dial of Mobilis, no less than a double tourbillon powering a mesmerizing kaleidoscope automaton.

Louis Moinet has a taste for powerful aesthetics and the brand’s latest creation is no exception. The name says it all. Mobilis – active/mobile in Latin is a stunning piece of engineering, its animated inner workings on full display for all to see and appreciate. Its fascinating ballet is based on two tourbillons, unusually rotating in opposite directions, which power a hypnotic kaleidoscopic complication at 12 o’clock (right beneath the hour and minute hands).

The two large flying tourbillons are mounted on ceramic ball bearings and appear to be floating in mid-air. The absence of any upper bridges allows for an uninterrupted view of the myriad of mechanical processes taking place. Despite their large diameters (14.9mm), each cage weighs only 0.4 grams. The magic of the kaleidoscope dial at 12 is animated by two overlapping cut-out discs and driven by an inverted gear system. Hours and minutes are shown on this animated off-centred dial with elegant “Gouttes de Rosée” (dew-drop in French) hands.

The movement is framed by an inner flange, decorated with a “Clous de Paris” hobnail pattern and engraved with the brand’s name; a perfect match with the skeleton-work and the mix of modern and traditional finishing which we’ve come to expect from the brand. The play of light within this moving 3D architecture is truly eye-catching. The watch most certainly deserves its “Mobilis” name.

The exclusive calibre LM-53 runs at 21,600 vibrations/hour and offers a power reserve of 52 hours. Housed in a round case made from white gold, the modern design includes open-worked lugs and a bezel with 6 notches and screws. Its large fluted crown is adorned with a heraldic fleur-de-lys, a symbol of French kings and also the brand logo. The sapphire crystal is slightly domed.

Despite its large diameter (47.4 mm), the Louis Moinet Mobilis wears well, thanks to its lug design and its soft alligator strap that hugs the wrist snugly. It is closed by a cool folding buckle which also features the brand’s fleur-de-lys logo.

The Louis Moinet Mobilis is an exquisite watch that is at once modern, technical and architectural. The visual impact of the two regulating organs side-by-side, together with the kaleidoscope, is truly spectacular.