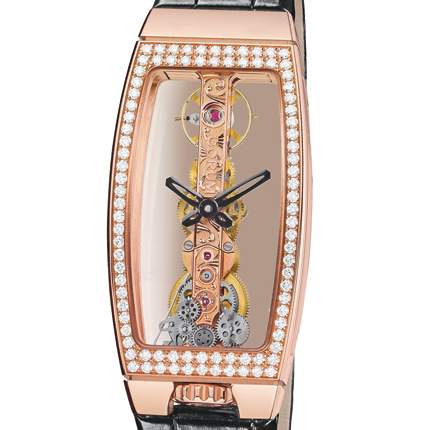 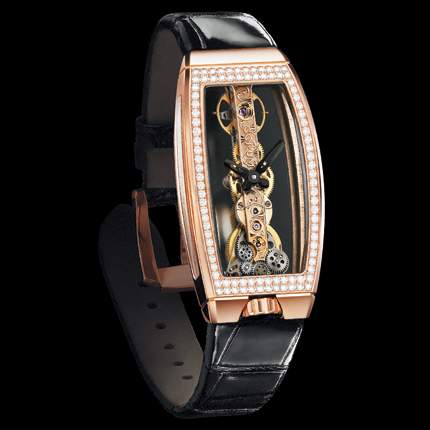 In 2010, Corum celebrates the 30th anniversary of its legendary
Golden Bridge movement.

Return of a legendary model
When Corum created the Golden Bridge in 1980, did its founder René Bannwart imagine that he had just launched a model that was not only a mainstay one of the pillars of his company, but also an icon of Swiss watch making?
The remarkable design of this timepiece, all in transparency, was certainly in line with the brand philosophy whose intent was to position itself in the forefront of the Swiss Watch industry. This model joined an already creative collection offering amongst others, two models poised to have a successful future: the very sporty Admiral's Cup watch, and the elegant Romvlvs. It also reached an area of the watchmaking industry where very few watchmaking manufacturers had chosen to venture: the creation of the "baguette" movement.

Thirty years later, this movement, which has since become legendary, remains an exceptional achievement and a unique watchmaking expression. Composed of 140 elements arranged in a parallelepiped rectangle 33 mm in length, 3 mm in width and less than 5 mm thick; a masterpiece of micromechanics offering a balance wheel with variable inertia, a barrel with slipping spring, power reserve of 40 hours, 4 hertz frequency ensuring reliability and precision, and hand-engraved bridges and plate made of fine gold. At this level of miniaturization, there are few other competitors.

Everything changes as the movement is housed in a unique new case. The case, open above, below and also on its sides, still plays on the effects of transparency and allows the movement to be admired from all sides, thanks to its sapphire glass. However, it is revisited in a very feminine manner, in a slender and curved tonneau shape. The horns were removed to allow the hand-stitched alligator strap to perfectly integrate into the case, keeping the continuity, like a cuff watch. The winding crown at 6 o'clock accentuates the refined character of this contemporary and elegant case. Similarly to the open-worked hands, the bezel has been slimmed to the point of being discrete to emphasize the main subject of this masterpiece: the caliber CO113.

For the latter, nothing changes. It remains a strong haute horlogerie creation, encased in less than a half-cubic centimeter. The magic continues, born from wheels in motion which seem to dance between two slender bridges made of fine gold that are finely hand-decorated by Corum's master engravers, adorned with engravings replicating the shape of tree ferns from the Jura region. For consistency, the hands are made of the same gold as the case: 18 carat white gold or red gold. Slender and delicately decorated, the caliber CO113 gives femininity and refinement to this striking timepiece. Endowed with this highly complicated manufactured movement, the Miss Golden Bridge will be available in limited quantities: no more than 333 pieces a year. The timepiece will be available in 18 carat white or red gold, in non set and set versions with 90 full-cut size diamonds.