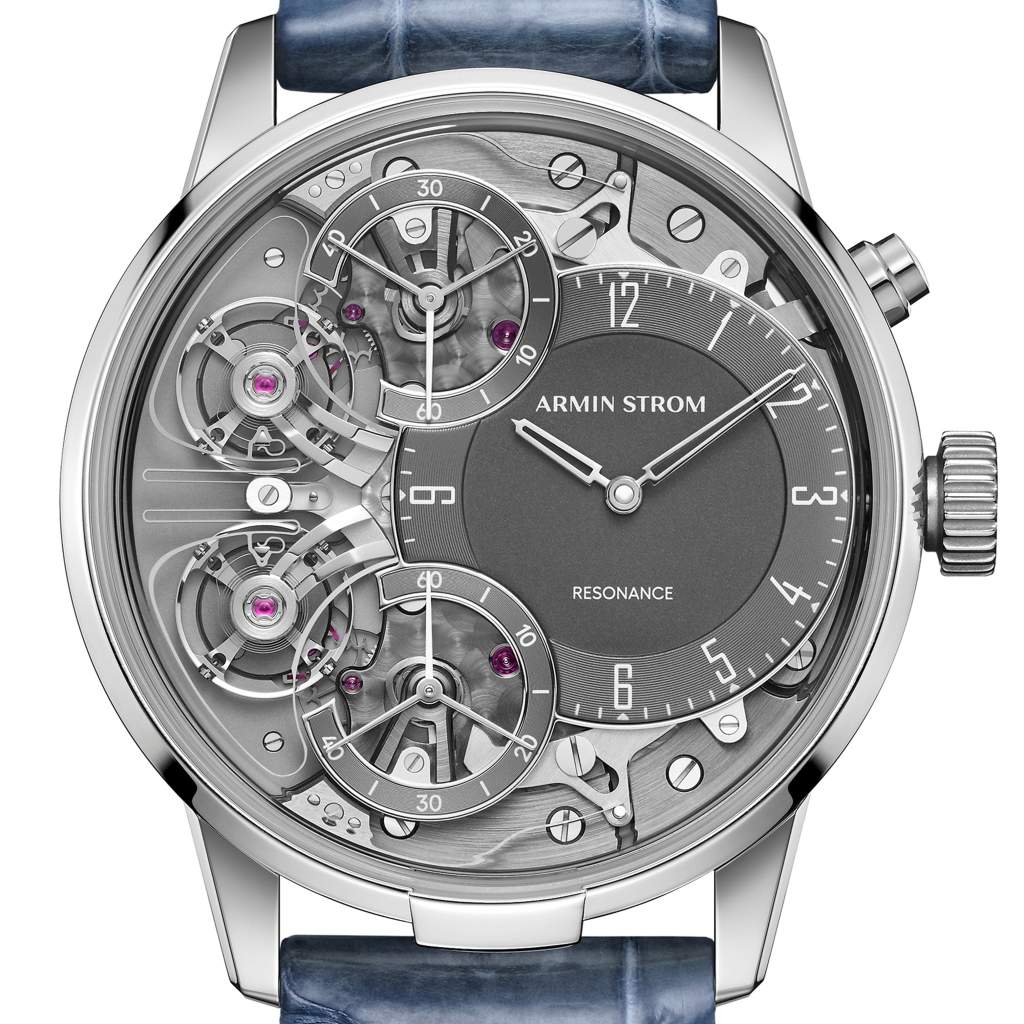 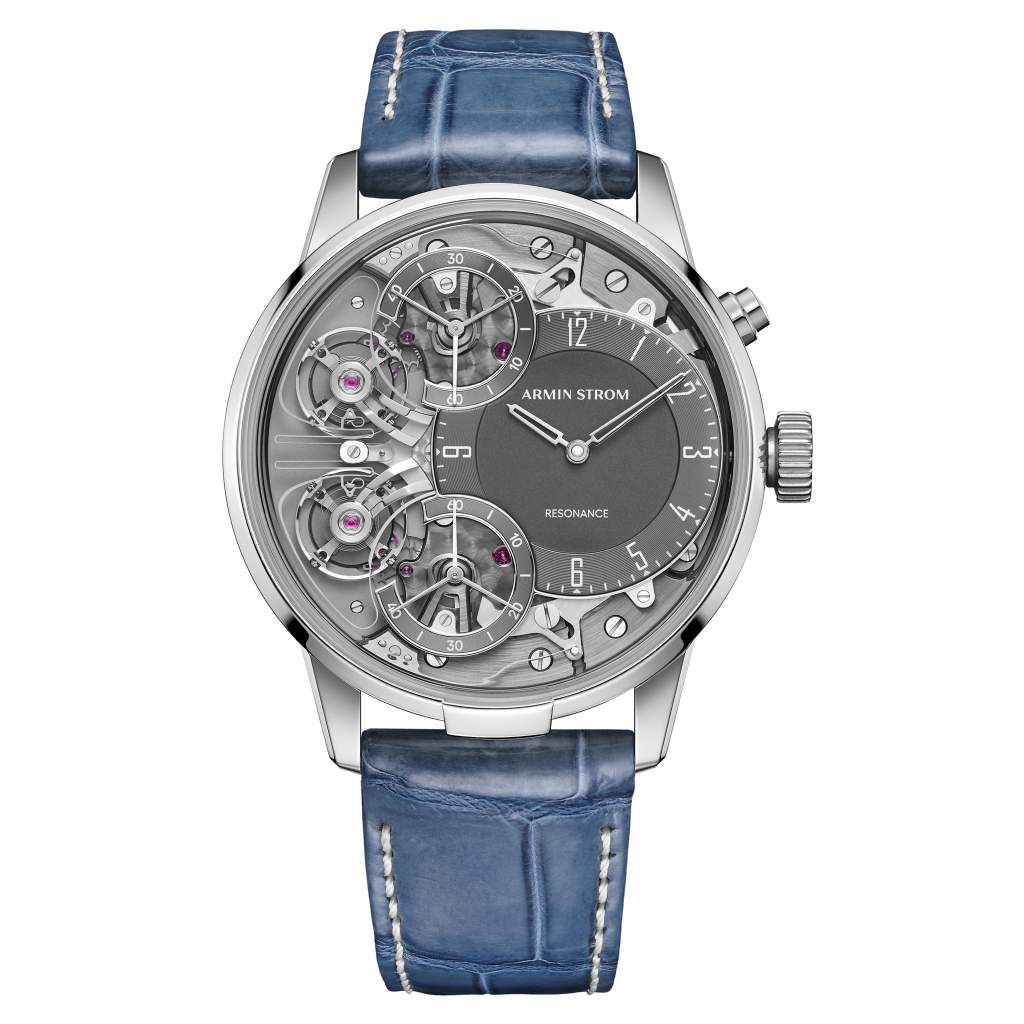 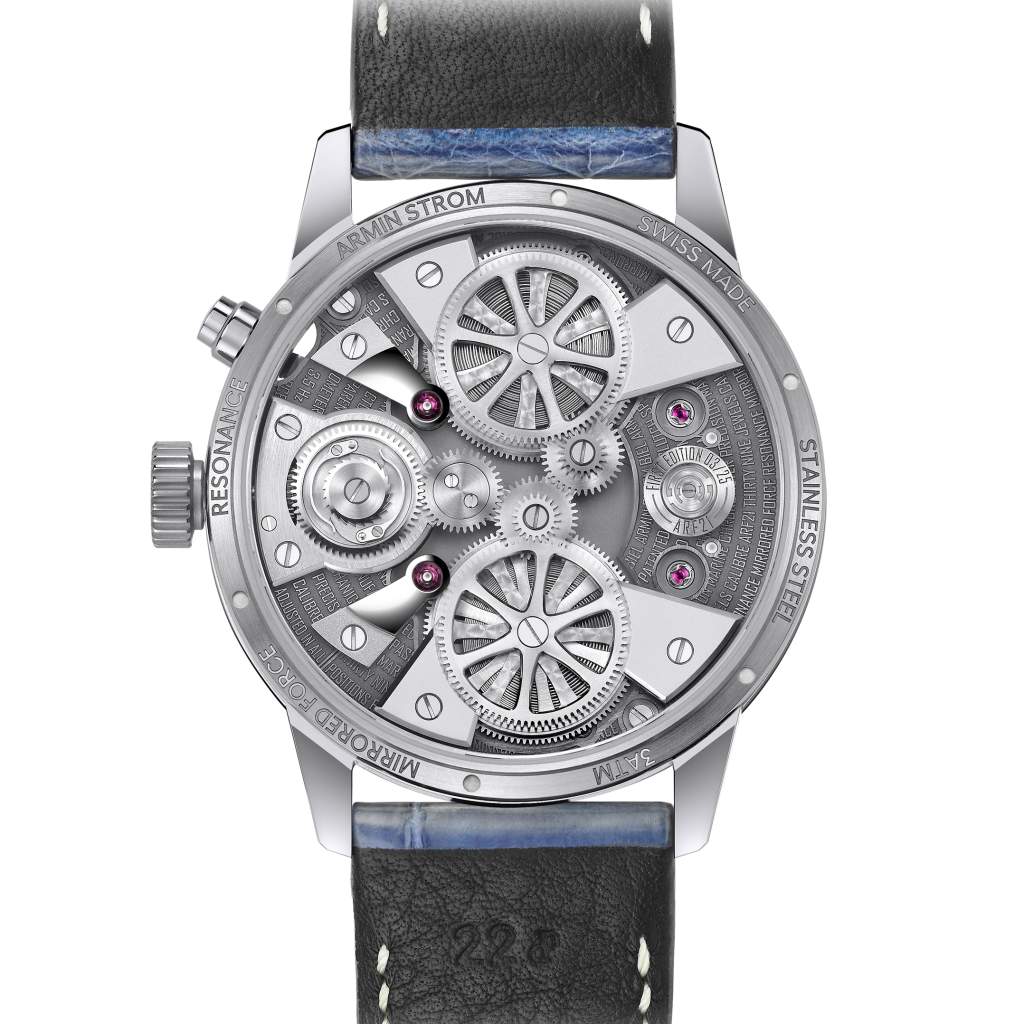 A micro-mechanical revolution, the new Mirrored Force Resonance First Edition in steel with a black gold colored dial is the result of years of intensive research by Claude Greisler and the Armin Strom manufacture in incorporating the physical phenomenon of resonance in watchmaking for the ultimate chronometric stability. It works by means of the patented Resonance Clutch Spring, which directly connects the two hairsprings for the fastest and most regular resonant state ever witnessed in a wristwatch.

Revisiting the independent manufacture’s milestone creation in 2016 from a new vantage point, the entirely redesigned Mirrored Force Resonance takes the winning formula of superior chronometric stability and reimagines it using a new, refined design language. From the outside, the case has been redesigned from scratch in more slender proportions (43mm x 11.55mm), with slimmer, more elegant lugs, as well as a very subtle signature Armin Strom “lip” at 6 o’clock.

The raised sapphire glass box reveals the innovative and truly one-of-a-kind movement from multiple angles and has been redesigned for a more open, three-dimensional look. Most notably, the two balance bridges have been openworked for more visual harmony between the two synchronized balanced wheels and the off-centre dial. The pusher at 2 o’clock allows the two running seconds indicators – which rotate in mirrored clockwise and counter-clockwise motions – to be reset to zero and visually track the state of resonance.

The backside of the watch over reveals the extent of the movement’s complete redesign. Inspired by the golden age of precision marine chronometry, the engraved main plate outlines the specific characteristics of the Mirrored Force Resonance in raised text.

Highlighting the fact that the ingenuity of the Resonance is having two movements beating in sync with independent energy sources and gear trains, the symmetry of the movement is accentuated with its mirrored arrangement of open bridges and gears. This open execution also allows the Armin Strom manufacture to showcase its expertise in hand finishing while also shining a light on the brand’s history as a preeminent maker of skeleton watches. The wider hand-polished chamfers on the bridges and countersinks and the mix of satin-brushed and mirror-polished surfaces also exude a superlative and distinctly haute horlogerie quality that can only be achieved by the hands of skilled artisans.

The Mirrored Force Resonance not only deftly demonstrates the ingeniously conceived and patented Resonance Clutch Spring in action, but allows the wearer to track its performance with twin-second indicators linked to the two resonant regulating organs, which can be synchronized using a flyback function activated by a pusher on the case.

Crafted from a single piece of steel, the Resonance Clutch Spring is designed to transfer energy between both hairsprings and quickly bring the balance wheels into resonance. Armin Strom’s newest generation of resonance is the quickest and most reliable on the market, synchronizing faster than any other watch that uses resonance and remaining in a resonant state longer than any other.

Thanks to the Resonance Clutch Spring, a flexible suspension connecting the two hairsprings with its balance wheels, all of Armin Strom’s Resonance watches are more resistant to shocks or vibrations than standard mechanical movements.

Precision and consistency are, of course, the ultimate goals of mechanical watchmaking and resonance plays a crucial role in helping these amazing watches keep time consistently over days, weeks and months. Armin Strom’s goal is a watch that the owner knows will tell the time consistently, day in and day out.