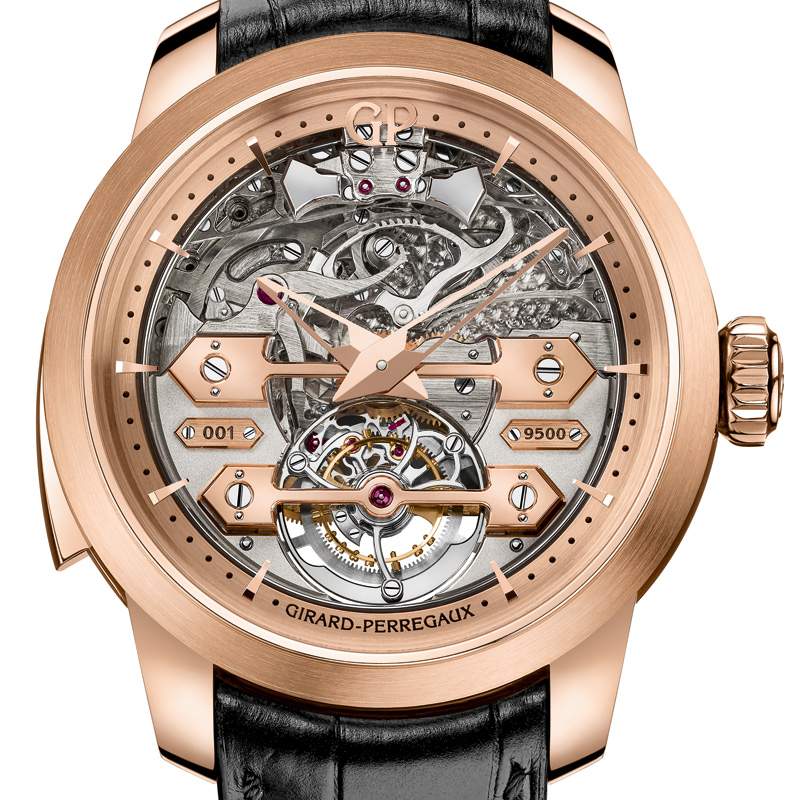 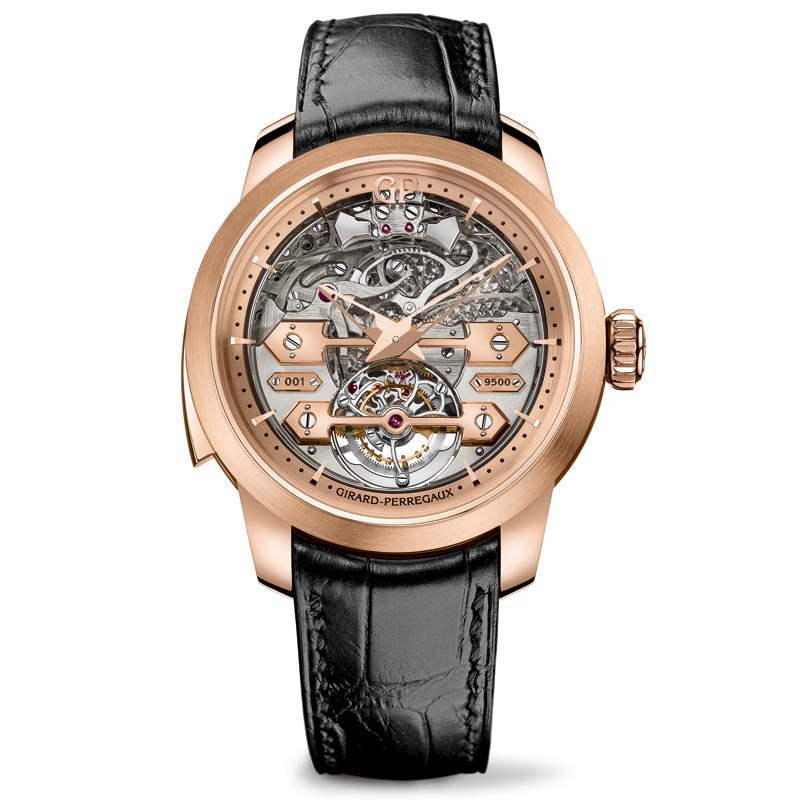 A new approach to the minute repeater

Deeply attached to its origins and to watchmaking traditions since 1791, Girard-Perregaux regularly shows in its watch creations to what extent innovation can contribute to the dynamism of the watch industry. By giving a totally new dimension to the mechanical structure of the striking mechanism, the Minute Repeater Tourbillon with Gold Bridges watch underlines the Swiss Manufacture's constant determination to advance technically while respecting the aesthetic conventions and time-honored expertise that are so close to its heart.

The mechanical structure of this Minute Repeater Tourbillon with Gold Bridges offers an original opportunity to simultaneously observe on the dial side both the components of the striking-mechanism and the hammers that produce its sound by striking the wires of the gongs. In a major innovation, this positioning of the components facilitates optimum sound transmission when the watch is on the wearer's wrist. This underlines a desire not only to create a mechanism that is as attractive as it is efficient, but also to place it clearly on display for the enjoyment of one and all.

Girard-Perregaux took the ambitious decision of asking its teams of watchmakers and engineers to create a brand new type of caliber with a totally original mechanical structure that makes the invisible visible. Underlying this approach is an implicit desire to perpetuate the Firm's expertise and watchmaking tradition, embodied by the Tourbillon with Gold Bridges also found in this model.  This emblem of the Girard-Perregaux brand, the design of which was patented in 1884, is today perceived as the aesthetic, technical and even symbolic essence of one of the most venerable Swiss watch manufactures still in existence.

How to produce a strong, clear sound from a wristwatch equipped with a minute repeater mechanism only often continues to be a stumbling-block for many watchmakers.  Scores, if not hundreds, of different solutions have been proposed in order to perceptibly improve the volume of sound produced by these timepieces, the principle of which first emerged at the turn of the 17th century.  However, Girard-Perregaux purposely chose not to implement any of the previously existing solutions.  None of these succeeds in both beguiling the ear by diffusing a powerful melody and delighting the eye by giving the wearer the opportunity to observe the components of the striking-mechanism during the course of their movements.

With its desire to infuse a spirit of creativity into the notoriously tradition-bound world of watch complications, the Girard-Perregaux Manufacture proposes a classic watch that displays on its front side not only a Tourbillon with Gold Bridges, but also, still on the same side, the majority of the components that enable the minute repeater complication to produce a strong, clear sound, even when in position on the wrist. To achieve such a result, the watchmakers were obliged to re-design not only the entire manual caliber, but also its method of construction and operation.

Giving sound the quality it deserves

The approach adopted here, which is as complex as it is original, perceptibly improves acoustic performance while offering observers the opportunity to appreciate the subtle mechanism of the minute repeater complication not only with their ears but also with their eyes. It should be noted that this is set in motion by sliding a bolt traditionally placed at 8 o'clock on the left-hand side of the case-band.  Sliding this trigger-piece rewinds the spring contained in the minute repeater barrel.  Once the maximum limit has been attained, this minute repeater winding mechanism releases the "on-off" control - an organ designed to prevent the striking-mechanism from starting if the winding of the trigger is not fully completed, thus preventing an incorrect acoustic indication of the time. The enhanced structure that allows the components of the striking-mechanism to be seen through the opening cut into the dial and the astute positioning of the hammers and gongs on the same side, enables the observer to follow the triggering operations with his gaze, while at the same time also watching the hammers strike the gongs. It will be seen that, of all the minute repeater components, the only one that remains both invisible to the eye and almost undetectable by the ear is the complex organ known as the flywheel. Designed to regulate the hammers' striking speed, it operates on the case-back side so as to limit any sound emissions, however feeble they may be, and thus guarantees this watchmaking musical instrument's acoustic qualities.

In these enhanced conditions, the delicate components of the striking-mechanism, each given their own traditional finishing, wind up and then release the hammers so as to strike with absolute consistency first the hours (in a low tone), then the quarter-hours (in a combination of high and low tones), and finally the minutes (in a high tone).

The decision to position the two gongs facing the inner side of the hour circle crafted in 18K gold, and to also place here the hammers (the shape of which is inspired by the Gold Bridges first patented in 1884), goes beyond mere aesthetic considerations.  This positioning enables the acoustic wave, duly regulated at a carefully calibrated frequency, to reverberate harmoniously and not, as is only too often the case, to be confined by the excessive proximity of surfaces such as the skin, well known as possessing a density that easily absorbs sound waves.   In addition to this, the relationship between the size of the case and that of the caliber has been carefully studied so as to offer the best possible volumetric arrangement, as in the case of musical string instruments. Even better, the inside of the case has been specially crafted and finished so as to limit any acoustic interference that might arise.  And since there is no room for false notes in a musical performance, the sapphire crystal case-back has been crafted to give it the delicate curvature found in the majority of musical instruments equipped with a sounding-box, and the aim of which is to maximize the volume in which the sound can reverberate.

Half musical instrument, half kinetic sculpture

It is the highly unusual structure of the striking-mechanism, together with the adoption of a number of subtle technical solutions for this complication that has allowed the Minute Repeater Tourbillon with Gold Bridges to perform so exceptionally well.   Thus, in order to enhance the transmission of the sound wave between the heels of the two gongs, the link between the main plate and the 18K pink gold case-band has been stiffened. This is not all, however. To increase the speed of the hammers and consequently their striking impact, they are each mounted on a pair of jewels acting as ball-bearings so as to reduce friction.  The design of this structure has such a harmonious visual impact that it may seem simple.

However things that look easy are in fact often exceedingly complex to achieve. No fewer than 270 hours of painstaking labour by a master watchmaker are required to assemble and adjust this magnificent mechanism. This work is made all the more arduous by the fact that the method of production of the minute repeater complication, with its hammers placed on the same plane as the racks used to wind them up prior to striking, makes it necessary to adjust the hammers outside the movement using a special tool simulating their future position.  Nevertheless the final result is there for all to see, and these small components made from black polished tempered steel and beveled to highlight their original design inspired by the watch's three gold bridges, produce thanks to their high degree of inertia a clear, powerful note at each strike.

A mechanical structure inspired by the Girard-Perregaux tradition

To house this exceptional mechanism, Girard-Perregaux has chosen a round case with a domed case-band prolonged by the slender lugs that are characteristic of models in the Haute Horlogerie collections.  Its gently inclined bezel allows for a wide opening out over the movement and facilitates the captivating spectacle of the minute repeater mechanism, of the hammers, gongs and Tourbillon. The emblematic arrow-shaped gold Girard-Perregaux Bridges and marking-plates identify the pedigree of this mechanism, with its irreproachable finishes, crafted in accordance with the long traditions of the Manufacture. The caliber is also revealed on the case-back side with a third Gold Bridge and the Girard-Perregaux logo engraved on the main plate.

A black alligator strap with a pink gold triple folding clasp adds the finishing touch to this timepiece.