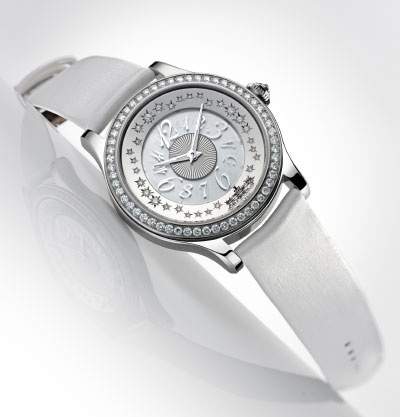 Boasting an ingenious system of discs that keeps its dial in a permanent whirl of exhilaration, the

Master Spinning is the sort of watch that turns heads. This latest incarnation of the Master line has a

round, generously proportioned case which is lit up by the sparkling presence of diamonds. It also

has a self-winding Jaeger-LeCoultre calibre, which has all the legendary qualities of robustness, water

resistance and reliability that characterise the Manufacture's movements. Both precision timepiece

and splendid jewel, this is a watch born to a very special destiny.

The Master Spinning is a watch with a big, bold personality. It burns with the flame-like passion of the

baguette-cut diamonds that sketch a vivid circle of light around its dial. All of the jeweller's and designer's

combination of fixed and moving elements into a single spectacular display under the watch glass. The

dynamic of tableaux is provided by the floral figures. The whole scene shines with the glamour of

precious stones. One disc bears a row of baguette-cut diamonds which wheel about in a magical circle

of light, tracing a sparkling, dancing shadow in their wake as they seek an equilibrium that is only to be

found in the never-ending whirl of perpetual motion.

Imitating the internal impulses driving forward the watch's movement within, each motion of the

wearer's wrist spins the magic circle of diamonds, the floral decorations which embellish the dial's

perimeter and the central rayonnant motif. The traditional art of the jeweller has been exploited to

apart again in an allegory of hope and waiting. Here, sparkling time is transformed into a playful

representation of a joyous, perpetual chase, conducted to the rhythm of its wearer's elegant hand

elegance of white gold, the Master Spinning is a watch that turns heads in a dazzling celebration of