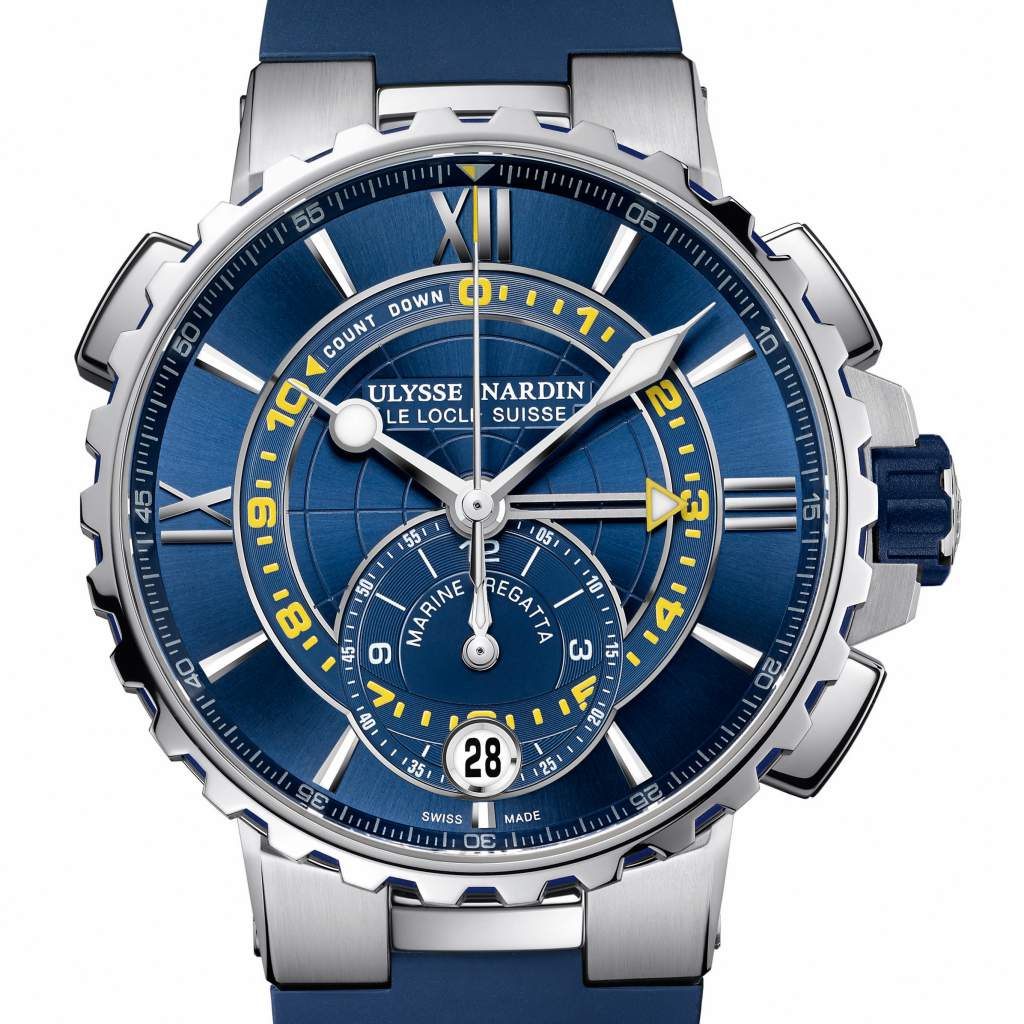 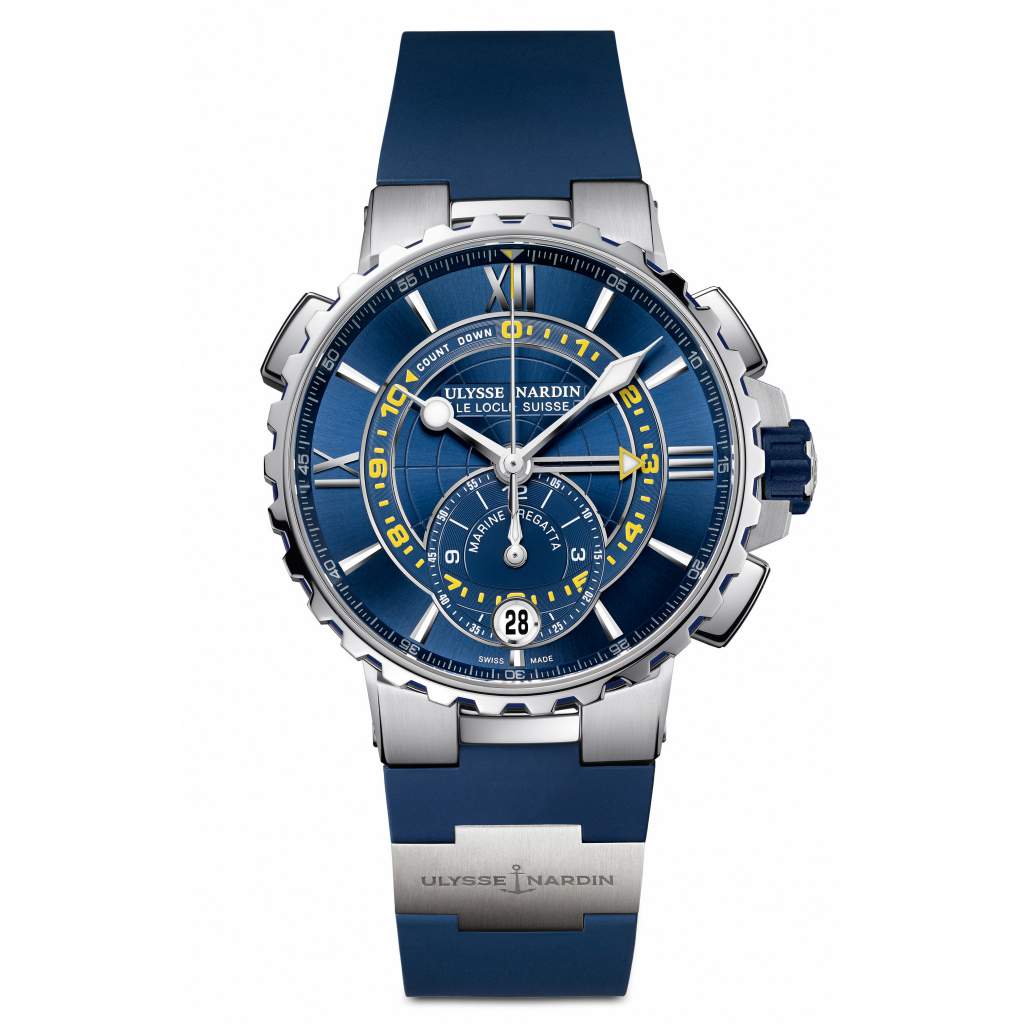 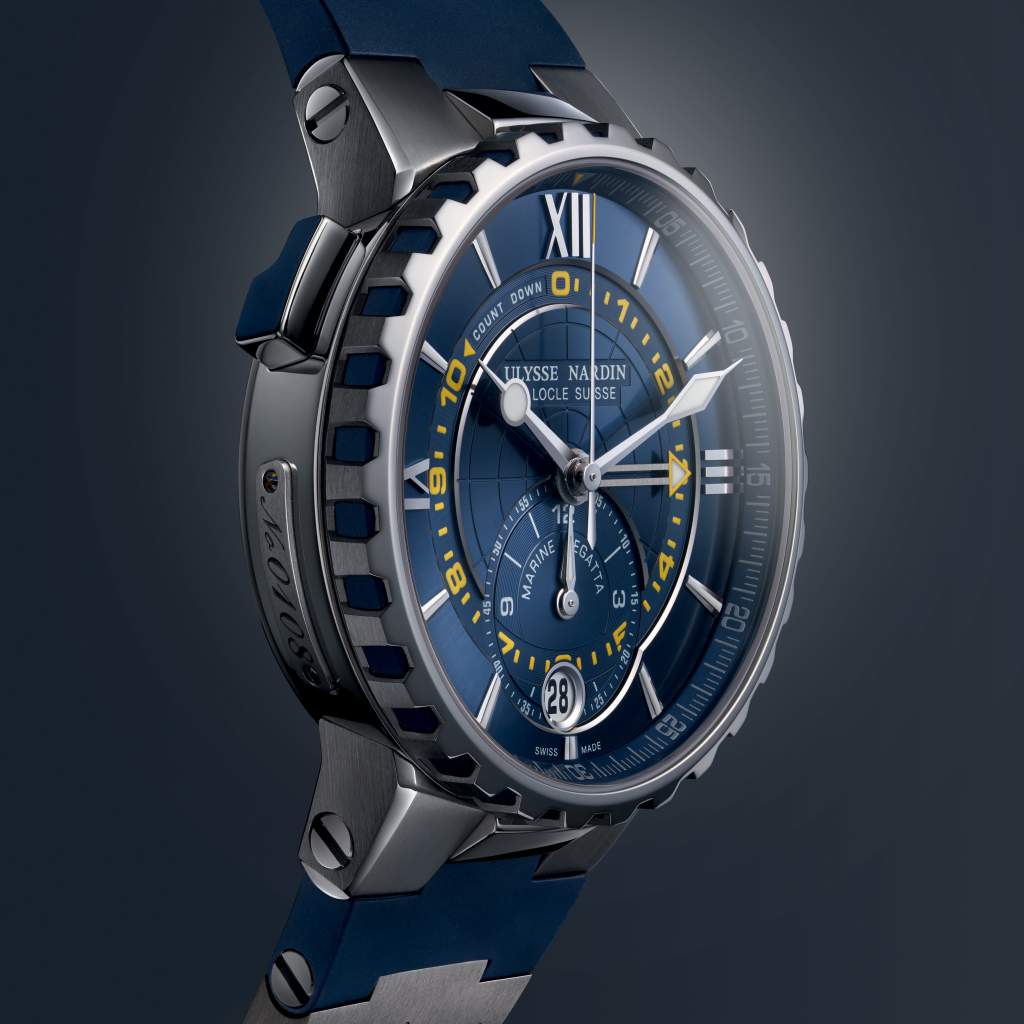 Getting off to a good start. This is precisely the purpose of this groundbreaking regatta chronograph with a patent to prove it equipped with a sweep countdown timer that can be set from 1 to 10 minutes. Victory comes down to those crucial minutes before the starting gun goes off while maneuvering to cross starting line with optimal positioning and perfect timing. Following the countdown, the bi-directional seconds hand starts moving in a clockwise direction and begins timing the race. Clear, intuitive and accurate functionality from Ulysse Nardin, with the support of Artemis Racing, the company’s official part-ner for the 35th America's Cup.

Since 1846, Ulysse Nardin has been forging ahead with its sights set firmly on new horizons of creativity, ingenui-ty and precision. With this new regatta chronograph, created in partnership with the Swedish Artemis Racing team, the Le Locle watchmaker has again demonstrated its technical expertise and pioneering spirit. An innova-tive movement, crafted in-house, includes an original and intuitive bi-directional countdown timer for which a pa-tent has been filed. In its sturdy case, this timepiece give fresh impetus to the fleet of regatta watches. A practical and reliable timepiece, able to withstand the grueling conditions of the America’s Cup.

The purpose of a regatta chronograph is not only to track racing time but, above all, to count down the critical minutes before the racers cross the starting line. The “Fleet Race”, which takes place on a course marked by buoys, begins with a five, seven or ten-minute countdown at the end of which the yachts begin sailing the course. During this decisive interval of time, the competitors strategically array themselves on the startling line – based on winds and, most importantly, keeping clear of other competitors – in order to cross the line as close as possible to the starting signal. A good start determines the success in this test of skill, tactics and technical expertise. The new Ulysse Nardin Regatta chronograph delivers groundbreaking functionality and intuitive tracking of these cru-cial minutes. Dedicated to top-level sailing, this watch has been developed with the expert advice of famous yachtsmen Loïck Peyron and Iain Percy, both brand ambassadors and members of the Artemis Racing team.

Treasure in the hull

A heavy stainless steel case. The Ulysse Nardin Regatta timepiece demonstrates its stylistic power to better re-veal the complexity of the in-house crafted drive it contains. 650 artfully arranged components shape the originali-ty and special attributes of this regatta chronograph, engineered with an ingenious two-way count-up/count-down system. Innovative in more ways than one, the regatta feature, located at the center of the dial, displays the countdown with an arrow pointing at the yellow minute scale from 0 to 10. Easily readable, this hand can be set with a pusher located at the 10 o’clock position and moves in a counterclockwise direction when when the count-down starts. At the same time, the two-way seconds hand of the chronograph ticks away the seconds – in a coun-terclockwise direction – until the countdown comes to an end. When the countdown reaches zero signaling the start of the race, the seconds hand instantly starts moving in the clockwise direction and begins timing the race, measured by an hours and minutes subdial at the 6 o’clock position. Easy to read and precise, designed for those moments during the regatta when each second counts and competitors jump into action.

Like the racers who study the body of water they are to sail, the winds and the effects of currents in advance, the kinematics have been carefully designed beforehand to ensure precision and reliability. By combining complex functions, this sophisticated mechanism has an inverter which enables the central seconds hand to turn in either direction (counterclockwise and clockwise) to track the countdown and then the race time with no further user ac-tion required apart from activating the countdown. The result of many months of development – based on the re-nowned manufacture chronograph caliber UN-153, the new caliber UN-155 features performance, ease of use and perfectly designed display brightness. The ample 3-day power reserve, the two-way seconds hand that can be stopped to adjust the hour and the bi-directional date change compliment its remarkable practicality.

Power and refinement on the starboard bow

With its distinctive appearance, the Regatta timepiece recalls the nautical roots of the company. Its heavy 44 mm diameter steel case, water-resistant to 100 meters, is completed by a fluted bezel with rubber inserts, a screw-down crown and two molded rubber pushers. Its faceted lugs perfectly integrate the rubber strap featuring titani-um inserts and folding buckle. Turning to the dial, two variations are offered: the first features an ocean blue with bursts of signature Artemis Racing yellow and the second vivid sea foam. Both have a yellow countdown register punctuated by a sweep hand, Arabic numerals, indexes, appliqué Roman numerals glided over central lumines-cent hands, a yellow-tipped seconds hand and 12-hour and 60-minute subdial with the date displayed in a round aperture at the 6 o’clock position. As a tribute to its partnership with Artemis Racing for the 35th America's Cup, Ulysse Nardin has also created a limited edition of 35 watches. Featuring a black enamel Champlevé dial, this model’s countdown feature appears on the bezel in yellow and anthracite gray, the colors of the Swedish team.