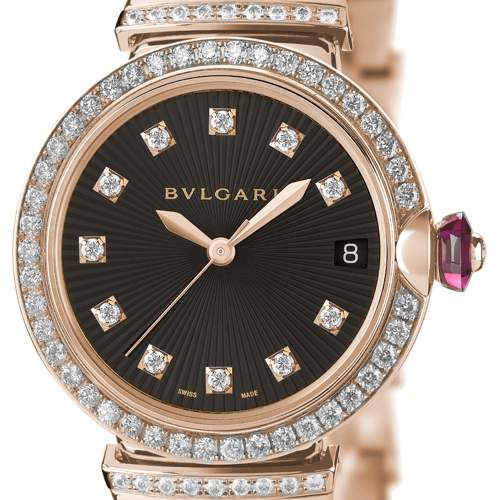 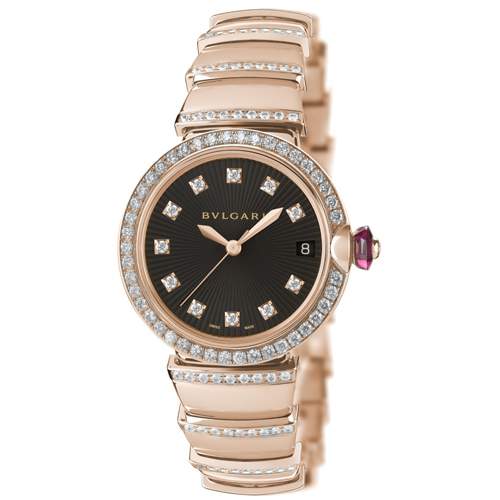 Infusing time with light, LVCEA is the new star of the Bulgari Watches Collection


Bulgari captures the power of luminosity in LVCE A, a new timepiece for women. In tribute to the sundial, LVCEA winds history with modernity, clasping function to design. A rounded case, its lithe foundation, and a spectrum of shades and styles make LVCE A as luminously feminine as it is unmistakable.

Since the dawn of humankind, light has been the marker of time. To count the passage of hours, primeval man invented the sundial. Timekeeping instruments, such as the solar quadrants that formed the sundial, were first unearthed in Ancient Egypt, later in Ancient Greece and Rome. The sundial is forever wound with astronomy and the calendar, and this original form of timekeeping became indispensable – the predecessor to today’s precision. Light is fundamental to our very biological rhythms, and wholly inextricable from time. Thus light inspired LVCEA’s essence, recounting the legend of the sundial.

LVCEA pays homage to the rich history that brought Bulgari to light – rooted in Ancient Roman and Greek tradition. Enlightened by such a past, Bulgari linked luce, the Italian for “light,” with lux in Latin to name its LVCEA Collection.

Throughout the centuries, light has also held powers in life and love. From simple photosynthesis, to the Bible story of Creation separating light from dark, to radiant Juliet, “the sun” to her Romeo…light symbolises rebirth, reinvention, planetary revolution. Thus a celestial inspiration orbits LVCEA, reflecting the brilliance of the sun, moon, of Bulgari.

Rounded, as a halo of light, LVCEA’s gleaming case encircles the passage of time. The symbol of unity, the case’s circle draws the unending connection between past and present. Classic aesthetic yields contemporary chic – timeless LVCEA reveres today’s Bulgari goddess.

Bulgari, renowned for exquisite jewellery making, sets a lucent gemstone into the crown of every LVCEA creation. Of cabochon cut in noble purple, this twist on winding a watch adds the classic dash of Bulgari audacity. Atop the crown sits an exquisite diamond, a sparkling reminder of the spiritual beauty of woman.

Not to be outshone, LVCEA’s gleaming band takes inspiration from an iconic Bulgari collection, the Serpenti. The sleek scales of the bracelet coil into an architectural geometry of polished metals. Each moment in time is inextricably connected to the next, as each link of the band melds in a seamless conjugation of unity. With Bulgari’s trademark sense of volume, the powerful lines of the band balance the voluptuously round case. These opposites are thus reconciled in a harmonic combination of circle and line, resonating the fascinating complexity of contemporary woman – the face of strength, grace, sensuality and power.

The versatility that defines LVCEA makes it the accessory for all occasions. Unique for its day-to-night wearability, the watch’s design relies heavily on functionality. Touting pristine performance for which the Bulgari Watchmaking Atelier is known, perfect time is kept unchangingly.

With an extensive collection of 12 different styles, LVCEA ranges from a classic steel version, to a rich marriage of steel and pink gold, to the luxury of pink gold and pavé diamonds. Various models flourish their preciousness with diamonds to sparkle on every hour, or with the glow of mother of pearl. Others give centre arena to Ancient Rome, with sundial Roman numerals XII and VI to mark the time.

This dense range of new creations on a single theme pays a strong tribute to the subtle and rich female personality. As a mirror, LVCEA expresses feminity but being strong, and addresses to a charismatic woman whose personality is uncommon. Opting for LVCEA relates to a very personal choice aiming to express authenticity, thanks to the contrast of the shapes, with a sober round case allied to an architectural bracelet.

Bulgari, expert of high jewellery, is master of exquisite luxury. Able to capture an idea or an aura, to recreate it into something that can be touched, caressed, cherished: this is the Bulgari magic. Meanwhile, its multifaceted designs celebrate past and present, strong and sensual, practical and precious. The dawning of this new aura is radiant indeed: LVCEA unearthed, the luminous gem of the Bulgari Watches Collection.