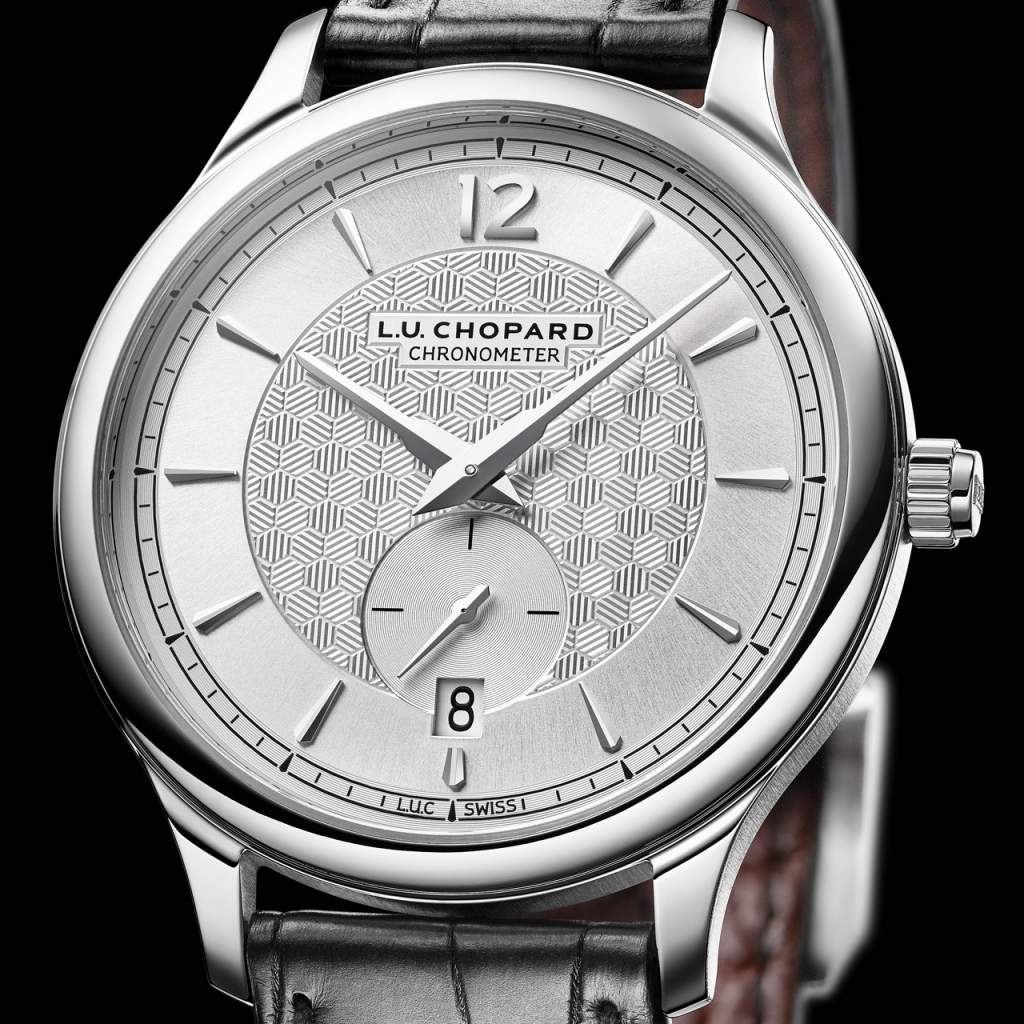 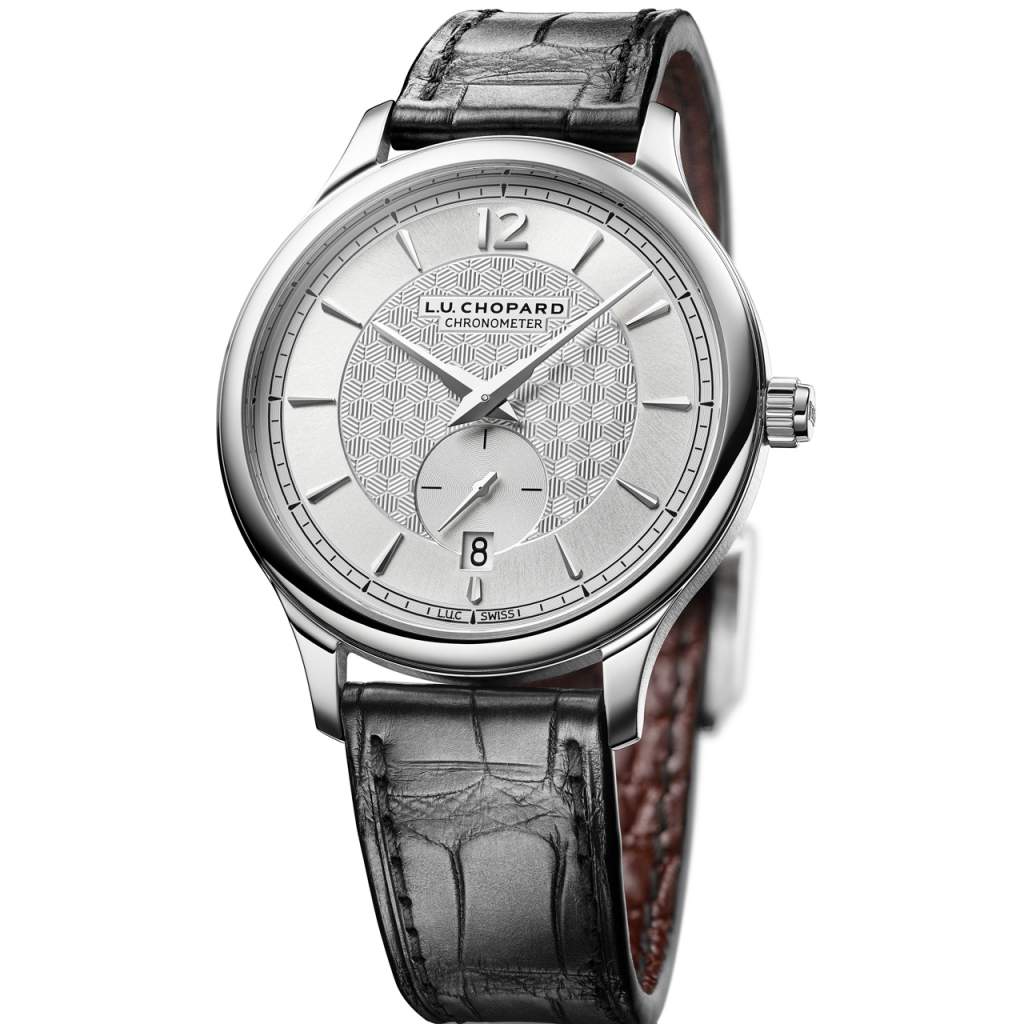 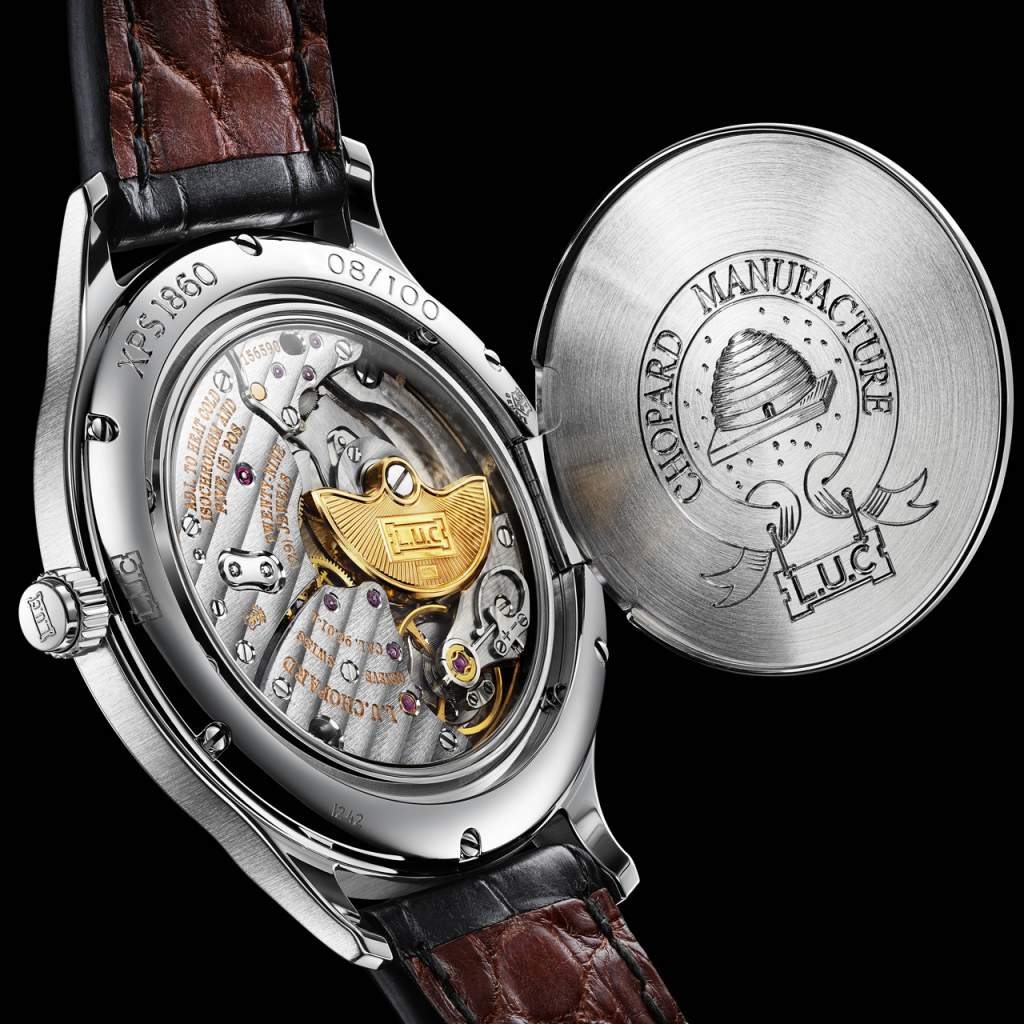 The new L.U.C XPS 1860 Officer harbours a wealth of secrets and symbols. On one side, an exceptionally refined hand-guilloché dial. On the other, an equally guilloché officer-type back cover that opens to reveal the ultra-thin L.U.C 96.01-L movement. The L.U.C XPS 1860 Officer epitomises the elegance and fine craftsmanship of Chopard Haute Horlogerie. Attired in white gold, this elegant timepiece bearing both COSC and “Poinçon de Genève” certifications adorns the wrist with a blend of distinction and discretion.

The ultimate token of style for a gentleman lies in a subtle blend of delicacy, secrecy and mystery. Reflecting this inherent modesty, the spirit of L.U.C XPS watches has always been imbued with a sense of discretion and refinement. With its guilloché dial, its hinged officer-type back cover, the new L.U.C XPS 1860 Officer remains entirely true to this chosen path. The honeycomb motif appearing on the outside of the back cover matches that of the dial, naturally catching the light and capturing the gaze. Only a closer look reveals the true nature of the L.U.C XPS 1860 Officer, when the wearer presses the crown to open the back cover concealing its sapphire crystal case-back. Its hinge enables it to open at a precise 90° angle and to hold that position. Refinement is a private matter, which is why the L.U.C XPS 1860 Officer is intended for men of good taste.

Officer-type back covers served to protect pocket watch glasses, as well as providing space for unique and personalised engravings. With the transition to the wrist, the watch industry no longer had any real need for these precious ‘bonnets’ concealing the ‘engine’, yet the sense of artistry and ritual remained.

The dial of the L.U.C XPS 1860 Officer is in solid gold. Its outer section is sunburst satin-brushed and the small seconds is finely grooved. A hand-guilloché honeycomb motif adorns the central part, a motif appearing in an enlarged version on the outside of the back cover. This design carved out of the material refers to two key landmarks in the history of Chopard.

The first marks the creation of the first watch made by Chopard Manufacture, the L.U.C 1860, launched in 1996 and graced with a central hand-guilloché motif. The second dates back to the founding of the Maison by Louis-Ulysse Chopard. Since its creation, and until the 1920s, the brand laid claim to the symbolism represented by bees. Chopard watches were all engraved, both on their movements and inside their covers, with a beehive surrounded by bees. When Chopard Manufacture was created in 1996, Karl-Friedrich Scheufele choose to reprise this image by associating it with certain models of the L.U.C collection, thus named in tribute to the company founder.

The inside of the back cover protecting the L.U.C XPS 1860 Officer picks up the hand-engraving of the beehive and bees, with the latter appearing in a random manner that ensures each model is truly unique.

The ornamental appeal of these various engravings is underpinned by references to the nature of bees: industrious, honest and modest, all essential contributors to an overall achievement that holds together through cooperation and hard work. The elegance of the L.U.C XPS 1860 Officer, its perfectly balanced and timeless proportions, the quality of its craftsmanship confirmed by the “Poincon de Genève” quality hallmark, all echo the ethical approach that guided its creation.

The horological excellence of Chopard Manufacture

A single press on the crown-integrated pusher of the L.U.C XPS 1860 Officer is enough to open the hinged back cover, as a pleasing prelude to a fascinating discovery. This slender ‘shield’ barely changes the volume of the watch which remains a mere 7.7 mm thick, nor its feel on the wrist. It merely serves to conceal – inside the 18-carat white gold case with its vertical satin-brushed flanks – the ultra-slim L.U.C 96.01-L calibre, finished according to the highest standards of Chopard Manufacture.

The L.U.C XPS 1860 Officer proudly bears the “Poinçon de Genève” quality hallmark. This aesthetic and technical certification is approved by an independent authority and governed by a law promulgated by the Canton of Geneva, dictating the conditions of peerless excellence. These criteria apply to the case and the movement, including structural elements, precision and the omnipresence of superlative surface finishing.

The automatic winding of L.U.C Calibre 96.01-L is handled by an engraved micro-rotor in 22-carat gold, whose high inertia optimises its efficiency. It supplies two barrels stacked in accordance with Chopard’s patented Twin® technology and guaranteeing a 65-hour power reserve. They enable the movement to beat with chronometer-certified precision. This level of quality corresponds to a personal requirement laid down by Chopard co-president, Karl-Friedrich Sscheufele. He is especially attached to ensuring the chronometer-worthy precision of all L.U.C models with a small seconds display and which are all certified by the Swiss Chronometer Testing Institute (COSC).