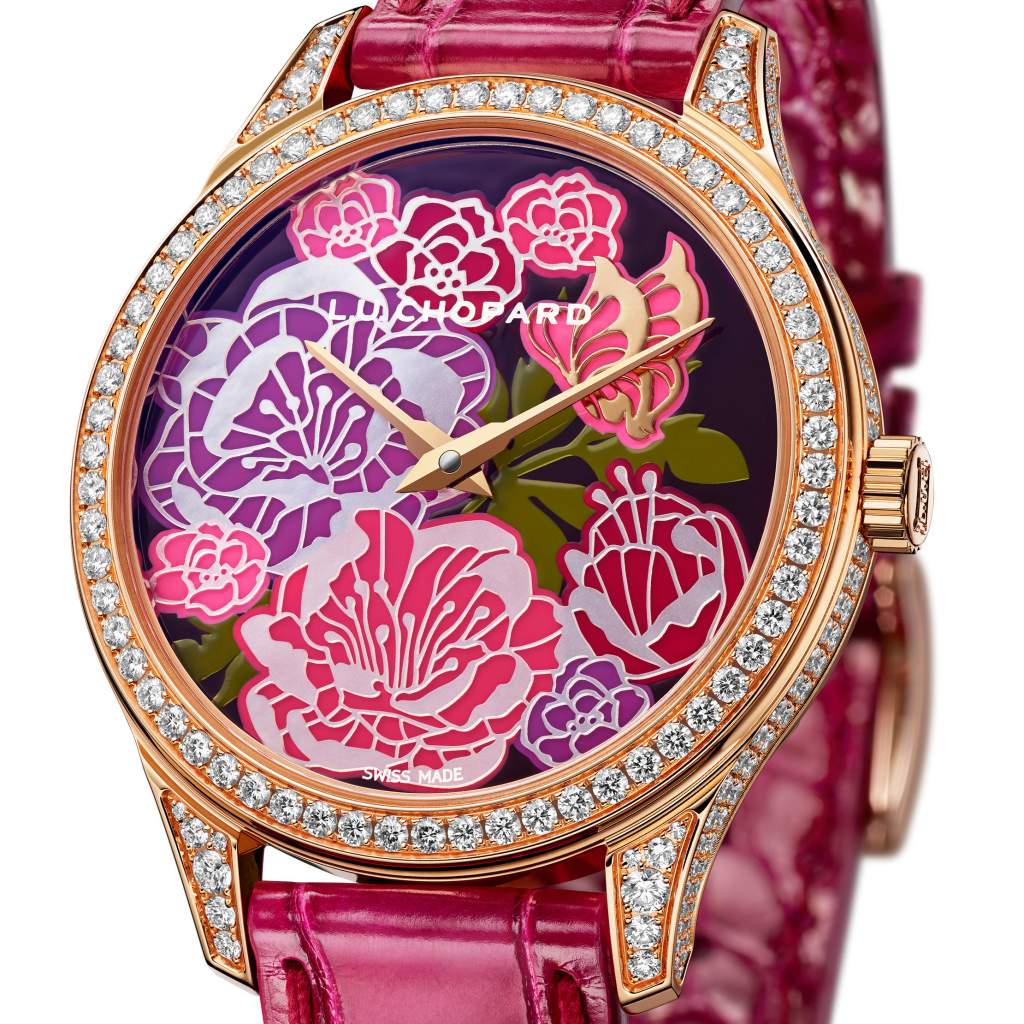 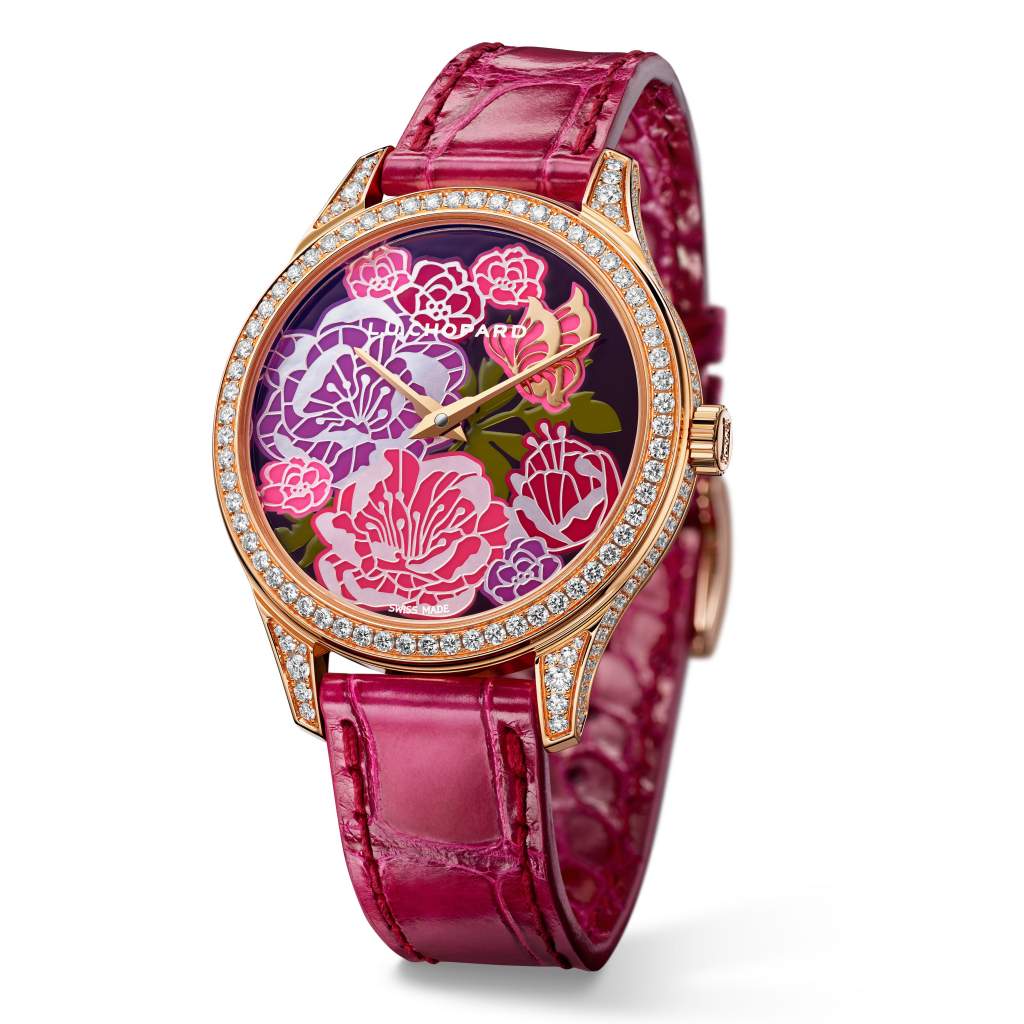 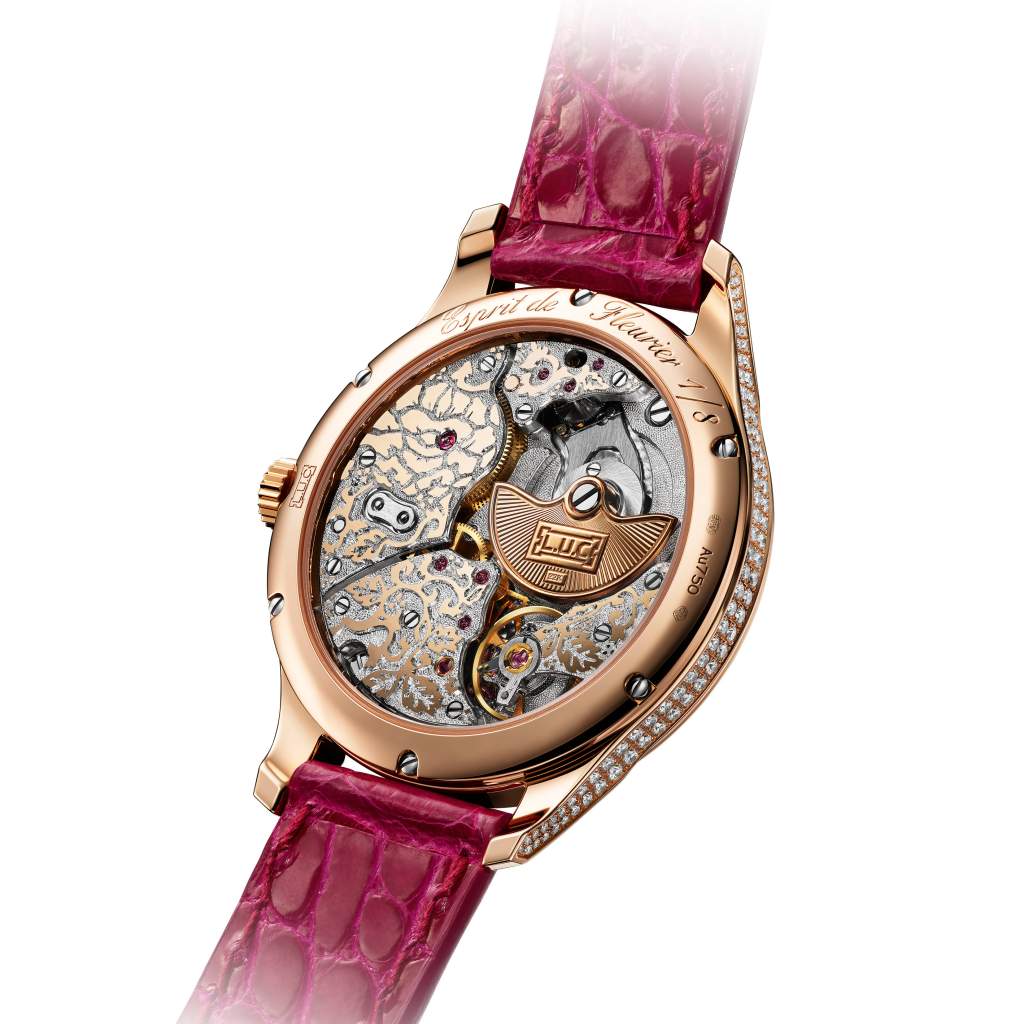 Each year, like a precious rendezvous with beauty-loving collectors, Chopard creates a timepiece whose muse is the peony: L.U.C XP Esprit by Fleurier Peony. For this new eight-piece limited edition, the Maison called on its Mains d’art (artistic hands). The dial is a dazzling combination of crafts such as gold engraving, transfer printing and mother-of-pearl cutting; while its movement – the L.U.C Calibre 96.23-L designed and produced by Chopard Manufacture – is entirely decorated with floral engraving, a now rare art that is perfectly mastered by Chopard artisans.

On the purple dial of the L.U.C XP Esprit de Fleurier Peony watch, eight peonies in pink monochrome shades reveal their fragile beauty. Featuring generous petals highlighted with white mother-of-pearl, they are like a silent burst of magnificence. There is no daintier, more symbolic flower than a peony that blooms in May. It has the elegance to bloom when spring arrives and to vanish before summer, making itself all the more desirable by leaving us only one month to enjoy its beauty. The L.U.C XP Esprit de Fleurier Peony timepiece is an ode to the ephemeral. It was up to Chopard, the Artisan of Emotions, to reproduce all its subtle charms.

A favourite flower of Chopard co-president Caroline Scheufele, the peony is also one of the most popular flowers in China, where its presence dates back to the 9th century BC. Cherished by painters and sung by poets, the peony was considered as the queen of flowers, an emblem of wealth and honour, which is symbolised when portrayed in a painting. It was also associated with the imperial family. During the Tang dynasty (618 - 907), peonies flourished in the palace gardens. Legend has it that the Empress Wu Zetian (624-705) was walking in the Imperial Garden of Chang'an, then capital of the Tang Empire, when she saw the garden looking very bare and ordered all the flowers to open up to greet her the very next day. The lilies answered the call, as did the honeysuckle and jasmine. All the flowers obeyed the Empress, except the peonies, which never bloom on demand. Humiliated, the Empress drove them out of her garden for offending their sovereign and exiled them to Luoyang, where it is said that the most beautiful peonies in the world are grown.

This incomparably beautiful bloom is a motif that the Manufacture honours year after year, interpreting the delicate flower in various ways by adopting a 35 mm-diameter ladies’ L.U.C XP watch for women as a medium of expression. This is a perfect opportunity for the Manufacture to highlight all the crafts that are mastered in its workshops and one, as ephemeral as the blooming of a peony, that collectors will not want to miss.

A bouquet in subtle shades of pink

On the dial side, the bouquet of peonies stands out against the purple dial. The palette of colours of this miniature garden is as voluptuous as the flowers that the artisan has brought to life on the dial. A camaieu painting of pink hues, ranging from the palest to the darkest and even verging on purple, contrasts with the tender green of the leaves. The customary shading is replaced by light, since in order to render the depth of the petals, Chopard's Mains d'art (artistic hands), did not shade the flowers, but instead highlighted their details thanks to skilfully hand-cut white mother-of-pearl appliques. A mother-of-pearl made from the most beautiful shells as Chopard selects only the best quality mother-of-pearl. An 18-carat rose gold butterfly cannot resist the call and is about to land on the heart of a flower. The dial of the L.U.C XP Esprit de Fleurier Peony watch is an invitation to engage in contemplation.

All the delicacy of Fleurisanne engraving

The movement side reveals the L.U.C Calibre 96.-23-L, entirely hand-engraved using the delicate art of Fleurisanne engraving. This decorative technique enjoyed its heyday in the 19th century, when artisans expressed their dedication to perfection by engraving movements with dainty scrolling patterns and floral motifs. The Maison Chopard consequently decided to restore the noble reputation of this patient and accurate art form.

Discovering the engraved movement of an 1870 carriage watch inspired Chopard co-president Karl-Friedrich Scheufele to revive a rare craft and convinced him to engrave some of the L.U.C. movements in the Fleurier style. In the decoration workshops, a woman with truly golden hands offered to teach herself this subtle art, which she now masters perfectly. It is to her that we owe the delicate engraved peonies adorning the movement of this new L.U.C XP Esprit de Fleurier Peony timepiece.

The artist first drew the motif freehand on the movement bridges, subsequently marking it with an engraving tip, before patiently removing the material surrounding it, making the peonies appear, like precious sculptures, in bas-relief. Their delicate petals seem ready to quiver at the slightest breath of wind. But the picture could not be complete without the profuse foliage that casually teases the beautiful symmetry of the flowers. The background is then finely chased, dot by dot, and the floral motifs are polished. This contrast between the matt material and the brilliant motifs brings the calibre to life and embellishes time. Once the engraving is finished, the movement is rhodium-plated, giving birth to a two-tone work imbued with distinctive elegance.

The diamonds set on the bezel and case middle set the crowning touch to this miniature work of art and highlight the work of each craftsman. This timepiece is an alliance of crafts, from the master watchmaker to gemsetters and jewellers, right the way through to the artist who engraves the movement, the painter who creates the miniatures by hand, and all the craftspeople who decorate and polish down to the smallest screw, the tiniest apparently insignificant detail. In this exceptional piece, we sense the soul of all the artisans who have toiled to create a work of art that reflects, and enhances, the perfect beauty of nature around us.

And because beauty and perfection are also a matter of time, it takes several weeks of work for Chopard's craftsmen to paint, engrave and decorate each timepiece. This exceptional watch is issued in an eight-piece limited edition and will be sold exclusively in Chopard boutiques.

Chopard is a family Maison with a strongly ingrained philosophy of independence. The steps involved in making L.U.C watches are all performed at the Maison’s Geneva and Fleurier production sites. Movement development, finished product design, gold smelting, case stamping and machining, calibre components, traditional hand-crafted finishes, surface treatments, polishing, assembly, adjustments and quality controls: Chopard masters the full range of watch production operations and applies them to each and every L.U.C watch.

The new L.U.C. XP Esprit de Fleurier Peony has taken this exceptional path, notably leading it to be powered by the L.U.C Calibre 96-23-L equipped with patented Twin technology, meaning two stacked coaxial barrels delivering a 65-hour power reserve. Housing such a self-winding movement within an ultra-thin 7.50 mm case is a true feat. It was made possible by an ingenious construction with a micro-rotor that may be admired through the exhibition back of this fascinating timepiece issued in 18-carat rose gold. The fruit of meticulous craftsmanship, these exquisite watches echo the aspirations of the most discerning aesthetes and express a clever blend of artisanal savoir faire, distinction and emotions.