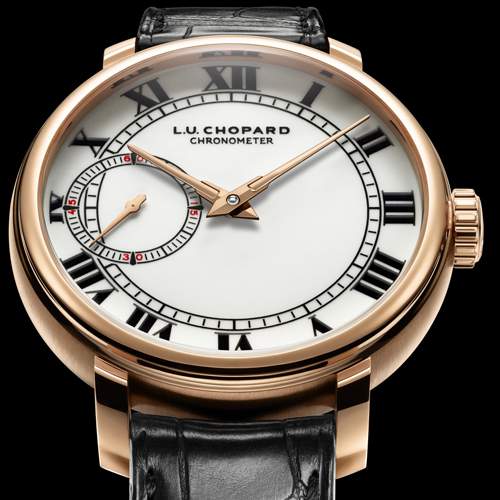 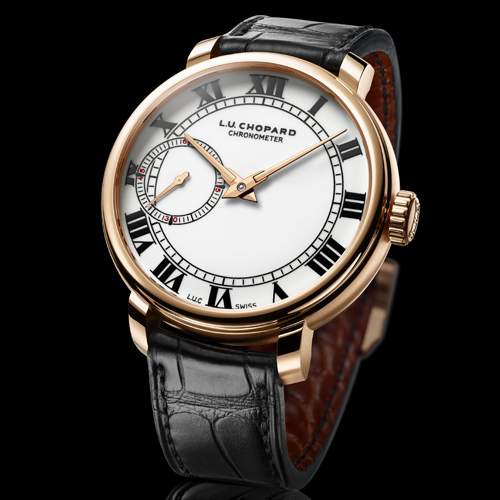 With its blend of elegance, precision and aesthetic purity, the L.U.C 1963 is a natural descendant of the great historical chronometers. It brings the watch back to the fundamentals of its vocation: namely to provide the clearest, most accurate and most appealing display of time. Featuring a shape dictated by a hand-wound movement bearing the Poinçon de Genève quality hallmark, its dial occupies almost the entire diameter of its generously sized rose gold case. 2014 marks 50 years of the Scheufele family at the helm of Chopard. This 50th anniversary is being celebrated in due style by a watch with a powerful presence distinguished by a classic aesthetic appearance underwritten by the finest modern technical expertise.

The Swiss chronometers of yesteryear embodied watchmaking’s quest for progress and precision. While these large-sized pocket-watch models were essentially dedicated to the cause of rating regularity, they forged in parallel a pure, uncluttered aesthetic that became a benchmark.  The L.U.C 1963 echoes this two-fold tradition. A wristwatch equipped with a pocket-watch movement, it is a direct descendant of the chronometers that Chopard was still producing in 1963, the year the Scheufele family acquired the Geneva-based company. Karl-Friedrich Scheufele, Co-President of Chopard, explains the approach behind this model: “We had a very classical approach, reminiscent of the watches that my father used to make just after the takeover: models with white dials and black Roman numerals. Such was the classic aesthetic of the era and which my father deliberately cultivated.”

The L.U.C 1963 is an Haute Horlogerie creation endowed with powerful emotional content. It pays tribute to the proud tradition of fine watchmaking that represents Chopard’s aesthetic and technical roots, as well as to the spirit of high-precision timing or ‘chronometry’ to which the company remains firmly committed. Chopard indeed submits many of its models to the certification process conducted by the COSC (Swiss Official Chronometer Testing Institute) and is also a significant beneficiary of the prestigious Poinçon de Genève quality hallmark. The L.U.C 1963 carries both certifications, each bearing independent witness to the superlative quality characterising the production emerging from the workshops of the Chopard Manufacture.

The case of the L.U.C 1963 strikes a perfect balance between elegance and opulent sizing. Jutting slightly out from the 44 mm-diameter case, the lugs gently mould the curve of the wrist. The sides of the 18-carat rose gold case are cambered and brushed, while the slender rounded bezel is polished. The pure, translucent porcelain-style white dial bears a small seconds subdial at 9 o’clock, dauphine hands, black Roman numerals and a rail track minute circle – all representing direct references to the golden era of chronometers. Nonetheless, each of these elements has been reworked. The small seconds subtly overlaps the minute track and bears red Arabic numerals ensuring a lively yet discreet presence. The design of the dauphine hands are typical of the new L.U.C collections. The Roman numerals follow the round shape of the dial and feature alternating solid and slender bars, while the minute track is composed of uninterrupted black ‘rails’ with ‘sleepers’ that never touch and thus create a lighter effect on this key structural element within the L.U.C 1963 aesthetic. Nonetheless, the most striking feature of this dial is undoubtedly its size, since it occupies almost the entire diameter of the watch. This substantial opening of 36.7 mm is a direct consequence of the presence of the L.U.C Calibre 63.01-L.

The mechanical hand-wound L.U.C 63.01-L movement is a smaller version of L.U.C Calibre 06.01-L. The latter was developed in partnership with the Geneva Watchmaking School and presented in 2010 to mark Chopard’s 150th anniversary as part of the L.U.C Louis-Ulysse Chopard – The Tribute model. L.U.C Calibre 63.01-L with its 38 mm diameter is a large movement, yet with a simple architecture dictated by the absence of any horological complications. In keeping with the chronometer spirit, L.U.C 1963 only displays the hours, minutes and seconds. The movement’s two-tone treatment creates an eye-catching effect, while the alternation between the rose gold shade and the colour of steel heightens the contrasts, enhances the movement’s three-dimensional nature, as well as admirably highlighting the tightly spaced circular-graining on the main plate, the lower gilded part of the movement, and the bridges appearing just beneath the sapphire crystal case-back. These bridges are made of nickel silver, a nobler alloy than brass and a much harder and more difficult metal to work with because its scratches cannot be redeemed. These choices of material are not governed by aesthetic considerations alone: they also prove highly effective in technical terms. The ample curve of the swan’s-neck index-assembly is thus not merely beautiful, but also enables fine and firm adjustment of the watch’s rating.

Chopard fashions all its L.U.C calibres in harmony with the finest horological traditions. In this respect, the finishing of its movements is considered to be just as essential as their mechanical construction. Circular-graining, chamfering, Côtes de Genève and polishing are extensively employed and all hand-crafted in the Chopard Manufacture workshops. They endow the L.U.C 1963 with a noble pedigree that is granted by the prestigious Poinçon de Genève – a hallmark awarded only to watches displaying the highest degree of aesthetic and mechanical quality. The L.U.C 1963 is in a league of its own within the L.U.C collections in terms of both its nature and its spirit. In keeping with this rare and exclusive nature, only 50 of this model will be produced, all clearly destined for devotees of classical Fine Watchmaking.