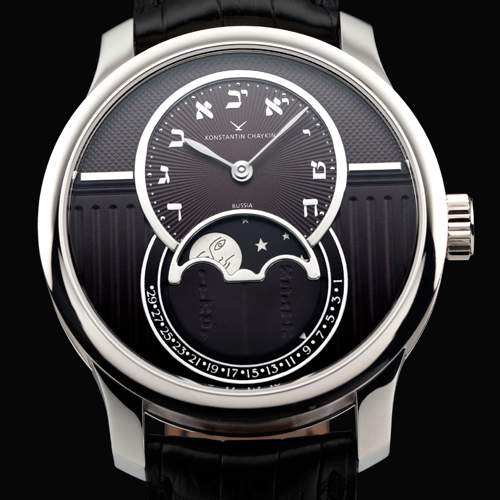 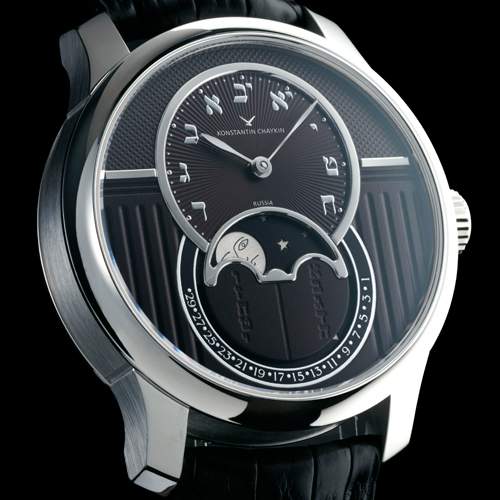 The Decalogue Luah Shana Watch is Hebrew in both design and in how time is indicated. The hands move from right to left, a reminder of how time was indicated on the famous tower clock on the Old Town Hall in the Josefov, the old Jewish quarter of Prague. The Decalogue Luah Shana also uses Hebrew letters instead of numerals on the dial, which are read right to left as well.

The artists who designed the Decalogue Luah Shana Watch turned to classic Hebrew artwork and design elements for inspiration. There are columns on the dial which represent the famous columns of the First Temple, the Temple of Solomon. These majestic columns are described in the Tanakh by Melachem. King Solomon had two copper columns placed on either side of the main entrance of the Temple. Both were 9 meters tall: the right (south) column was named Jachin (‘He confirms’ in ancient Hebrew) and the left one (north side) was named Boaz (“The strength is in Him”). The columns were cast by master Hiram from Tyre.

The large lunar phase indicator is a stylized replica of the stone tablets on which the Ten Commandments, the Decalogue, were carved in ancient Aramaic by God and given to Moses on Mt. Sinai on the fiftieth day after the Exodus of the Jews from Egypt. There is an indicator of lunar days underneath. The lunar phase indicator is vital for in this watch: it allows the owner to calculate Jewish holidays. This indicator makes it easy to track the beginning and end of lunar months.

Aficionados can examine the proprietary K 01-0 caliber through the sapphire glass on the back of the case. The Luah Shana Watch is a fine example of elegant watchmaking art: the bridges are decorated with ‘cotes de Geneve’, gold chatons support the jewels, and the facings on barrel wheel are perfectly polished. The Hebrew nature of the watch is reiterated by the Star of David engraved on the barrel wheel and decorated with blue enamel.

It takes a bit of effort to get used to telling time with the Luah Shana Watch. But the effort is rewarded with a special relationship with an unusual companion-watch, a watch whose unusual appearance emphasizes the wearer’s Jewish heritage