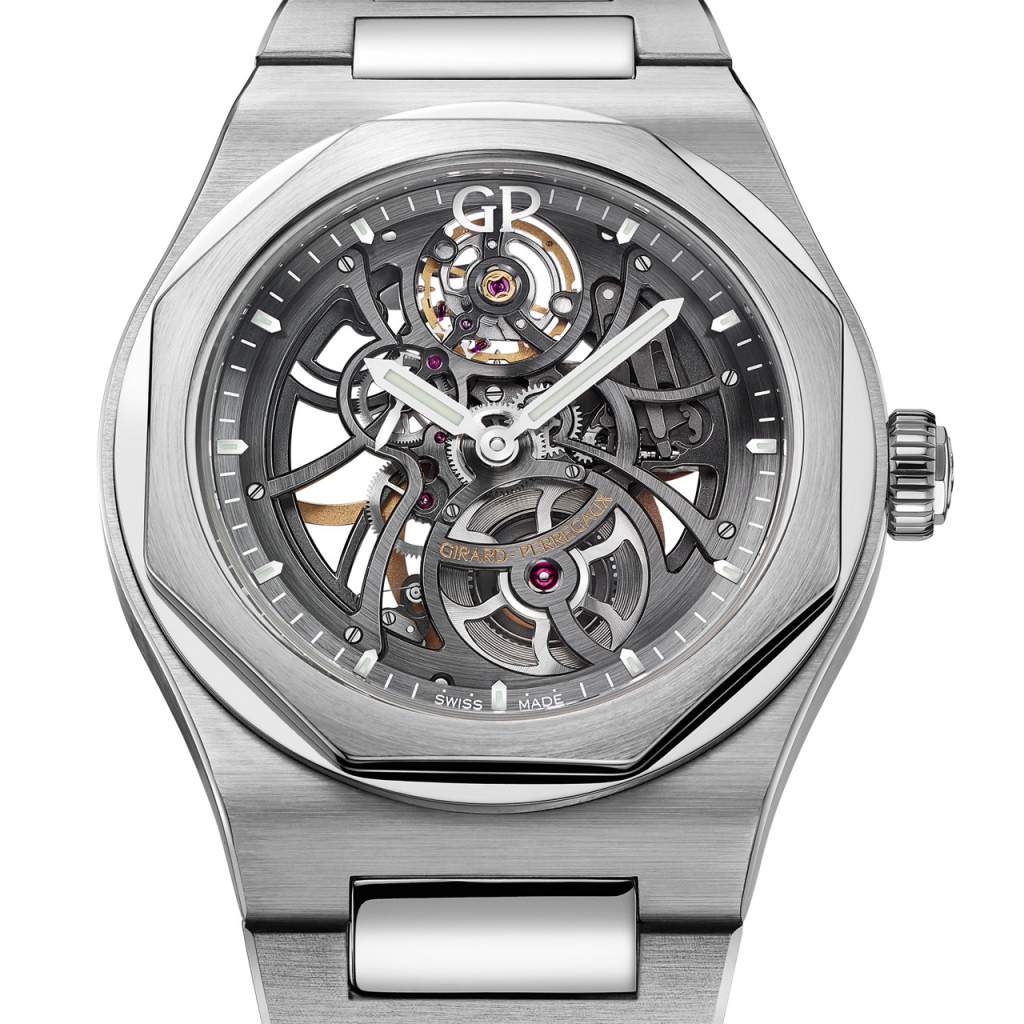 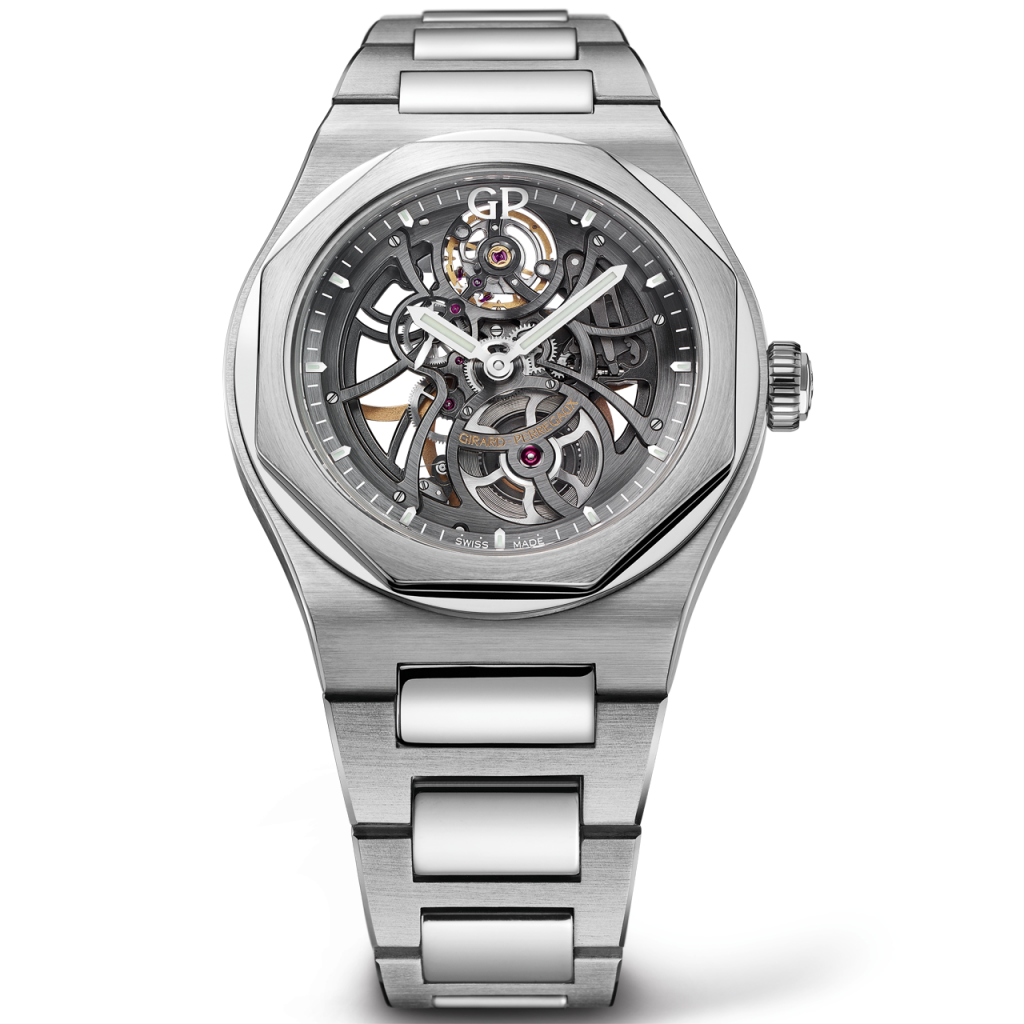 Solids and voids. Lines and curves. Interior and exterior. While these concerns are very much those of an architect, they undeniably define the Girard-Perregaux Laureato Skeleton. As the latest addition to the Laureato family, entirely rethought and richer than ever, this watch with a metal bracelet and a skeleton movement is an exercise in horological architecture. Girard-Perregaux has drawn upon the origins of the Laureato, upon the noblest inspirations and upon its horological expertise. The rigorous and sensual rhythm of the curves of the Laureato Skeleton give unique strength to an openworked watch in which the content harmoniously matches the container.

The Laureato was born under the finest auspices. Designed by a Milan-based architect in the 1970s, it immediately asserted itself as an object embodying a wealth of art, history and shapes: a true watchmaking icon. The spirit of this creation remains intact and is indeed enhanced in the latest Laureato generation that Girard-Perregaux launched in 2016 and is enriching in 2017. Its metal bracelet composed of links featuring alternating matt and satin-brushed surfaces; its case of which the lugs form an integral part of its design; its polished octagonal bezel framed by a circle: everything about it reveals a quest for balanced proportions and ergonomics. This approach to watch design has given rise to a distinctively styled and intense envelope, which protects and contains the functional organs – a vision identical to that of an architect. In this case, everything is concentrated within the few cubic centimetres of the Laureato Skeleton, which is viewed and experienced up close and personal, directly against the skin.

The Laureato Skeleton has an exterior and an interior. Much like the Guggenheim Museum in New York, by Frank Lloyd Wright, this interior and this exterior are engaged in constant dialogue. The envelope is a rigorously designed 42 mm-diameter, 10.88 mm-thick case, available in stainless steel or 18K pink gold, matching the bracelet. It is impeccably proportioned and composed of well-defined curves and clean-cut lines.

The content is a skeletonised Fine Watchmaking movement, Calibre GP01800-0006, forming veritable mechanical lace motifs. Positioned at 12 o’clock amid this elegantly filigree-worked metal structure is its balance, a reminder that the Laureato Skeleton is a living creation with a steadily beating heart. The excellent precision of this model is further reinforced – for the first time in a GP1800 movement – by the use of a variable-inertia balance.  Calibre GP01800-0006 is entirely developed, produced, finished and assembled within the walls of the Manufacture Girard-Perregaux. It drives the hours, minutes and small seconds in an openworked interpretation graced with exceptional finishing. It has undergone extensive skeleton craftsmanship. The bridges and mainplate are replaced by a clever interplay of solids and voids, alternating between the structural framework and inhabitable spaces, like the interior of a baroque-style Italian cathedral such as St. Peter’s Basilica in Rome.

The walls and columns are in this instance metal curves. The calibre is airy and yet perfectly solid. Like the Gateway Arch of St. Louis, Missouri, designed by Eero Saarinen, the Laureato Skeleton draws its strength from its transparency. This see-though nature is reinforced by the rotor carved from a block of 18K pink gold and openworked like the rest of the movement. This component that normally covers and conceals other elements thus allows the light to flood through the Laureato Skeleton like a stained-glass window. Instead of a dial, the movement is rimmed by suspended hour-markers. Like the Place de l’Etoile in Paris, they elegantly distribute the information provided by the watch.

The otherwise bare curves of this skeleton movement are adorned with chamfering that accentuates their outlines. They are hand-crafted by qualified artisans of the Manufacture Girard-Perregaux. The remaining surface of the movement is given a matt effect by satin brushing, creating a texture that catches and holds the light. The overall anthracite treatment gives a dark glow that sets the perfect finishing touch to the contrasting effects enlivening the Laureato Skeleton.

An intense, solid yet supple exterior. A graceful and sensual, yet structurally rigid interior. Luminous on the outside and dark inside. The Laureato Skeleton is a vector of emotions as well as functions. A construction echoing the intentions of Oscar Niemeyer when he created Brasília, the Brazilian capital. The Laureato Skeleton is designed to find its way unscathed through time and to testify through successive ages to the structural and technical mastery cultivated by Girard-Perregaux.