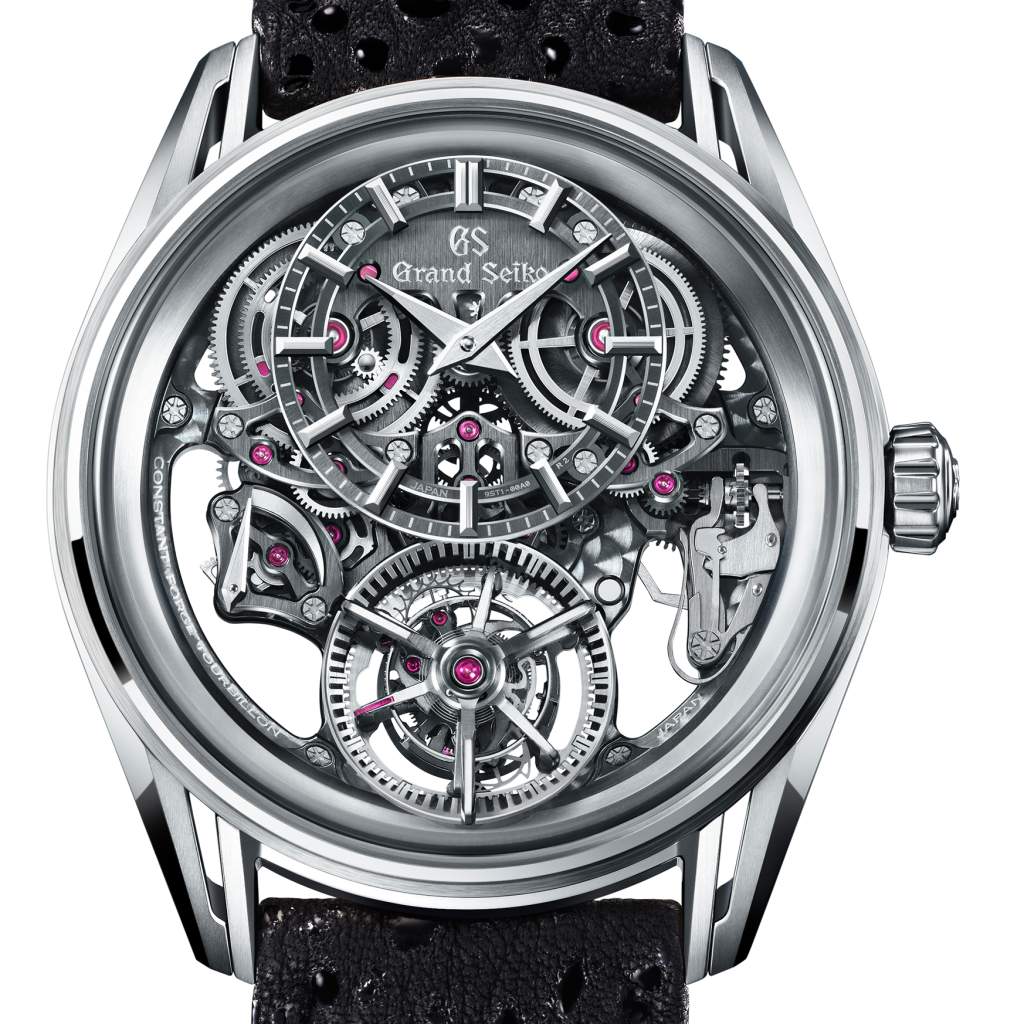 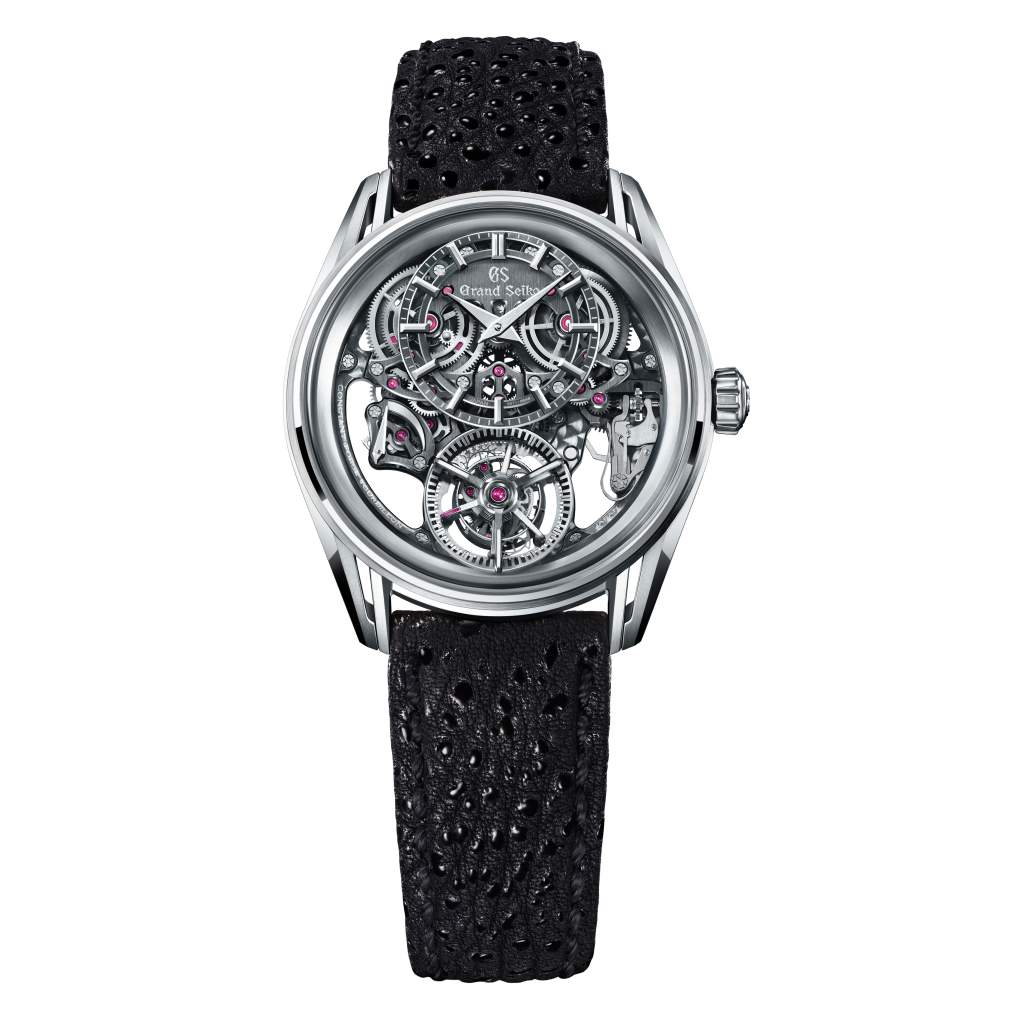 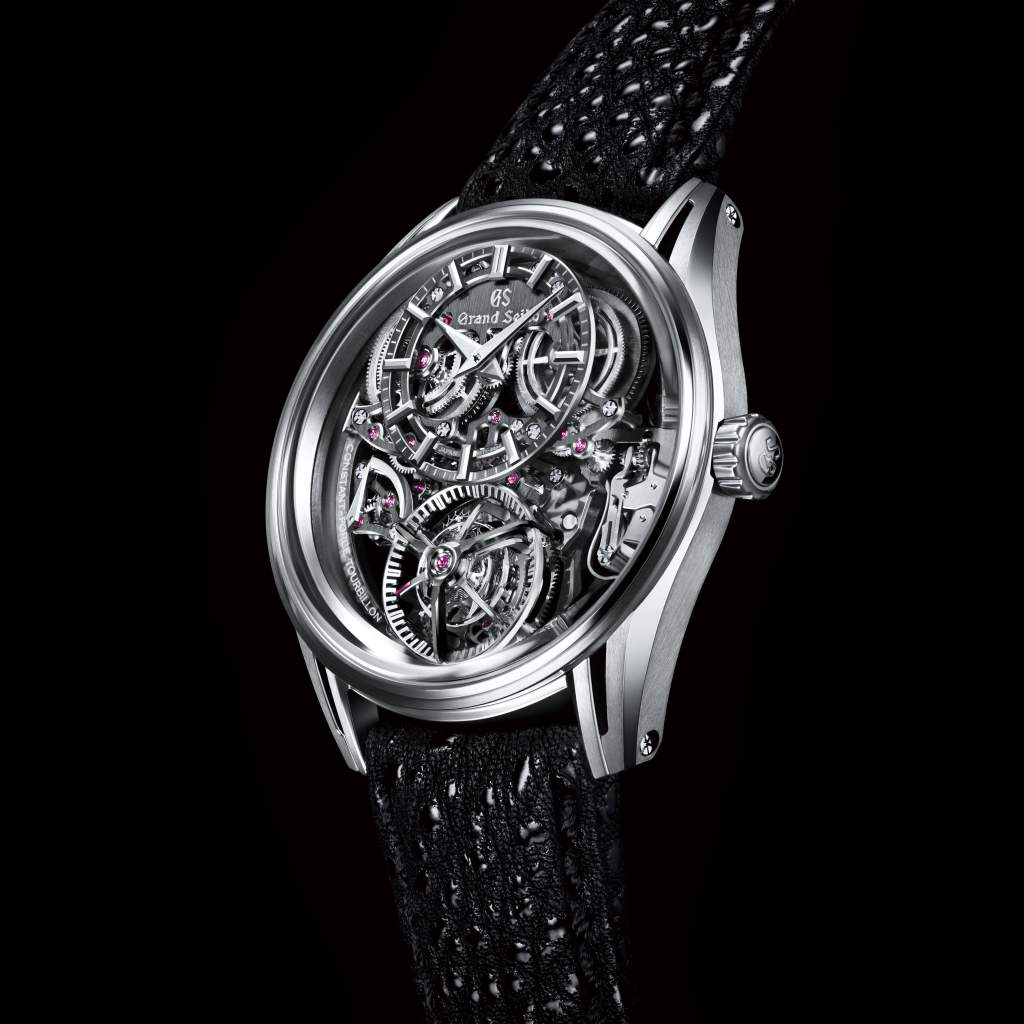 The Grand Seiko Kodo Constant-force Tourbillon is Grand Seiko’s first mechanical complication watch. At its heart is a uniquely innovative movement, Caliber 9ST1, which, for the very first time in horological history, combines a tourbillon and a constant-force mechanism as one unit on a single axis. The integration of the two mechanisms on the same axis allows for the torque to be transmitted from the constant-force mechanism to the balance without any loss or change, thus enhancing energy efficiency and achieving an unprecedented level of stable accuracy for Grand Seiko’s mechanical watchmaking.

Caliber 9ST1 sets a new standard of accuracy, to be known as the Grand Seiko Standard for Constant-force, in which each movement is tested for a full 48 hours in each of six positions and at three temperatures. This is twice as long as the Grand Seiko and industry standard. Each movement is assessed over the course of 34 days to verify its accuracy, and when the tests are completed and this new standard has been met or exceeded, the performance characteristics of each movement are defined in the individual certificate provided with every watch.

The watch is named Kodo, or ‘heartbeat’ in Japanese, after the unique motion of the two mechanisms and the sound of the rhythm it makes. The inner tourbillon carriage rotates smoothly as the balance steadily vibrates at 8-beats per second and the outer constant-force carriage follows its rotation at exact one-second intervals to create a precise rhythm that in musical terminology resembles a 16th note feel or semiquaver. The unique sound quality of the watch is made possible by 9ST1 being the movement with the highest frequency* ever to incorporate a constant-force mechanism. *as of February 2022, based on Grand Seiko’s research.

The case line and profile are in every way true to Grand Seiko’s design heritage. However, the watch uses some bold designs, such as providing space in the lugs. The case is constructed of both Platinum 950 and Grand Seiko’s Brilliant Hard Titanium to achieve a long-lasting beauty. Some case parts of both materials are Zaratsu polished to a distortion-free mirror finish, while others have a hairline finish; both processes are done entirely by hand by the most highly skilled craftsmen to ensure that each watch is visually pleasing from every angle.

The Kodo is offered with a specially processed calf strap made from an extremely durable material called "Himeji Kurozan leather," which was used centuries ago to make samurai armor. The strap’s surface is painted by hand with Urushi lacquer in a multi-coating process that gives it a uniquely delicate sheen.

While this remarkable watch is in every way a new departure for Grand Seiko’s watchmaking, the practicality and legibility for which Grand Seiko is renowned is still realized in every detail. The constant-force carriage has a ruby on one arm, which acts as a small seconds hand. The watch incorporates a hacking function so that the rotating tourbillon carriage can be stopped when the crown is pulled out, allowing the time to be adjusted to the precise second. The hour hand has an extra facet at its tip, which creates a contrast with the minute hand and enhances the watch’s readability. In addition, it offers 10 bar water resistance.

The watch’s strap is certified by the Japan Eco Leather Standard and has a low environmental impact during the product life cycle. A certified Japan Eco Leather has the following requirements; it is made of genuine leather, does not incorporate carcinogenic dyes, is made in a factory that handles its wastewater and solid waste, and excludes substances harmful to health and the environment.