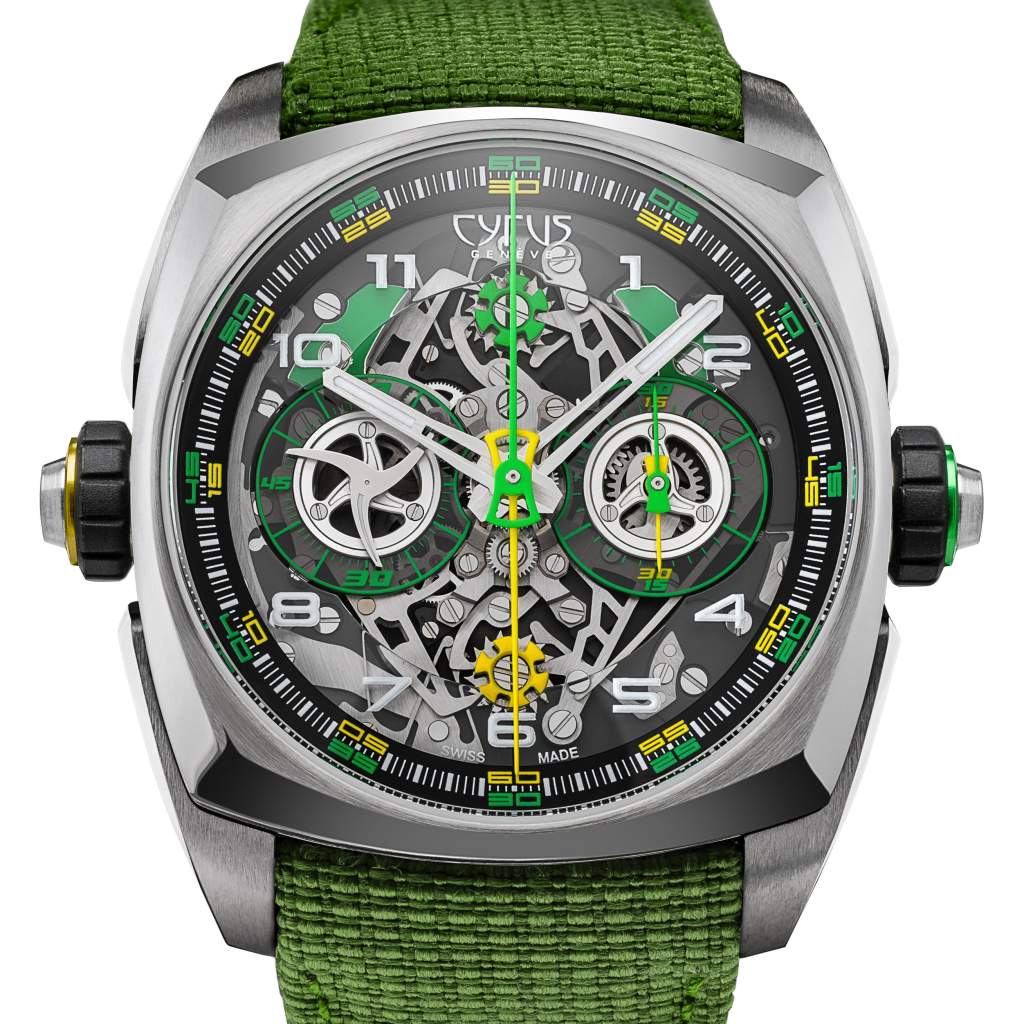 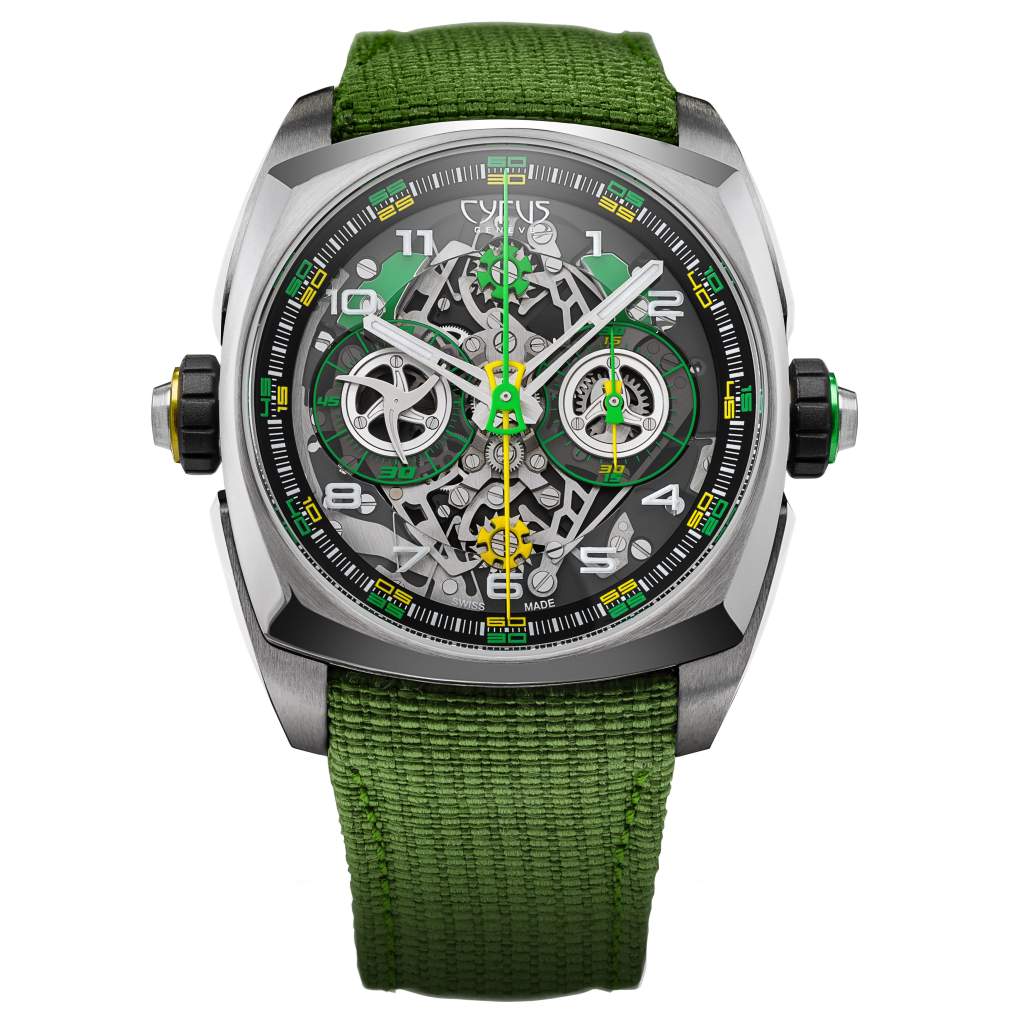 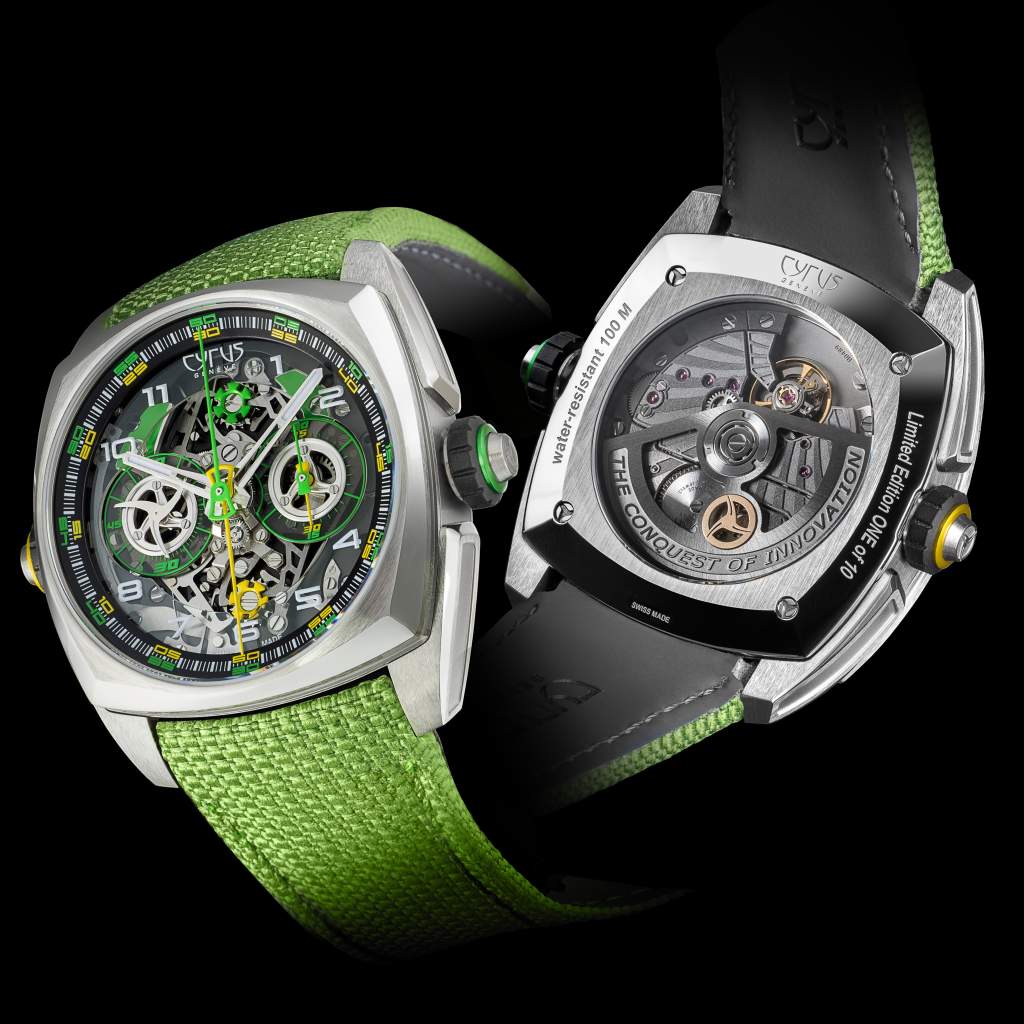 In 2021 CYRUS Genève unveiled  the  world’s first double independent monopusher chronograph christened KLEPCYS DICE DOUBLE INDEPENDENT CHRONOGRAPH EVOLUTION. Since 1873, when American watchmaker Arnold Frankfeld registered a similar mechanism for a pocket watch at New York’s patent office, no one else, before Cyrus Genève, as far as we know, has successfully met this challenge. On the occasion of Watches and Wonders 2022 this model  is sporting a new look with the latest KLEPCYS DICE LIME DOUBLE INDEPENDENT CHRONOGRAPH EVOLUTION.

With the KLEPCYS DICE, CYRUS Genève writes a new chapter in the history of the art of  watchmaking and specifically in the chronograph complication. For the first time, since 2021,  an innovative independent double chronograph is available on the market featuring one case, one movement, two independent chronographs.

Inspired by timing demands for sporting competitions, KLEPCYS DICE LIME (DICE is the acronym for Double Independent Chronograph Evolution) makes it a one-off in the vast landscape of contemporary watchmaking. It is equipped with two independent monopusher chronographs for measuring two short intervals of time independently or in synchrony, all housed in a single manufacture self-winding mechanical movement developed by master watchmaker Jean-François Mojon.

The KLEPCYS DICE LIME DOUBLE INDEPENDENT CHRONOGRAPH EVOLUTION comes in its iconic cushion-shaped case, crafted from natural grade 5 titanium with a polished/satin finish, water resistant to 10 ATM and is a limited edition of 10 pieces. Given the amount of space occupied by this unusual calibre, with two mainplates and as many chronographic modules, the size is actually limited, with a diameter of 42 mm and a thickness of 16.5 mm.

The 3D architecture of the open-worked display is key in all the Swiss Maison’s watches.  It is a meditated approach, and designed to allow the chronograph mechanism to be seen in action from the dial side, from which the two column wheels are clearly visible.

The elapsed times recorded by the two chronographs can be read off at a glance, thanks to the two-colour scheme which CYRUS Genève has adopted in dazzling green and intense yellow. Both hues feature on the two hands of the chronograph counter at 3 o’clock, on the double-scale flange around the dial, on the column wheels and the respective crowns. The chrono minute and second hands are specular. The first chronograph is picked out in green; the crown set at 3 o’clock starts, stops and resets it to 12 o’clock. The second chronograph is set with the pusher on the crown at 9 o’clock; it is highlighted in yellow, and resets to 6 o’clock.

Hours and minutes are indicated on a bevelled, anti-reflective sapphire crystal ring and are luminescent as well as the hands. The small seconds are placed at 9, with an original hand which recalls the Maison’s logo: a three-armed helix with a luminescent tip.

The CYR718 automatic calibre, developed by Jean-François Mojon,  which powers the KLEPCYS DICE LIME DOUBLE INDEPENDENT CHRONOGRAPH EVOLUTION, features two identical chronograph mechanisms visible on the dial side, as the movement has been reversed. The symmetrical design offers a fascinating view of the two column wheels that are the "heart" of this complication.

The two mainplates of this innovative mechanism are finished with a black microbeaded PVD treatment. The additional module for the two independent chronographs is made up of 218 components, all mounted on the two mainplates. With 443 components in total, the mechanism beats at 28,800 vibrations/hour, and the single barrel delivers a 60-hour power reserve.

The activation of chronograph levers generates considerable shocks and dispersion of energy, especially during the return-to-zero phase when the hammer on the heart cam is activated.

Thanks to a special system of insulation, which ensures precision measurements for the duration of the event, these shocks have no repercussions on the display of the functions. In short, the two chronographs function independently without exerting any influence on one another.

The motion work mechanism that carries the hours and minutes hands also required special attention. Conventionally, this mechanism is composed of several gears placed on different rotational axes. However, to free up as much space as possible for the dual chronograph complication, Mojon came up with a concentric mechanism for the motion work. Not only is the mechanism more compact, but it is coaxial to the axes of the hands.