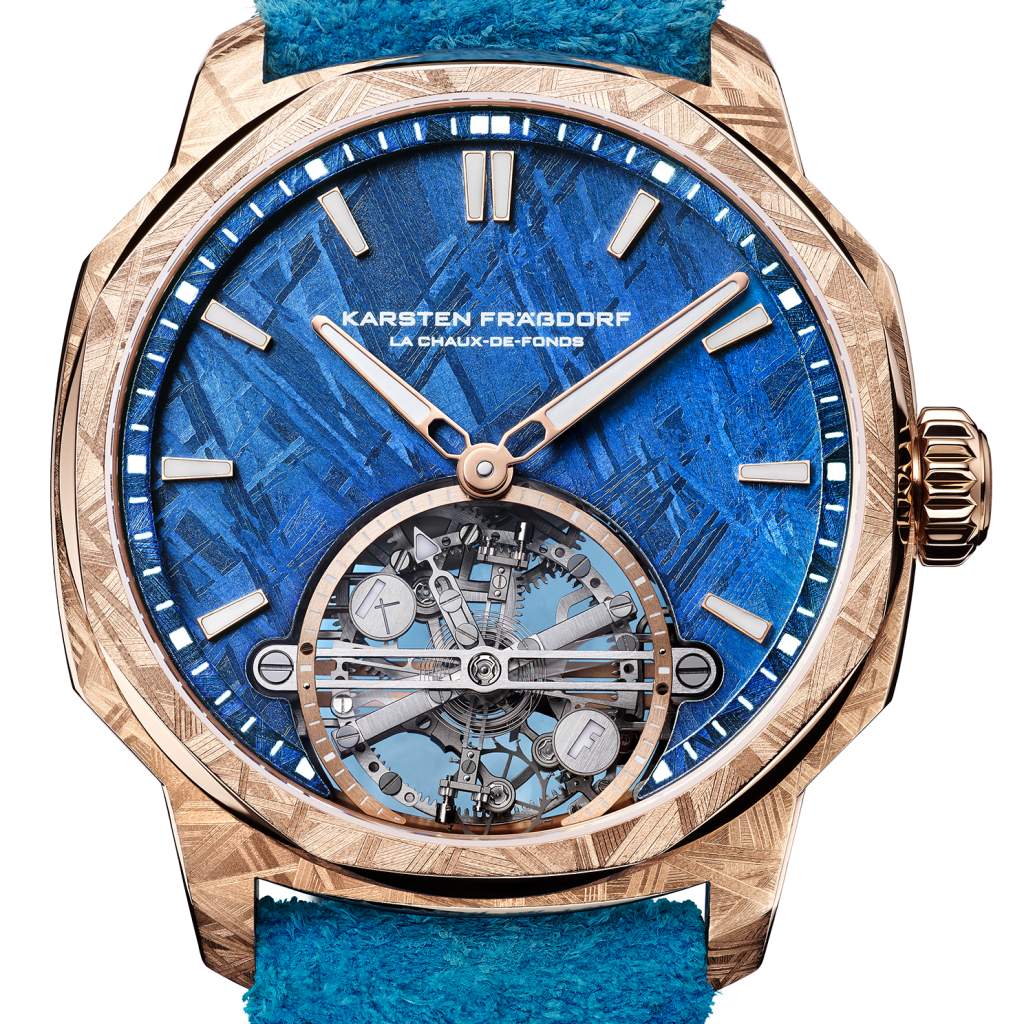 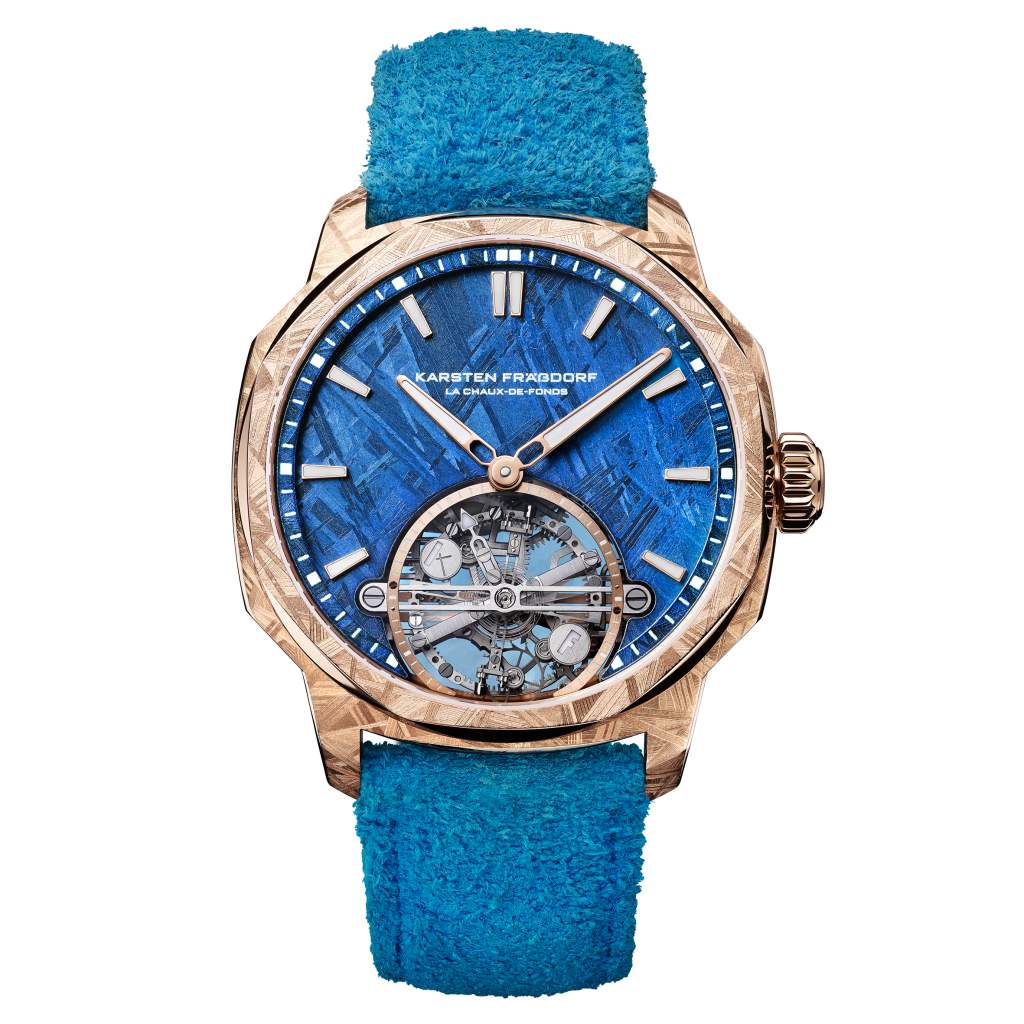 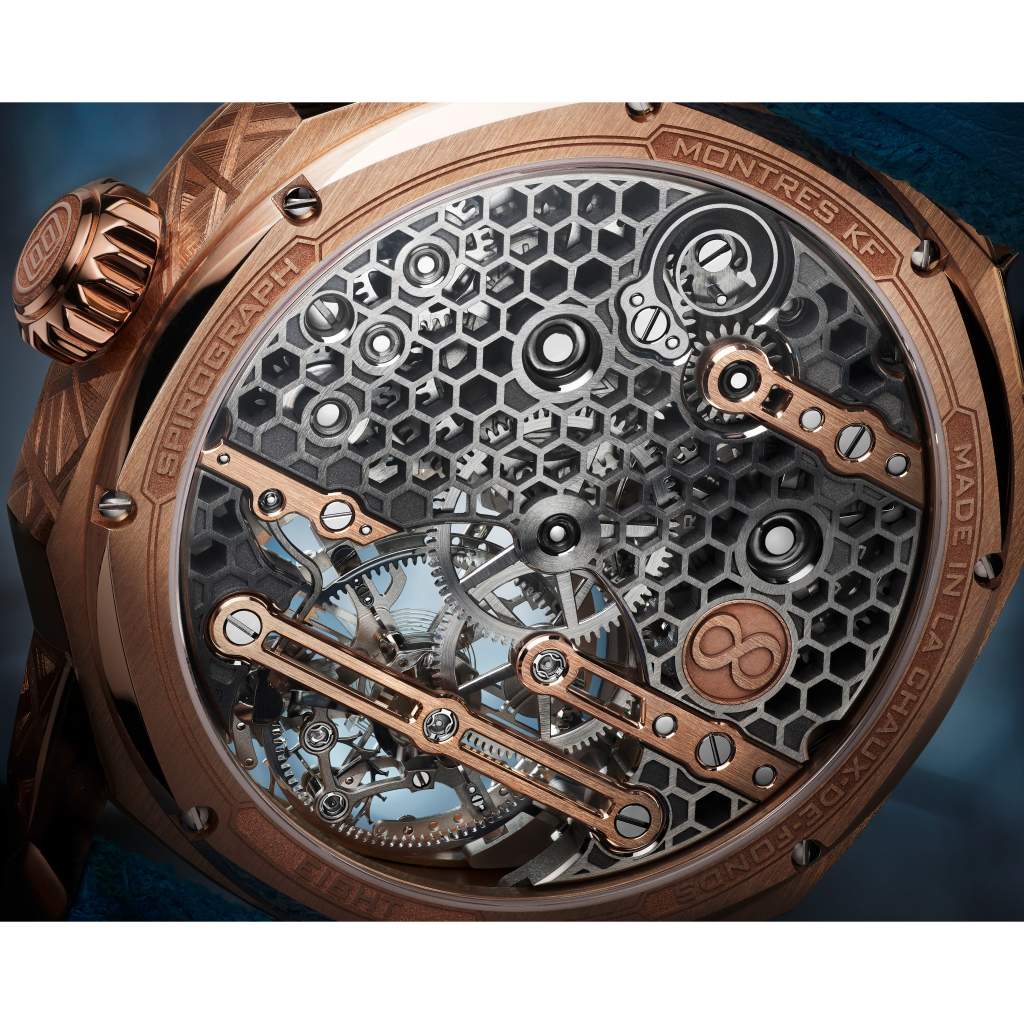 Highlighting the latest EI8HT and its Novamag® 01 calibre

The octagonal shape of this singular case determined the name of the KF models: EI8HT.

The pink gold case features motifs borrowed from the meteorite dial. Hand-engraved in a play on alternating polished and decorated surfaces, this perfectly ergonomic case lays the foundations for an iconic design. This sleek and powerful 44.5 mm-diameter timepiece features a tourbillon cage that is dizzying in terms of both its size and the transparency of its mechanism.

On the dial, the unique aesthetics of the meteorite – a fragment of cosmic matter – are expressed in blue shades echoing the colours of the strap.

The movement can be seen through the transparent sapphire crystal caseback. The mechanism is all the more visible in that it is built on pillars enabling it to fit even more closely to the glass on the back of the watch. True to its precision timekeeping aspirations, the Novamag® 01 calibre gives pride of place to the tourbillon function. Visible through a large opening at 6 o’clock, this one-minute tourbillon is equipped with an escapement 100% designed and developed by Montres KF, as is the rest of the movement powering it.

The result of this approach is a watch meeting the criteria of reinforced anti-magnetism and entirely made in La Chaux-de-Fonds. The tourbillon and balance-stop functions are naturally accompanied by the indication of the hours and minutes displayed on the dial, while the seconds tick past on the tourbillon cage.

This calibre has been designed and built around its balance to meet the standards of pure chronometric performance: an extremely rare event in the industry. To achieve this, Karsten Frässdorf, inventor of the Spirograph® balance, has registered no less than five patents. This distinctive balance enabling adjustment by inertia and thermo-compensation is accompanied by a balance-spring fitted with a Grossman inner curve and a Phillips outer curve.

This tourbillon mechanism, which is intended to be an everyday instrument, is water-resistant to 50 metres. It beats at the rate of 18,000 vibrations per hour, thereby guaranteeing optimal chronometric precision.

Equipped with a twin barrel, this durable movement boasts an 84-hour power reserve theoretically enabling the watch to run for this period of time without needing to be manually wound via the crown. However, to improve chronometric precision, this autonomy is deliberately reduced to 66 hours by means of a “Maltese cross” stopwork mechanism guaranteeing a more stable driving force.

In response to technological developments, this new movement is setting new standards in terms of resistance to magnetic fields – an important criterion when choosing a tourbillon, which is also endowed with an inherently magnetic meteorite dial. The Novamag® 01 calibre thus maintains its accuracy regardless of its environment. The reinforced anti-magnetism characteristic of KF complies with the ISO 764-2020 established in 2020, as implied by its code-name. This means that not only the escapement, but the entire movement – and more generally the watch as a whole – are endowed with enhanced anti-magnetic properties.

Since the creation of the Maison, each timepiece has been designed according to the desires of its purchaser according to the ‘‘Bespoke only’’ concept. The aesthetics of this new complication can thus be completely personalised.