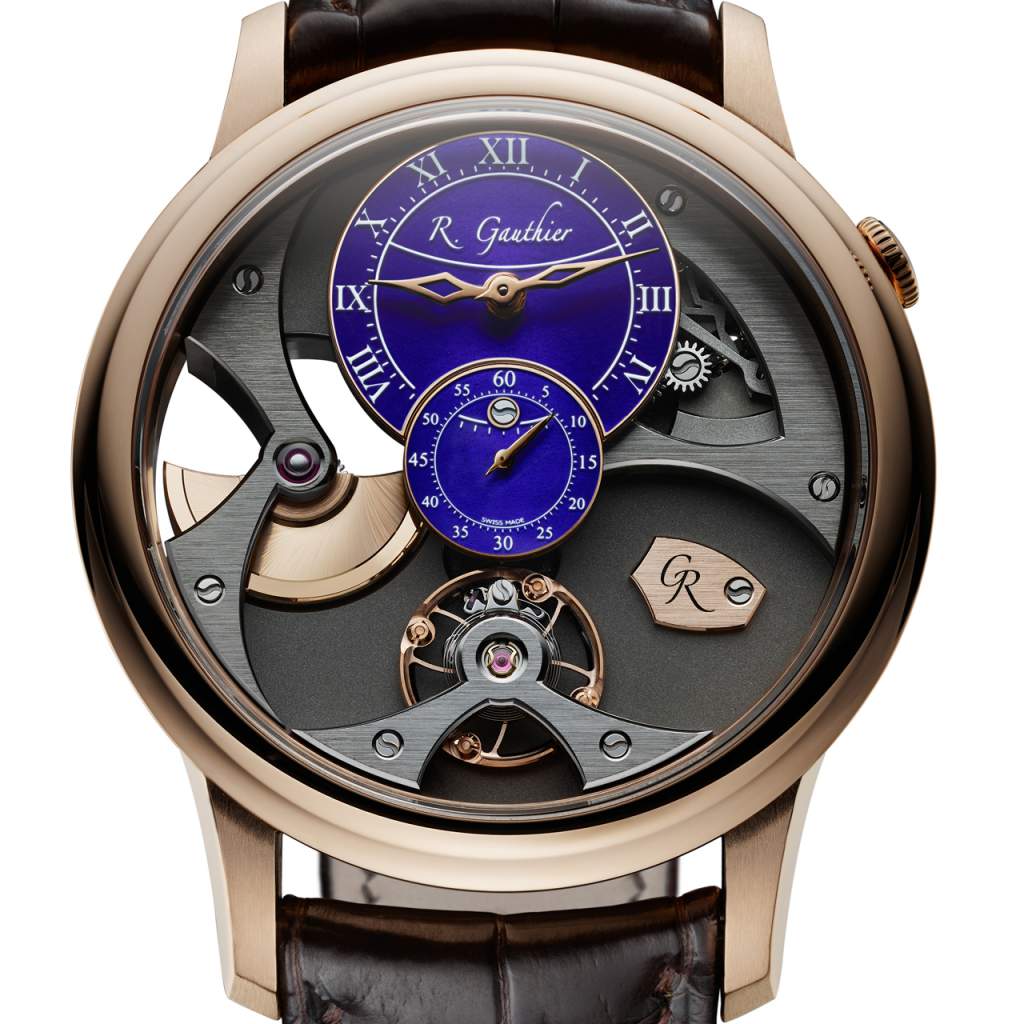 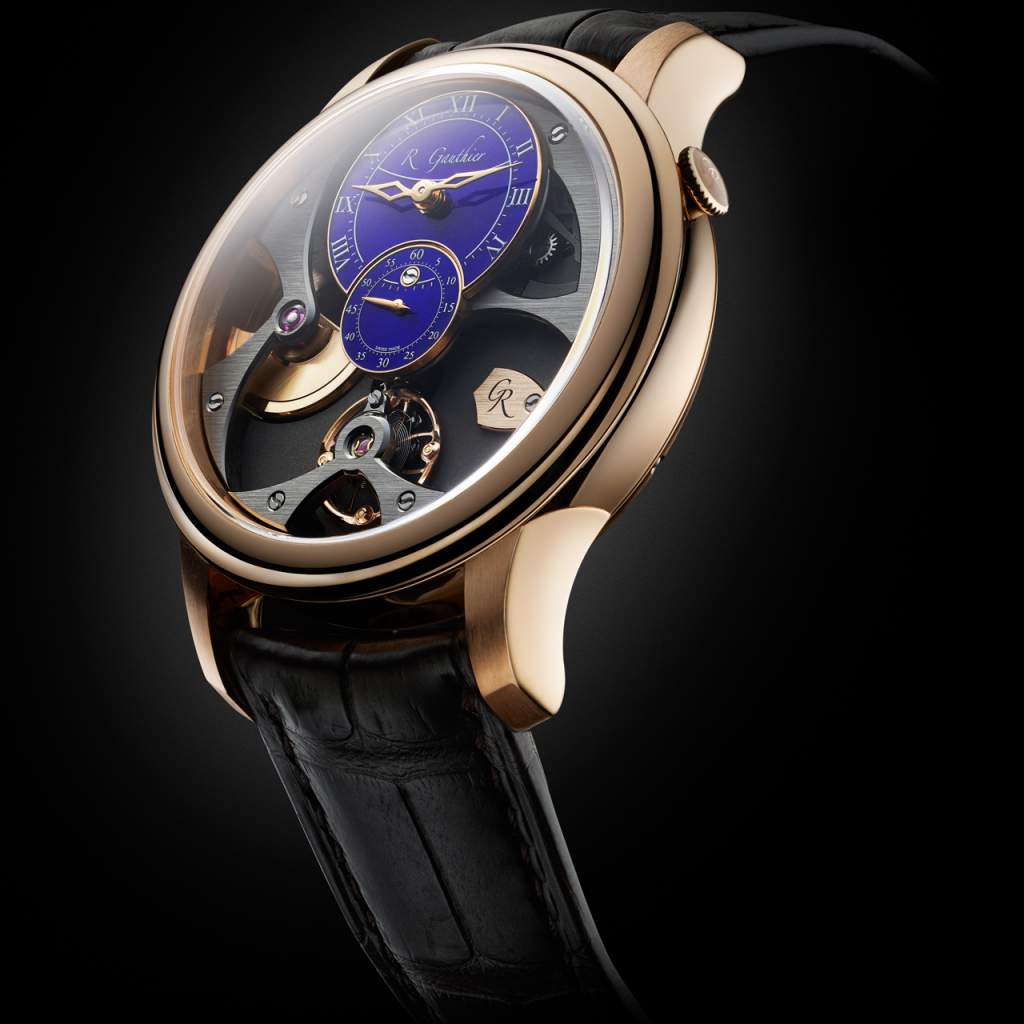 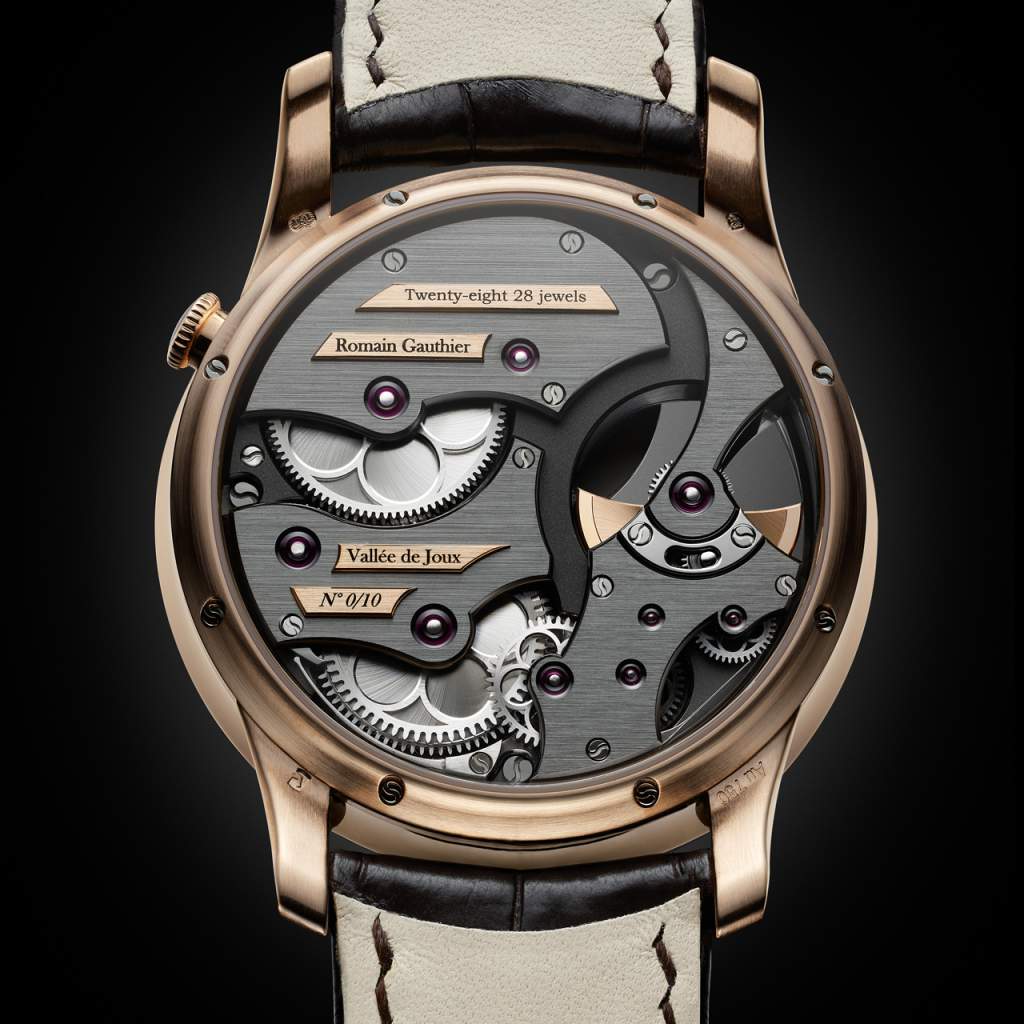 Efficiency has never looked so elegant

With Insight Micro-Rotor, Romain Gauthier has created a high-end, automatic timepiece that offers the best of all worlds: Elegance and efficiency, precision and power, simplicity and splendour.

Insight Micro-Rotor’s hour, minute and small second indications are powered by a beautifully hand-finished, in-house calibre built from the ground up and boasting bidirectional micro-rotor made from 22k solid gold. This compact oscillating weight – visible dial side and through the display back – turns fluidly and noiselessly between two bridges, each fitted with a friction-minimising, wear-resistant ruby bearing.

However subtly and in whichever direction the micro-rotor swings, it is working away, winding a double mainspring barrel that, when fully wound, offers a generous 80 hours of power. The two barrels are in series for more constant power to the regulator, meaning the movement’s rate holds up whatever the state of wind.

It is not just the mechanical efficiency that is elegant: Insight Micro-Rotor’s open dial is a harmonious picture of details, depth and mesmerising animation. Sweeping around the centre are the small seconds surrounded by the hour-minute subdial at 12 o’clock, beating balance at 6 o’clock and, at 9 o’clock, the swaying micro-rotor, the latter framed within a remarkable void created by a circular cut-out in the mainplate. A plaquette with Romain Gauthier logo provides a smart visual counterpoint to the micro-rotor, while the curvaceous, hand-bevelled bridges evenly spaced around the periphery glint in the light, their arcs marrying with the inner contours of the case.

The observer is treated to more views of the movement through the display back. Here the micro-rotor continues to steal the show as it sets the visible train of gears in motion, starting with the reversing gear that lends the mechanism its bidirectionality. The gears and ratchets stand out for their circular arms that feature eye-catching bevels. Meanwhile, the bridges are decorated with hand-made, hand polished bevels and jewel countersinks and are fixed in place using Romain Gauthier’s signature screws with aesthetic S-slot. The sinuosity of the bridges is superbly counterpoised by the four linear plaquettes adorning them.

Romain Gauthier has designed Insight Micro-Rotor’s movement to be highly visible so the viewer can gain an instant appreciation of the spectacular mechanics and fine finishing, giving rise to the name “Insight”.

“Insight Micro-Rotor is a haute horlogerie creation, but also a daily timepiece that can be enjoyed for its simplicity of use,” explains Gauthier. “You can wear it every weekday and almost forget that you have it. It’s very comfortable to wear, and the micro-rotor winds the barrels quickly, efficiently and silently so you don’t have to worry about winding them by hand. You can take Insight Micro-Rotor off Friday evening, put it on again Monday, and there will still be enough power stored with precision guaranteed.”

Why an automatic timepiece with micro-rotor?
Romain Gauthier’s first in-house calibres feature ‘flat’ caseback crown (Prestige HM and Prestige HMS) and caseband winding pusher (Logical One), thoroughly original mechanisms that increase winding efficiency and provide a certain aesthetic and tactility. Designing and building a movement that boasts a bidirectional micro-rotor is in keeping with Gauthier’s haute horlogerie ethos of developing daring, in-house movements from scratch, as well as with his quest to create atypical, ultra-efficient winding mechanisms.

Why this particular micro-rotor system?

In automatic watches, a bidirectional micro-rotor converts kinetic energy – motion from the wearer’s arm – into potential energy for the mainspring, no matter the direction the micro-rotor is turning in. It is this efficiency that appealed to Romain Gauthier when he designed Insight Micro-Rotor. This should come as little surprise: Gauthier is a qualified constructor of precision machinery who brings, among many qualities, an engineer’s approach to his designs for the brand’s in-house movements.

Gauthier has designed the micro-rotor so that it turns between two bridges, each fitted with a ruby bearing, thus harnessing the watchmaking principle of avoiding metal against metal by putting metal against ruby. Rubies have a low coefficient of friction and high wear resistance, here helping to produce a smooth, inaudible rotation of the micro-rotor compared to, say, metal ball-bearings which can entail noise and wear.

Given the relative weight of the micro-rotor (3.86g/0.14oz), Gauthier decided to eschew a ‘flying’ rotor supported by just one bridge from beneath and instead design the micro-rotor so it is sandwiched between two bridges, from above and from below, for superior stability.

Insight Micro-Rotor’s movement was designed, developed, produced, decorated, assembled and regulated at Manufacture Romain Gauthier in the Vallée de Joux, Switzerland. The movement’s two mainspring barrels combine to offer 80 hours of energy at full wind. The barrels are in series for more constant power to the regulator that features the Romain Gauthier balance wheel with curved arms and calibrated eccentric weights plus hand-assembled pallet lever that is triangular for maximum rigidity. Chronometrically, Insight Micro-Rotor is very stable, falling well within the accepted tolerances of precision for haute horlogerie.

The 39.5mm diameter of the three-part case – caseband, bezel and back – makes Insight Micro-Rotor a perfect fit for both male and female wrists. The crown is placed at 2 o’clock to free up space for wrist movement. The soldered lugs gracefully meet with the caseband. And the bevel in the front sapphire crystal is another subtle design touch that helps to make Insight Micro-Rotor a horological tour de force.